I decided this week to add more functionality to the prototype and provide a base for the breadboard with the particle photon and MPU6050. The functionality that was added allowed the user to shake the dice to record the number that was just rolled; this would then allow the user to multiply that number with the other ones they roll until they do the shake action again. Before the exhibit, the functionality was implemented and shown in Unity to keep track of whether the value is correct. The other functionality was multiplying the number when the user throws the dice. I only focused on multiplying the last two rolls as users will start with learning the times tables which are only multiplying two numbers. Unfortunately, I was not able to get it to fully function as the two last rolls don't change when the user rolls the dice again after throwing it upwards. This means the particle photon has to keep being flashed after each throw. Apart from showing the answer in Unity, it is not used for anything else. If the prototype was to continue to be built the answer would be used to know which sounds to compare to the ones the user produces through hand gestures. The comparing of sounds to check similarity was believed to be the most difficult part and, therefore, it was not focused on for the fear it would take too long and not enough functionality would be created for a person to interact with it by the time it came to the exhibit. If I was to do it again, however, I would explore this area a bit more to see if it was possible or feasible rather than decide it could be simulated through the computer. This would have allowed users to currently interact with the prototype more and test the interactions, as well as see how easy it would have been for the target users to answer the question through movement and matching of tunes. The prototype I did create, however, was functional enough and allowed users to roll the dice, with the side lighting up and corresponding audio would play which was another important part for the users to be engaged and interested in multiplication through the visual and hearing representation. The users would also know which sounds respond to which number. For the foundation, balsa wood and the tape were used and stacked to make the sensors sit flat and stay in one position so that the measurements would be within the range of values stipulated in the code. These were the materials and resources I already had. This did make the breadboard with the particle photon and MPU6050 sit better, however, the ranges for the sides had to be changed because the numbers were no longer within range. In hindsight, I should have tried to find a more accurate and better way to determine the side rolled instead of using the raw numbers; however, the side was still detected most of the time, thus, improving it was not focused on because other parts or work needed to be done. 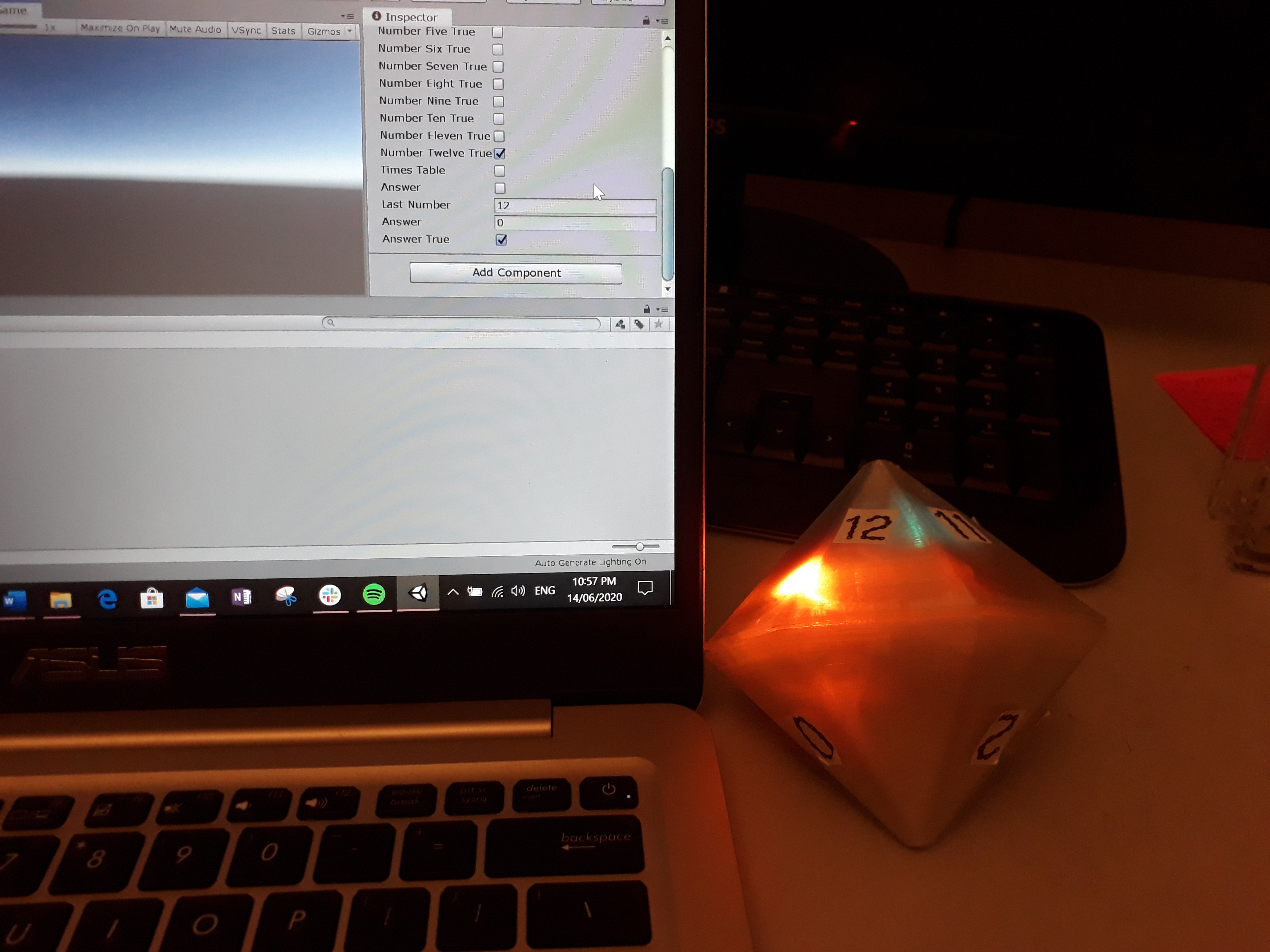 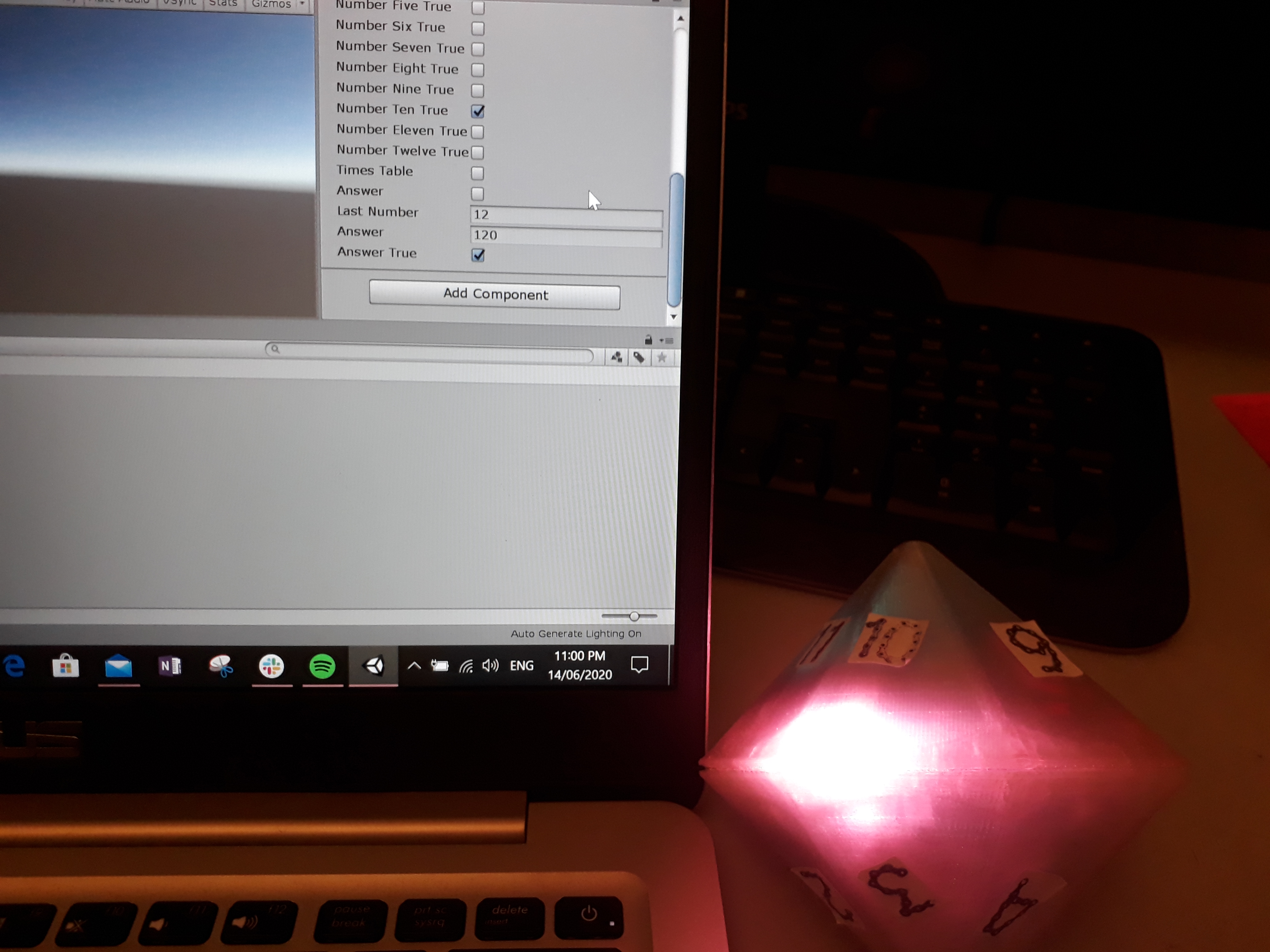 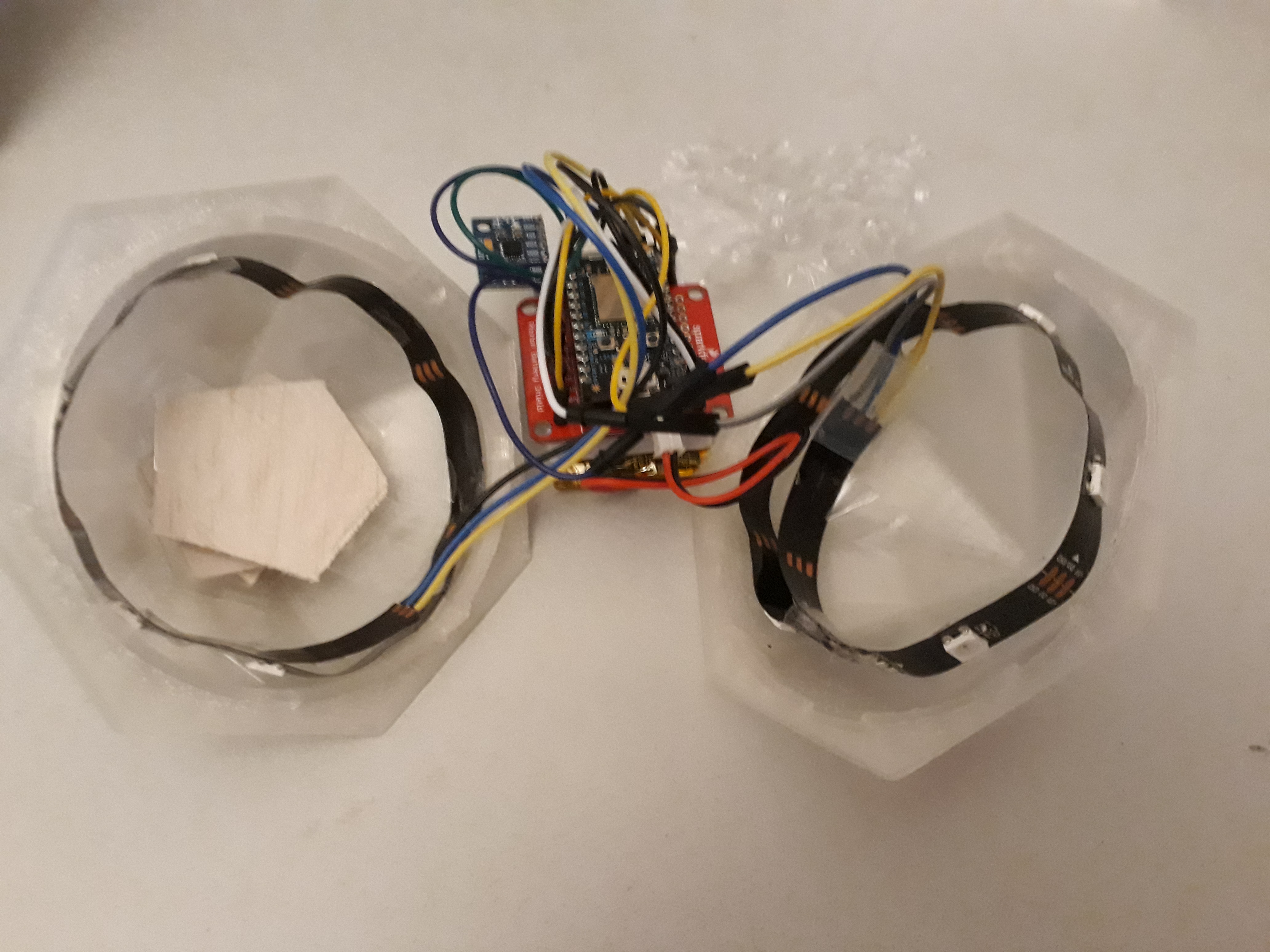 I was nervous about the exhibit because I had never attended an event like that online or been a part of one. People suddenly coming into the video chat worried me as I am a typically shy person and I find it extremely uncomfortable talking to people I have never met; however, I feel I am getting better compared to my first years as there have been times that a course has pushed me out of my comfort zones and given me more practice to talk to people I don't know. The exhibit, however, was interesting to be a part of and I found that it was a lot more enjoyable than expected as the team was there supporting each other. People who attended were also very nice and seemed generally interested in the prototypes that we created. We got a lot of positive feedback from people and some asked questions to further understand our concept as well as have a good chat with us that made me feel more at ease. The exhibit did allow me to see all my team member’s prototypes and see the complete functionality that they had done. I was very impressed and wished I could interact with them physically. I was also lucky to see another team’s prototypes. It is wonderful to see how much work people have put in and achieved especially given the circumstance.

There were parts of the exhibition that was frustrating as my prototype at different stages would stop working or would only work when the camera was not on. The video feed also kept freezing which meant that sometimes when I was demonstrating to people, they couldn’t see; however, everyone was very patient, and I was able to show them when the video was working again. I decided to try and fix the prototype during the exhibit which had varying degrees of success; however, it did allow some sides to function.

To make the exhibit more of a success I should have planned better for what exact information I would want the users to know to better understand the prototype and when to use the share the screen to allows users to see the different data change when certain interactions are done and, thus more interactions could have been shown; however, the concern there would be people who are not familiar with Unity might miss the change in data. I am happy, however, that I used the web camera to show the prototype instead of using the phone as I prefer to listen to the audio and see other people on the computer. There was also an issue with the other user not being able to hear very well or not always seeing the video when tested before the exhibit.

This week as mentioned before was also spent on finishing the portfolio. I am not completely happy with the styling as it is not responsive enough and, for some pages, the content was too chunky and very minimal styling done. I was able to break up the content by adding images and videos to show the different interactions with the dice; however, further styling would have improved the aesthetics of the layout.

What to do now

Now, I am focussing on finishing the report which I have yet to properly look at because I decided to have a slight break and focus on other courses with closer due dates. This course has been challenging but also very interesting, engaging and fun. I am a lot more confident with using the Arduino and now a particle photon, as well as creating circuits. I hope to continue learning and creating more projects with the different sensors I have used as well as experiment with others. Thank you to the teaching staff who have all been extremely helpful and knowledgeable which has made it a lot less stressful when it came to creating the prototype, making it functional and continuing with the whole course in general.