So I started polishing off my final build meaning that everything needed to be secured and made a little bit more durable so as to comfortably support someone's body weight. This meant a lot of hot gluing, threading, taping and adjusting the form of some of my colour pads. I also wanted to make it look a little nicer to the eye so I added in a white tarp and a large piece of cardboard to cover my wires (this was also done to avoid tripping hazards but the aesthetic touch was nice). 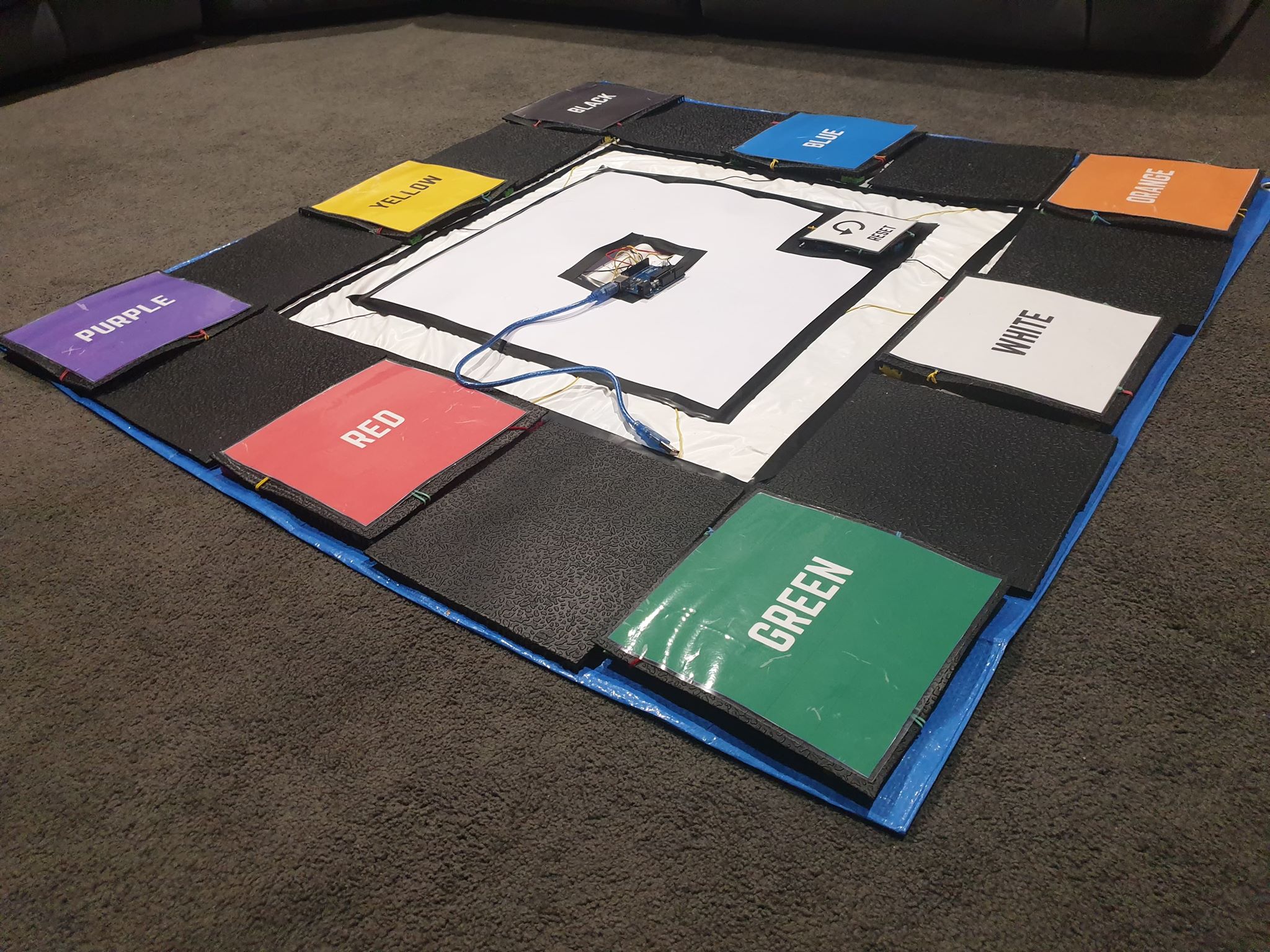 I am really happy with the form it is taking. There will need to be a few touch ups (I don't like the blue edges and everything could be straighter). Also the 'red' colour pad is proving rather finicky so that is definetely something to look into.

I am coming to dread these words. I found another bug in my code which essentially meant it would weight the first colour heavier then the subsequent mixes (ie red then blue would be more maroon while blue then red would be a deep blue). Not ideal for a colour mixing mat. So after a few hours of debugging I found that I had made an mistake in my logic and, after that, restarted work on my audio feedback. 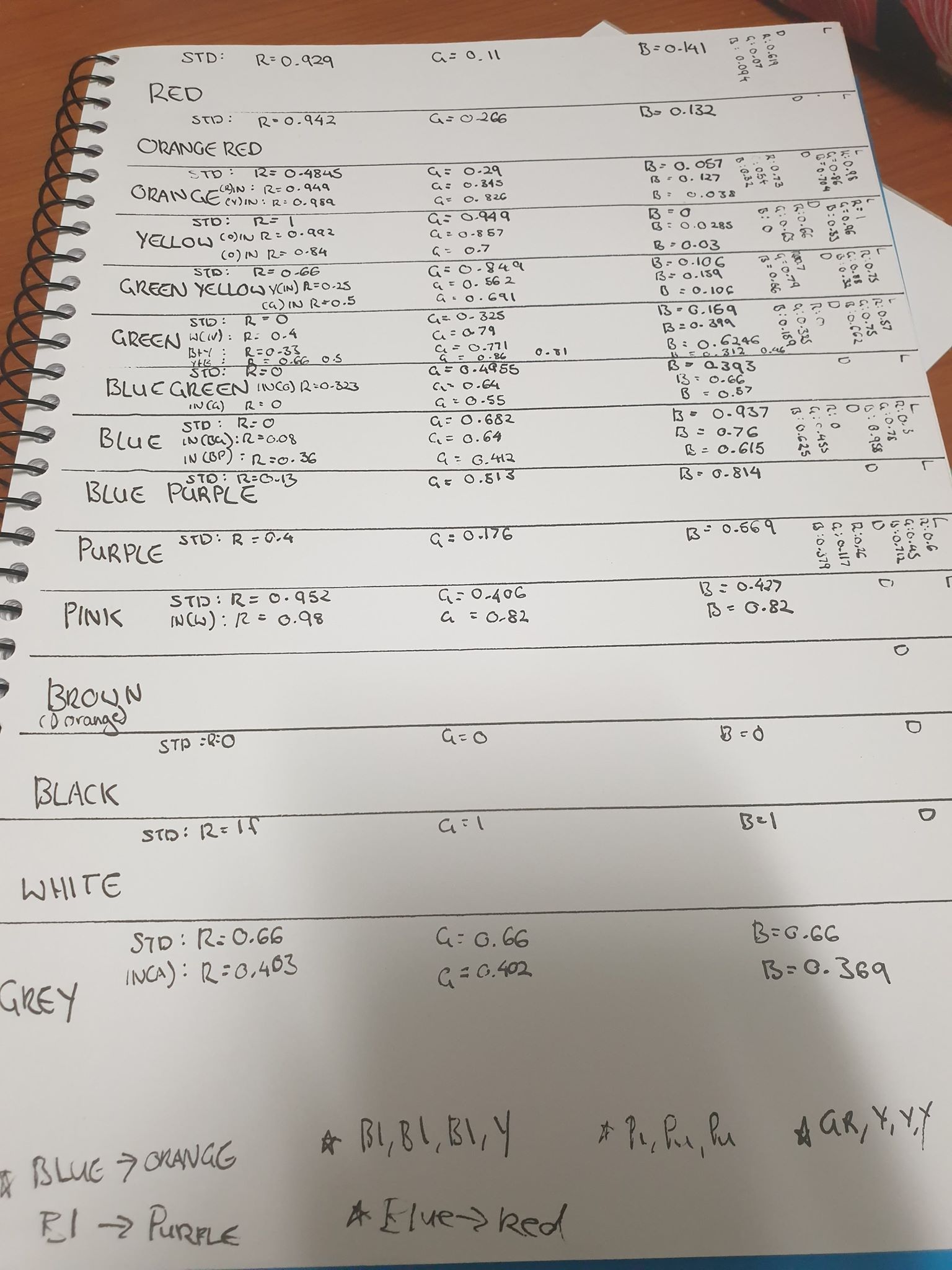 I pretty much started from scratch and decided that 15 colour ranges was the way to go. I started decided what the standard colour was and then deciding what I wanted the thresholds to be in comparision to that base.

This time I separated out tolerence ranges for lighter and darker versions of the base colour as trying to visualise and code for the logic of an entire colour on the spectrum proved too difficult to attempt in one threshold.

At the moment the audio feedback is pretty much finalised!! Very excited to be able to say that as it has been playing on my nerves quite a bit over the past few weeks. There is a little bit still to do for brown/grey colour thresholds but, other than that, we are golden!!

Below is a rendition of 'Starry Night' using Mixed as the medium, enjoy!!

Pretty happy with how the portfolio is going. It has all been written, it could benefit from some culling in words but I am content with the text to image ratio at the moment. The styling colour use some work, but I think I am on a good track at the moment. A test document is up and on the server so I am confident going forward with this piece of assessment

Before the exhibit I really would like to figure out how OBS works so that I can stream my digital interface and my physical interaction on Discord without too much hassale. The team want to have a meeting on Monday to go through our set ups and just have a general check in with eachother. We have also made significant progress on the team report which is really comforting because it means a lot less stress for us later.

REFLECTION: I was really really happy with how everything was coming together. I think putting in a lot of hard yards earlier on in the design process meant that my time to complete remaining tasks towards the end was more manageable.

I needed to force myself to sit down and go through the audio feedback for the mixed colour from start to end. I have found that sometimes, the best way to do something, is to just stick out the task in one sitting from start to end - no matter how mundane. It took hours to do, but I made it functional, and I was really glad that I just made myself do it rather than continuing to dance around the issue. It meant that I could fix any bugs and actually start to finalise my design and begin testing.

I really enjoyed making the portfolio. I have always loved web design, so designing my own graphics and making my written portfolio something to look at was a really rewarding endeavour. I think by the end, the visual-to-text ratio allowed the viewer to easily understand what was going on without having to read too much text. Sometimes I struggle to include visuals in my websites as I often can't nail the execution and think that they look tacky. Nevertheless, I think that Mixed struck a good balance!