Week 1 we began classes by looking at our expectations, fears, aspirations, questions and rumours we've heard about deco3850. We wrote all of these down on different whiteboards around the class and Lorna went through each of them

For rumours, I had heard from DECO2300 that we are using ARDUINO! This kind of scares me a little as for that course, I explored VR instead of Arduino, but I'll happily add onto aspirations that I'm keen to learn how to do build and code it. Speaking to other students, I have a better understanding that setting aside another 10 hours on top of the 10 contact hours is really important if we want to succeed in the course, so I've set up in my timetable a schedule to accommodate this.

We went through the Studio outline. We have our weekly journals, the project inspiration in Week 2, team project from Week 4 - 13, Exhibition on May 22 and portfolio and critical reflection due in the weeks following. Looking forward to the final products.

After running through the course outline, we began our project inspiration. I looked for ideas using Instagrams

I found some interesting things to do with touch and lighting, such as lighting which turns on and off with a tap, and graphical lighting that is generated when you play a note on a piano.

We then continued looking for examples of physical computing that either did or didn't fit the brief and posted it on slack.

For the Wednesday, our homework was to explore one of the seven HCI Grand Challenges. These are challenges for the future of Human-Computer Interaction Design.

My challenge was #7: Social Organisation and Democracy.

This challenge explores how HCI can benefit 'smart societies' and tackle problems such as jobs, poverty, environment issues and equality.

With the issue of sustainabilty, HCI should seek to be environmentally friendly in regards to what it is used for, and what the tech is made out of in a world where natural resources might be limited.

With the issue of social justice, technology should be designed to be as inclusive as possible, and not just to benefit one social class.

This extends onto active citizen participation whereby all citizens can use the technology. How to engage the citizens in impactful participation and encourage long term participation and inclusion is another challenge without overloading citizens with too much information. People within minority populations and low social classes also have a risk of being excluded.

Democracy is another issue that is explored and touches on the issue that the internet actually filters our ideas and shows us what we want to see, as opposed to getting views from the other side of the coin. We are prone to getting caught in a 'bubble'. If algorithms outside of Facebook were doing this, we are on a slippery slope to strong censorship and fake news. We want to maintain a diversity of views and insure AI can facilitate this.

Awais has made an experiment to help us come up with ideas for the project inspiration. Using a pack of playing cards and a cipher, we had to come up with some pretty wack ideas. The cards are associated with a sentence. A spade = Design to/for. A club = Place. A heart = Interaction Mode. A diamond = Interaction Quality.

Some ideas from the table we were on. You can see the sentences we made and from their ideated from 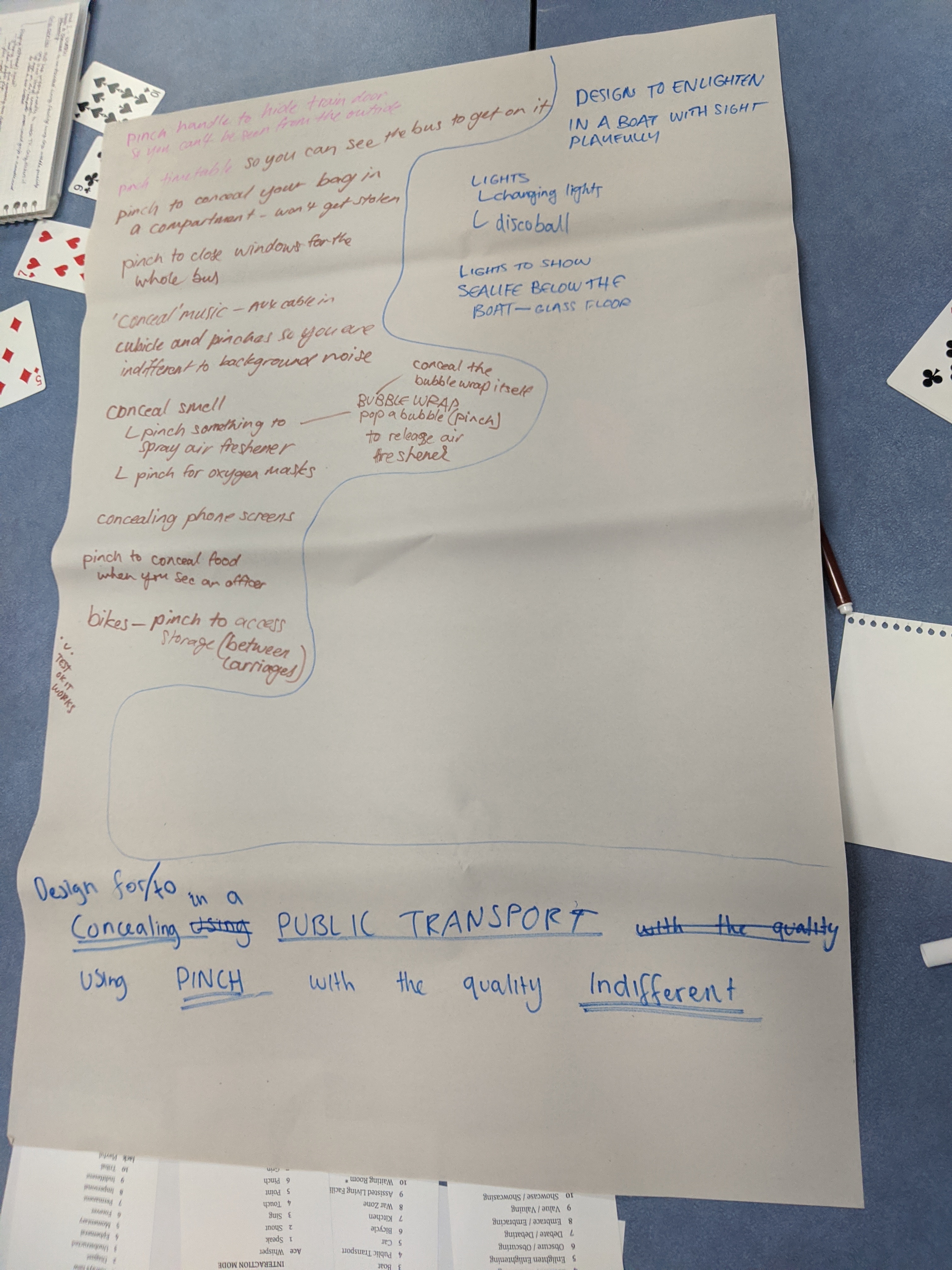 The cipher and cards and their corresponding meanings. 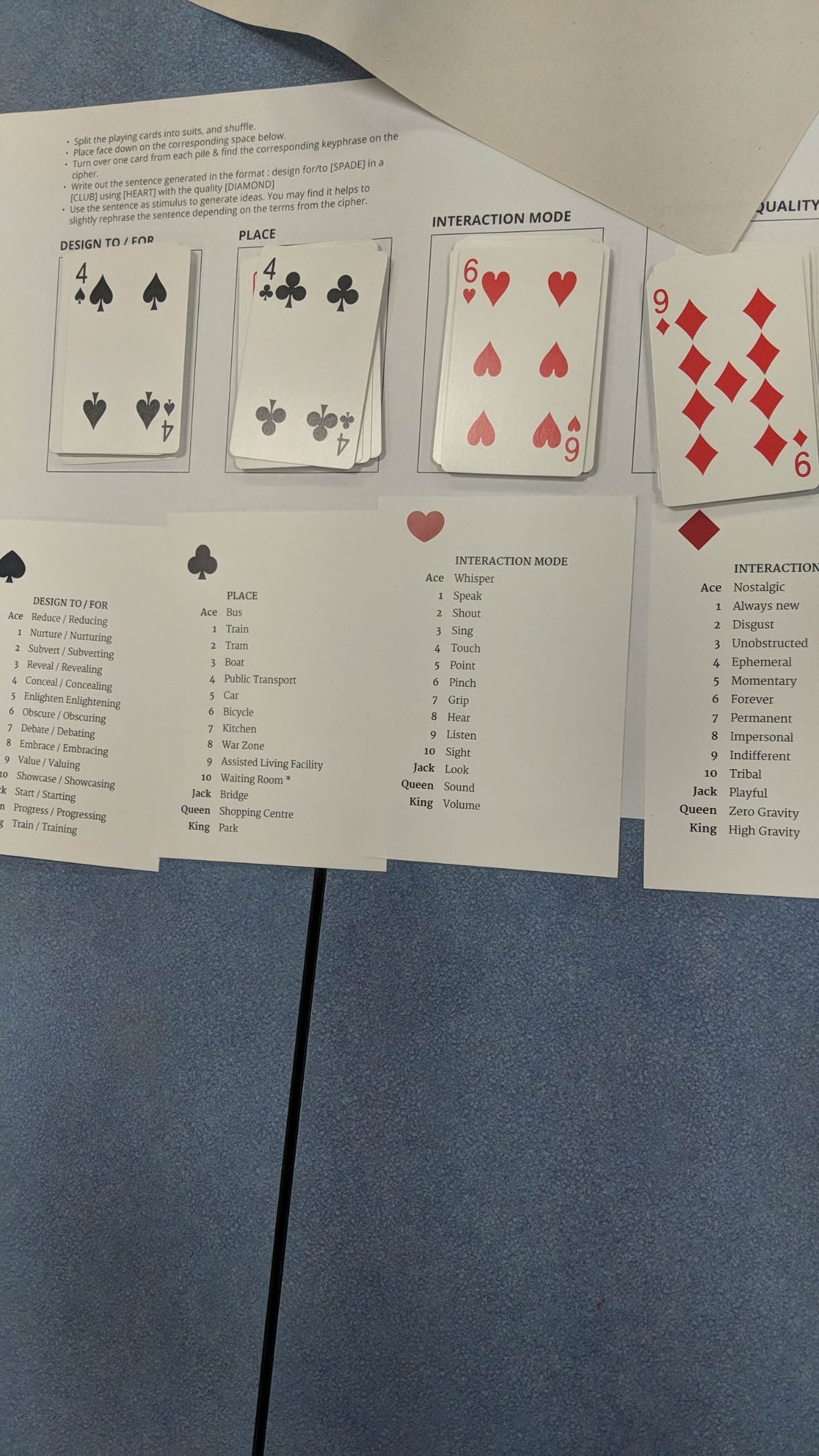 I actually found the experience quite fun and useful. I made up some things that I would have never even thought of before. We had a few rounds, the first few being individual and then as a table coming together and discussing our favourite ideas.

I came up with a musical synthesizer that turns your voice into song, which is powered by a dynamo as your are riding on your bike. The song is actually a debate you undertake with other riders, and you can playback said recordings forever.

A different take on it is to upload a set of 16 words / responses and having to debate using only those responses to satisfy the FOREVER quality as the responses cant be changed.

Another take is to have music from top 40 debated on a stage powered once again by a bike dynamo. As sustainabilty is a topic of FOREVER, and using a bike is sustainable, it satisfies the quality.

Changing the design from DEBATE to OBSCURING, I came up with this You obscure your real voice by song through bike power, and this becomes your new voice forever, like how darth vader speaks through his breathing mechanism.

Hide treasures in the park under a water display (similar to what you would see out the hotel in Las Vegas). The shooting jets of water are timed to the sound of song and hidden under the waterfall, you throw a coin and it is forever hidden.

Obscure your identity in a game where others have to find out your heritage. Select some songs which represent your background and enter this contest in an open environment, the park. Get up and sing, challenge fellow passers by and encourage them to sing. Meet new people and have a talk to them about their heritage and their FOREVER origins, whilst hearing some good music.

A public tribal performance that obscures the harsh realities of history to suit the needs of people with an agenda.

Some of the ideas from the table included

Design for training in a kitchen using a sound with the quality playful.

Pivoting on playful - each time the bin fills up, it plays a song that is dramatic. It could play - 'I don't feel so good' when the bin throws up some 'bad rubbish' that was put in the wrong bin.

If the compost was placed in the compost bin, it would play a happy sound. It can track who puts all the rubbish in the bin - who ever wasted the most has to empty it.

Another idea - a knife that talks to you. It has geometric and voice capabilities.

I think this course extends our thought process on top of our work in DECO3500 (ideation), DECO2300 (where we did journalling) and DECO2500 which got us in the process of posing the 'why' questions.

The work to do

I was inspired by the futuristic ideas and cipher game that opened up our thinking completely. When doing the cipher, I found that being restricted to certain qualities made me think about what quality would could generate more ideas in its place. So I ended up changing qualities from FOREVER to TRIBAL, to make the sentence Design for OBSCURING in a PARK using SING with the quality TRIBAL. I felt TRIBAL and singing had a good match