I believe these posts are meant to look at individual work over the week... but for the first week a large portion of our work revolved around group discussion.... so I'll include those activities while reflecting on what happened instead.

In general, the contacts felt quite short, I attribute this to some changes in habit that I made for this semester, primarily, writing when listening to course content.

Keeping my hands moving means I'm not getting distracted or disengaging, cause it demands more attention to get the content onto paper. The downside... feeling more fatigued after the fact than usual. Even with supplementary sugar it is a little draining to keep this up the whole way through.

The group activity on Tuesday involved breaking down concerns and expectations for the course, which to me was an opportunity to be clear about my intentions. In previous courses I'd simply go with the flow and work on whatever project the team decided on. This wasn't enjoyable, I have no interest or attachment to those projects after completing them after they were done.

To me, the activity was a chance to bring up things I was genuinely interested in, making it clear to potential teammates what I'm going for this semester.

Because the brief mentioned 'playfulness', the ideas I brought up were related to certain themes. It's hard for people to picture what social robots are, or how design fictions relate to existing spaces - in the past I found that if the idea is too abstract, potential table discussions quieten really quickly as everyone tunes out.

But if instead I say "I wanna build a giant robot" or "I want to make nightmares real", there's a chance to start a discussion as people try to figure out what those things mean.

While I think this comes off as pretentious, we did end up finding some common threads and general goals to bring forward to the classwide discussion. 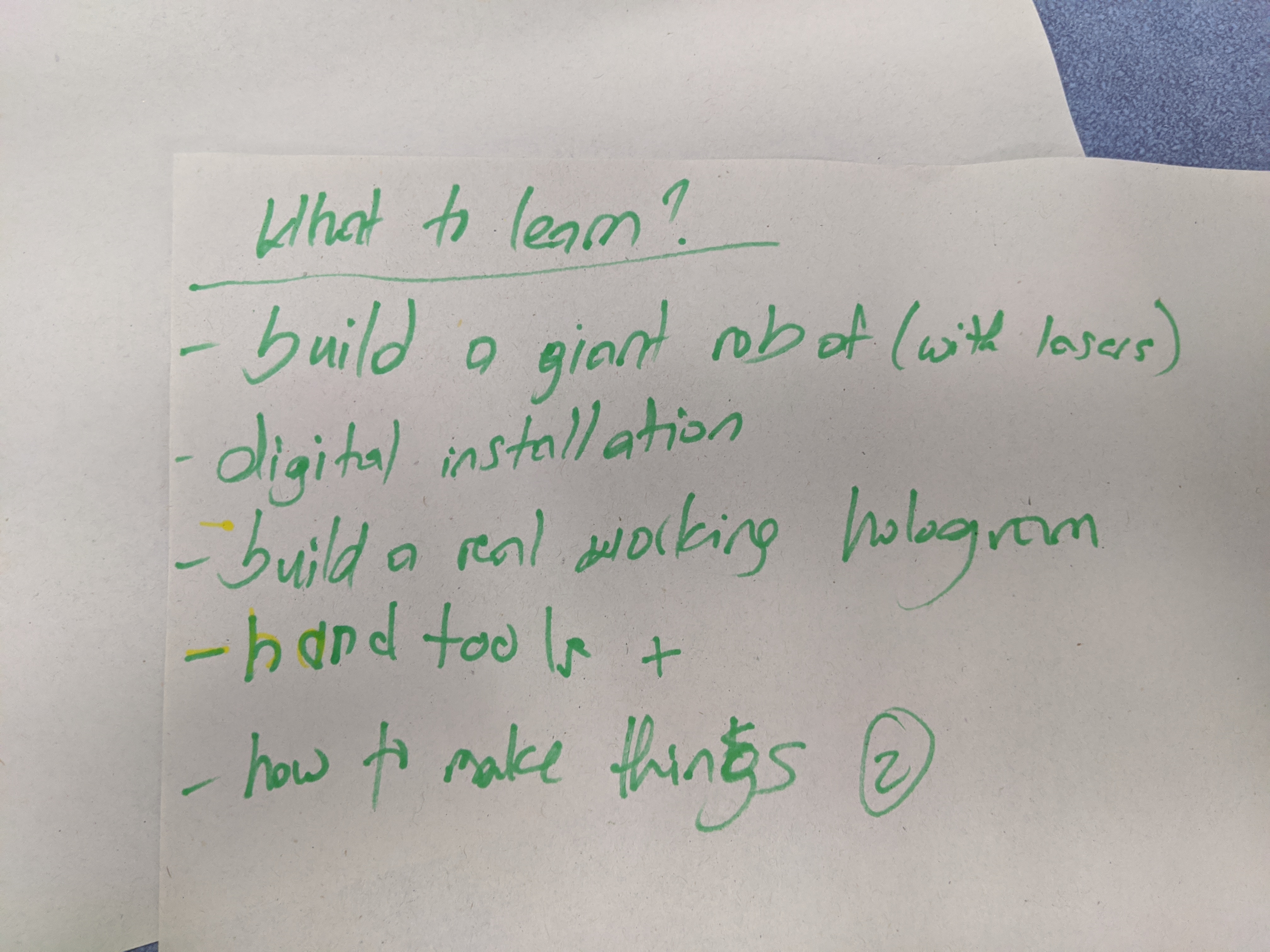 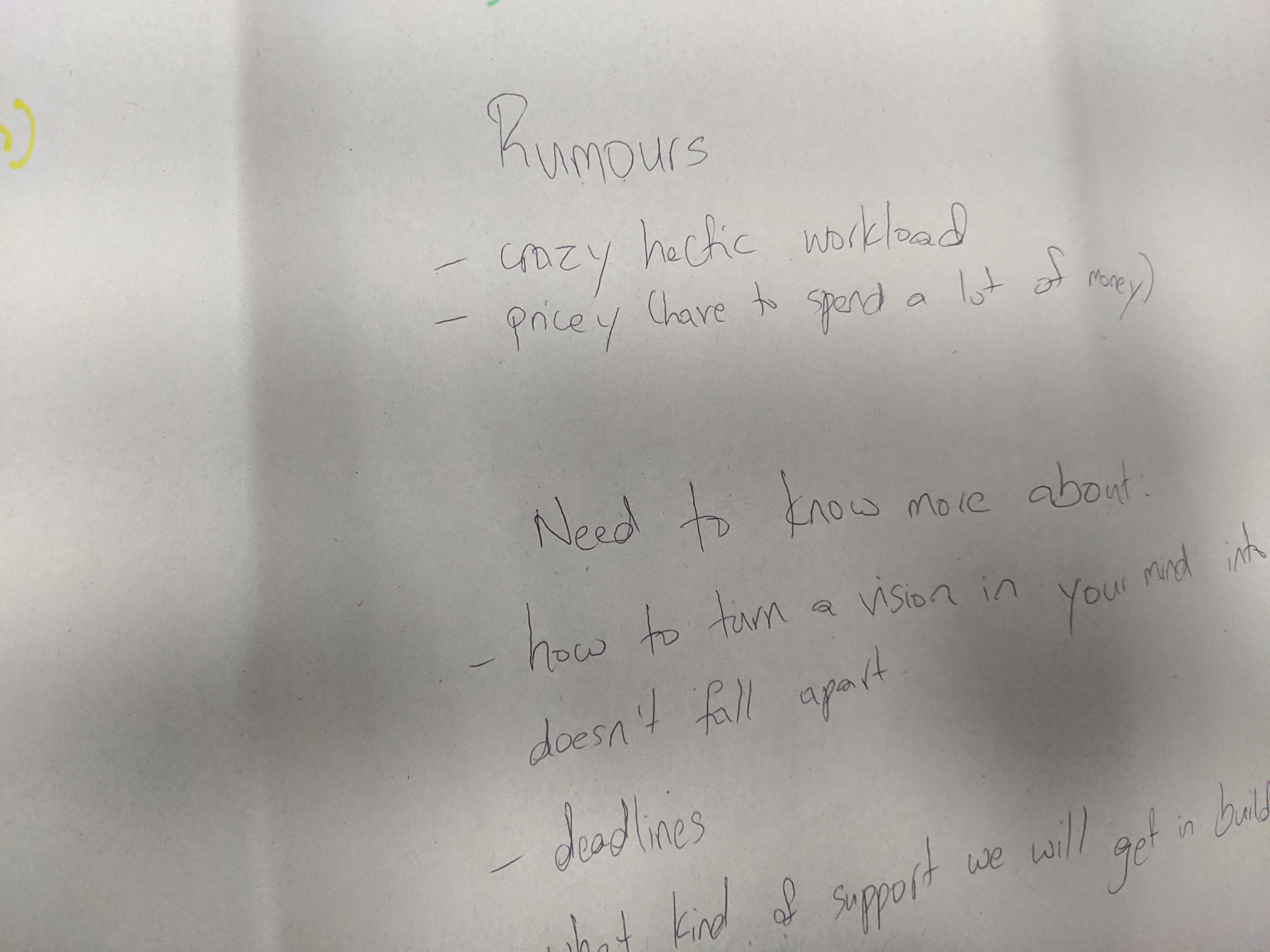 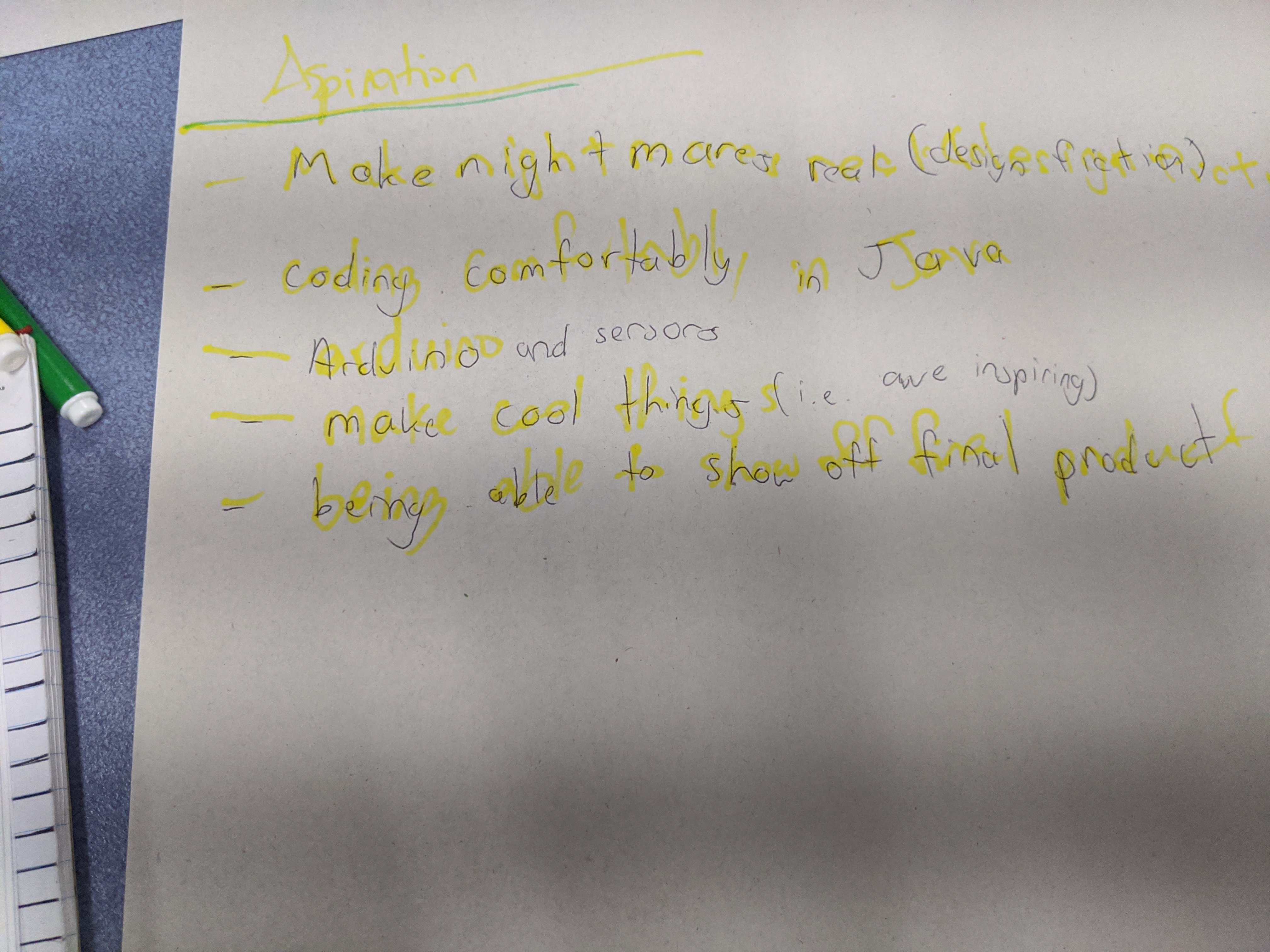 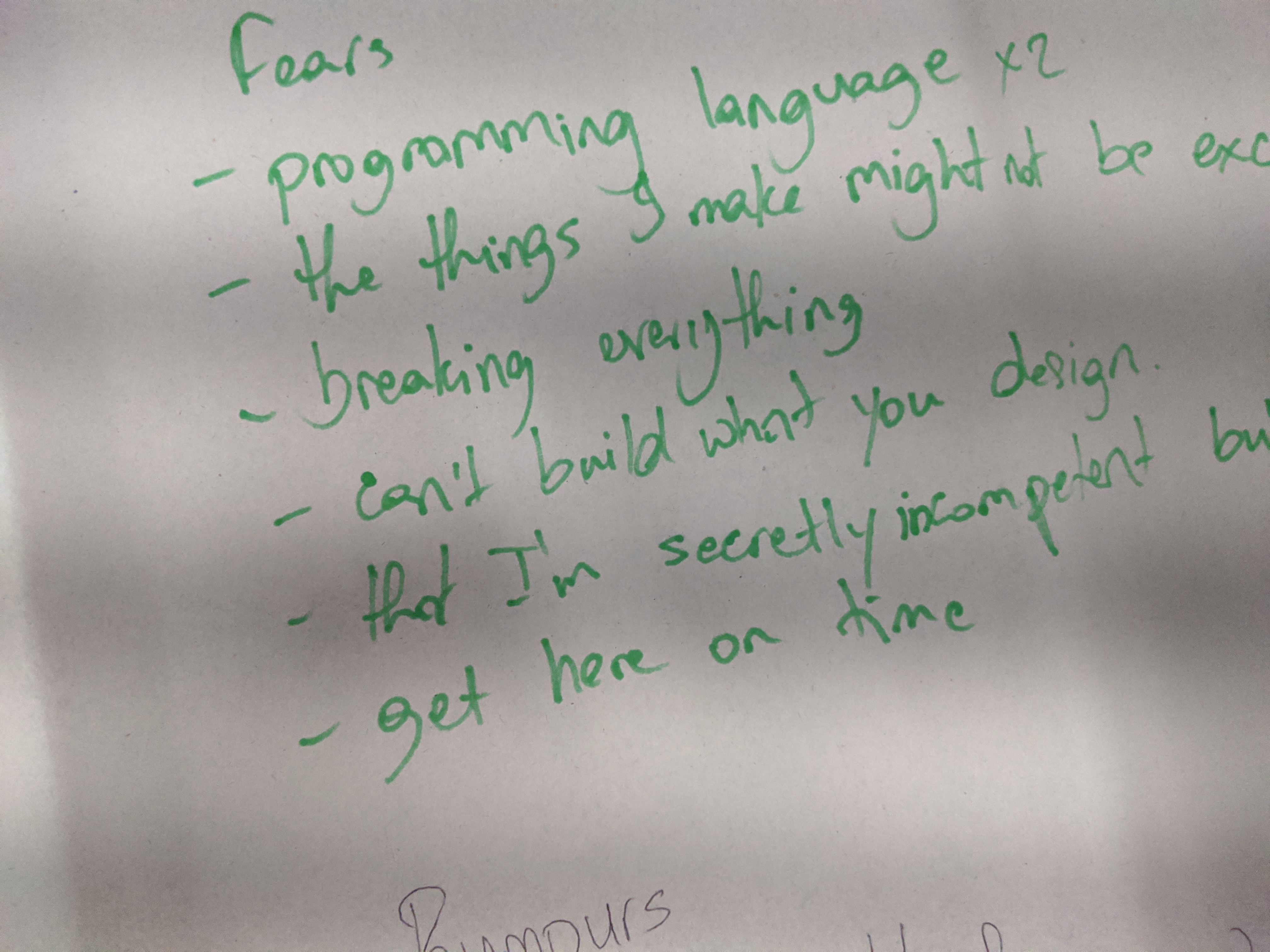 There were two big activities today, a group discussion on HCI grand challenges, and idea generation for potential project inspiration.

I would say the group discussion was acceptable - it was focused around Human Technology Symbiosis. Our discussion went through mostly how tech trends like how much tech decides things for you, and who the tech works for... i.e., for technology to be symbiotic with you, it should be serving you and not mostly its creators, creating an imbalance of power. Some highlights were: 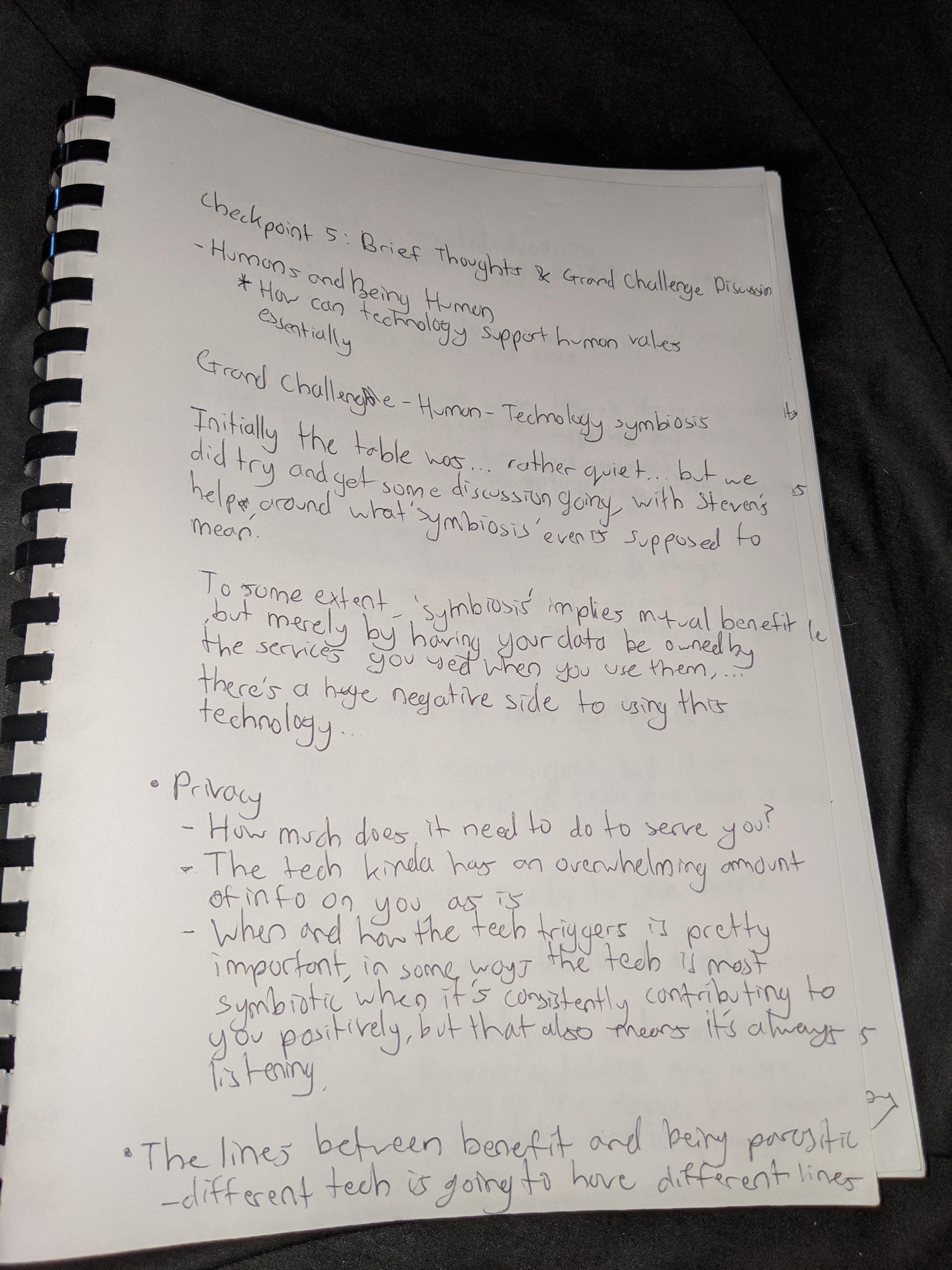 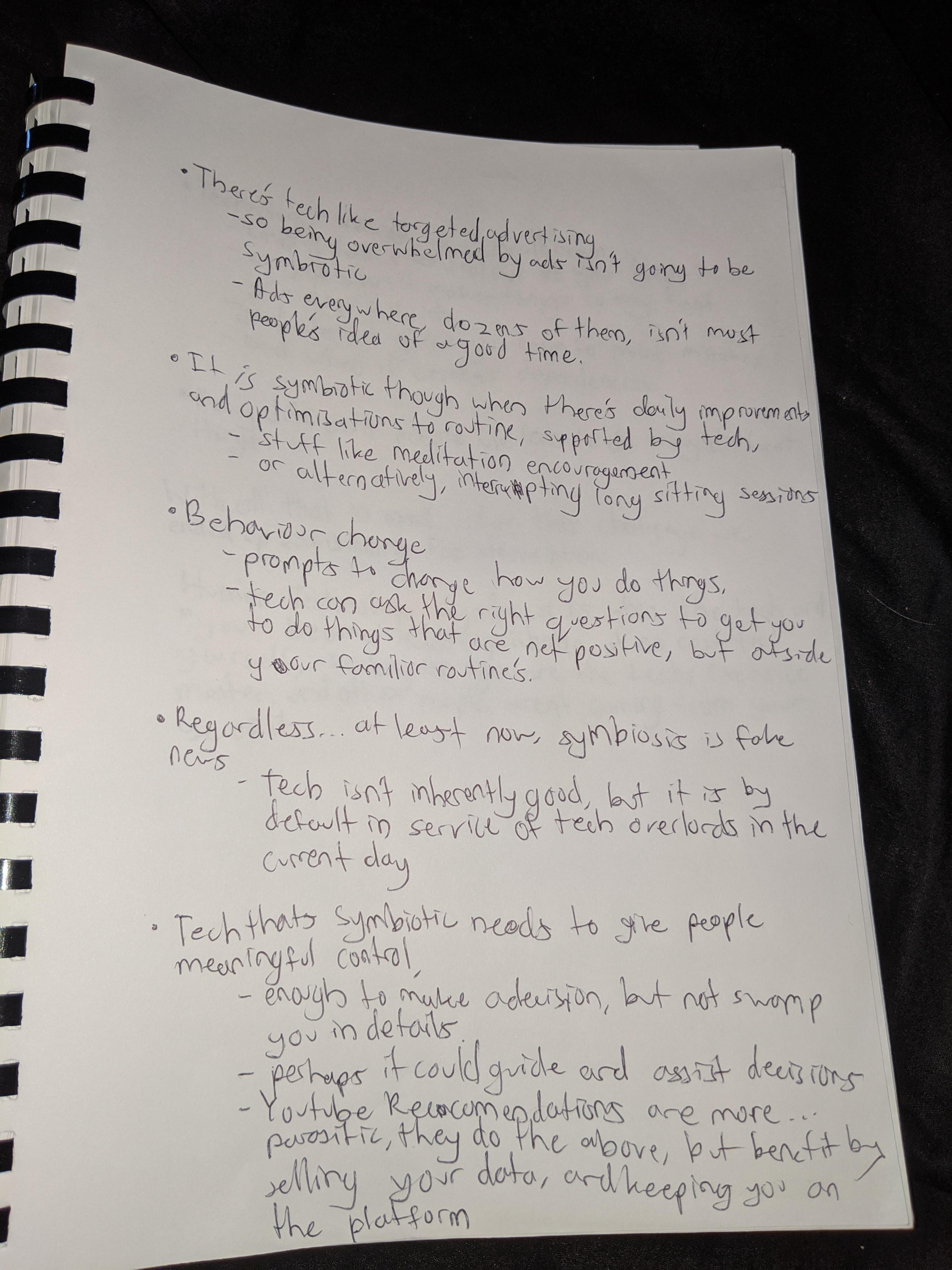 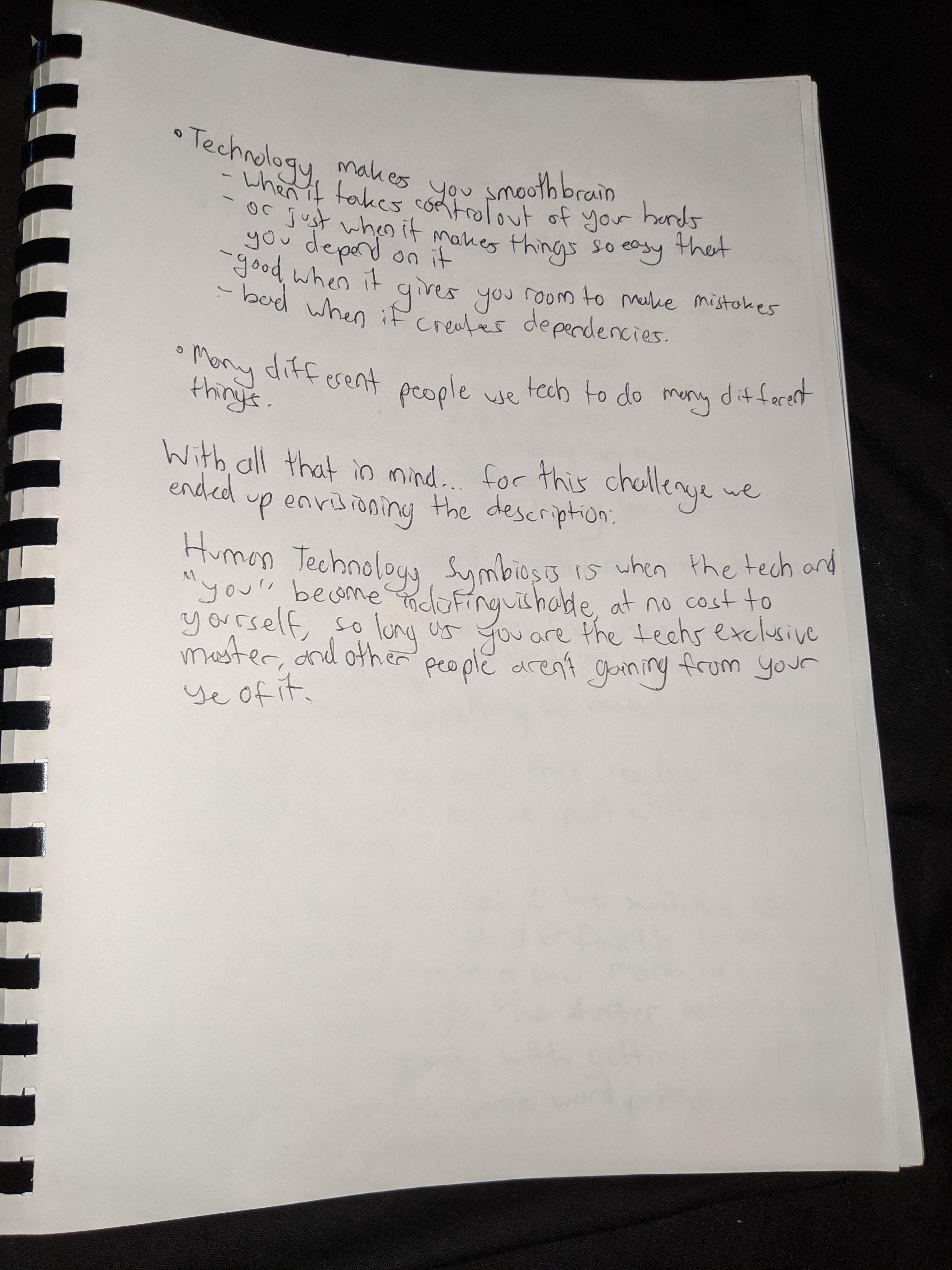 I'm a little concerned at my ... activity during the discussion, this first couple of studios everyone's been... a little shy. Im unsure if its because the semester is new, or because my presence in the discussion is overwhelming enough that people dont feel they have room to speak. I did take some action on this... by just not saying anything for some portions of the discussions - that just resulted in everyone going quiet however. 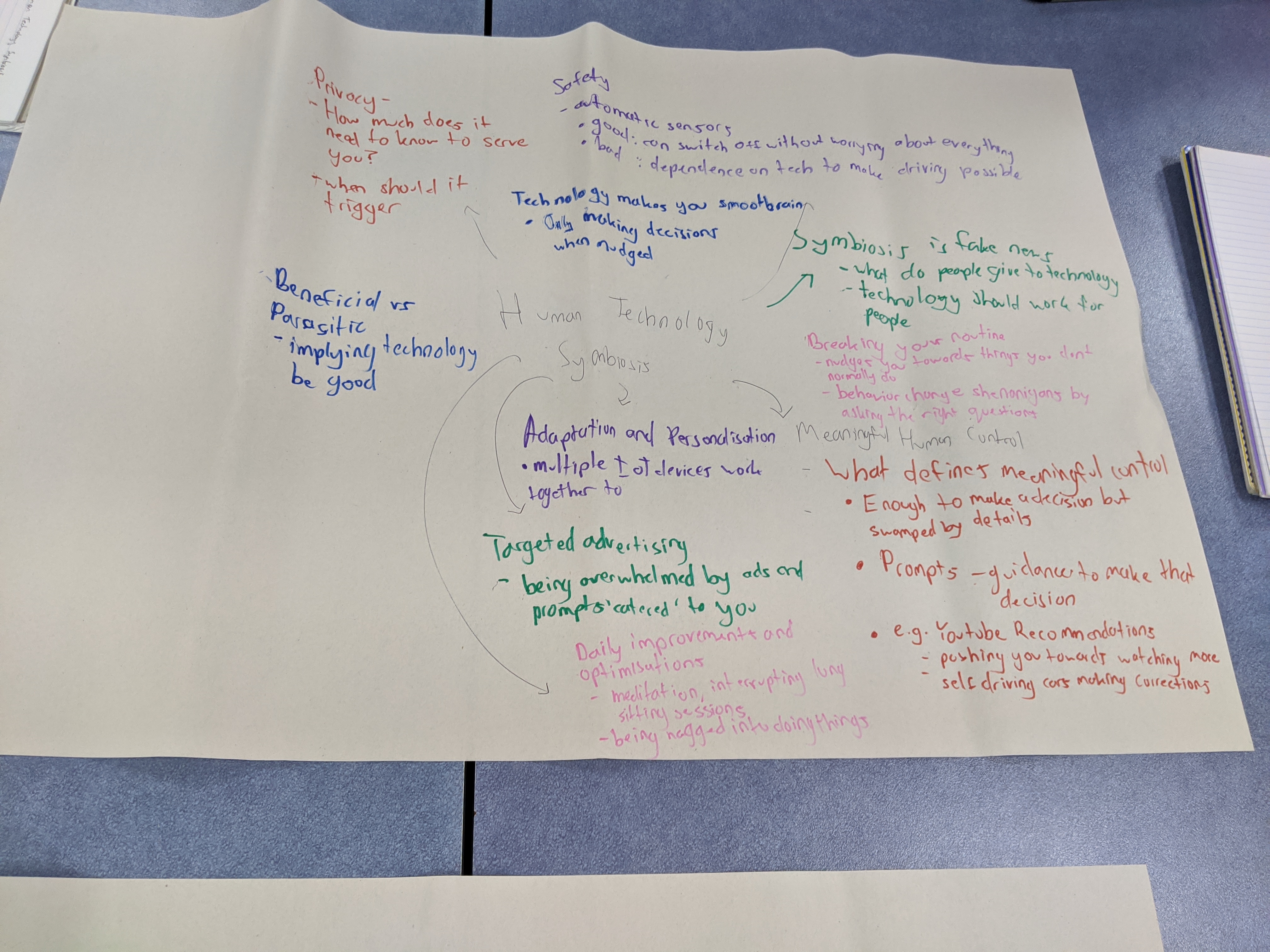 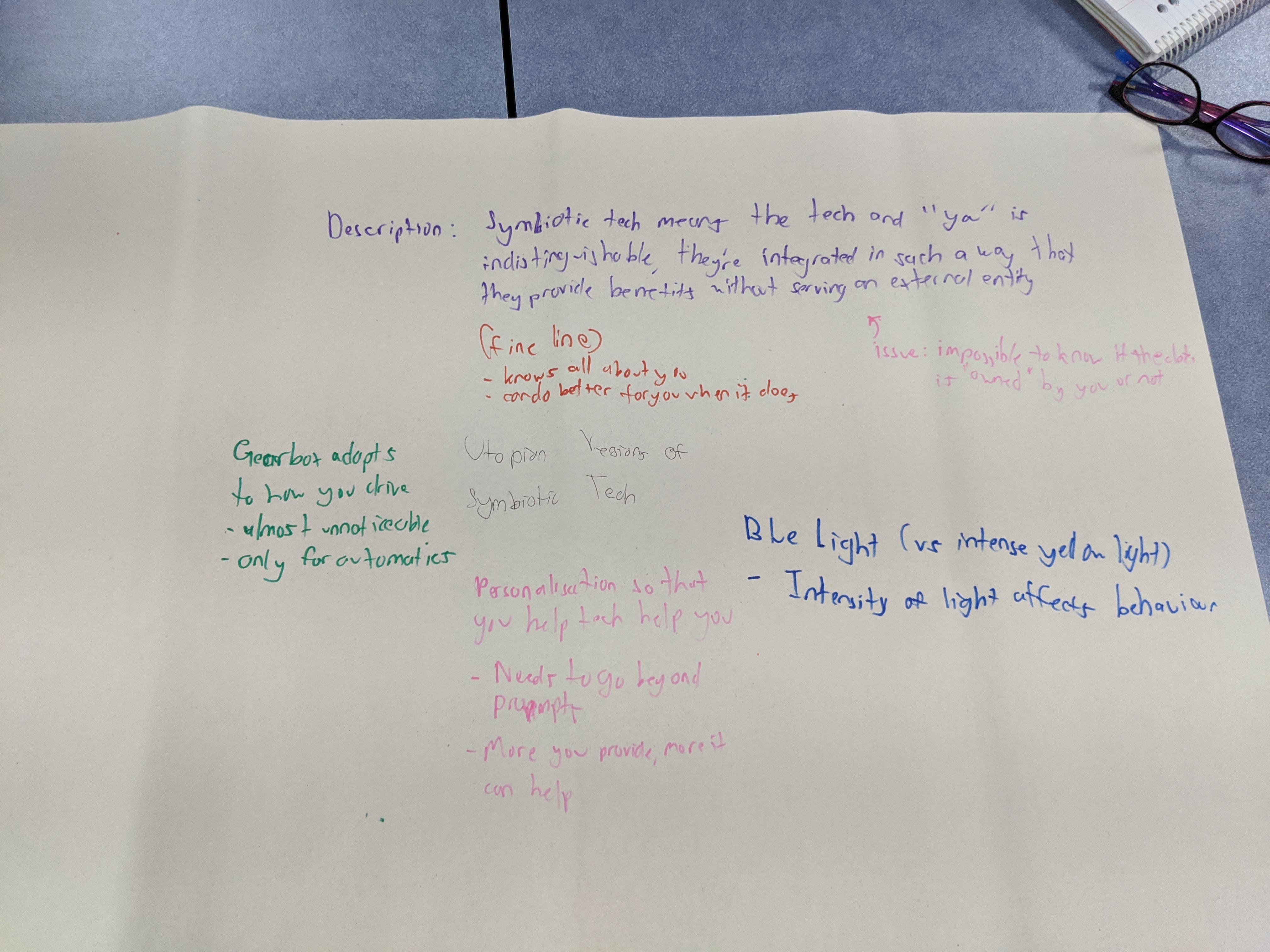 The next activity was idea generation, we received some prompts to work with, starting with prompt cards for the entire group worked on. A combination of the cards were used to pick an idea.

It was interesting to see how there was some constraints, so that we wouldn't try to come up with anything too out there, but options also felt limited because the spaces on the cards felt quite... general. It also had another downside... although unlikely, it was perfectly possible for every item on a card to be something one wasn't interested in, which could feel like wearing kid gloves while working on the concepts. 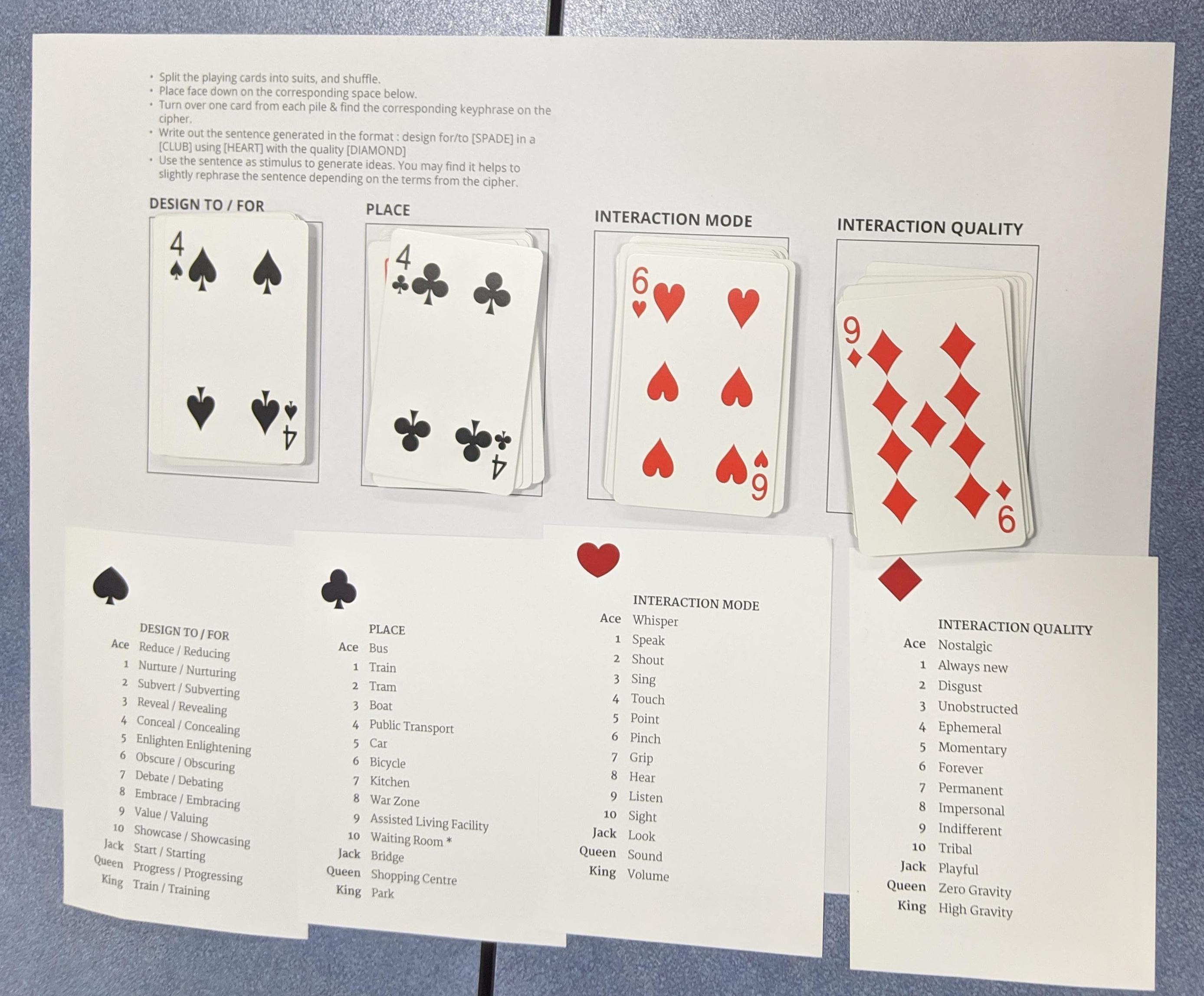 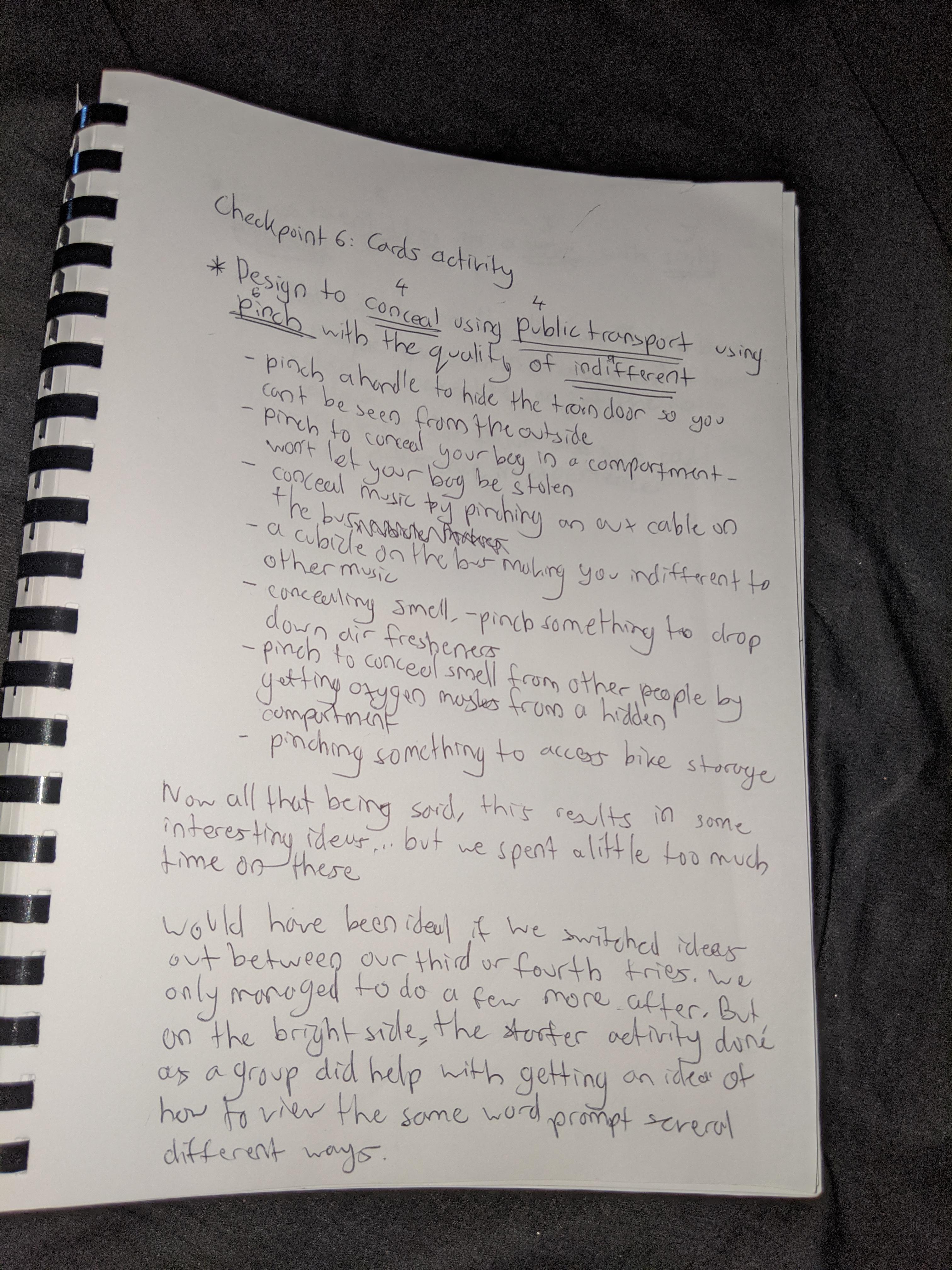 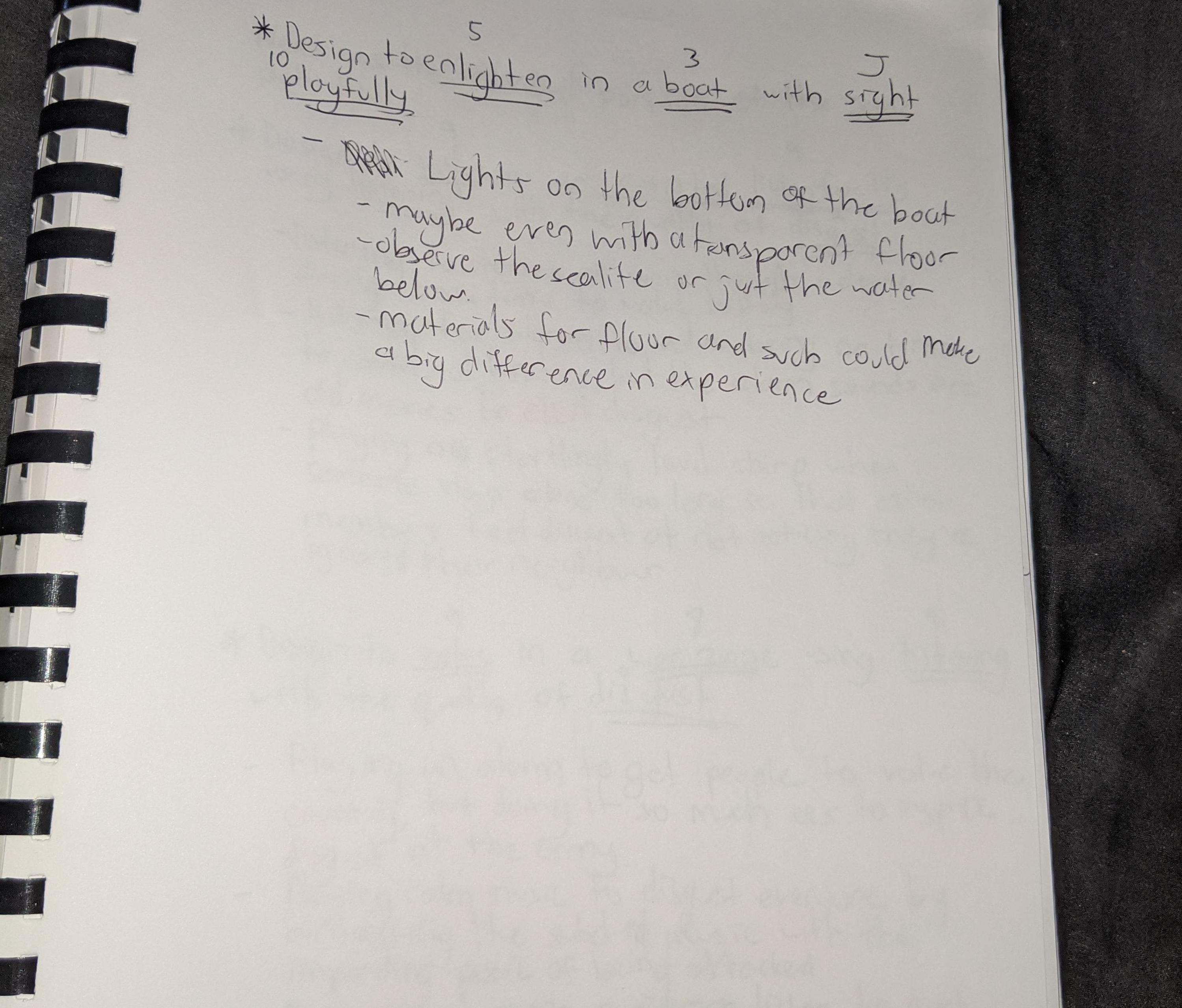 Next, We worked on some concepts alone. I preferred this opportunity to just... engage in the prompts as compared to the discussion, it was a chance to just have an idea without justifying why it was good or moral - it felt like with the group activity, too much time was spent on "fluffing" ideas to have a positive, happy outlook. But people are complex and feel many things. Sometimes a message is stronger when you deliver an ideological 'shock' to the user. 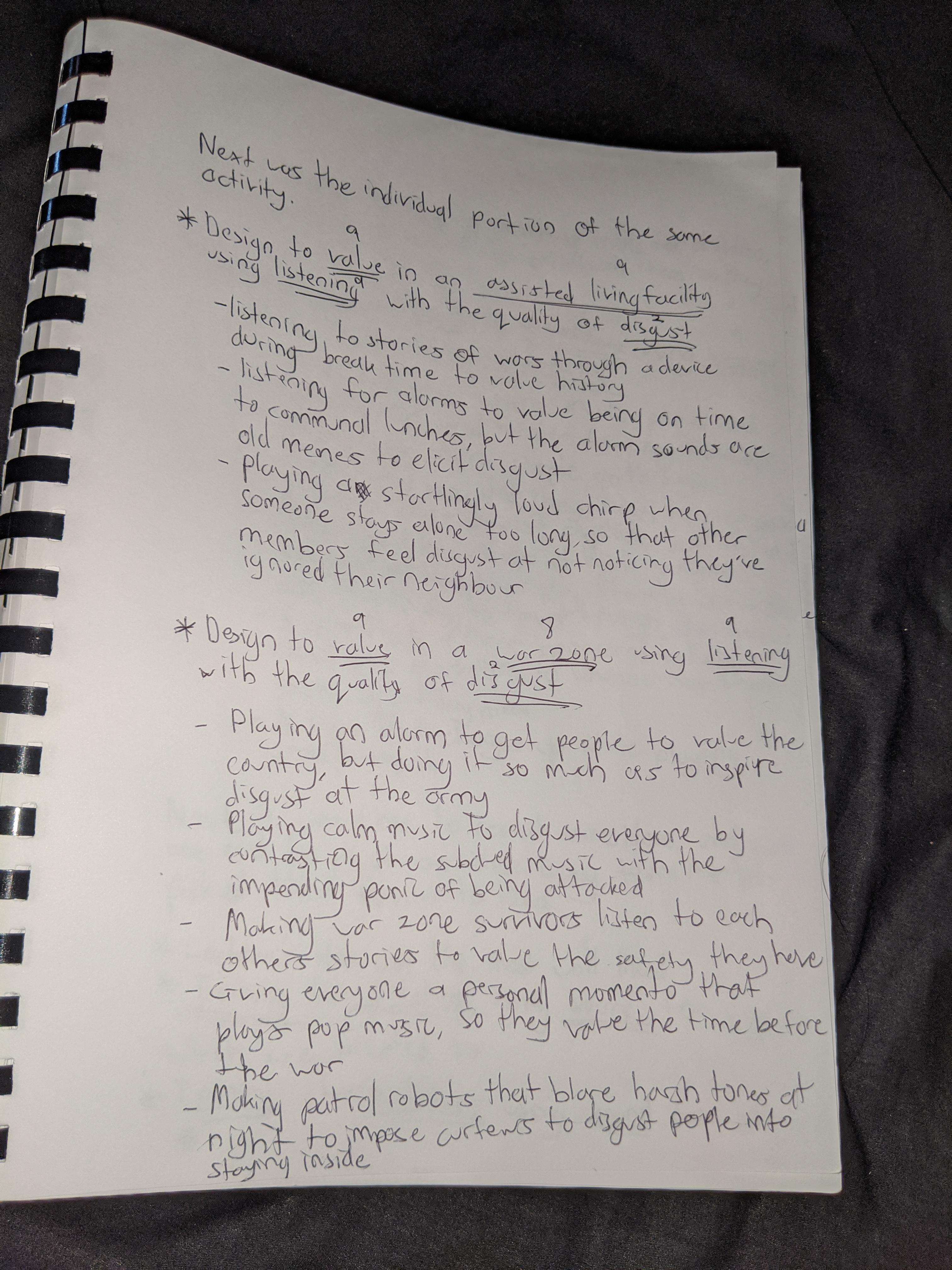 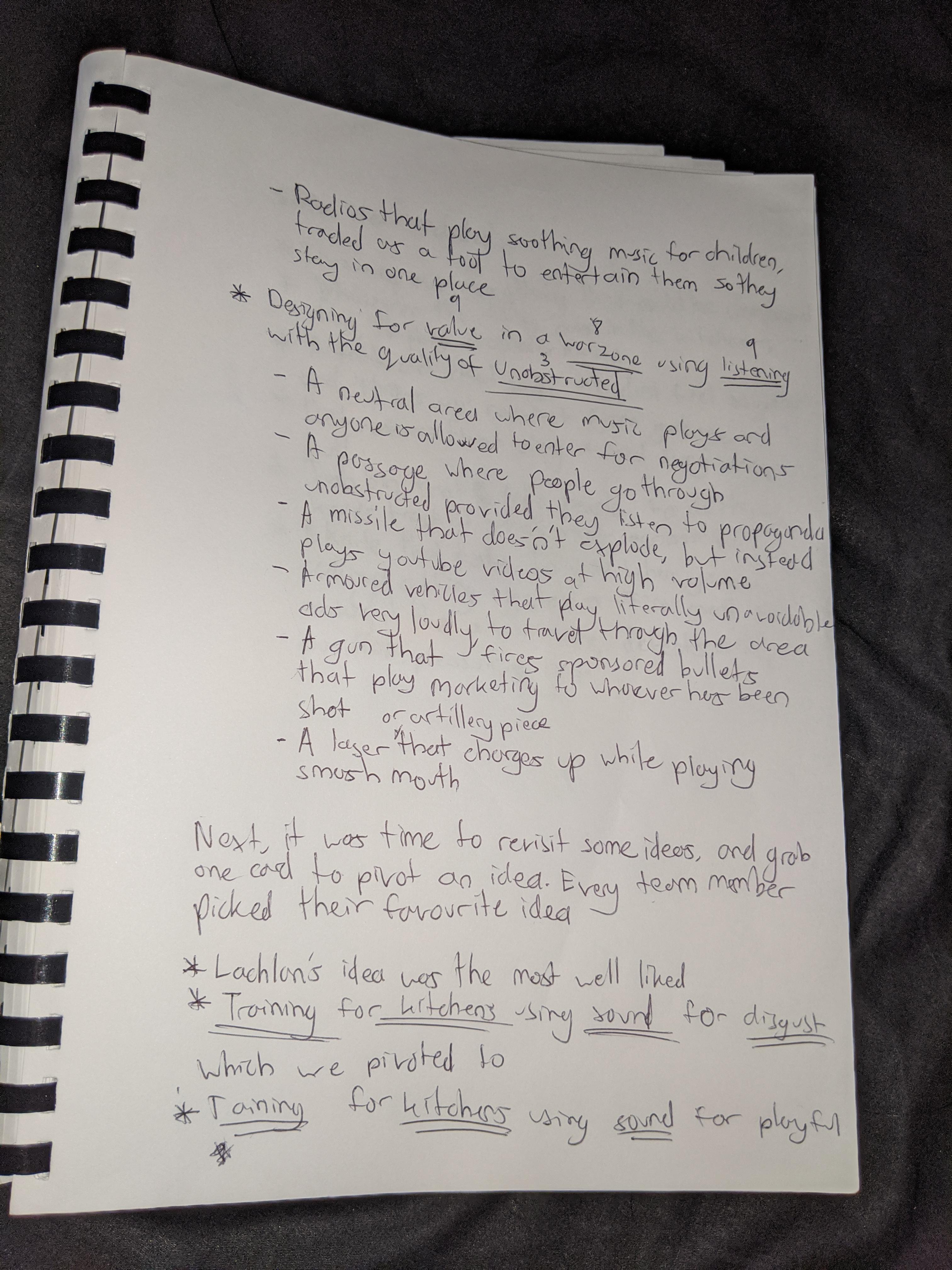 Finally, refining concepts... which was so-so. I blame this on being the last major group activity of the day... but it took longer to come up with tweaks and adjustments for these concepts than just making up new ones.

Perhaps this was partially because of the 4 levels of limitations, it felt like the selections of words in the cards for the fourth trait, "unbostructed", "nostalgic", "ephemeral" etc was the biggest obstruction, those words are so niche, that finding a way to get everyone to be on the same page on what they mean was a task in itself... what it means to be "ephemeral" for example is pretty unique to individuals experience. 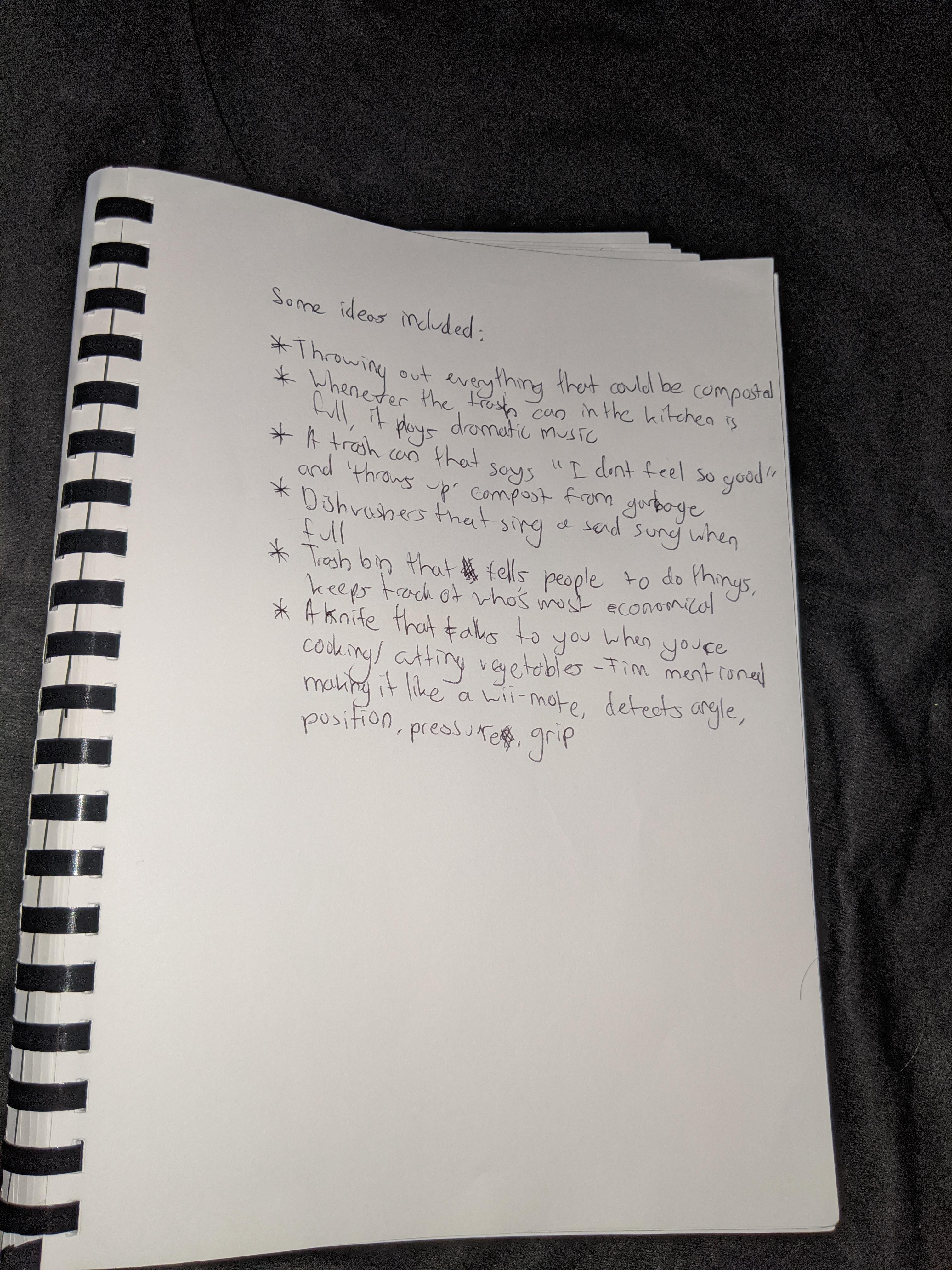 First off, the concepts, I'm not necessarily planning to use the ones that came from discussion during idea generation in class... Because most of those ideas were so far out of my interest area, that it feels disingenous to work on them. It was certainly useful to think of the ideas within the confines of specific limitations of course.

I've had brief sketches done for a few of them to give me something to start with, but going through a selection or expanding on ideas for it is what I've been working on over the weekend - separate posts coming soon. 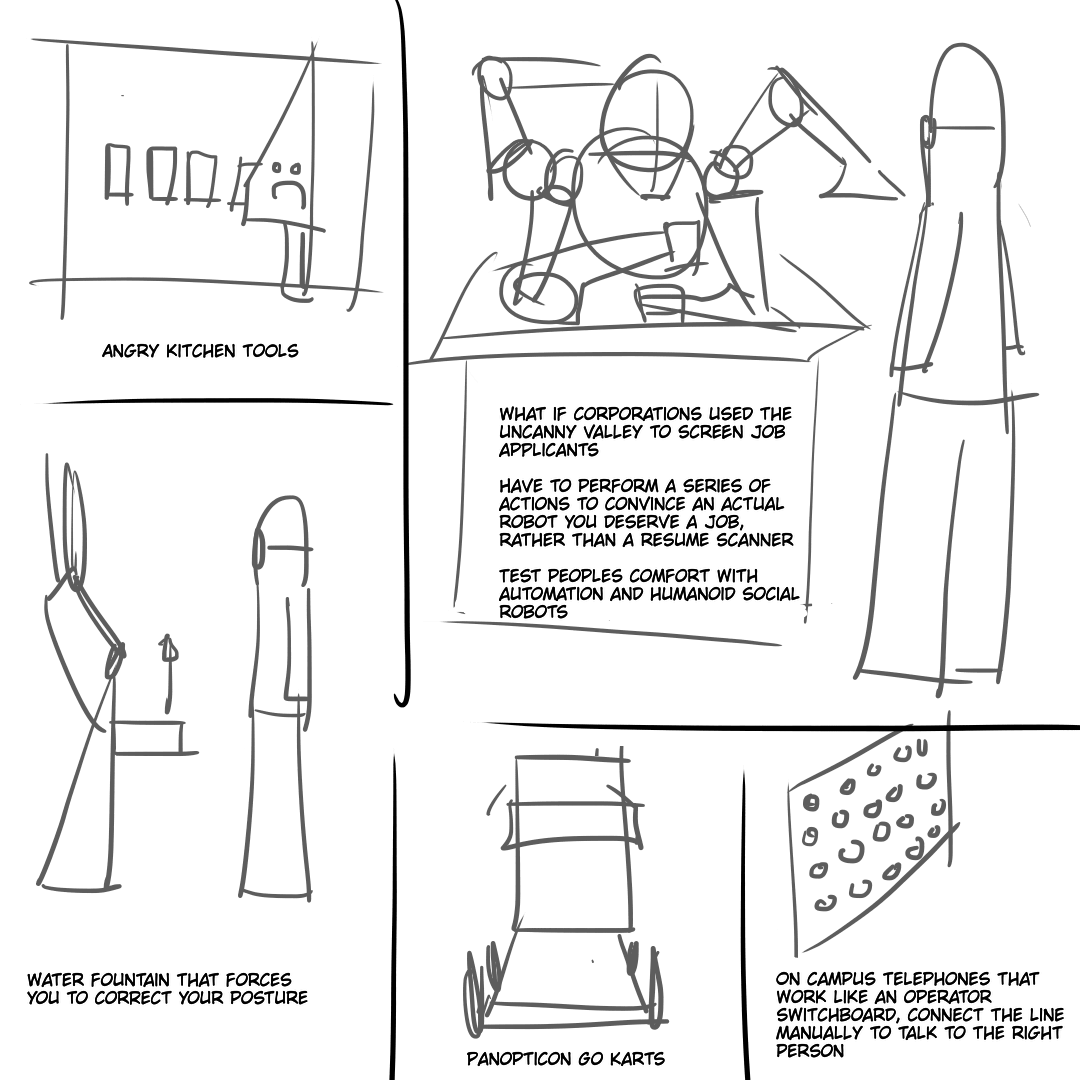 One piece of technology I looked into the most was this set of arms worn as a backpack, which would be controlled by a partner over the web.

In some ways, it's a social robot - my main area of interest. But at the same time, it facilitates collaboration, because you could have someone literally point things out to you, and communication, now you no longer just see the things your friend is saying, but also how they're acting, supplemented by the robot head also attached to the arms.

After writing all this up, I was a little concerned with the length and lack of detail ... but considering the need to keep the posts up, I thought I should post what I already had, rather than continously waiting for the right moment and the "perfect week review" to become possible.

Technically, week 1 is still ongoing, but placing a line down and working on activities that follow up what's already been done makes sure I'm not just running in circles doing the first few activities without making progress.

Posting as you have stuff, rather than waiting for a specific time or "right moment" is a good strategy to have with the journals. You've captured a lot of work here, with some interesting reflections - keep it up.