In this week's studio session, we have conducted the team appraisal session. In this session, we are required to work as a team to critique the work done by the group members from 3 groups. In the task assignment phase, we were arranged to comment on the work of team X, team Hedgehog and team E.M.S. I have gained a lot at this stage. Due to the impact of the epidemic, user testing is difficult for the entire project. Although we have thought of many methods such as using questionnaires and zoom meetings to obtain user data for project iteration, the obtained data is still not enough. I can be explained the whole concept in the form of video demonstration and document supplements to allow classmates to understand the whole picture of the project and obtain more user data so as to gain more inspirations for project refinement and reach the user-centered design. At the same time, I can also reflect on my own projects by watching the work of other students, so as to get inspiration for improving different feedback.

The team completes the entire project in the form of teamwork, and they share the same domain as ours, which is music metric. They chose to combine music and sports to make sports less boring. One of the highlights in their design is not only to provide users with sound feedback but also a series of visual feedback (such as the use of light bars to present different visual effects according to different pressures), which is something we can learn from. In the project, less consideration was given to visual design, and I put more emphasis on the realization of functions, so although the whole project realized some of the functions that I wanted to achieve, the work was not so beautiful. In addition, the combination of sound and cool visual effects allows users to have a better immersive experience, thereby interacting with music better to achieve a user-centric design. By watching the idea of the group's projects, I decided to work hard on the visual effects in future improvements and think about how to present daily sounds more interestingly.

This team also works collaboratively to complete a whole project and I really like their design idea of helping visually impaired people improve their hearing through games. Because the domain of the project is not the same as ours, we have little inspiration for our project in terms of inspiration and technology, but the team members among them gave me some inspiration for the construction of the 3d music scene. Our project is also highly related to music, and I am currently looking for suitable methods to make the entire product more playable and interactive. In the part related to music playback, I can consider using Unity to create a visual-pleasing music playback environment, so that users can get a more immersive experience.

This team works for the domain of enhancing mundane space. Their aim is to turn the boring housework activities into a project that the whole family is happy to participate together in the form of hitting games. This not only increases the playfulness of housework activities but also ensures the collaborative experience between the family members. This project makes me think of the collaborative experience in our project. At the first prototype proposal, we received some feedback of whether the product can be operated by multiple people. Since we haven't thought of a suitable method to make users interact with our sound lab with multiple people, this part of the idea is a bit stagnant. Their idea was to enable more people to participate in the form of a batting game, which also gave me some inspiration. In addition to the sound collection stage, which allows multiple people to use a dropper to collect sounds, whether it is also possible to design some corresponding interactive games during the sound mixing stage to make this product more interactive. This is the focus of work I am looking forward to working with in the following week.

I was responsible for designing the test tube part in our group, and I received the comments of three groups in the team appraisal part related to my part. After reflecting on their comments, I summarized the following points to provide ideas for the iteration of the future project.

The critique from team X noted that:"the effect of LED lights is not very obvious. From the screen, we can't tell whether the LED light in the test tube is lit." Since I chose plastic test tube toys to make the test tube part, the material is transparent, so there is a disadvantage that it can not hide the sensor used in the test tube for the interaction effect, also, because the plastic is thicker, the brightness of the LED lights is not that obvious and user can not judge the status of the device by watching the brightness of the LED. In this part, I will choose to replace the test tube production materials. In the first aspect, I will consider choosing a larger test tube to install the required sensor. In the second aspect, I will find a way to make the visual effect more obvious (such as changing the color of the test tube in order to make the LED light more obvious). In order to match the parts of my other team members, we will make a discussion on the selection of materials and the overall design through the form of group meetings to make the overall product look more consistent.

As one critique reads that: "We are worried that when the user shakes the test tube or puts the sound in the test tube into another container, this process will affect the stability of the connection in the test tube." In the design process, because the jumper cable will indeed have poor contact, sometimes it will also cause disconnection by the different actions of the user. Therefore, it will take a long time to investigate the cause of the connection, which will not only spend a lot of time, in the final exhibition, this problem will cause a poor user experience. Originally, we welded some sensors, but it was still not stable enough. After using, moving and other operations, it will still cause disconnection. We discussed and decided to use electrical tape to fix the sensor and cable wire. Although this method is a bit time-consuming, it does play a fixed role and also makes a simple integration of the messy cable wire to a certain extent. I have also received relevant suggestions regarding the presentation of music playback. For example, one group from the critique showed that "rather than lighting an LED, I think you need to display the presence of sound in a more obvious way." Combined with the reflection gained from critiquing other groups‘ work, I think I can add some visual effects when the users playback the music. I also need to do some research on how to combine sound and visual effects together, which can help me better serve the project. At present, I intend to use Unity to design a scene for the music playback as visual feedback for users playing this device.

This week we work collaboratively in school and integrate the parts we have completed separately together. At present, the team members have realized the main functions of their respective parts. The main task of our team this week is the integration of code and debugging of the entire project. On the arduino code, we have classified and commented according to different parts of each different section to facilitate debugging in the future At this stage, we have only completed some main functions. Ideally, the device consists of a dropper, three test tubes, two jars, and a beaker. But at present, we just installed a dropper, a test tube, a jar, and a beaker and almost used up the analog and digital interfaces on the Arduino Uno development board. The following picture is the overall presentation after integrating the work of all team members. 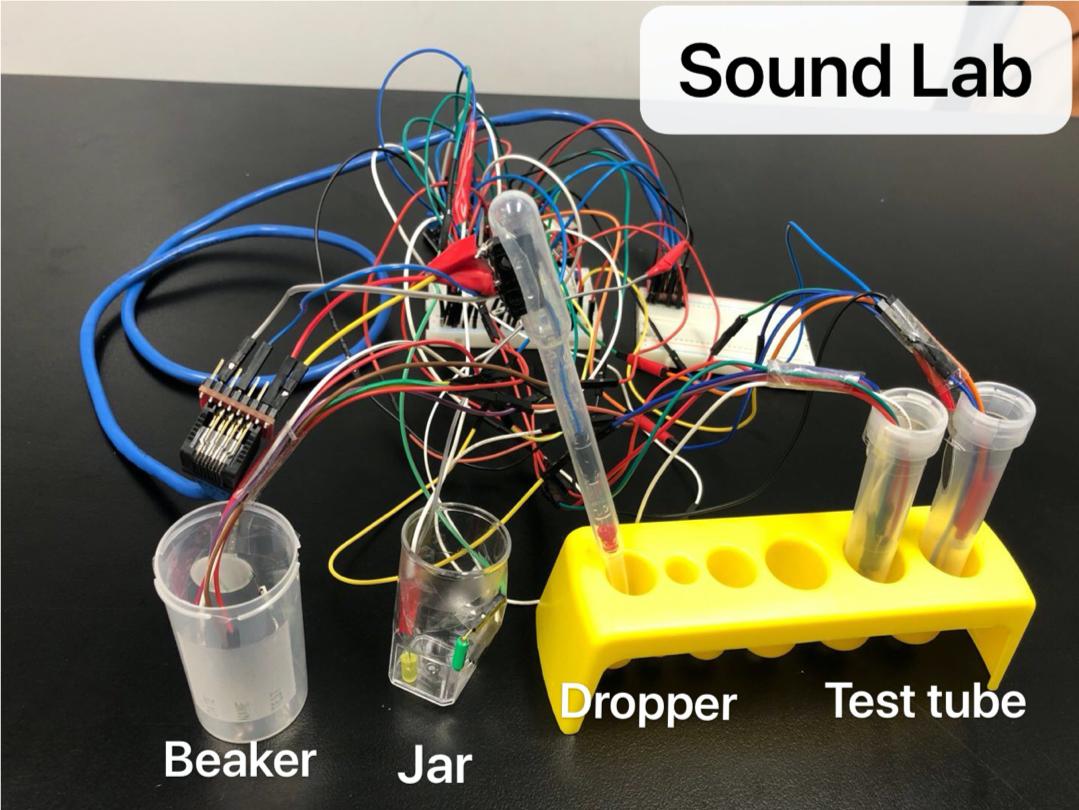