In this week, what I have done is the improvement of the concept based on the feedback of the report and the showcase.

There is an unreasonable design in the initial concept. User needs to attach the seating detect sensor on his/her legs; however, the following interactions such as moving around to find other users and the body stretch game does not need it, which only makes the overall process more complicated, and too much devices are attached on clothes, which might also negatively affect user experience. So, the first improvement is the seating detect sensor will be fixed on a chair rather than wear it on clothes. Moreover, reduce the number of patches to two so that to make it more flexible and easy to access. 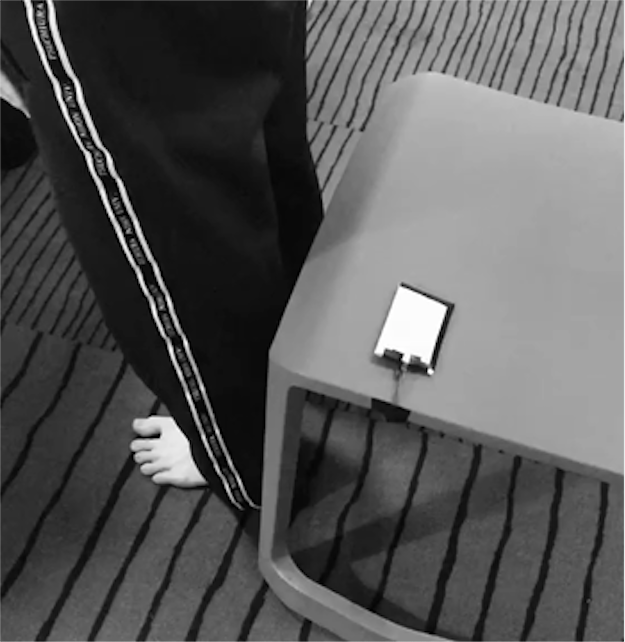 I learned that If a user found it difficult to wear the devices, then the willing to use the product might be reduced. Moreover, all other interactions are based on the patches, which means if the they are not portable and flexible enough, then the related interactions might not be fluent, and it might be easy to make mistakes. For me, as a designer, the priority of creating a product is human-centric, and the product should achieve target audience’s requirements and needs, which aims to ease user’s life. If a product makes user’s life more complicated rather than moving toward a convenient life, then the design of the product is failed.

In addition, it can be paused for any circumstances such as meeting. Users only need to simply remove the patches on their clothes, then it would be paused. I have considered other ways to pause it, such as press the patch two times, and then it would be stopped. However, as a wearable device, flexibility, portability, and light weight are the core requirements and needs. No one wants to wear a device that involves complicated interactions. Moreover, for the users who use it for the first time, they might not able to know how to stop it. So, I would make it as easy as possible based on people’s existing experience. Then, I just simply make it as remove it then it can be paused. However, it might be simulated in the prototype since based on the Arduino materials, it cannot be achieved.

On the other hand, the body stretch game was changed. In order to motivate users to participant in the game, I made it more challenged with a punishment system. Moreover, a new feature was added, the patch would flash frequently once the game started. So, the new idea for the game is: an interactive game called ‘pass bomb’ that aims to stretch body would be activated: one patch among them would be selected and activated with a certain flashing frequency. The frequency would increase with time, and the 'bomb' would 'explode' when it reaches a certain frequency. The punishment is the vibration strength would increase on that user for 5 minutes, which aims to make it more annoying. So, they need to pass the bomb to other users before it explodes. They can do it through simply touching the activated patch. They are able to stretch their bodies while passing the bomb. Such as touching arms and legs. Users can back to work after the game finished.

Since I have completed the improvement of the concept, the things need to be done for the next week is the adjustment of the prototype based on the updated concept. Specifically, there are three things.