I spent most of my time last week working on the next prototype and my annotated portfolio.

In the studio, we had our regular stand-up with this week's focus on having a one-line pitch for our concept, show what we have been working on, what our priorities are for finishing the project for the exhibition and questions regarding the portfolio. Although we have slight variations of pitching the concept and thoughts of the ideal product, given that we are still exploring different aspects, our current one-liner is "E-mories, a distraction-free physical platform to remotely share personal emotions with close friends and family". Moreover, for my progress, I showed the state of the ball, which at that point in time was the new ball with a bend sensor attached with silicone to the inside. As for priorities finishing the project, we had already fixed it so that all devices could communicate over the server, so we mostly just had to continue focusing on making sure our individual prototypes works and to conduct user testing for the last prototype. 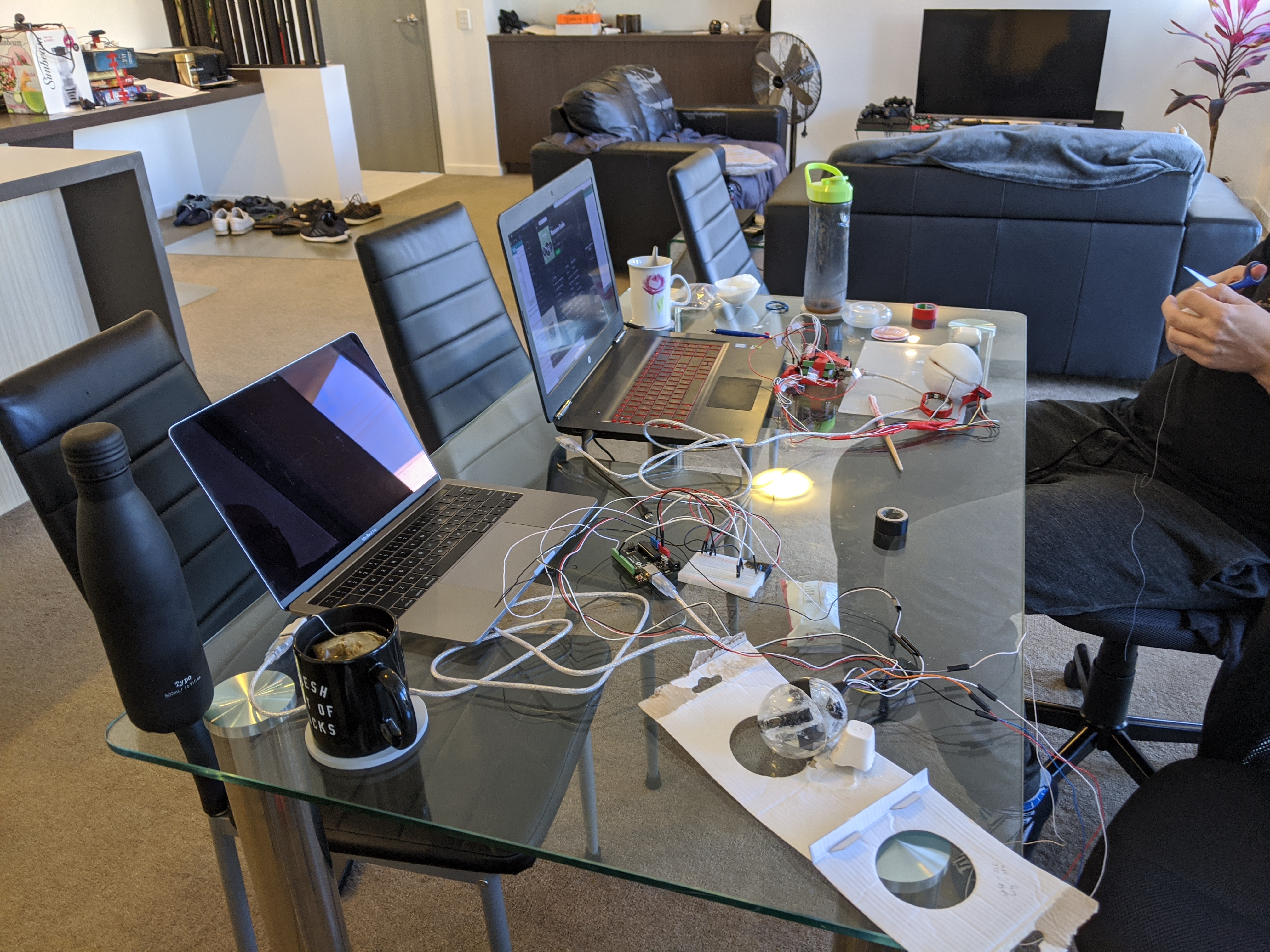 As for the prototype, I found a nice transparent ball at K-mart which I could use. The ball had a nice pattern to it which I believed could reflect the colours in a neat way and it also contained some glitter water inside. At first, I didn't think much of the glitter water as I mostly wanted to use the ball. However, looking back at our additional features suggested in the proposal, one of them was to add water to the E-mories device. Given that I am building this prototype to test material and how to make the device more of a personal artefact, I decided to test how adding glitter water could make for a unique look and feel and test whether it made the device feel more personal. 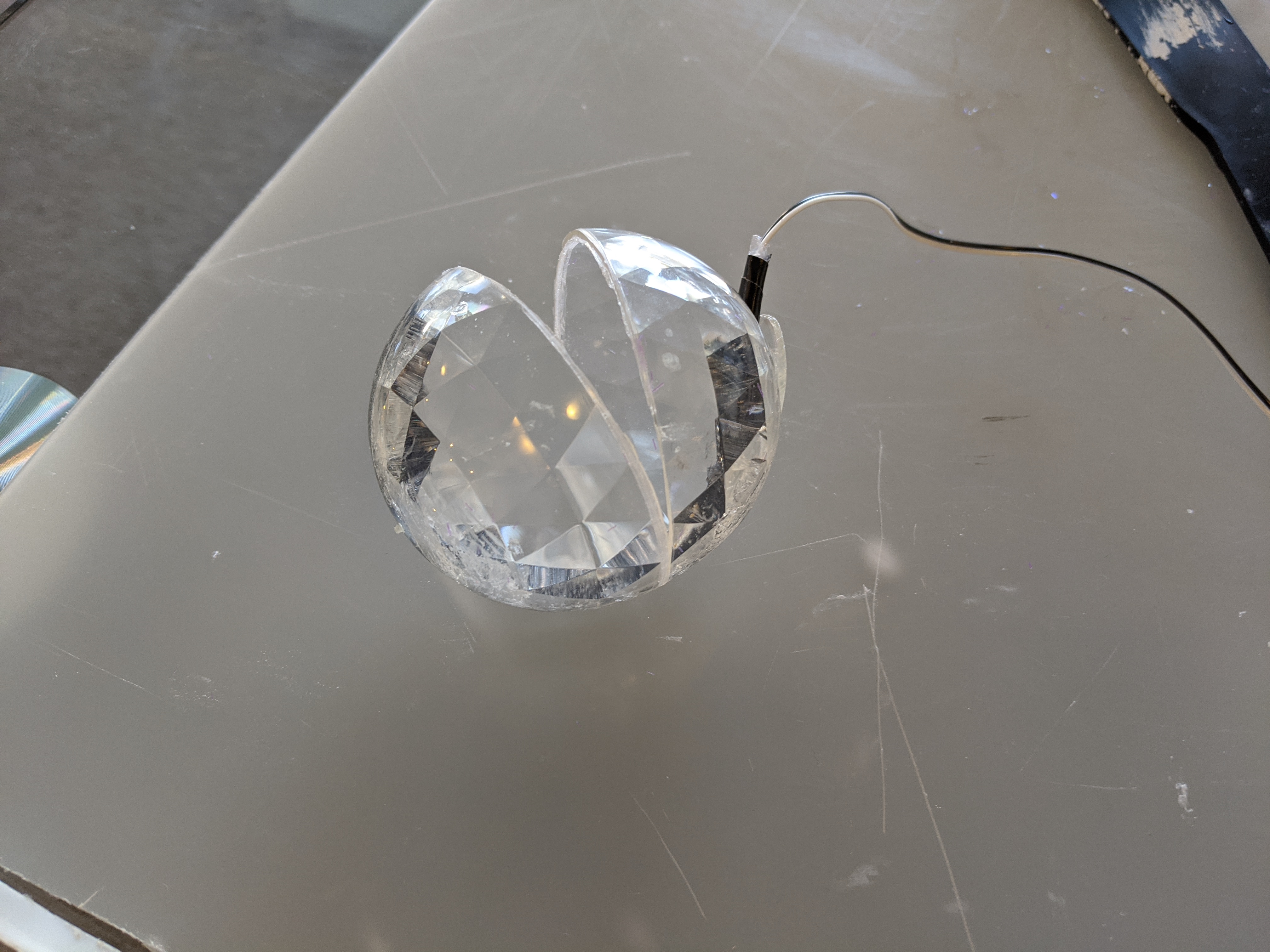 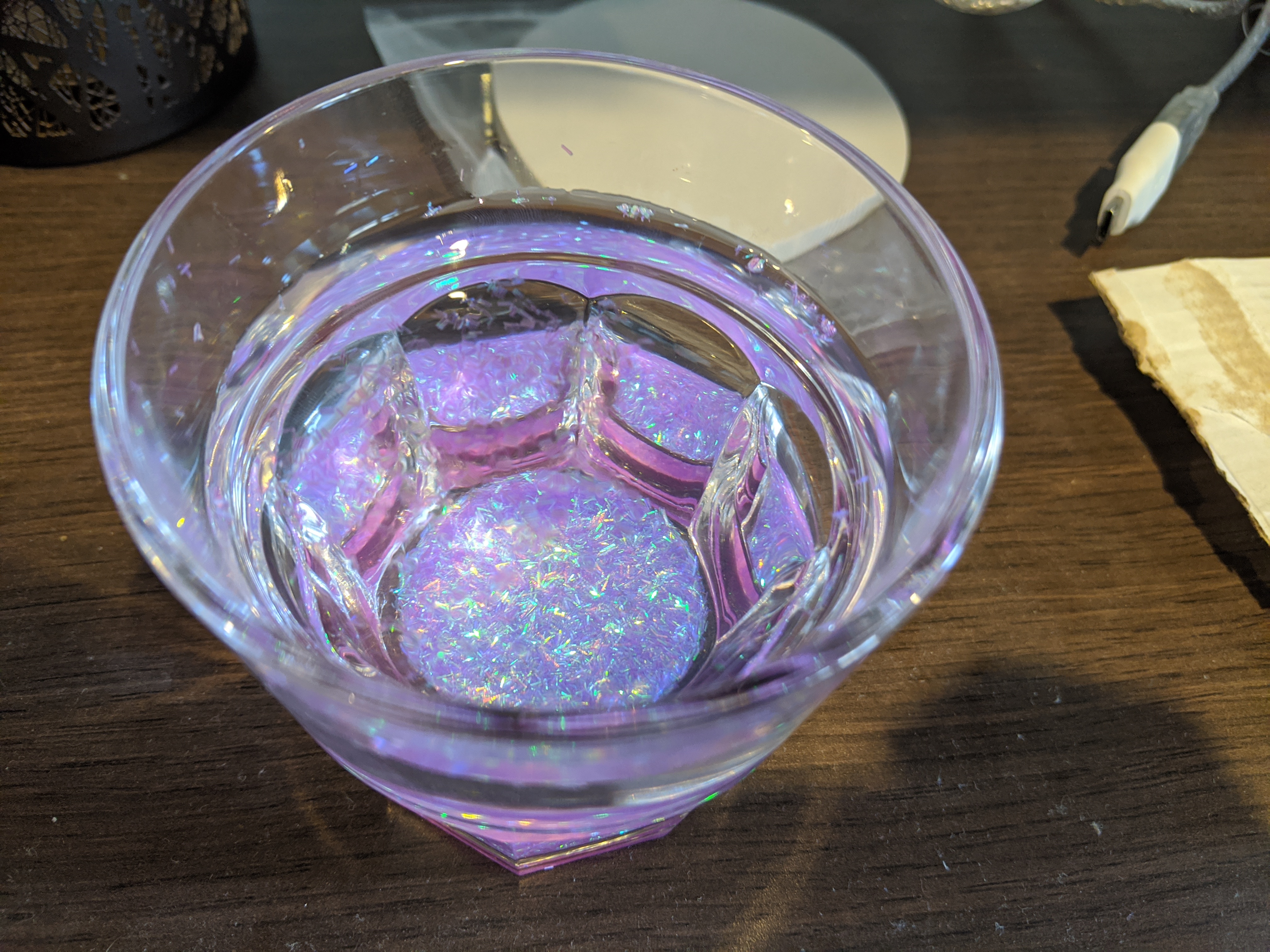 I drained the water from the ball and started to place the various Arduino components and sensors inside, making sure they were all fully covered in silicone to avoid any water touching the electronics. I covered all electronics I could in clear plastic wrap and black tape before I covered them in silicone, to better protect the electronics. I let the silicone dry before I carefully tried to put some water inside to see if it was still leaking. Three times I had to put more silicone in to stop the ball from leaking, which was strange as I by the end had covered the entire bottom half of the ball with silicone. 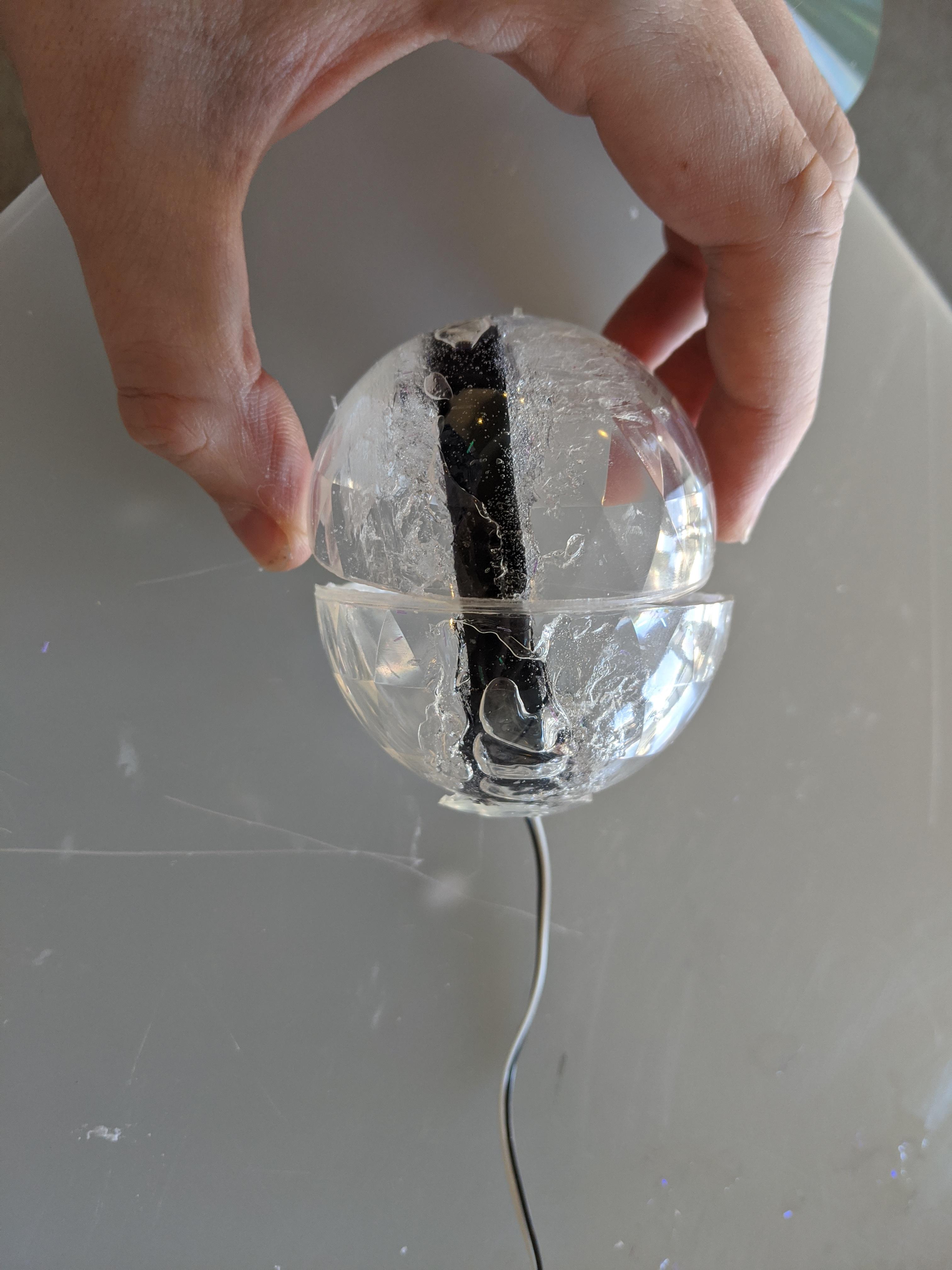 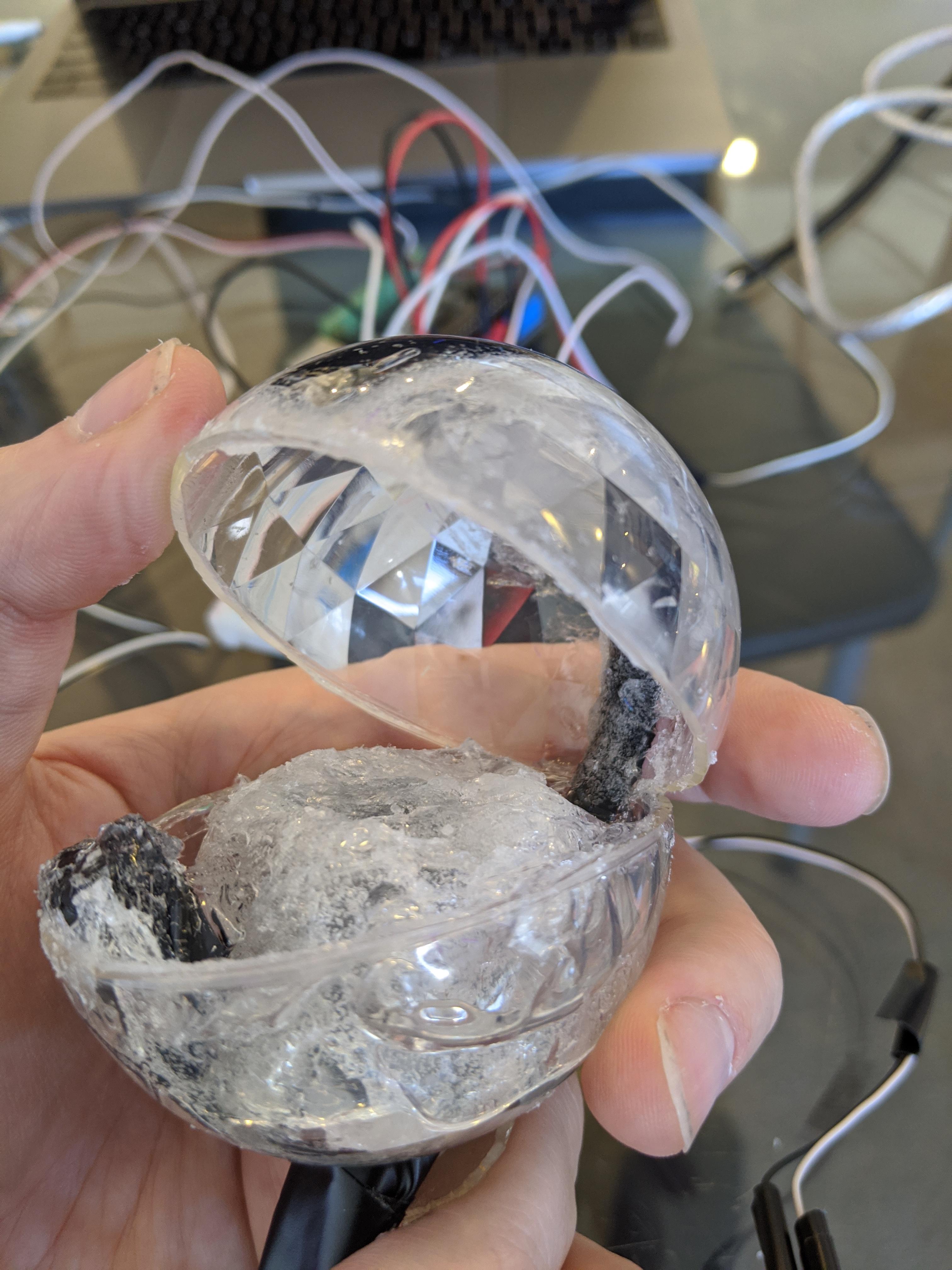 When I finally had made sure it did not leak, I tested to see if everything still worked, which it did, but the accelerometer has ever since testing it for the first time seemed quite unreliable as it seems to mix angles. As for the working parts, they can be seen in the images and video below. At this stage, everything from recording to picking a colour, sending data and getting an incoming message notification worked as intended. However, when I picked the prototype up the next day, the bend sensor values were all over the place, which made nothing work. I inspected the ball for water leakage, but there was none. I knew from when I received the bend sensor that the connection was somewhat loose which I had taped earlier to avoid these issues and later put silicone on top of to hold in place. Despite this, I seem to have some issues with the bend sensor. Having tried to fix the issue for a couple of hours, I decided to drain the ball of water in case that had any effects on it. So, I'm going to let it dry off before trying again. If not, I might have to stimulate the squeeze interaction as I would have to pull everything apart to access the bend sensor and fix it at this point, basically meaning I would have to purchase a new ball and start over from scratch. 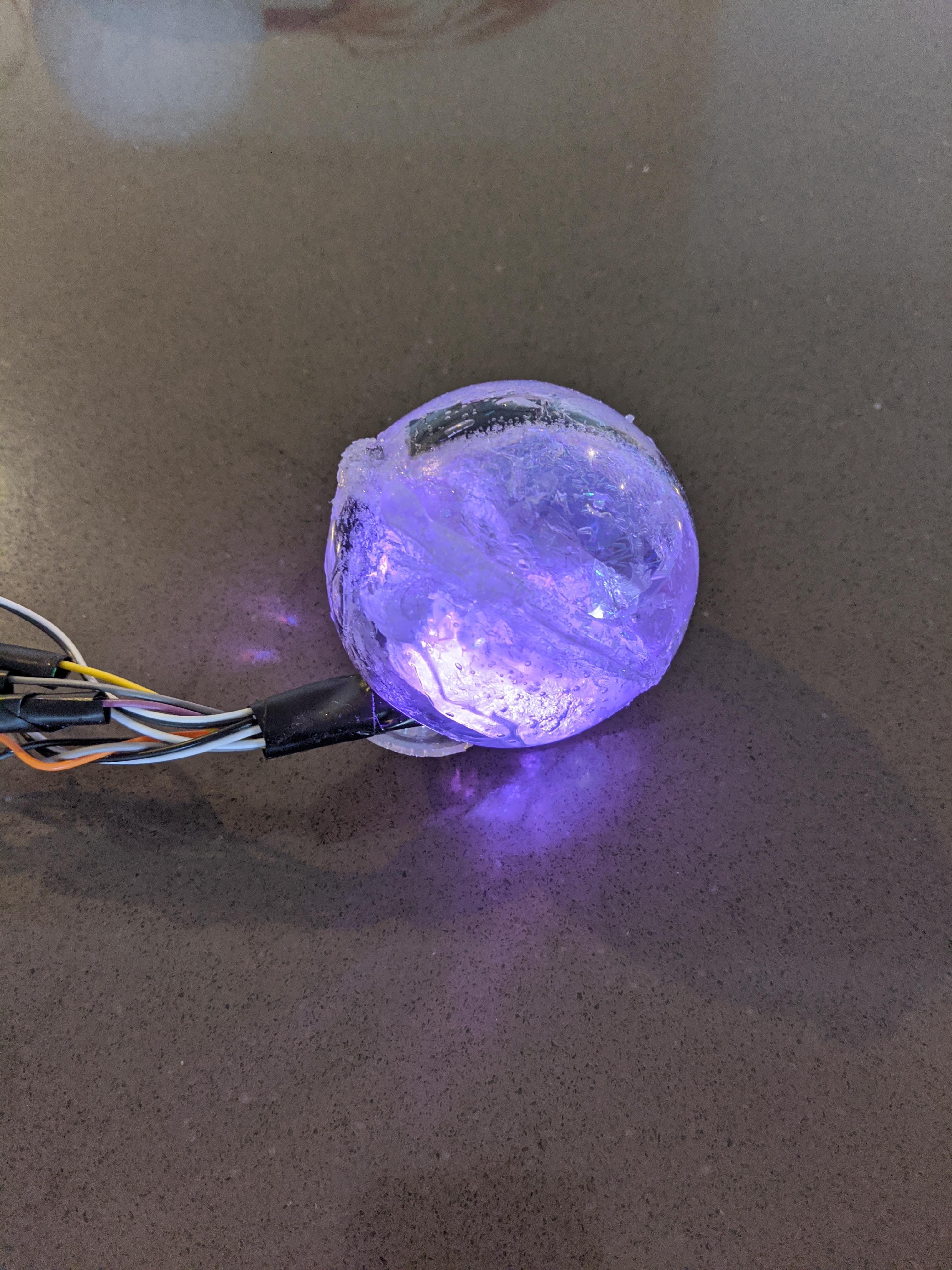 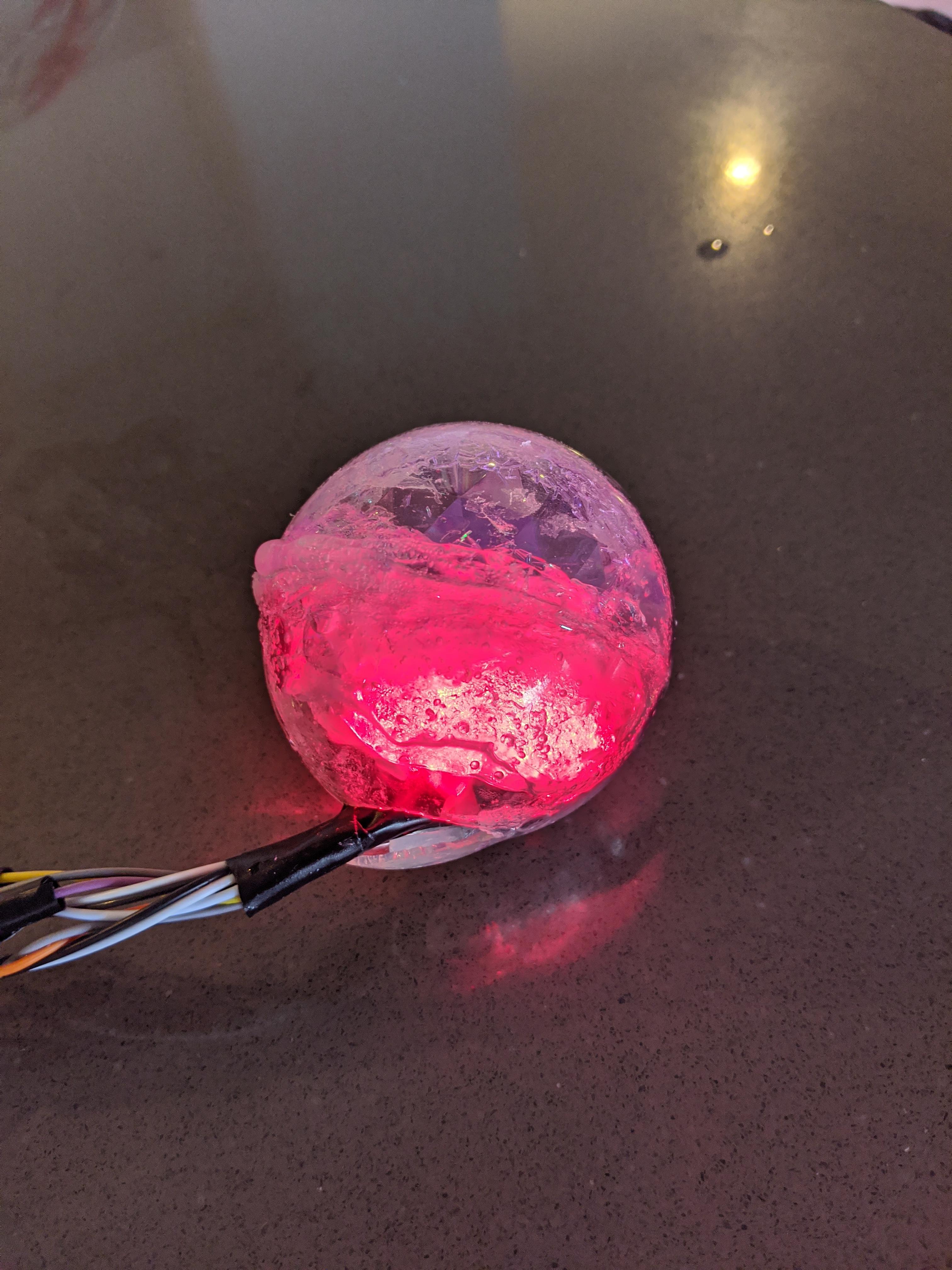 As for the rest of the week, not counting the time I've spent working on my thesis, getting ready for the prototype demonstration there, I spent working on the portfolio. My current progress can be found here: portfolio

Most of the time I've spent working on the portfolio has gone to rewrite and condense what we have already written about in the proposal, journal and first prototype delivery. Re-writing this content feels rather repetitive and as a result, made my motivation take a hard hit. I'm still struggling with motivation in both courses as there is a lot of repetitive work and every day feels the same, not being able to have a social life for the entire semester. Still, I believe I'm on track for the exhibit and portfolio in PhysComp, while I still need to catch up on the thesis as PhysComp requires most of my time throughout each week.