Over the weekend I had a little visitor come by. One of the participants of my field work visited me to test the final prototype along with her mom and sister. The participant is aged 4 (within the intended age range of users this concept is being designed for) and her sister is age 8. I already had the Interactive Colour Mixing Carpet out and ready to go for when they arrived. When participant and her family came in she expressed excitement and jumped on the carpet. I briefly explained the instructions for using the carpet:

I then played the role of teacher/ instructor guiding the activity. She would tell me which coin she wants to collect and I will move the character accordingly. Then she proceeds to colour in. Her actions and flow of using the carpet says that the interaction is pretty intuitive even for this young target audience. She noticed the coin counter going up each time she collected a coin. Surprisingly afterwards she initiated conversation with her older sister as she explained the colours she had mixed to get another and therefore able to collect coins. This is surprising as this is specifically one of the measures outlined in the prototype document to indicate the success of this project. To see whether the child opens up a conversation about colour theory, mixing colours, and being able to predict the colour outcome of mixing two colours.

There are other features of the game that she interacted with as well. The birds were flying in the background and she played with them by trying to catch them, jump behind them as moved, and ran from them. 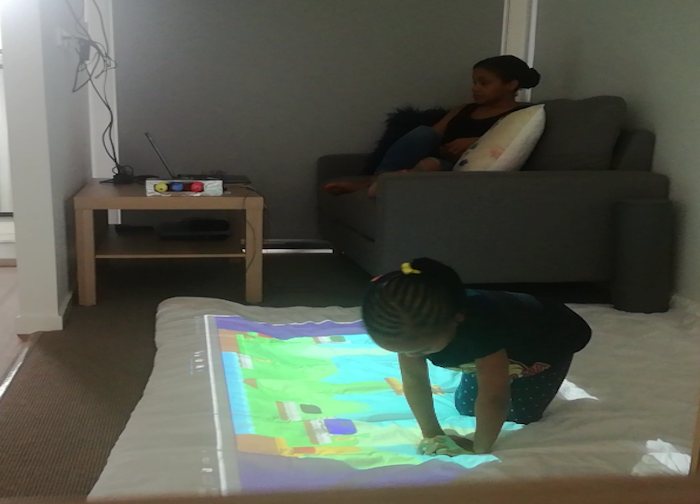 This engaged the child with even more physical movement while using the concept. Again, physical movement is one of the key factors identified in literature reviews to boost creativity and innovation. Physical Movement along with Interaction with Colours are the main components of this concept to encourage creativity in children ages 4-6 years old.

I implemented Open CV hand detection using the following resources: https://github.com/NydanTheReal/OFW . It was a bit choppy in its implementation to be honest and did not interact fluently with game objects such as the birds. Also to use this feature the child had to stand infant of my laptop and not over the actual mat. I could observe that this feature (or maybe how it was implemented) does not readily appeal to my target audience. This is because instead of standing infront my laptop and cautiously moving her hand, the participant kept running over to to carpet, jumping on it and trying to interact with game objects there instead of standing up and moving her hands infront of my laptop. 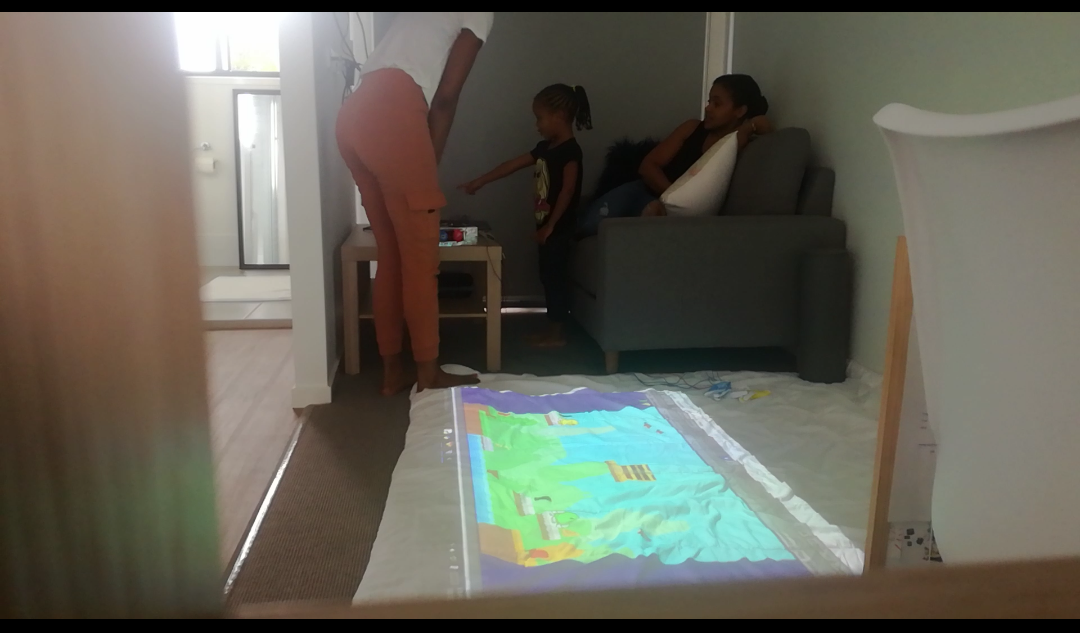 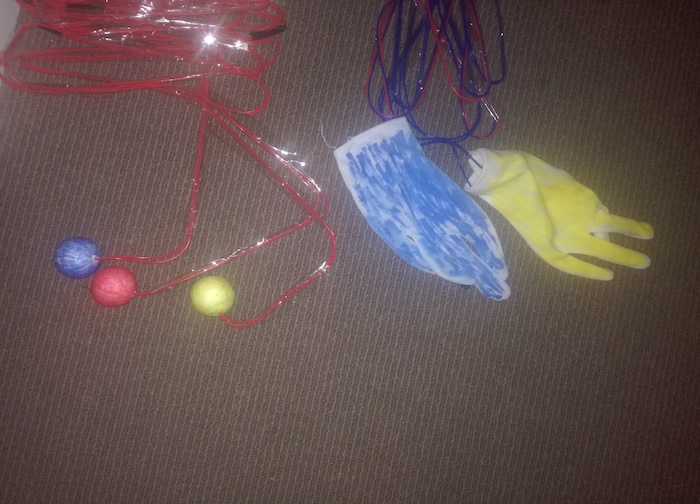 The choice of keeping the glove interaction proved two this also. That is, it did encourage collaboration as the participant and her sister worked together in one round of testing. This was all up to them, without adult suggestion or input, as they decided to work together to collect coins. It made for a fascinating interaction I must say. 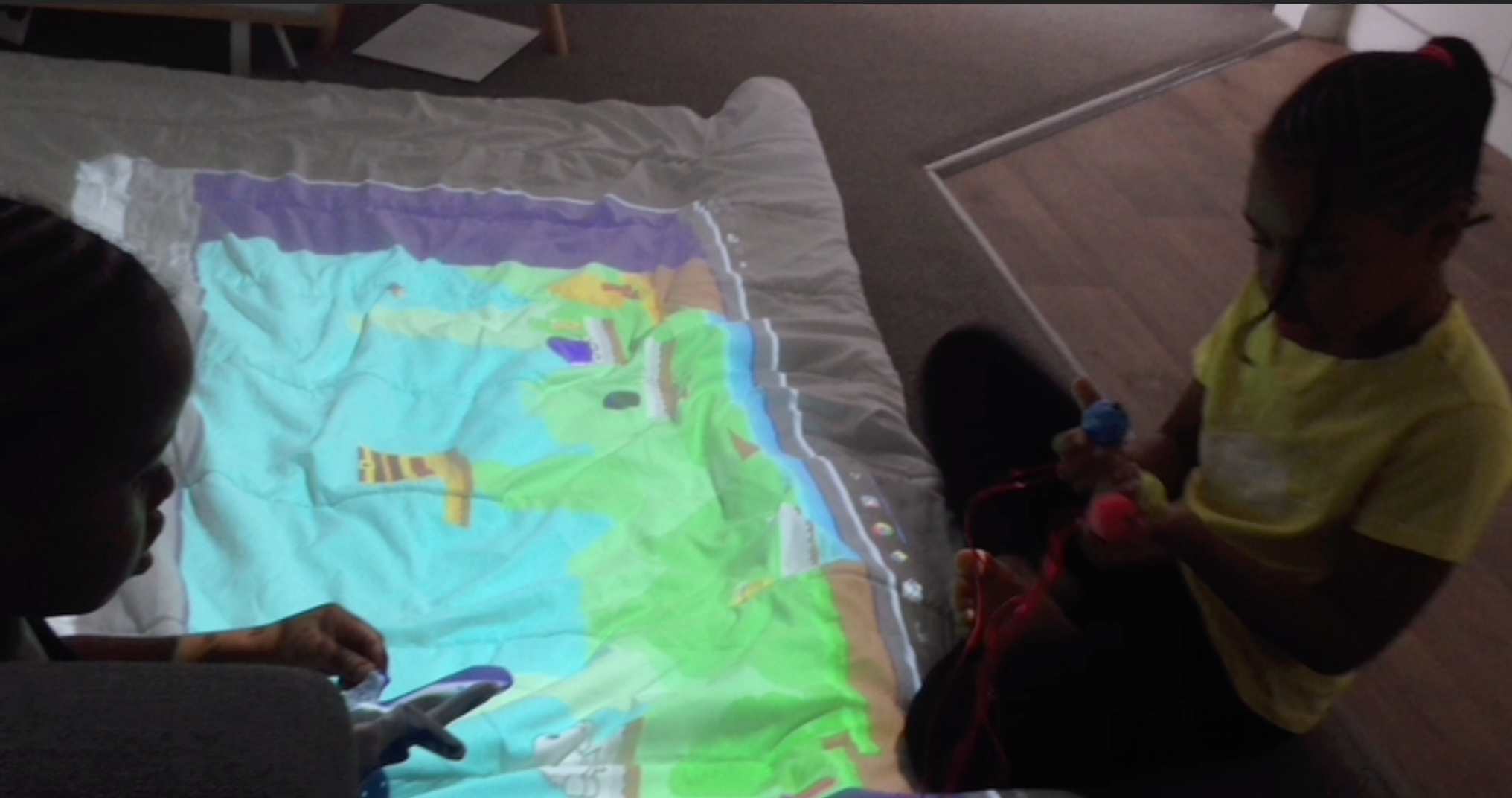 The interactions and testing were recorded and edited for the final prototype demonstration that will be on the Portfolio website for this concept.

Faced with a number of challenges here as files are just disappearing from my projects and also from my website. After days of troubleshooting with Ben’s help we eventually realized the files are being uploaded to iCloud in the middle of my work and each time it did this, I had to download the file and try working on it. Even though we figured out the problem it didn’t follow with a solution. Each time I really had to work on my unity project as though I hadn’t completed before. The same for editing prototype video and working on my website. The temporary fix was to edit it online, incredibly tricky I might add.

Either way, I was able to get things running temporarily and most importantly for the exhibit to come. I have tested OBS with my phone as an additional camera and that works perfectly. Still nervous for the exhibit, especially with my devices but I am hoping for the best, I’m really excited, and I think it will be okay.

This week I also completed my section (summary) for the team report. Collectively we shared our approach to the problem space and possible contributions made. It would actually be really cool to see all four parts of our concept come together to form one big project. That would be interesting. Overall Reflection is that I am proud of the work we did to get us to this point in the course and to see the journey of developing our concepts.