Yesterday, we started with looking at the ideas people have had over the first week. Aware of the fact that this is just a bouncing off point, it felt a little early to give strong or detailed criticism about any of the ideas.

Obviously the following quite the unfair assessment , but there wasn't a feeling of being awestruck by the potential of any ideas, although I did see some ideas where I could picture myself contributing significantly to an amalgam of them.

That being said, particularly meaningful for me were ideas from the dozen or so designers who were students of mine in a previous course, it was exciting to see the industrious spirit toward design they had there carry forward here, I can't wait to see what they make next.

We didn't have many horrific ideas... I was sorta expecting to hear more things that made my bones rattle in disgust and intrigue at how we could make something really out there, a real life thing to inflict upon the world.

I guess it's because it's still early in the semester. People want to put their best foot forward, and not be remembered as a sociopath. An understandable position, I think I make many people uncomfortable, and as little of that as possible would make finding and maintaining groups easier.

I even went with my safest, most milquetoast idea to do the same - maybe once we are more familiar with each other, it'll be cooler to expose our more twisted machinations.

Sharing an idea is like exposing a part of yourself, a bolt of electricity bursts out of your mind and onto a piece of paper. Hm, actually, is the idea in truth really just a part of you? Perhaps this fear of sharing something that troubles people is because of the perception that when people reject your idea, it can sometimes feel like they reject you?

But it's nothin' personnel kid. People rarely hate you (I hope). I think even when they dislike the idea, they rarely come to a wide eyed, narrowed pupil realisation about you and recoil in horror, just because you said a thing. Maybe the vast majority of people tune out unintentionally, and are just involved enough that they can keep track of things, but strong emotional reactions, positive or negative, are to be earned.

I was captivated by Seamus' idea for Smoker Baby. I envy the will to bring it forward. The kind of thing that makes me wake up at 11.50pm even after I headed to bed early, to start writing about it. I hop around my apartment in anticipation at how crazy we could make that. Like, having the doll be on a podium in the middle of your house, a pedestal where you cant reach it, and if you smoke, it breaks down, and you cant do anything about it. You now live with a skeleton doll, that you wake up to every morning.

A deteriorating voodoo doll kinda thing isn't something you hear about every day, and I almost want to pick this up and turn it into an amalgamation of small "oh nos" that make me seriously reconsider my life up to that point. Like giving the doll a bunch of extra arms, and animatronic components, so that it literally falls apart if you pick it up after smoking...

Er... alright, might have dwelled on that for too long.

Reactions weren't even excessively strong, maybe there was room for A Cog for the Machine or Panopticon Go-Karts after all.

Ideas from early in the first session stood out the most, likely because it still felt fresh to hear the ones that came up early. Critiques only being two minutes or so long meant that for some of them.

Especially in the second half of the session, I found myself feeling less willing to give detailed and concise feedback... it felt like some of my critique there was a bit too nitpicky on ideas that were otherwise alright. 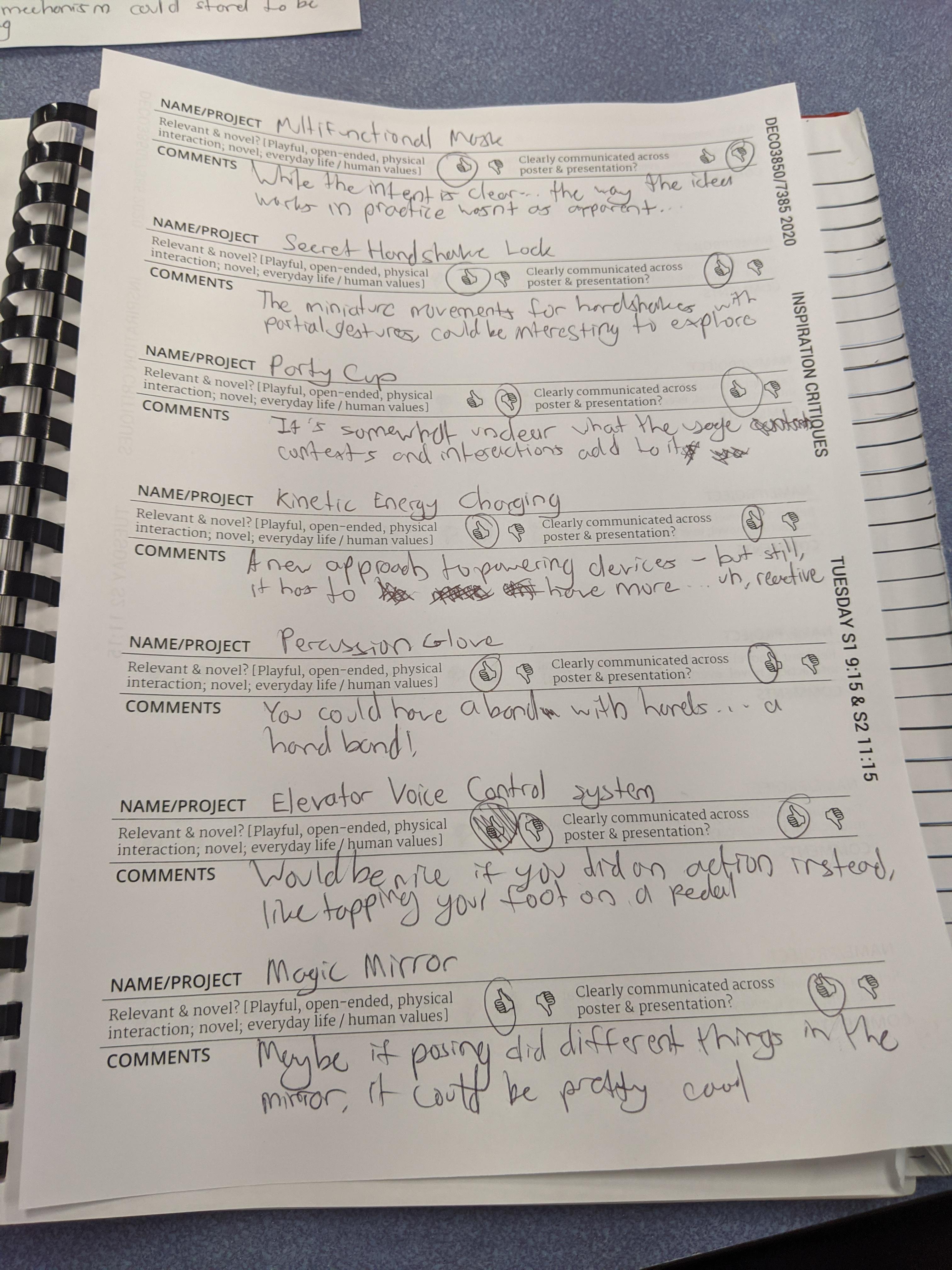 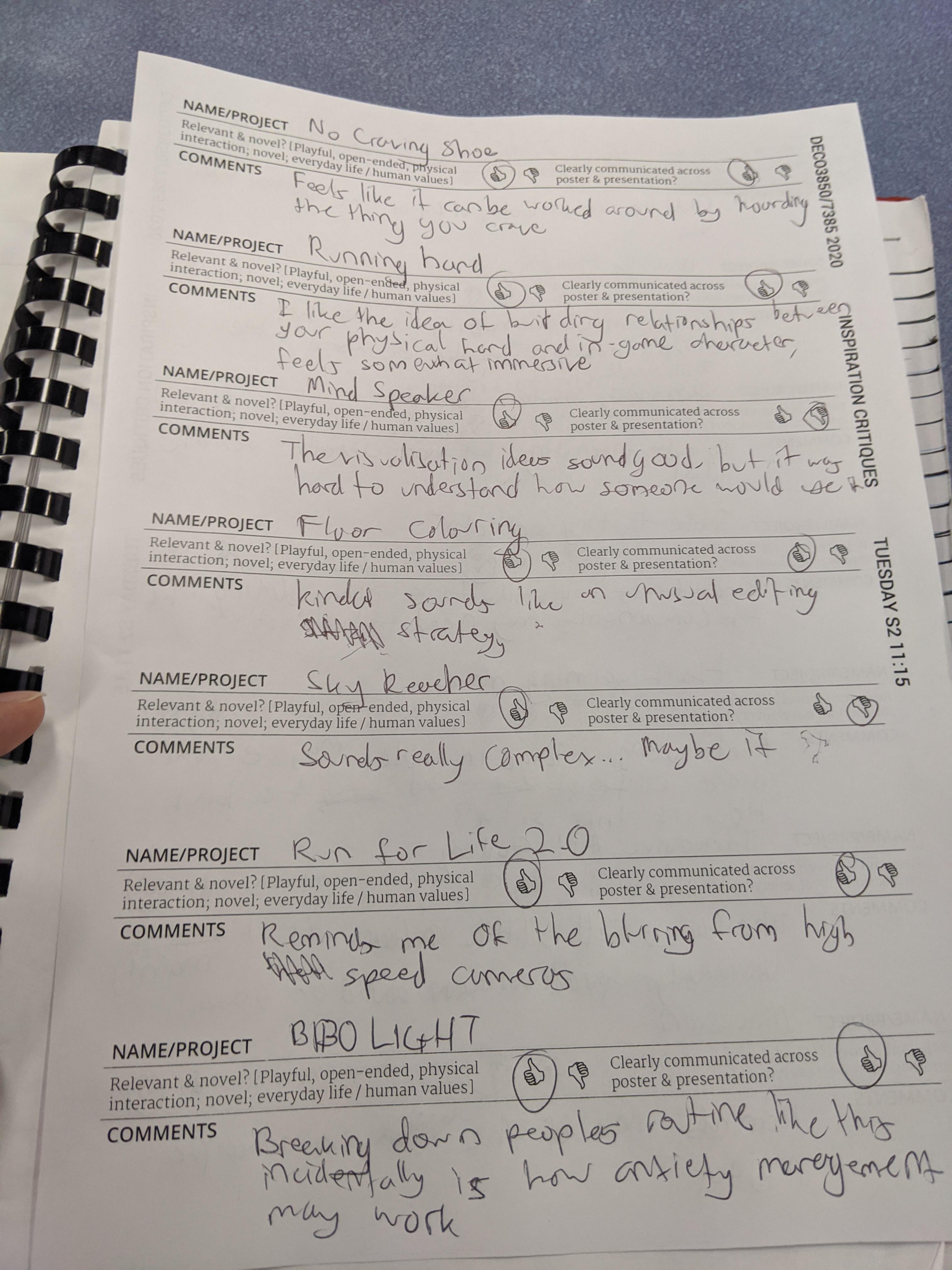 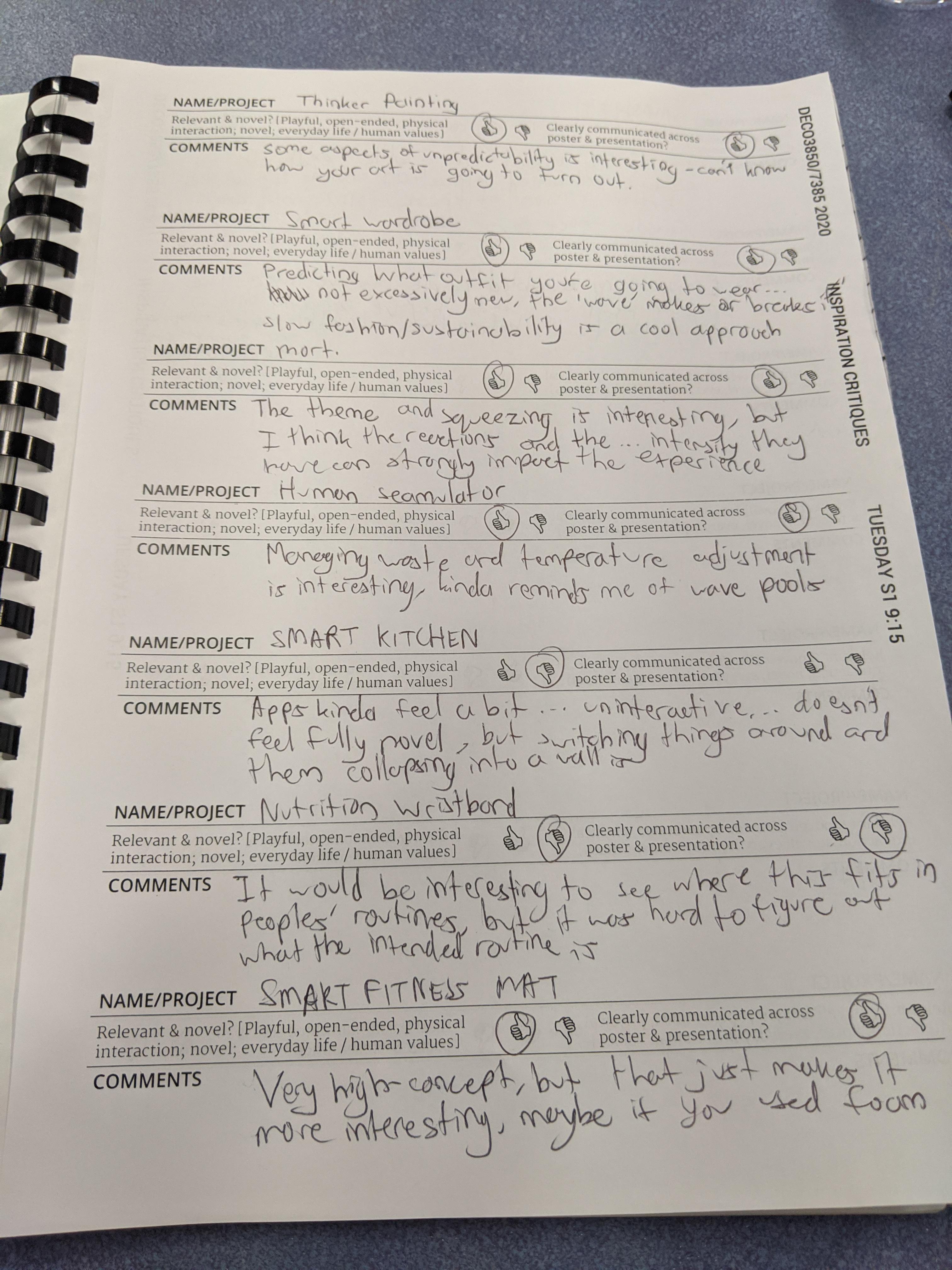 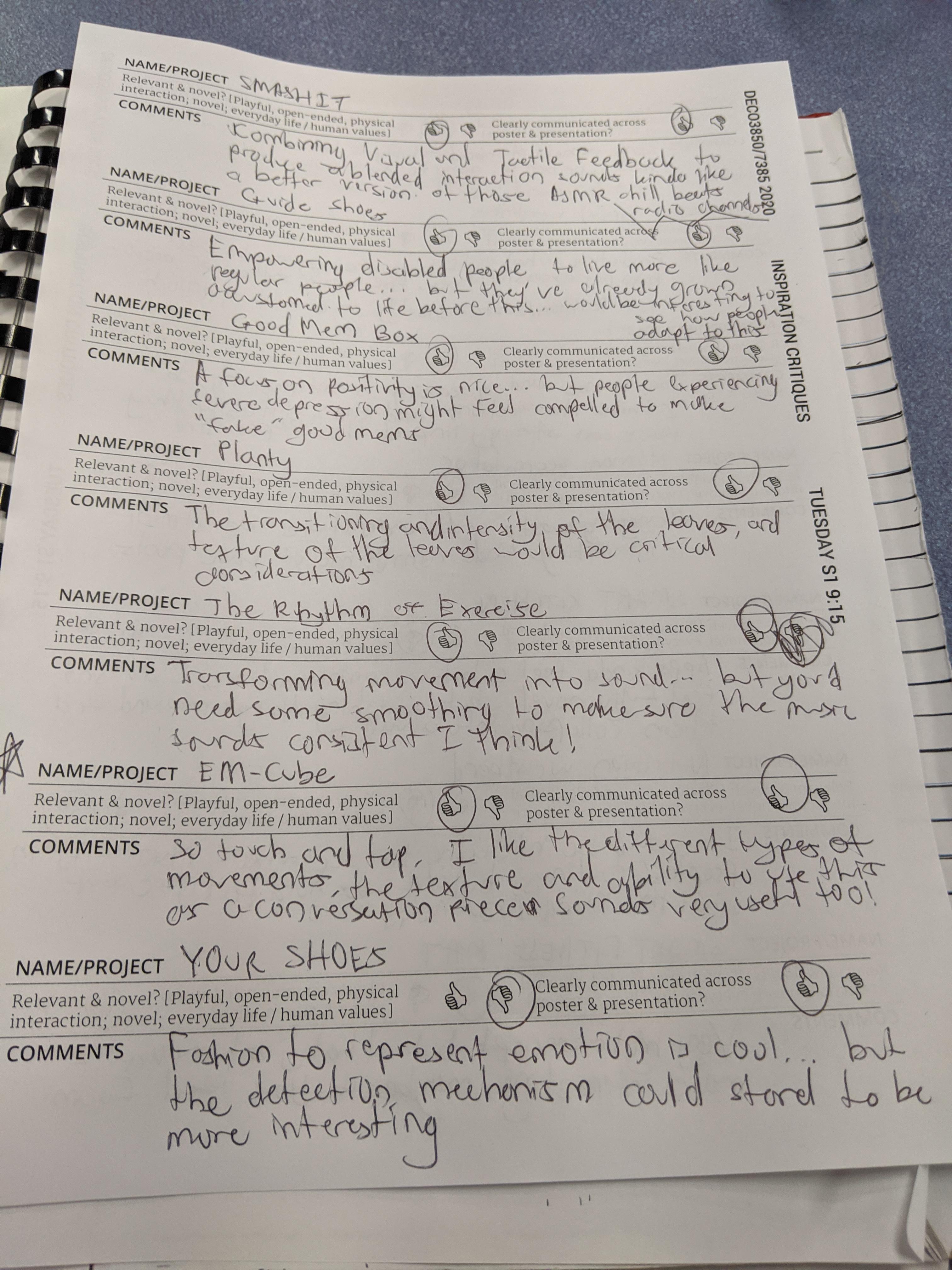 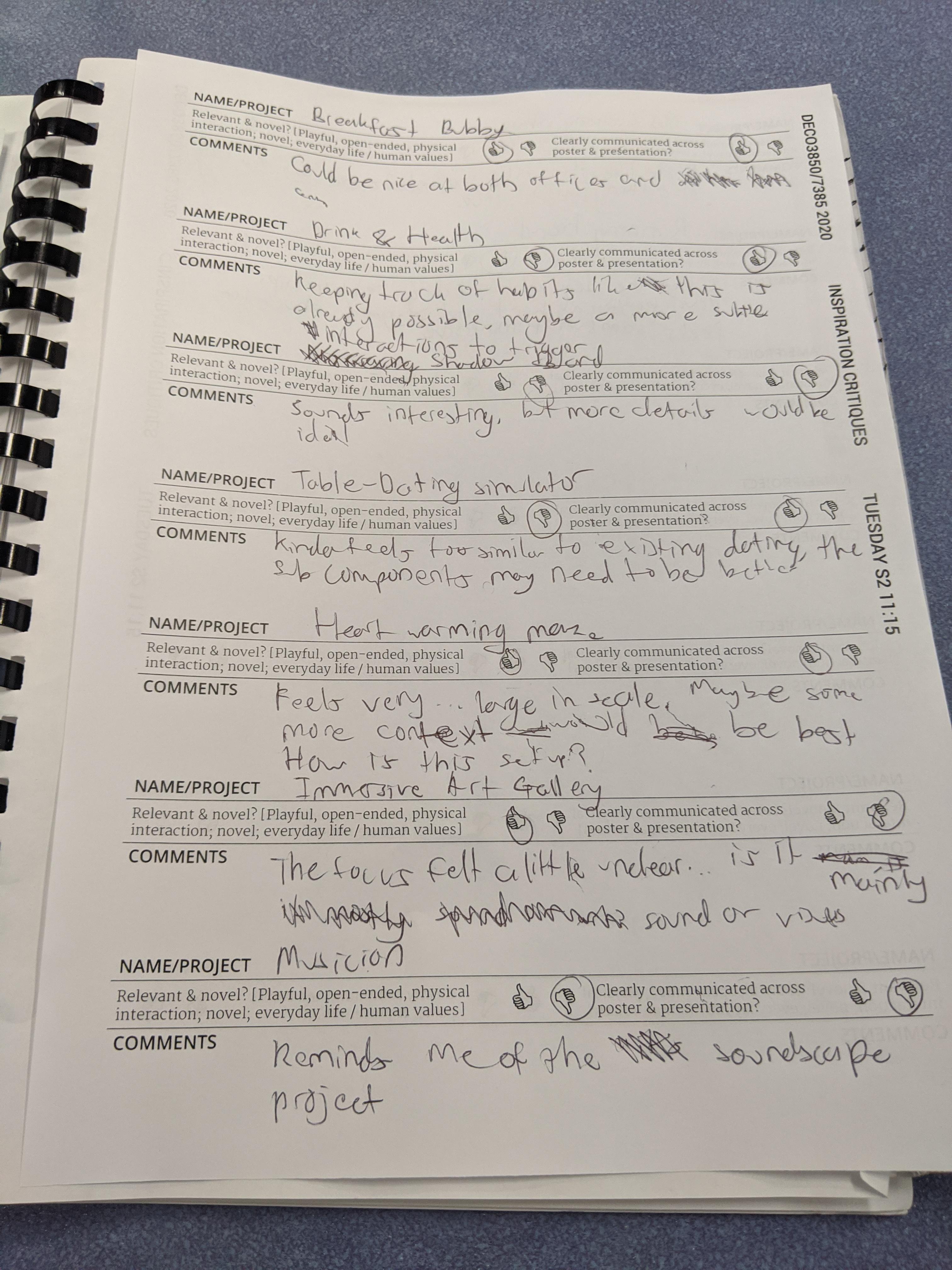 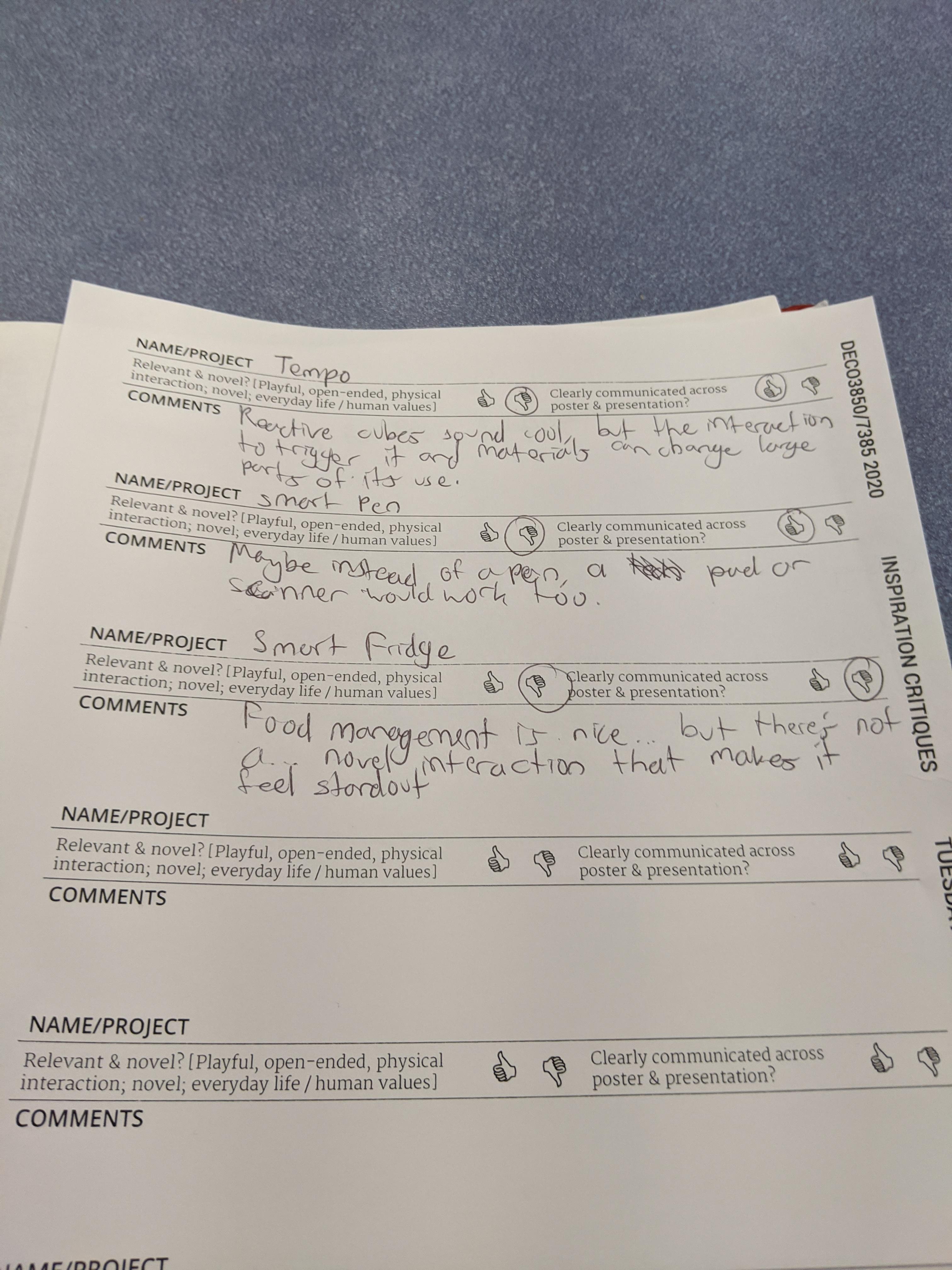 The theming session that followed was... alright. Could have gone better I think having everyone in the room work on it individually meant that there was... a lot stepping on each others toes metaphorically speaking, and more repetition than necessary. 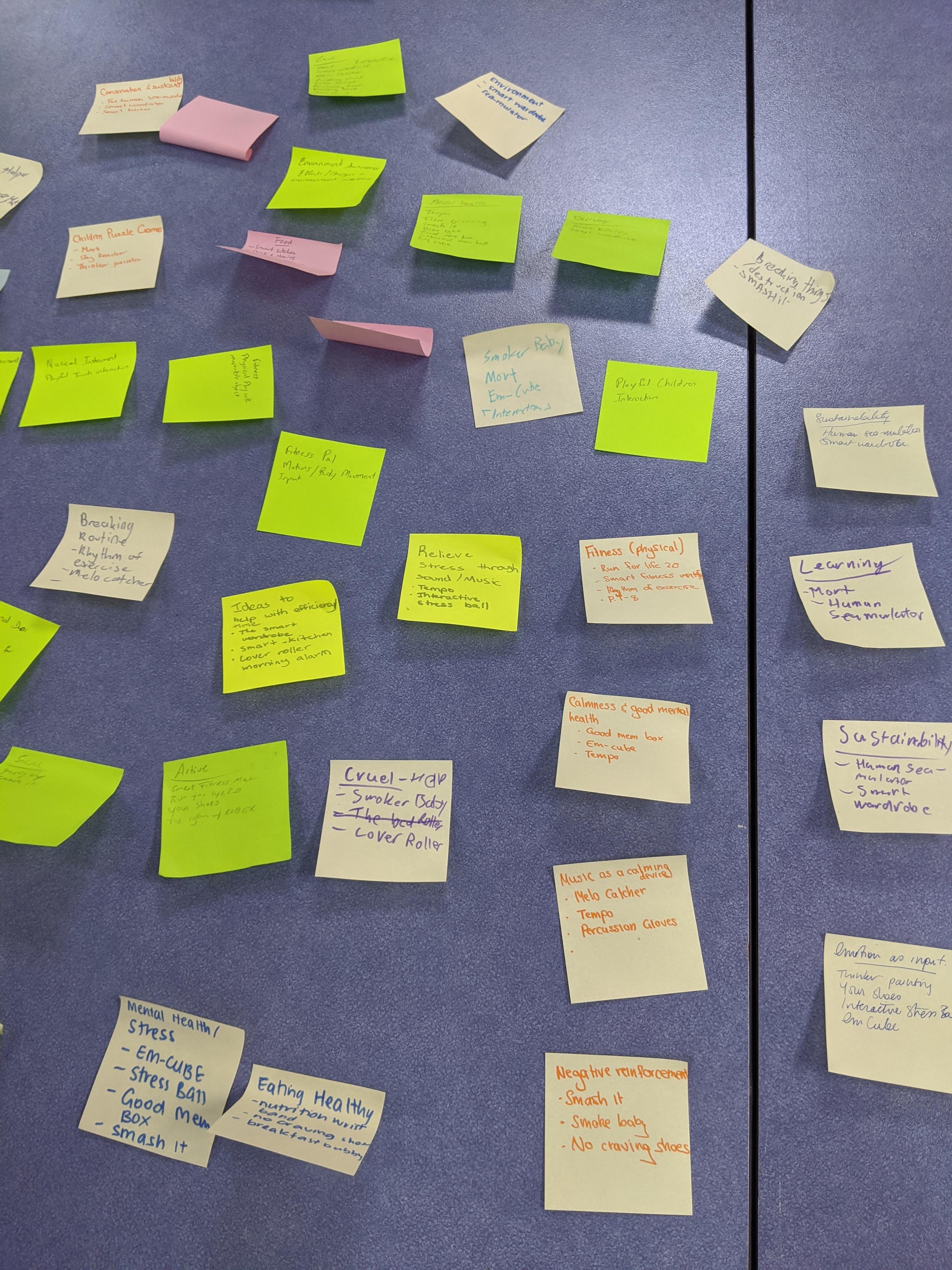 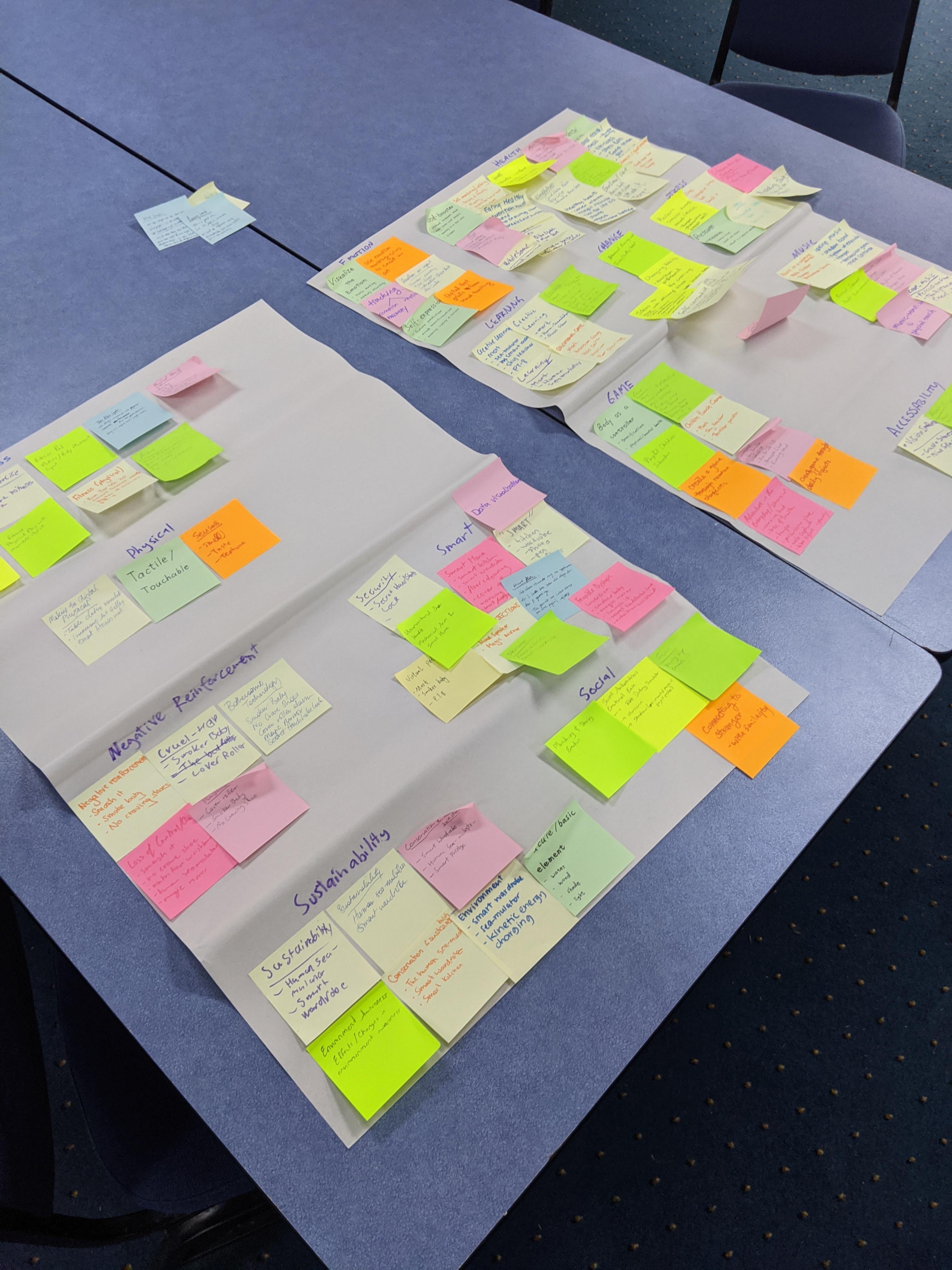 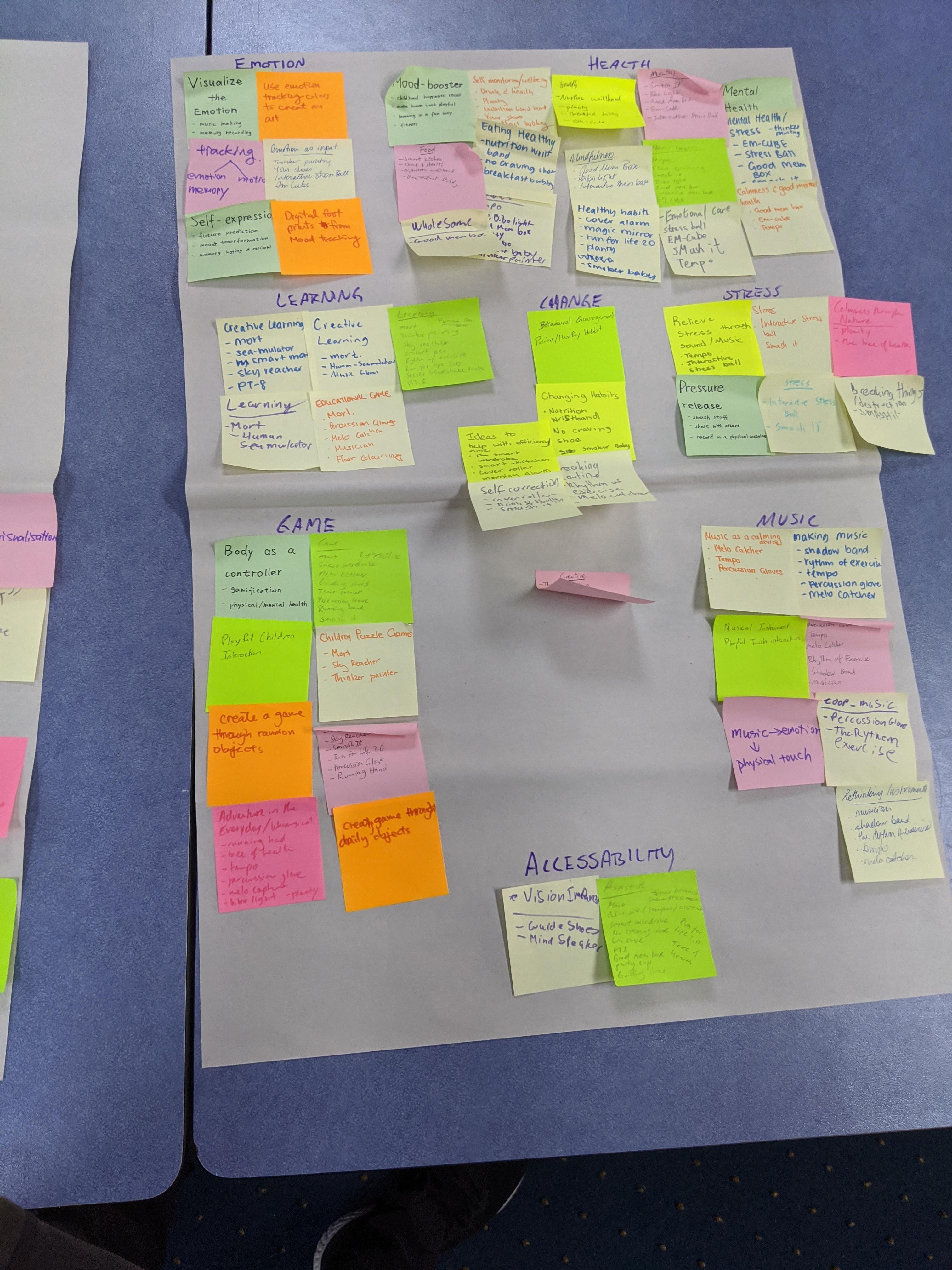 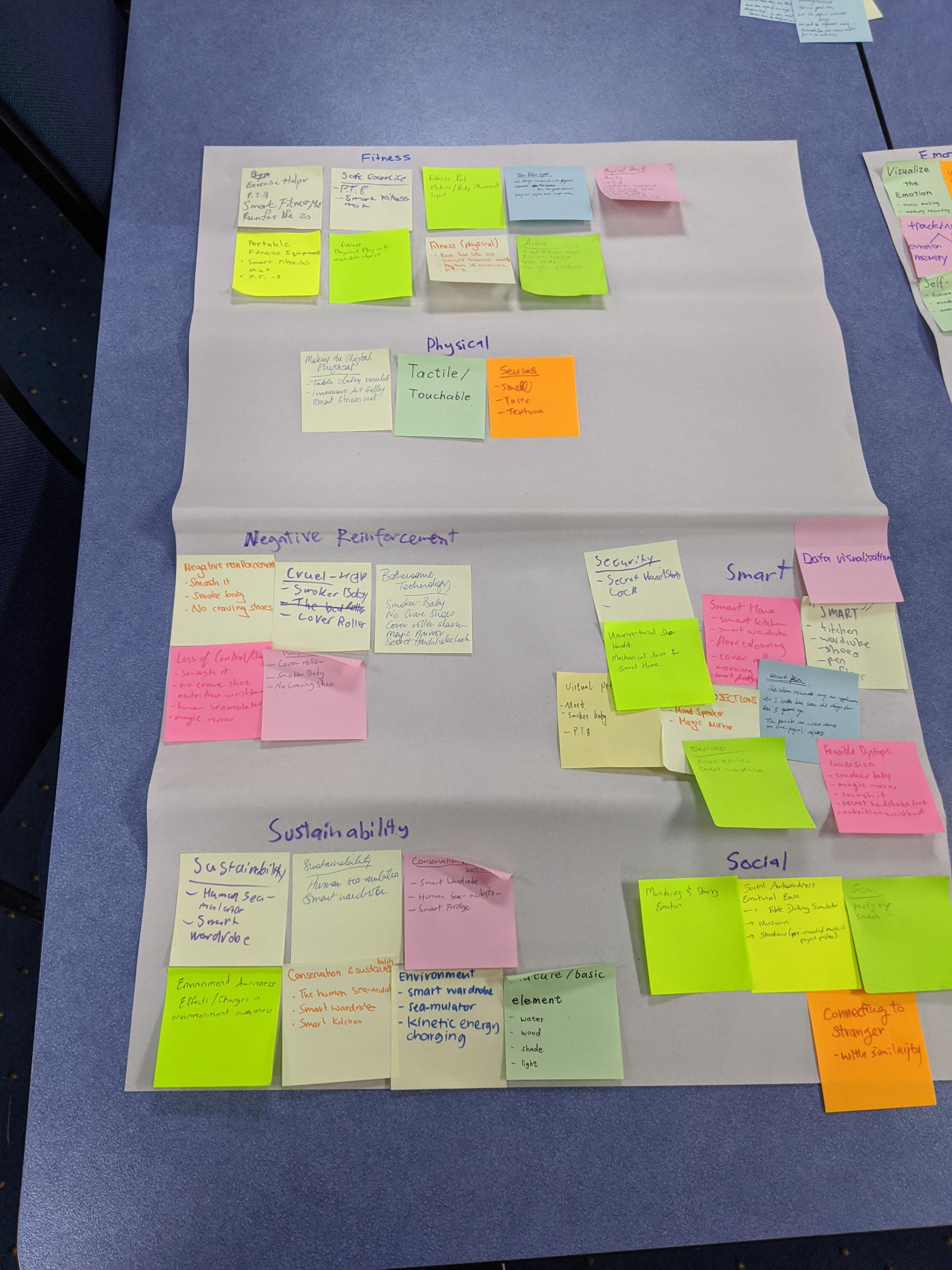 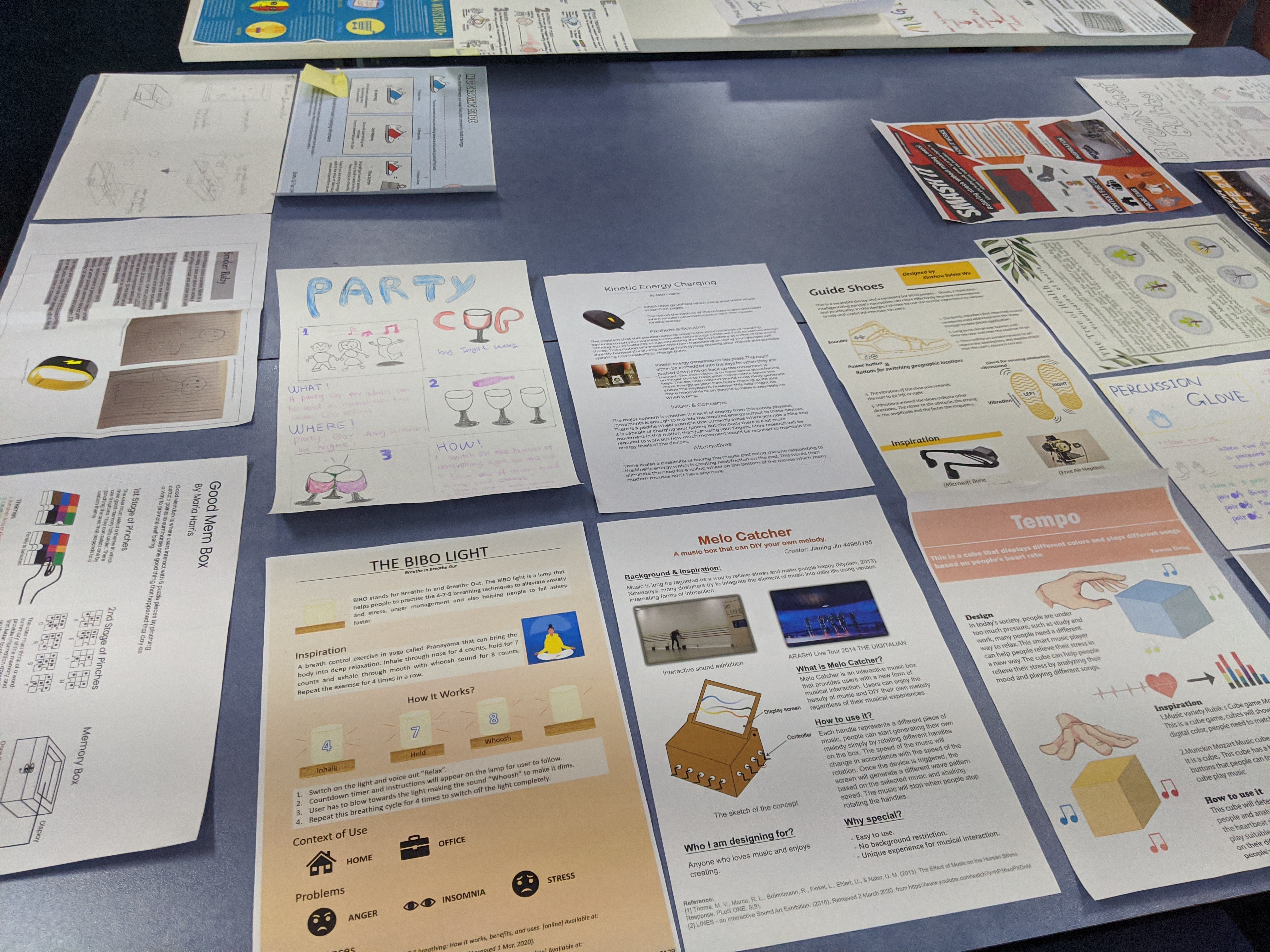 An endless sea of ideas... just waiting to be butchered.

I didn't feel too useful after putting down two or three post its, and took a step back to reflect for this entry rather than participate in the arranging of the post it notes into themes. Maybe the issue was just too many hands in motion, going in different directions - so parts of it felt incoherent.

I found myself more helpful when trying to break down my thoughts out loud. A chance at conversations and some exposure to other people' perspectives, and explorations on what happened today, and even last year too - given Allison mentioned some projects last years students came up with.

I'd be inclined to say this tendency to pull back and think was more useful to myself, than the collective, so for tomorrows session I might try doing something different - although I think that in this kind of activity I'd simply be strongly inclined to pull ideas toward a topic I want to cover for my project, which again isn't great, but it's not as... disengaging as just hopping out.

Maybe we could have people with explicit roles - everyone still writes down their points, but we have people whose tasks it is is to collect post it notes into themes, and people whos roles it is is to place those post its in the final positions. Then, after x amount of time, the roles get switched

Here would have been a good time to break down the common themes... I think I'll need to follow this up tomorrow with a collection of all the ideas... I feel like some of my perspectives may have... less legs to stand on once seeing what the remainder of the class has in the cards.