In week 2, on Tuesday, after all the presentations for session 1 and 2 were completed, the posters were laid out on the table. Everyone then had to come up with themes to group ideas together. This was put on post-it notes and placed on another table. Once everyone had exhausted ideas for themes, similar themes were grouped together. Different themes were Emotion, Health, Learning, Change, Stress, Game, Music, Accessibility, Fitness Physical, Negative Reinforcement, Sustainability, Smart and Social. Common themes included Health, Fitness and Smart. This exercise was interesting to see what people in the contact were focused on or interested in that would improve people’s lives. 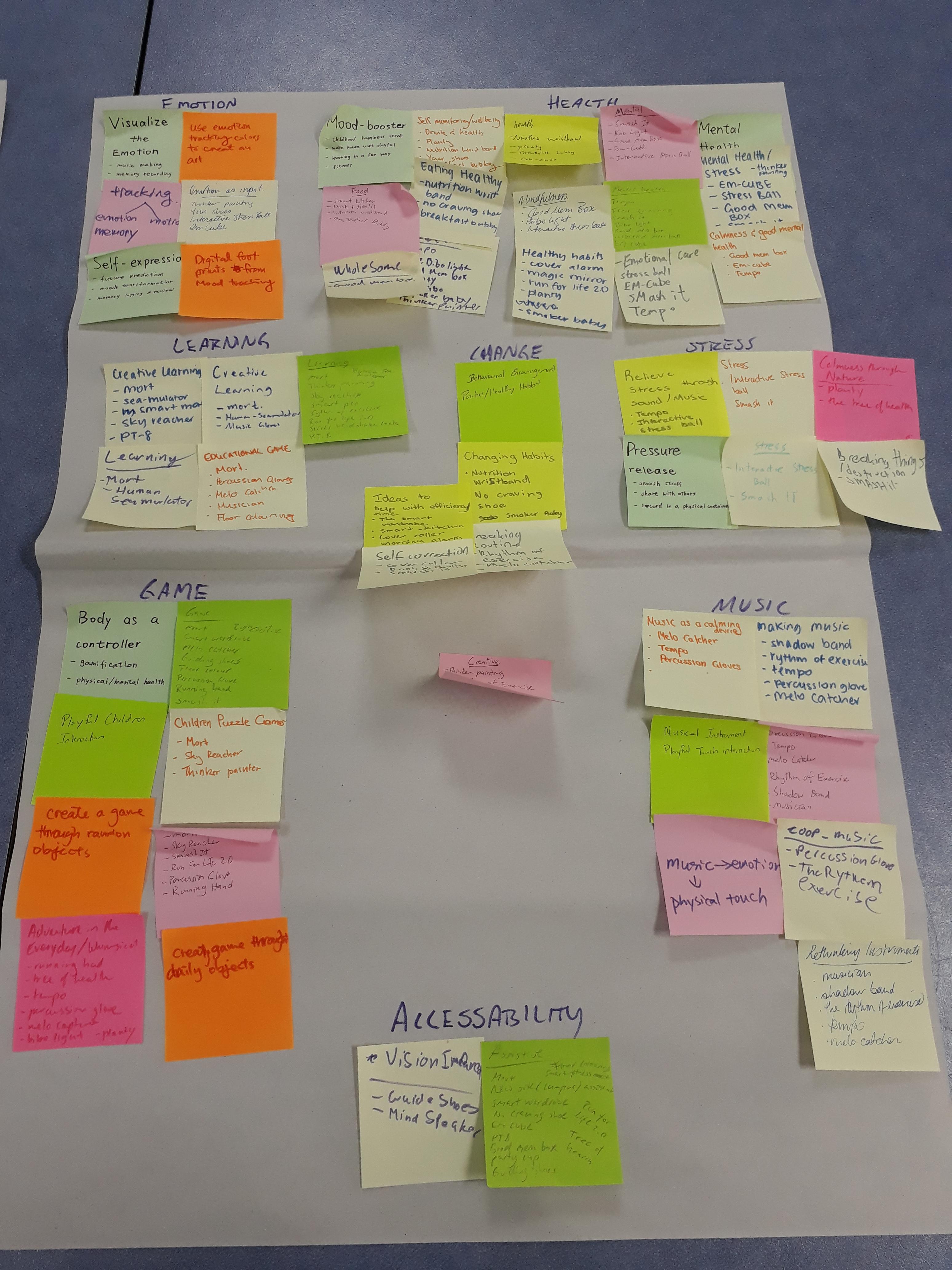 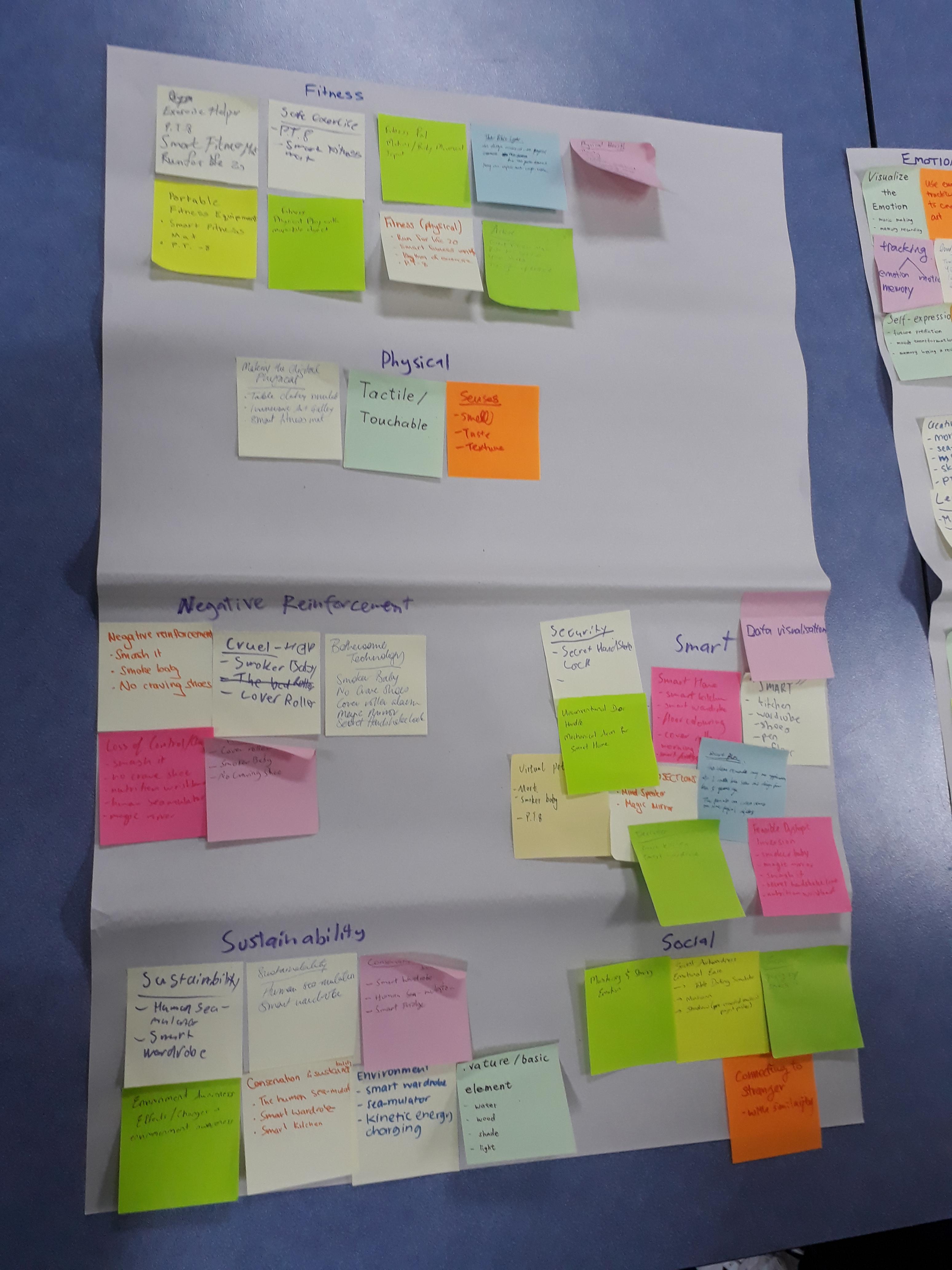 The next day, the same exercise was done again with all posters. Some of the same themes were used while new ones were created. In the second attempt of the exercise, there were more themes that were common such as Music, Smart, Emotion, Behavioural Change, Environment and Learning. New themes that emerged were Memories, Learning, Colour, Kids, Wearables and Physical. 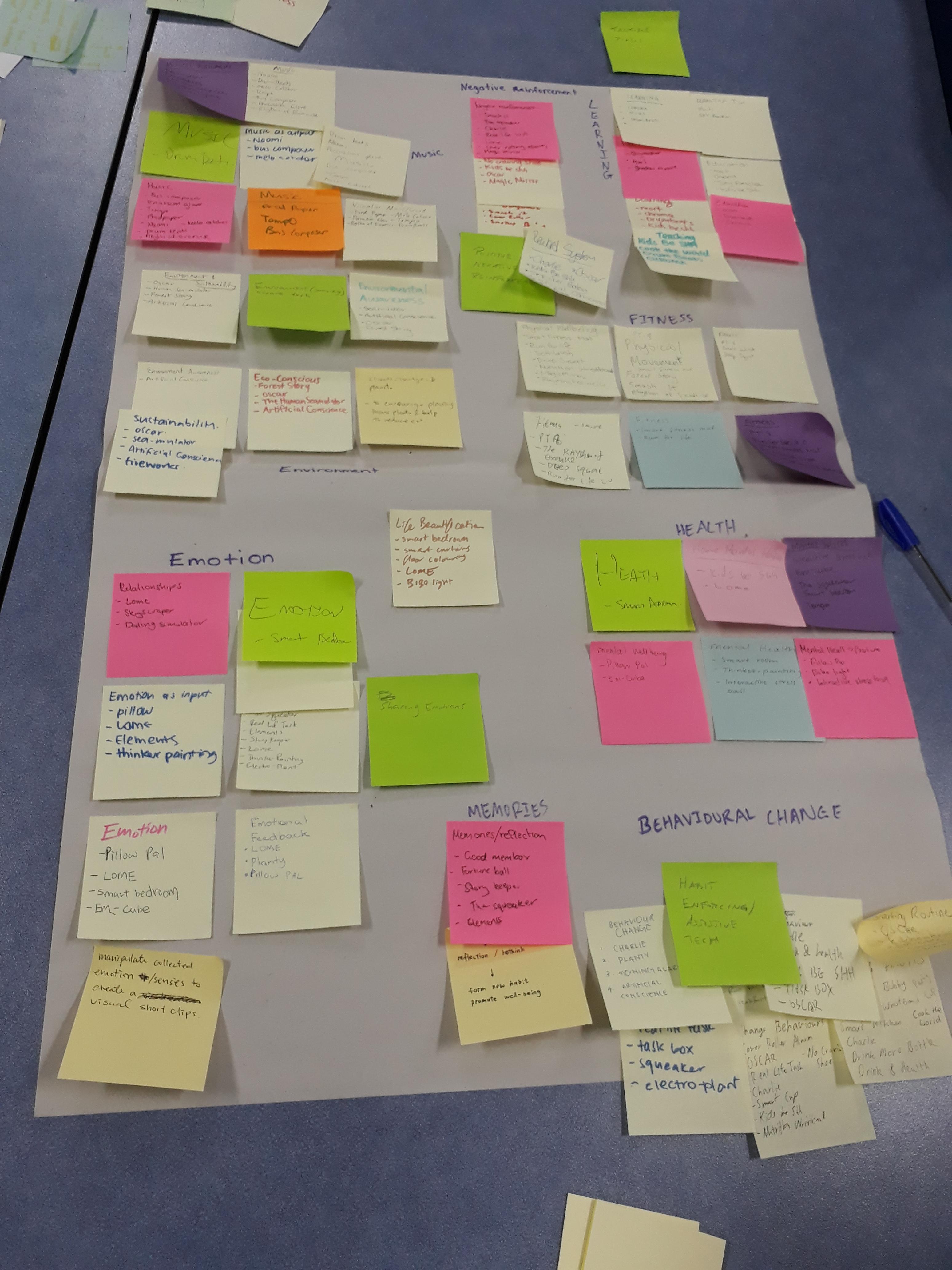 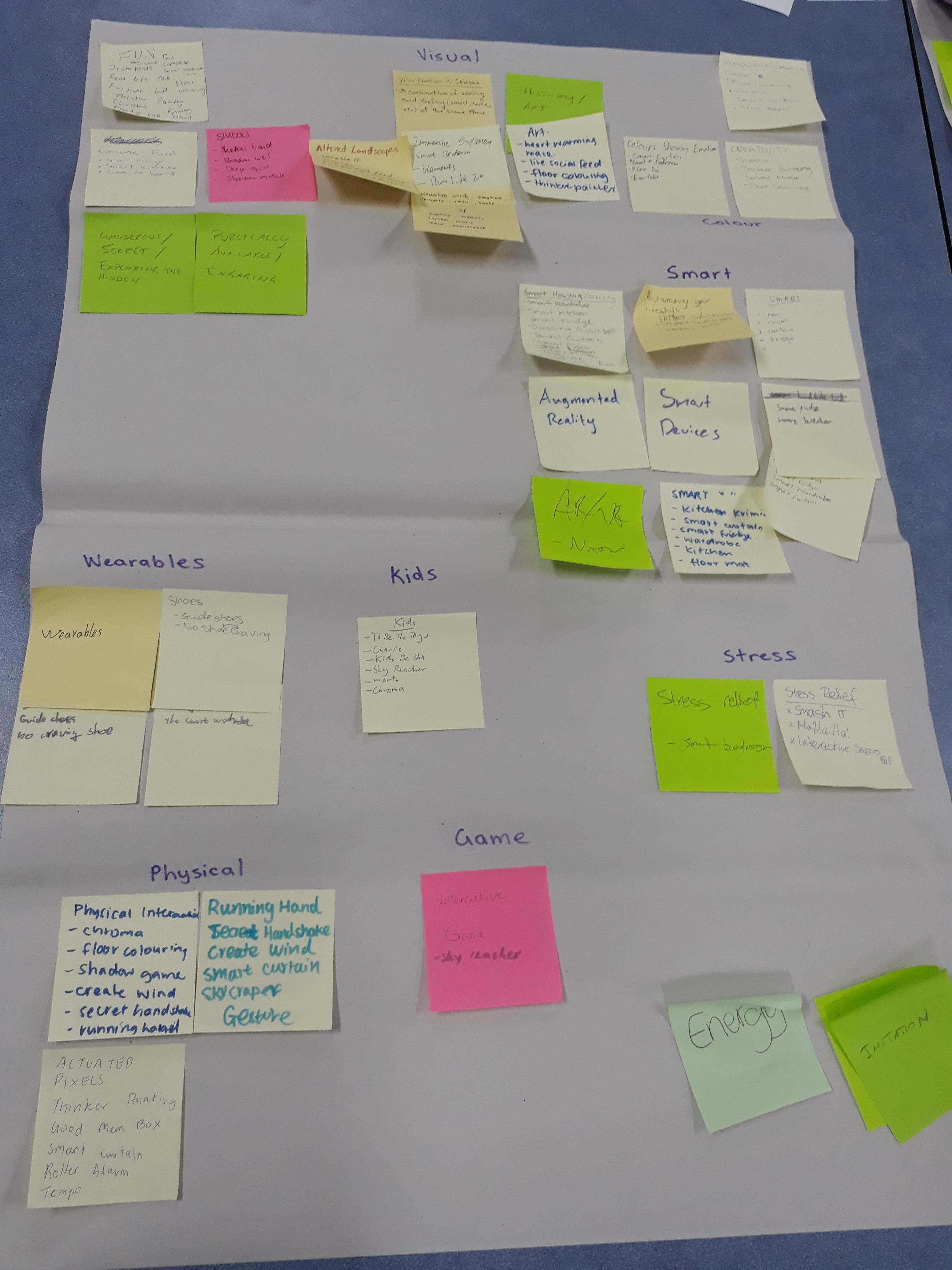 The next exercise was to make the themes more specific; where similar ideas were grouped based on the concept itself rather then the technology used or general themes. These themes were put on the whiteboard with the ideas that related to them. 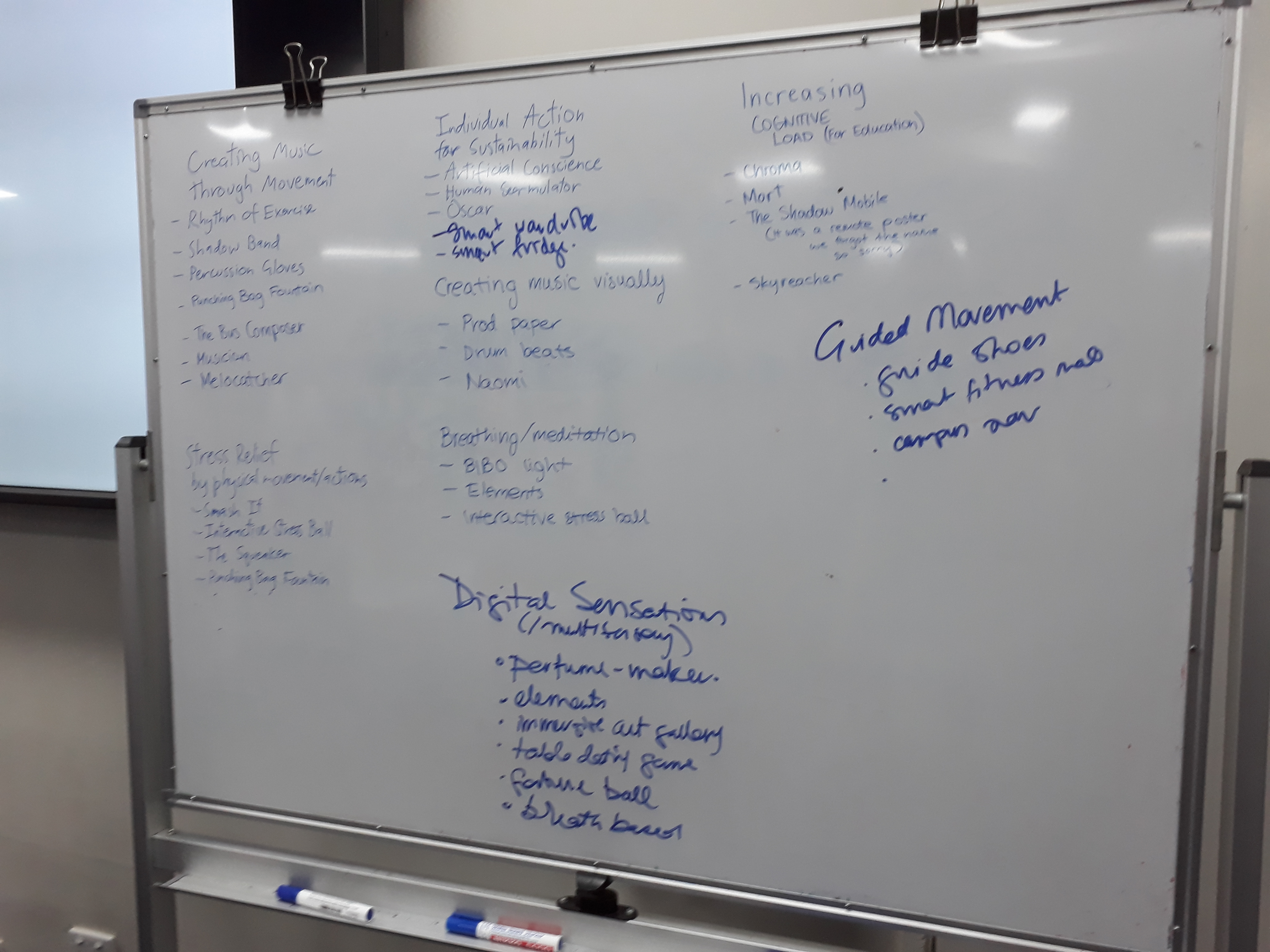 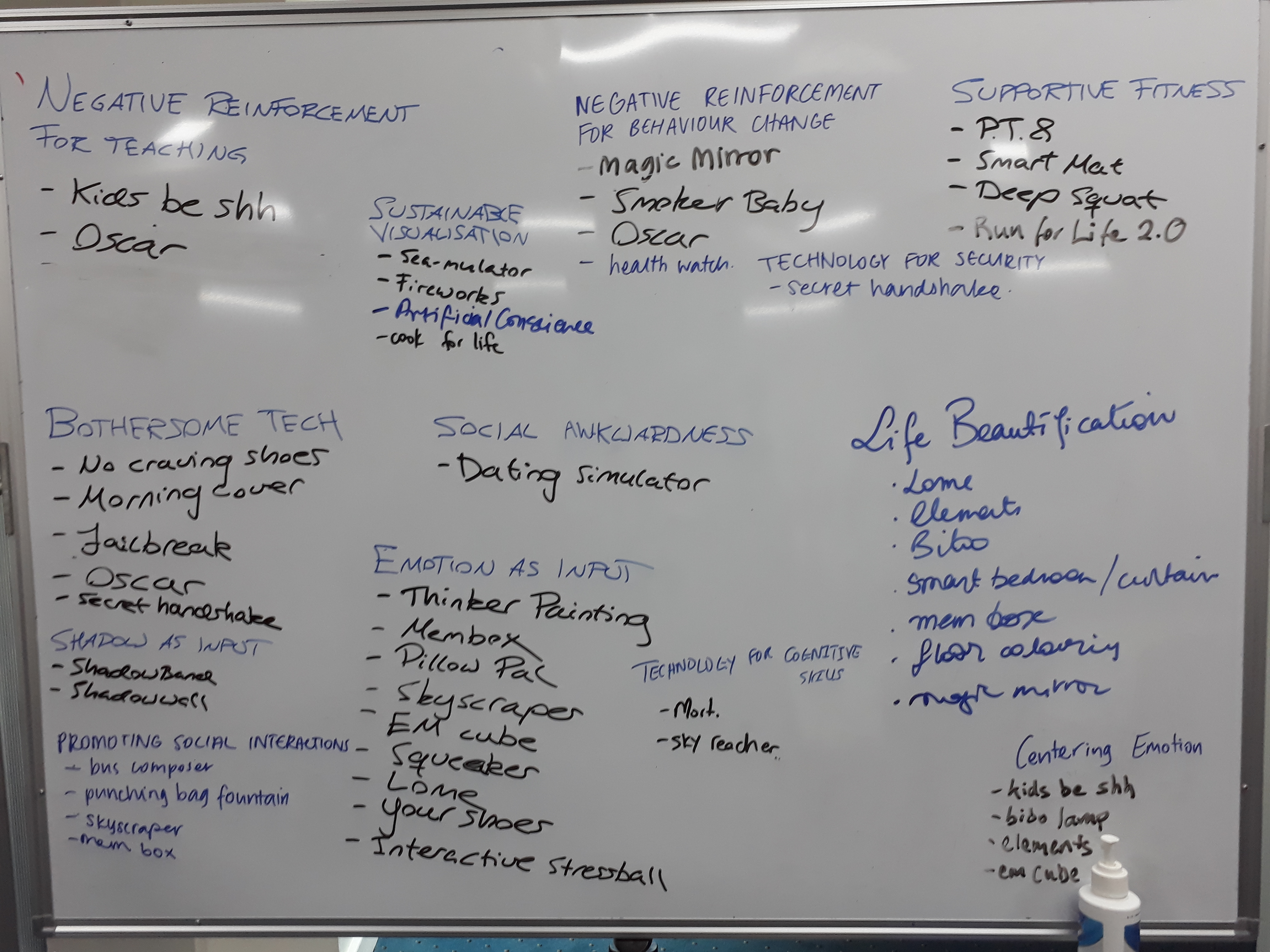 Next week, ideas will be created and explored that relate to the final themes.

Comments and Critiques were given about each presentation. They are useful tools as it allows people to be informed about what could be improved or expanded on, what works, how people view each other’s ideas and whether they are interested in the concept. Some of the comments were interesting, confirming or indicating if the idea was to be further explored. These comments were on issues with privacy. Not everyone would want to document good moments every-day and people who are suffering a mental illness might feel pressure to fake good memories. These comments would be useful to help improve the idea by making it more appealing to a larger group of people or explore how this idea could benefit but not cure people suffering from mental health. One of the comments was interesting as it focused on privacy. This particular critique would encourage me to think about how my idea could be used negatively rather then the way I expect it to be used if it were to be further explored. As the person who created the idea, it is not always easy to think about how it could impact people because, typically, we come up with, and create, concepts to improve people’s lives. There are no current privacy controls in place, however, it would be interesting to think about what information people would have access to and whether that would affect the user greatly, out-way the positives.