From the beginning of the semester, I saw world cafe in the schedule and was immediately intrigued. As a result, i was looking forward to today.

I found out that it worked by sitting at tables of about 6 around a theme, then discussing and iterating various concepts.

My first table was for musical things. What we focosed on was the punching bag musical fountain, where users could punch it to destress and have the fountain and music adapt to the punches. This reminded me of performances such as Master of Tides by Lindsey Stirling and Kairos by Derek Hough, which led me to think that it could be further developed as an unique element to similar flash mobs, where beat heavy music could have punching incorporated into the choreography and have the water be synchronized to the performance. 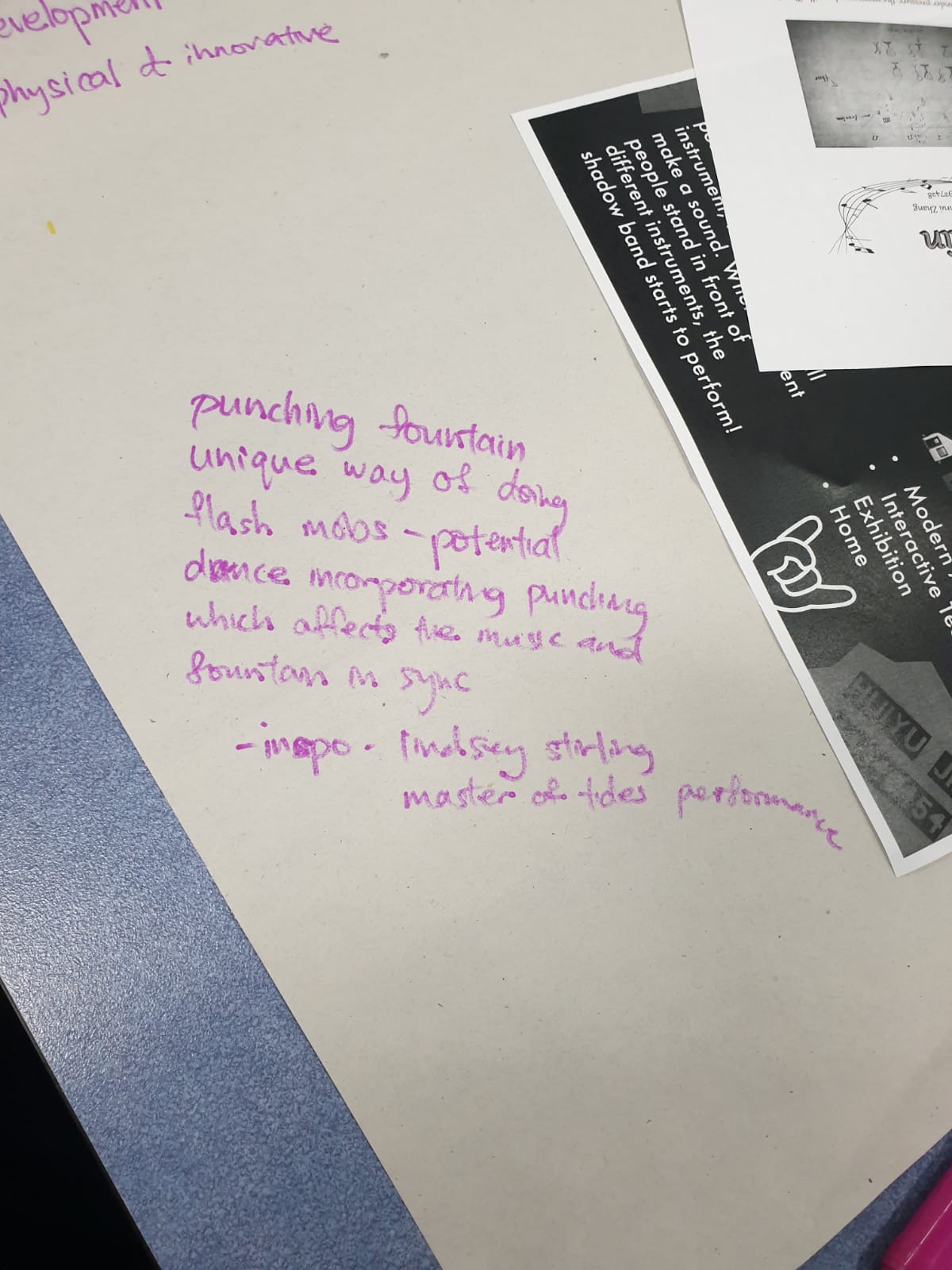 Another table that stood out to me was Bothersome Tech. The cover roller morning alarm seemed like a great way for users who have trouble getting out of bed. i thought more interactions could be incorporated, such as snooze functions, or having the bed vibrate. I thought this could be incorporated with my own concept, the smart curtian, where the curtains turn fully trasparent or open when the alarm rings to let light in, or having the user get out of bed to open the curtain to shut the alarm off. 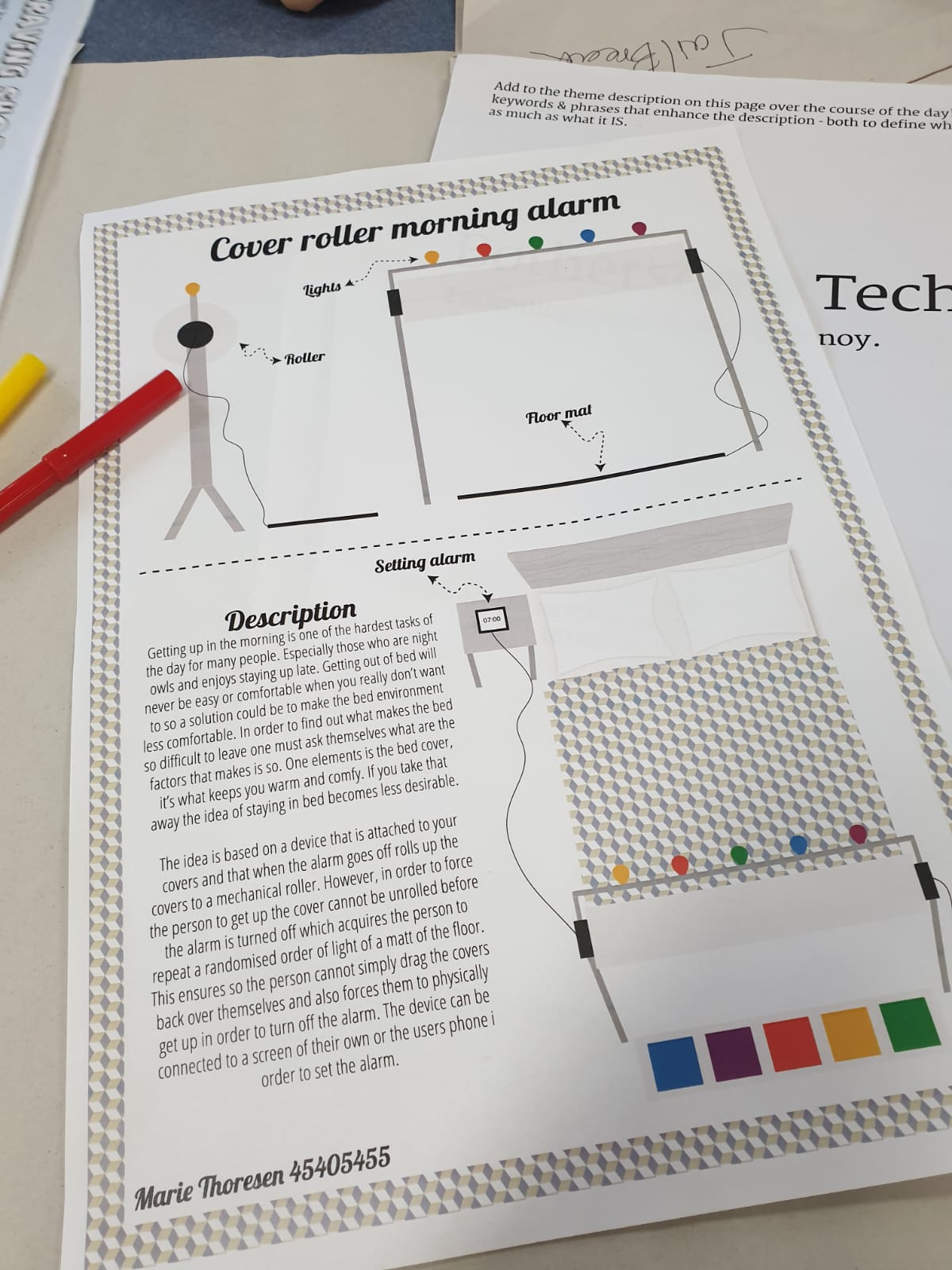 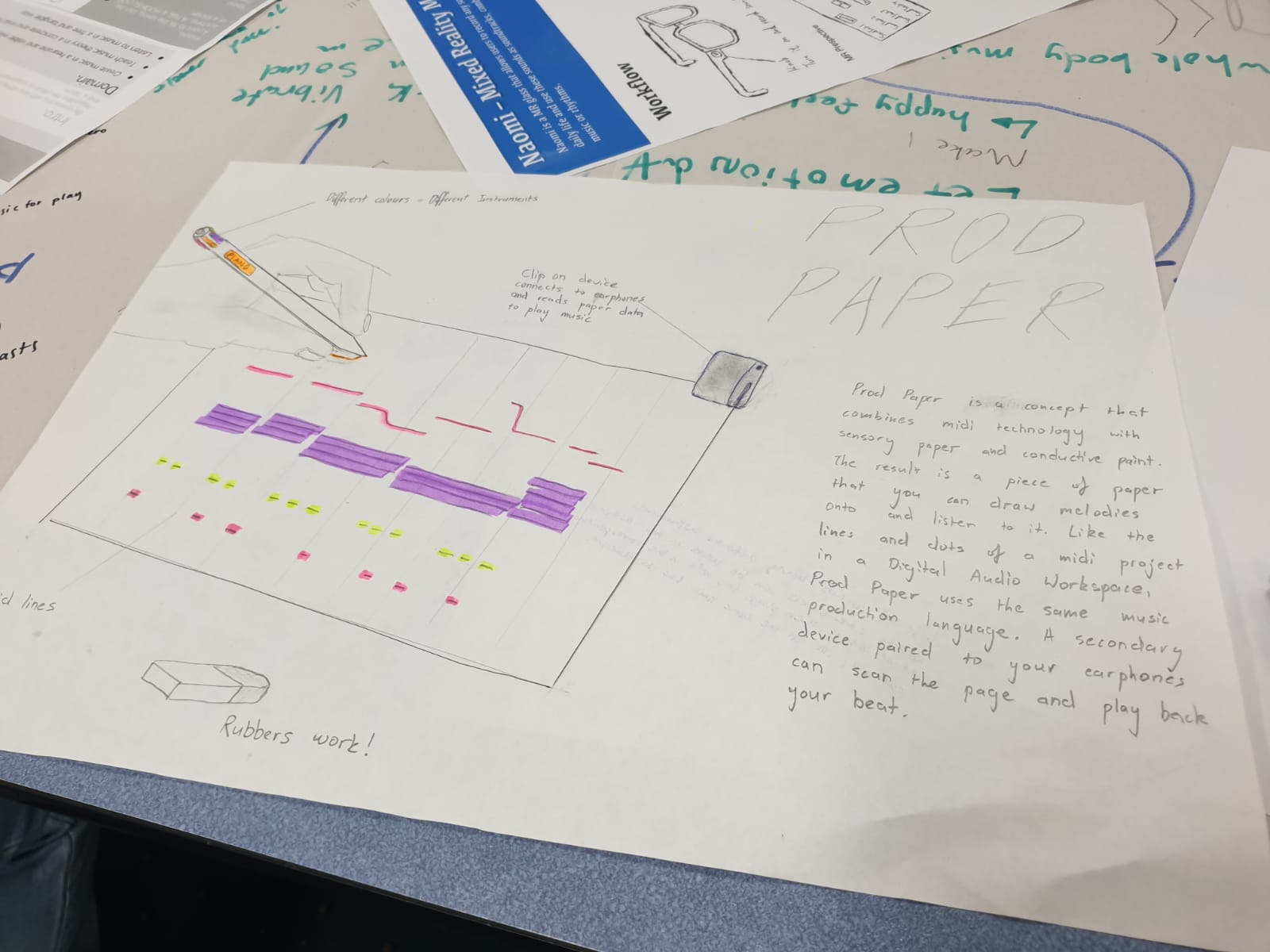 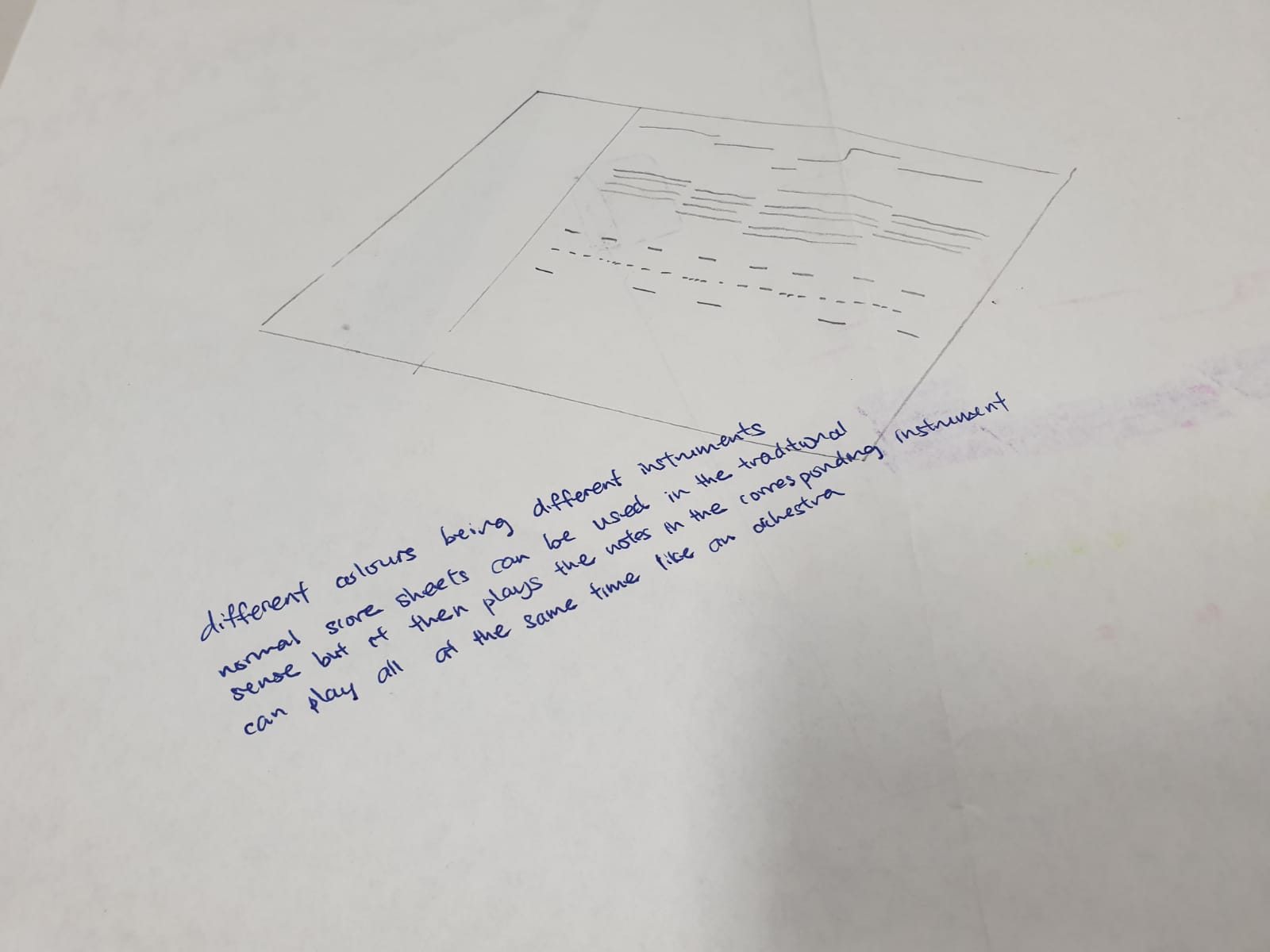 The percussion glove, which makes various sounds based on hand shape, could be further developed for use with a guitar or piana, where the various shapes made could play accomaniying drumbears, or the user could use the hand shapes while playing the guitar for drumbeats, which could be useful for buskers or one man bands. 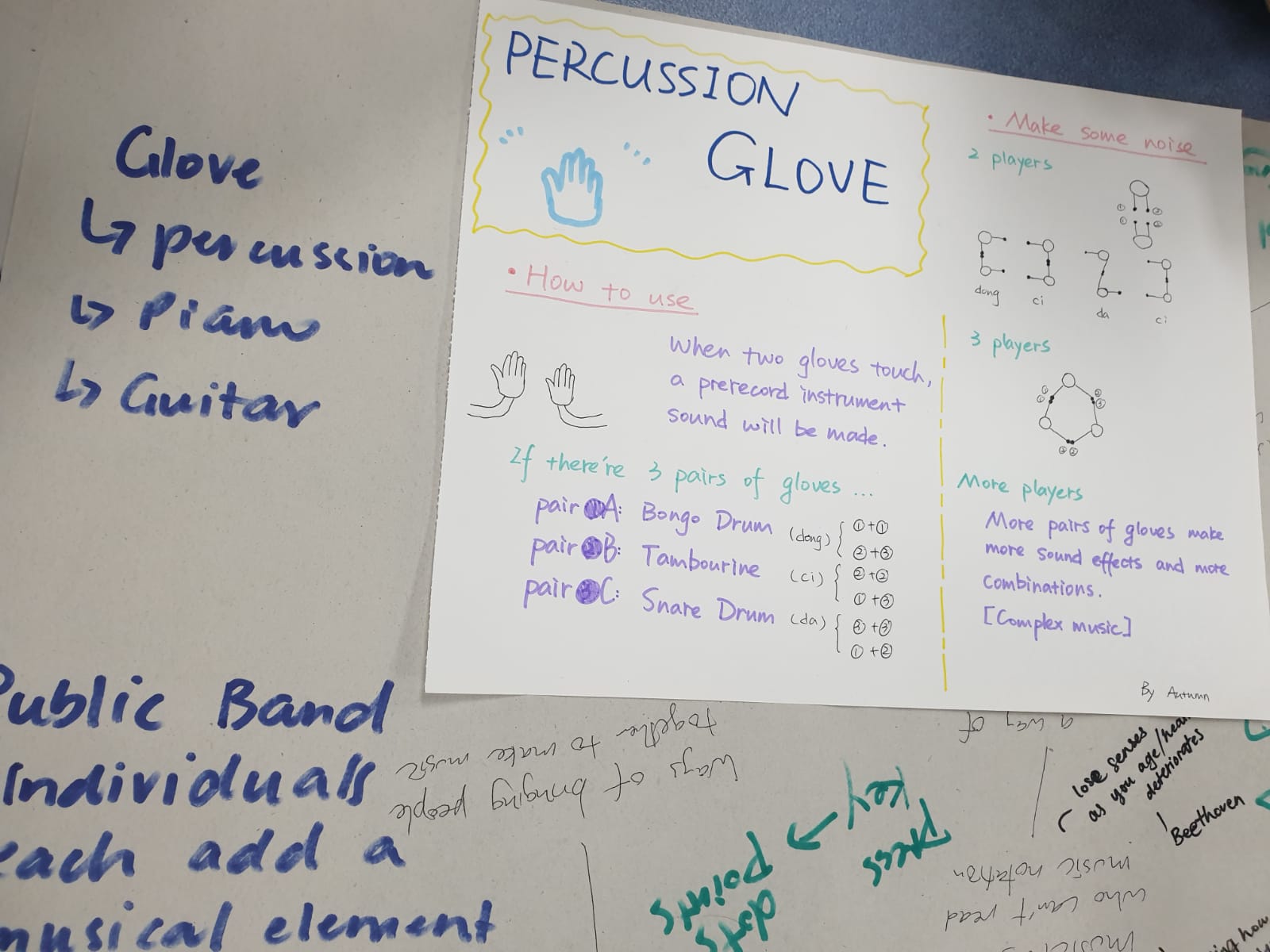 We also came up with a concept - The Sounding Board. this involves a board which can be connected to others, and blocks can be placed in the grid positions on the board, different colours being different instruments, where stacking blocks higher would result in a higher pitch, and more consecutive blocks would be the note playing for a longer time. this would be useful in kids to develop fine motor skills as well as understanding how things work. this could also primarily used in music classes to understand different notes as well as counts in music.

The talk with Bash was extremely informative and inspiring. I was not expecting the exercise and ended up with the word designer. It describes me as I try to find art and beauty in everything, and try to find creative ways to complete a task. I also learnt useful tips on how to plan for employment, such as finding a place where you fit.

We also received our team allocations. I was surprised to have not gotten any of my preferences despite dates matching up, and am quite worried as i struggle with a language barrier with all my teammates. We also have very similar skills and talents, while having different personalities, which will be interesting to overcome in the long run

Below are the potential base ideas we narrowed down our options to, before developing them further to allow for more interactions