Bothersome Design is the project our team is going to focused on in this semester. This is the first stage of the design iteration, and we need to form a concept for this project. So, each member in our team has been asked to form a number of initial ideas so that we are able to choose the most suitable one for this project.

I have done some simple research. Firstly, I asked some of my friends and neighbours few questions such as is there any thing that makes you annoyed but you need to do it every day. Their answers are mostly related to something like they wake up lately, or other daily routines. Also, there is a funny answer which is he’s annoyed to the notifications on his iPhone, the red dots on the top right of an app’s icon. He really does not like those dots, and he has to update those apps in order to make them disappeared.

Based on how I understand this project, I think the design should make people feel ‘annoyed’, and help them to change something. It can be bad things like bad habits, good things, or maybe something they don't have. The experience it created is related to something negative. For example, make them feel uncomfortable; do something they do not want; make them awkward; force them to do something; create an unsafety feeling.

Based on all information above, I come up with some ideas. For example, transfer the red dots on iPhone to every day’s life. Let’s imaging that there are lots of red dots showing on your coffee table, kitchen table, study table, and toilet with notification sound when you wake up. All of these dots are trying to remind you things you need to do today or you haven’t finished yet. That’s really annoyed. The second idea is Tricky Alarm Clock, which is if you cannot wake up at the set time, then the clock will automatically trigger a phone call on your phone, to one of numbers on your contact list, which aims to change habits by creating an awkward feeling to not just users, but also people around users. 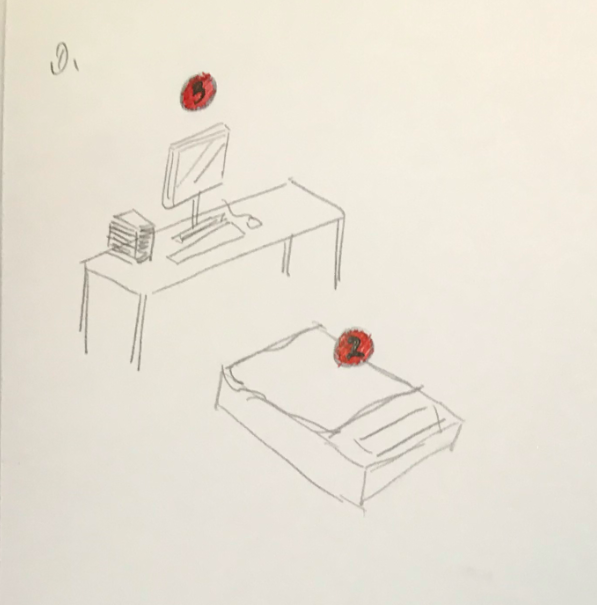 There are two activities in the studio this week. Firstly, a guest was invited to share ideas about how he prepared for the job hunting, and what we need to do before/after graduation. Few things are quite helpful to me. For instance, a small activity that asking us to write down why we are unique. I almost could not write anything on the paper, and I realized I need to enrich myself with extra knowledge or something else. Also, be confident is really important when seeking a job or even in daily life. On the other hand, project theme sharing session was hold in the studio, we share our ideas and also get new insight from other students’ ideas.

During weekend, our group collected all ideas we formed, 12 ideas in total. We hold a simple voting session, which is asking people around us to vote out the best 2 ideas. We collected 12 people’s feedback based on how it is annoyed, playable, and interesting to them. Then, we hold a team meeting on Sunday, and we mainly focus on how to implement the idea based on what we have learned during these years; can it create an annoying feeling to users; does it meaningful to them. Each member shared opinions, and we made a lot adjustments based on the initial idea. The initial idea is a shopping cart with a tiny screen. People scan stuff, and the system will count the current amount of all stuff. When the total amount is higher than the budget, then the cart will stop moving and giving out a noisy sound until a support staff coming to the user. We talked lots about this idea such as how to connect the wheels to the system, and what are things need to be done in order to implement this idea, and how they feel when they use it. We got lots answers, like it involves lots of coding such as scan system, count numbers and displaying numbers on the screen, draw and print out the shopping cart 3D model, wheels design and connection with the system. So, we might not be able to finish it before the deadline. Then, we talked about how to make it more easier without stopping the cart, and we came up with some ideas like a cover on the top, which control whether user can place stuff inside the cart. However, the size of the cart is too large, we think maybe it is easier to implement the idea on shopping basket.

Finally, the ‘Smart Shopping Basket’ is selected based on whether it is playable, involving physical computing, and bothersome. The structure and appearance of the Basket are similar to the Baskets in Coles/Woolworth. The difference is there is a closed cover with a small screen and a sensor on the top: users need to upload the list of stuff they want to buy; then, when a user wants to place something inside the Basket, the user needs to scan it over the sensor. If the stuff is in the list, then a green tick will show on the screen and the cover will be opened and user can place it inside the Basket; if it’s not, then the system will say “this is not the stuff on the list, r u sure you want to buy it?” user needs to answer the system, “yes”, for example, then the system will keep asking questions like “are you really sure?”, “Do you really need it”, which aims to make people uncomfortable/annoyed/awkward. After asking few questions, if the stuff is not related to the stuff on the list, then the system would say “I give you 2 min to think about it”. So, if the user really wants to buy it then he/she needs to turn back again after 2 min. The idea aims to stop people to buy sometime they do not need through repeatedly asking questions to them, and let them rethink about whether it is the stuff they are looking for. 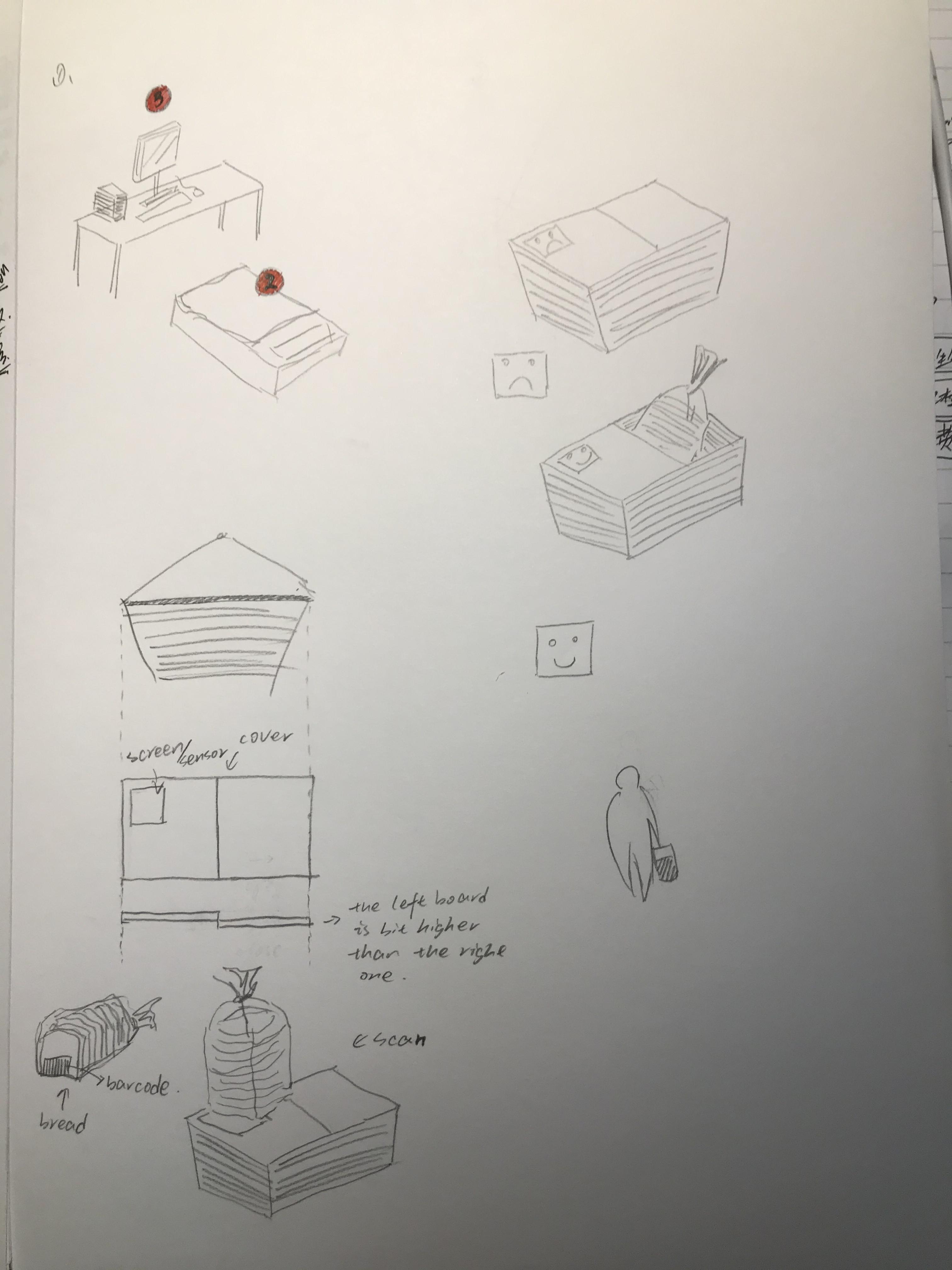 A to-do list is formed in this meeting for the next week: