Wednesday was when teams were allocated, allowing for the opportunity to meet the people we'd be working with for the rest of the semester. I found my teammates

Who Am BATA - and Course Expectations After the Fact

This is the team.

BATA, an acronym of everyones names, and also a brand of shoes. 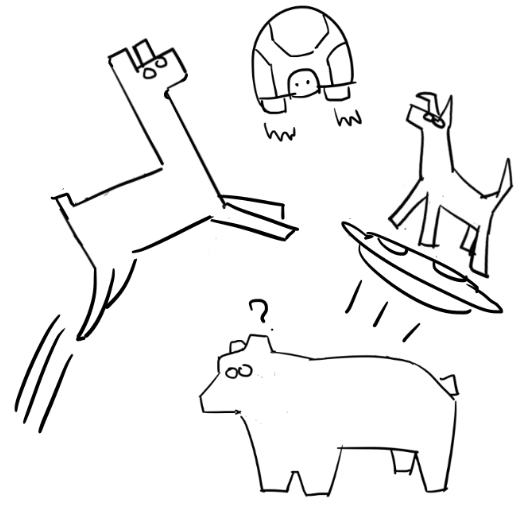 Initially here I'd written about us introducing ourselves, but in hindsight, I realised that keeping that it feels more meaningful to keep that private...

I did learn some interesting things that potentially could affect our projects however, like that one of my teammates enjoys using Ableton, which would be a good opportunity to include music or tunes into some of our interactions, if we choose to, later.

Because we can't completely know what others think, it's sometimes hard to recall that there's a possibility we share more things inb common than might be expected from the surface level. If using ableton is something me and a teammate have in common then, perhaps my conclusion might be that there's other things I have in common with other teammates?

While I'm on friendly terms with dozens of people, I feel like it's unfair to say that I'm friends with them, so perhaps 3850 is more of an opportunity to make new connections, and gain an insight into the world from angles I wouldn't have expected.

Because it's placed so far into the syllabus, there's a sense of... "this is the end" of being here, like a final hurrah before entering the death spiral of the working world - so I'd thought there'd be limited opportunties to engage with people, as everyone grinds away at getting something done before a step into industry..., so the realisation that these opportunities exist leaves me unsure of what happens next

Before the start of any enterprise, there's expectations to meet. The team discussed both what's considered the "normal" and "safe" situations, things where changes are alright and don't have much impact... and what would be considered "critical" or "urgent", more serious topics that would need to be put to a vote. The conversation from there shifted to the methods to deal with issues.

Timelines, and when people were free, as well as expectations for tardiness were discussed, but we also went over combinations of teammates whose work would overlap with each other at different times. For example, it wasn't possible for every teammate to be working together every day of the week... but we could find a way for us to reliably have combinations of two or three people available to work on the subject outside class hours.

Further, we also had additional meeting times set up, a time of week after studios will have been completed where everyone will have had a chance to grab a short break, and be able to come back to discuss further steps. This way once things get hectic, downtime between our studios and the next time a teammate could work on things wouldnt enter the realm of several days.

Reflecting on an earlier post, our topic, sassy tech, could be said to be technology that responds to a users actions in a cheeky way... so we started out by brainstorming some examples before a more substantive discussion scheduled to be held on the weekend.

These was a group effort however... so it doesn't feel too fair to discuss the ideas as a whole here, that's almost like taking credit for our collective work...

Instead, I'll just detail some of my interpretation of what we did. 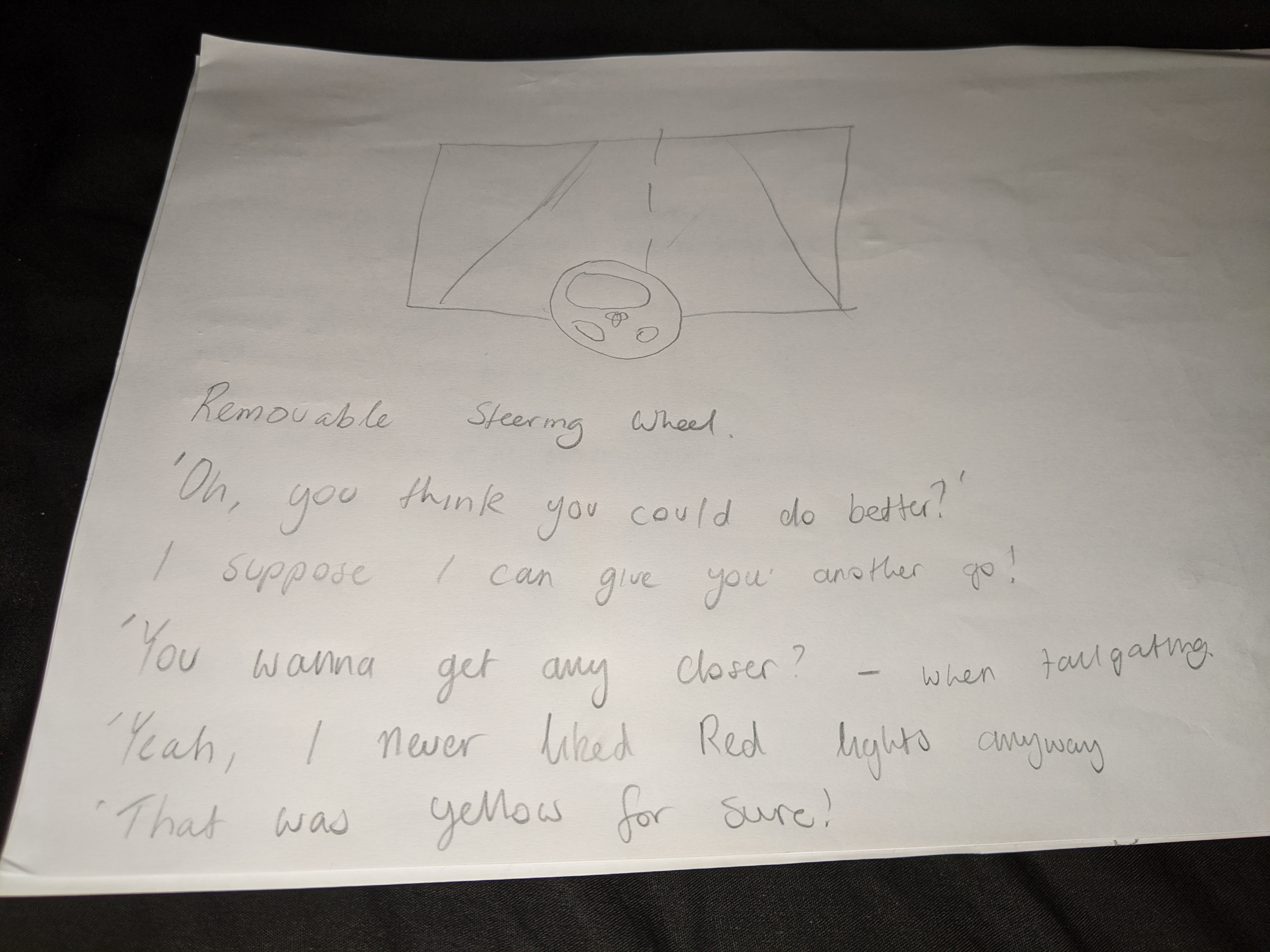 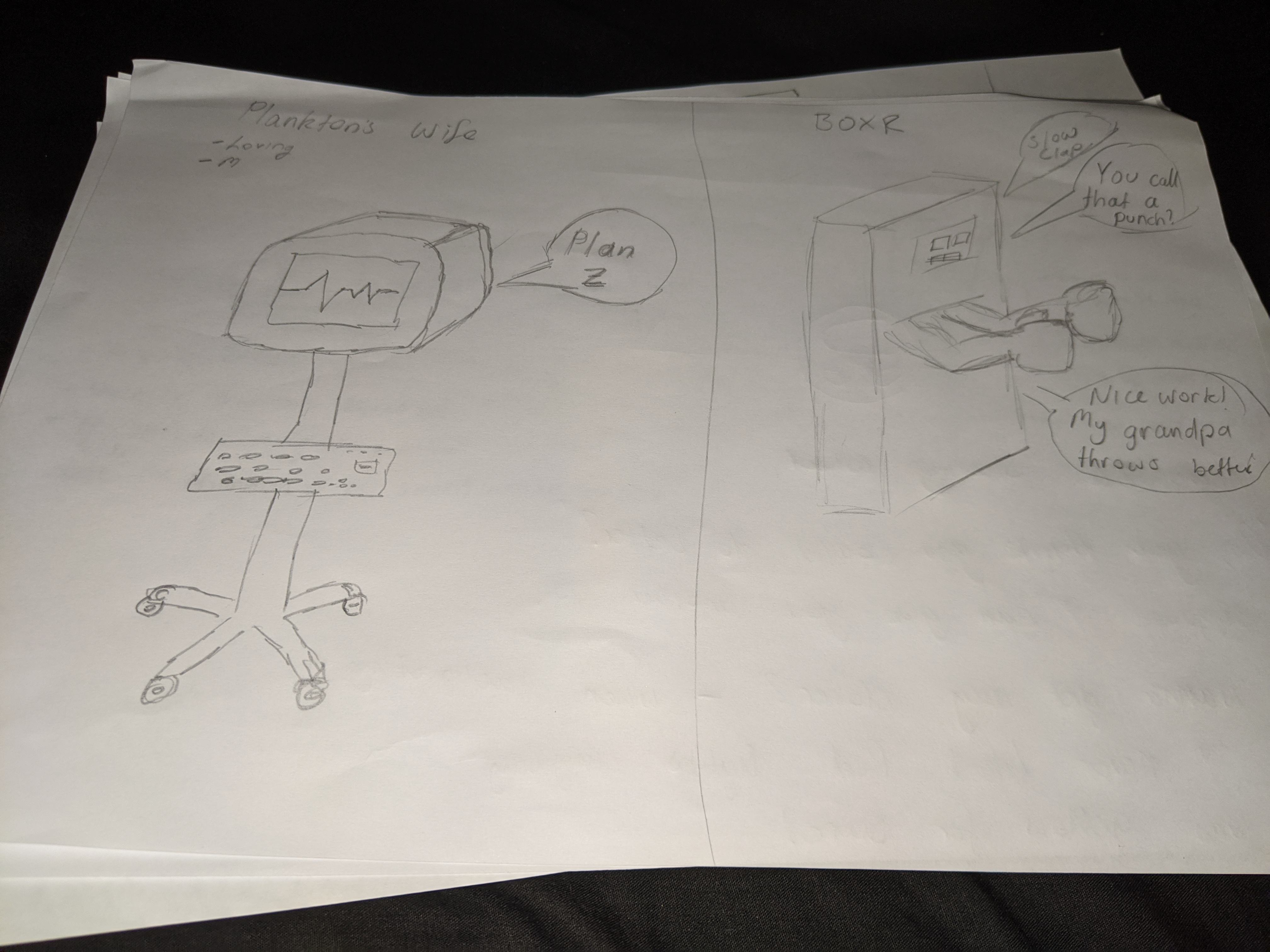 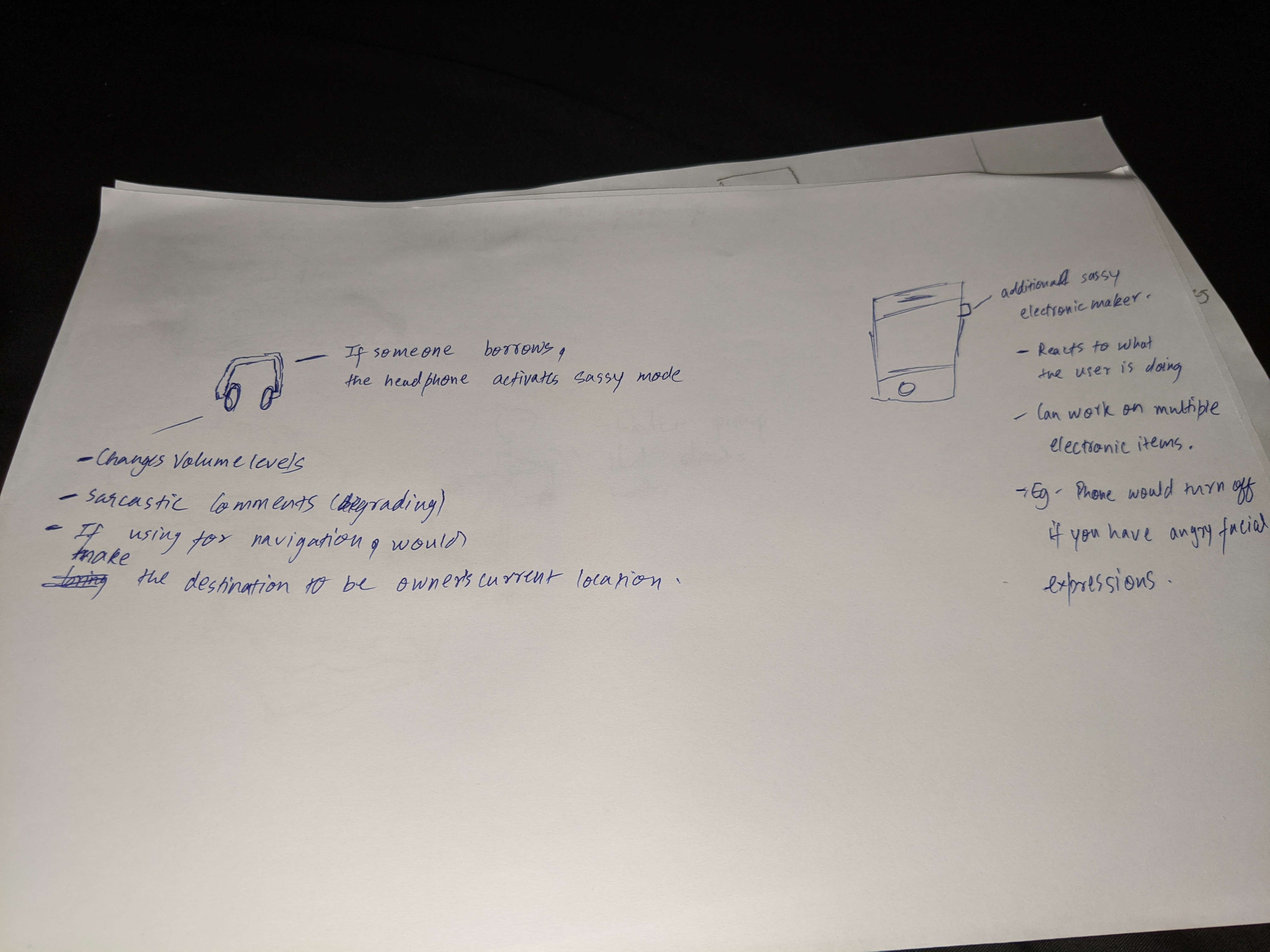 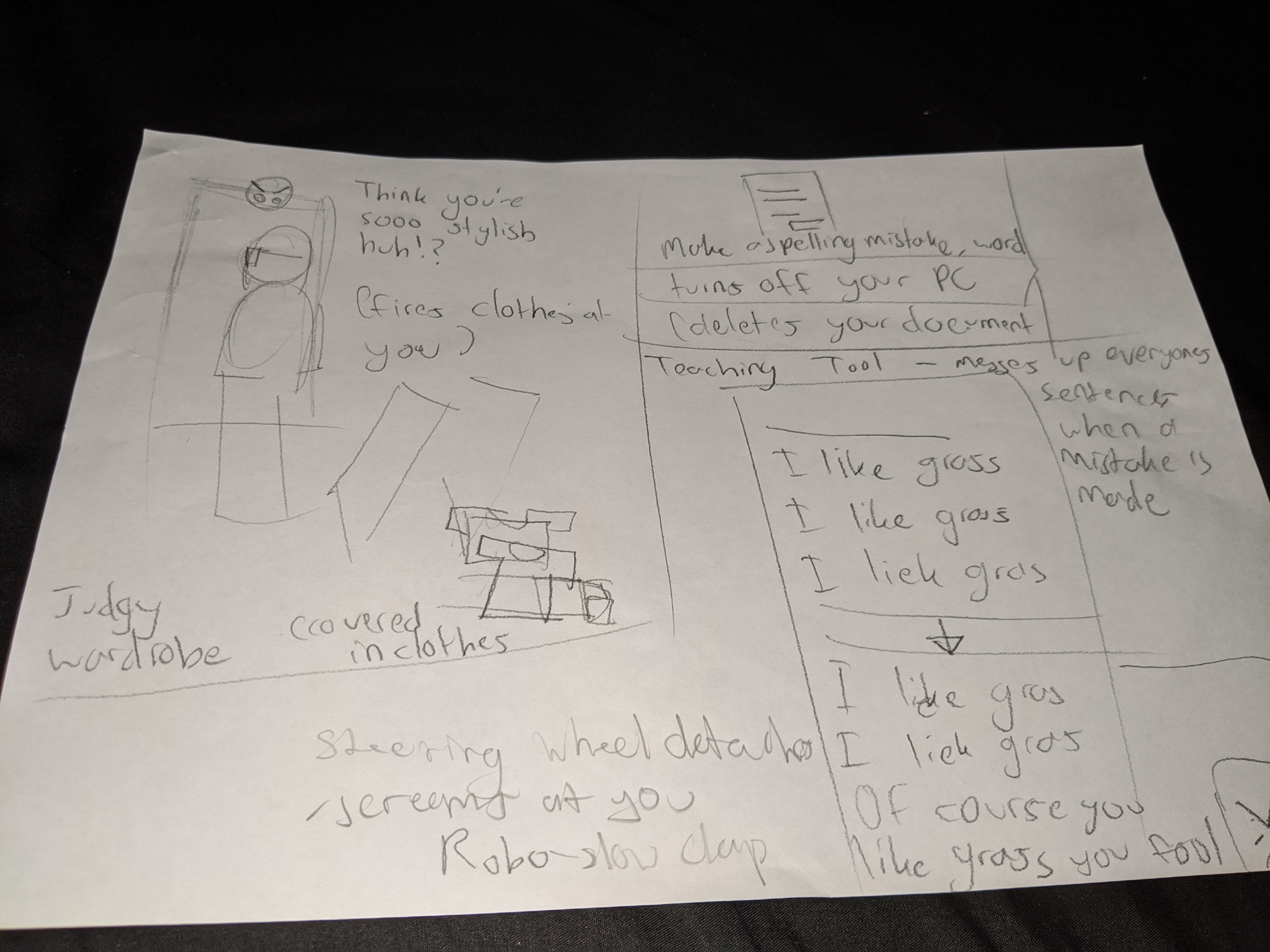 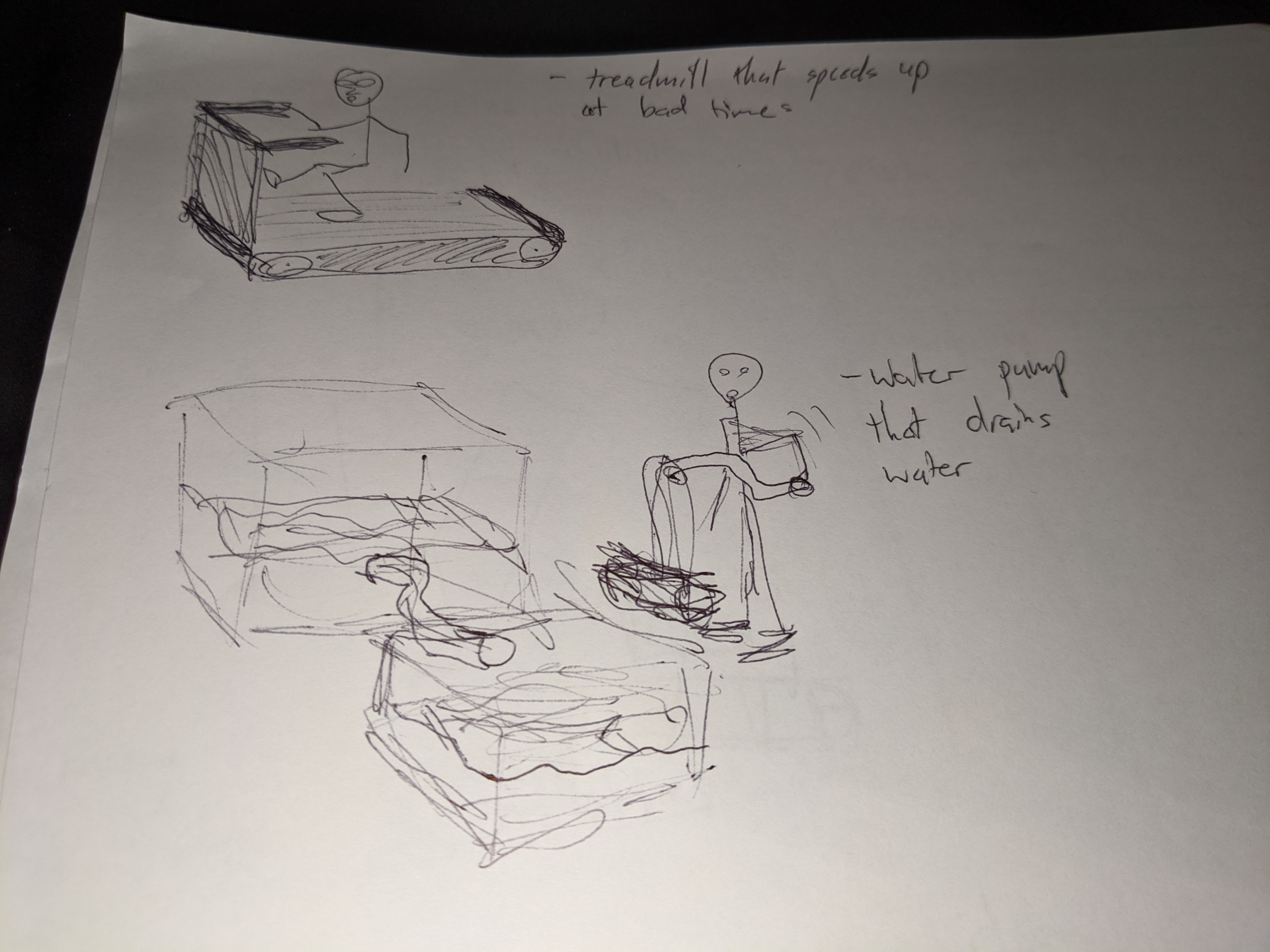 Essentially, the early interpretations of our potential work to address the theme, was that we'd be creating a physical device or ... creature (?) that would respond in an unexpected, cheeky, or otherwise almost malicious way (barring actually harming users).

The intent - surprise, but also potentially frustrate whoever was interacting with the device or creature (or experience), with an unexpected response. For example, a text processor or blackboard, where one person misspelling a word in a paragraph changes the occurence of every word in the document or on the board to be the misspelling, sorta, making fun of the error.

Sarcasm and cynicism played a part to an extent, like a boxing robot that would belittle your punching skills, to act as a sparring partner potentially. Essentially, the interaction doesn't have to be a fun time... there's potentially a chance to add negative reinforcement into it...

Steven also brought up how sass doesn't always have to be negative... which reminded me of how there's always the idea of playful sass - for example, pretending that someone doesn't know how to read when they're about to look at an article - then having a laugh together about it.

Worth revisiting later, but I think for now... I'll look into some examples of sassy tech and serendipitous reactions from academic sources.