In the Wednesday session, we had a call in from a former UQ student based in London. I was surprised that his #1 tip was to be friends with the recruiter, not to work on your CV or portfolio, although it makes sense. I have previously landed a job from a recruiter and I can see how that is a good tool. The exercise he was running was very interesting, I ended up with the word invested. I feel like this represents me in a good way because I never half do something, I am always curious and well, invested. I will now try to use that word further in my job searching process.

In the Wednesday session also got our teams, which was no huge surprise for me. I have worked with all team members before, which can be for both the good and the worse. Good because I know these team members are motivated, well communicated and ambitious, for the worse simply because it will be the same input as before, no new perspectives. But I think we will be able to ideate well and still be able to come up with creative ideas.

We met after class and ideated, with Marie joining us through Discord. We spent the time getting to know the topic, emotional intelligence. I shared what the discussion was about when I was at the table and we used the butchers paper and posters to generate more ideas. The way we did it was to come up with both input (externally), input (internally) and output and tried to mix and match. We planned for a meeting on Friday and agreed that we all had to bring 2 ideas to the table to that meeting.

For the individual ideation (to come up with 2 ideas as a base for the Friday meeting), I found myself doing the same things as we did in the meeting, coming up with the same or similar ideas. I therefore asked my roomie, presented the task and mentioned the different ideas I had. He happened to know about a brain activity tracking headset and helped me find it! It would be very very interesting to actually track actual brain activity to somehow find out about emotions or how someone is feeling, and use this data to display some output. We saw that the headset itself was 100$, which is completely doable. What might be the challenge was the software to control the helmet, which might be a lot more expensive. Below is some of my ideation process: 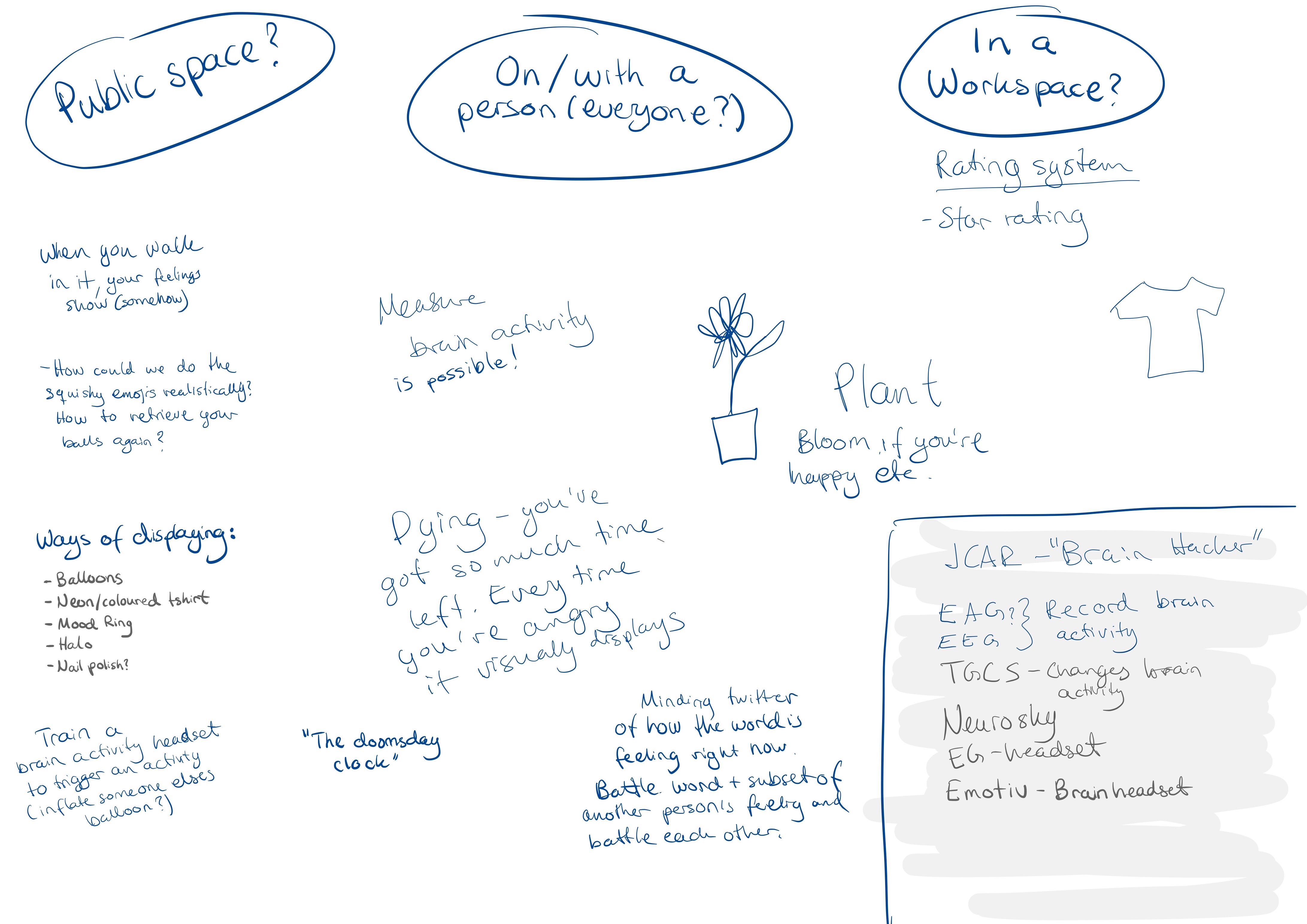 We ended up ideating on how it is actually possible to train a headset to trigger a certain activity and how this could be used to for example be picked up by another headset. An idea we had earlier was to somehow display how others feel about you (Throw emoji balls at someone), and we tried imagining how this could be done with brain activity headsets instead. We also explored how we could use some sort of tracking software, that tracks the tone/emotions of the things you are typing (like Grammarly), and for example track twitter, and display somewhere how the world is feeling at the moment.

I had a lot of fun ideating this topic, as a lot can be done. It is, however, easier to come up with "blue sky" ideas rather than realistic ideas. These were the ideas I ended up suggesting for the group: 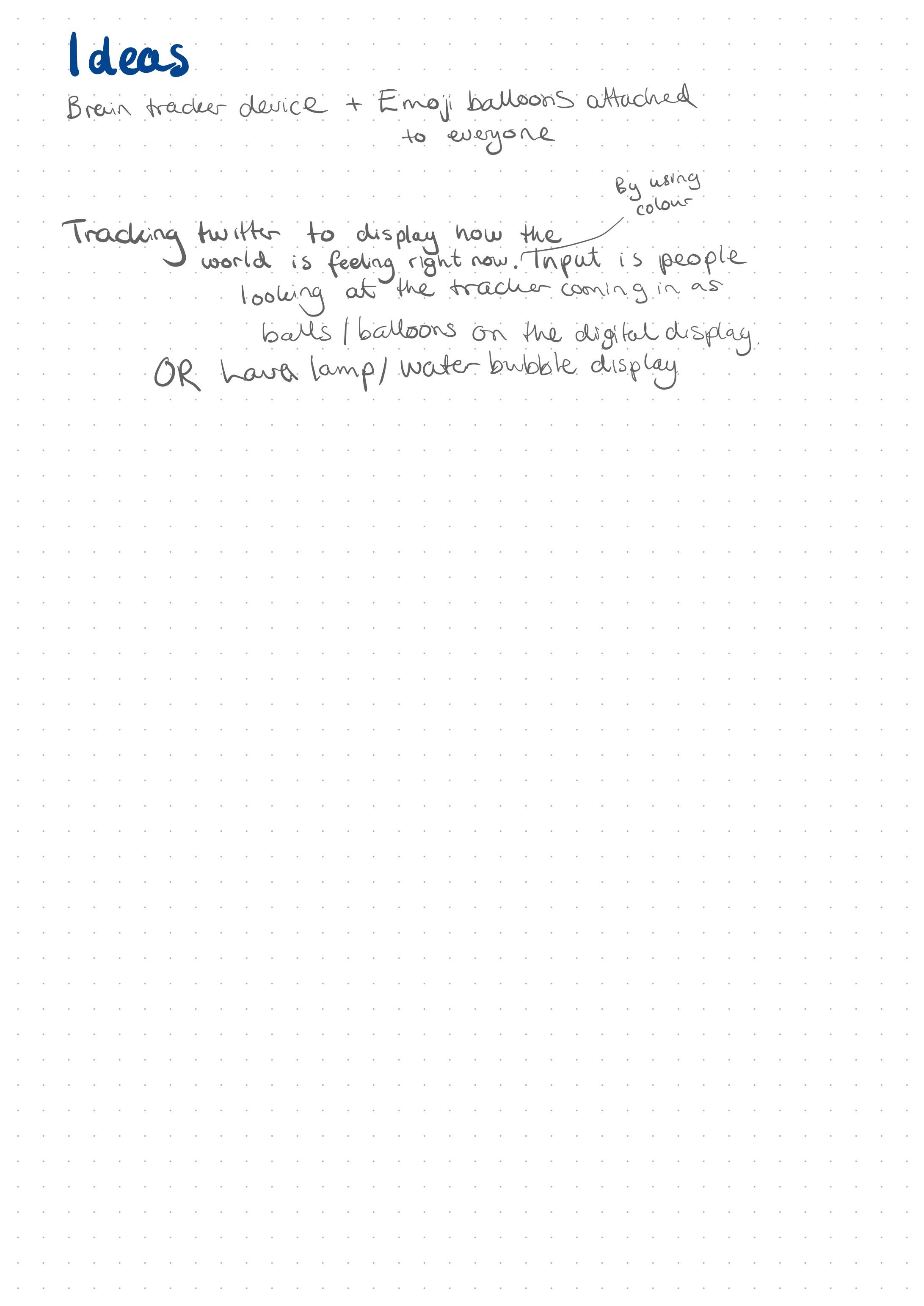 On the Friday meeting, we each presented our ideas for each other. I think we handled it well in terms of giving each idea enough attention and had a small ideation for each idea. The process was all in all a group discussion where we built on each other ideas and that way came up with new ones. I tried asking questions that I knew we couldn't always answer, like "Where would that be?" or "How can we make this fit into the everyday life", or even playing with ideas like "What if we changed this to a different output". This worked to refine ideas and play around with concepts. We ended up setting up a lot of different outputs, inputs and variants of the final idea. In the future, I would love to see how we can make this idea more purposeful, but for now, it is a sufficient idea.