For the first part of the contact, we got to hear from a UX designer living in London named Bash. He was insightful about what companies might want and being true to yourself. I haven’t stopped to think about what kind of company I would like to work at or what type of environment I would prefer as I have been too focused on wanting to apply for as many jobs as possible. This made me realise that it would be beneficial to me if I researched more into the companies I am applying for. It was also good of Bash not to sugar-coat the fact that finding a job will not be easy, as many people are applying for the same positions; this puts things into perspective and allows us to be prepared to not always get the position. Bash also talked about how to improve your chances by having good relationships with recruiters and focusing on what makes you unique. Bash got us to do an exercise to find out what makes us unique. This exercise was very difficult for me as I found it hard to think of something that makes me unique and would help with getting a job. However, I was able to come up with three words: UX, positive and Laugh. The word I chose was laugh because I enjoy laughing with other people, such as family, friends and co-workers. Sometimes it is nice just to laugh, though this doesn’t mean that work shouldn’t be taken seriously. Instead, it is about creating a positive environment where you can enjoy each other’s company.

Last part of the contact session was where we finally found out our teams and the theme we are meant to be focusing on. I was surprised about getting musical things as it was not one of my preferences; however, it would be interesting to see what ideas our team comes up with. I was a little concerned as I am not musically gifted; however, I have realised that this could be useful especially if we go down the path of allowing people who don’t know how to play an instrument, to be able to create music. This would be exciting to explore as I would love a product that enabled me to play certain music pieces. As a team, we discussed potential ideas and constraints for the concept. These included having ideas that either manipulated the natural sound the object made, having different objects represent different instruments or having different sounds/notes depending on how the user interacts with the object. One constraint that we came up with is to use only one everyday object. The target audience is aimed at people who are not musical but want to be able to play music. 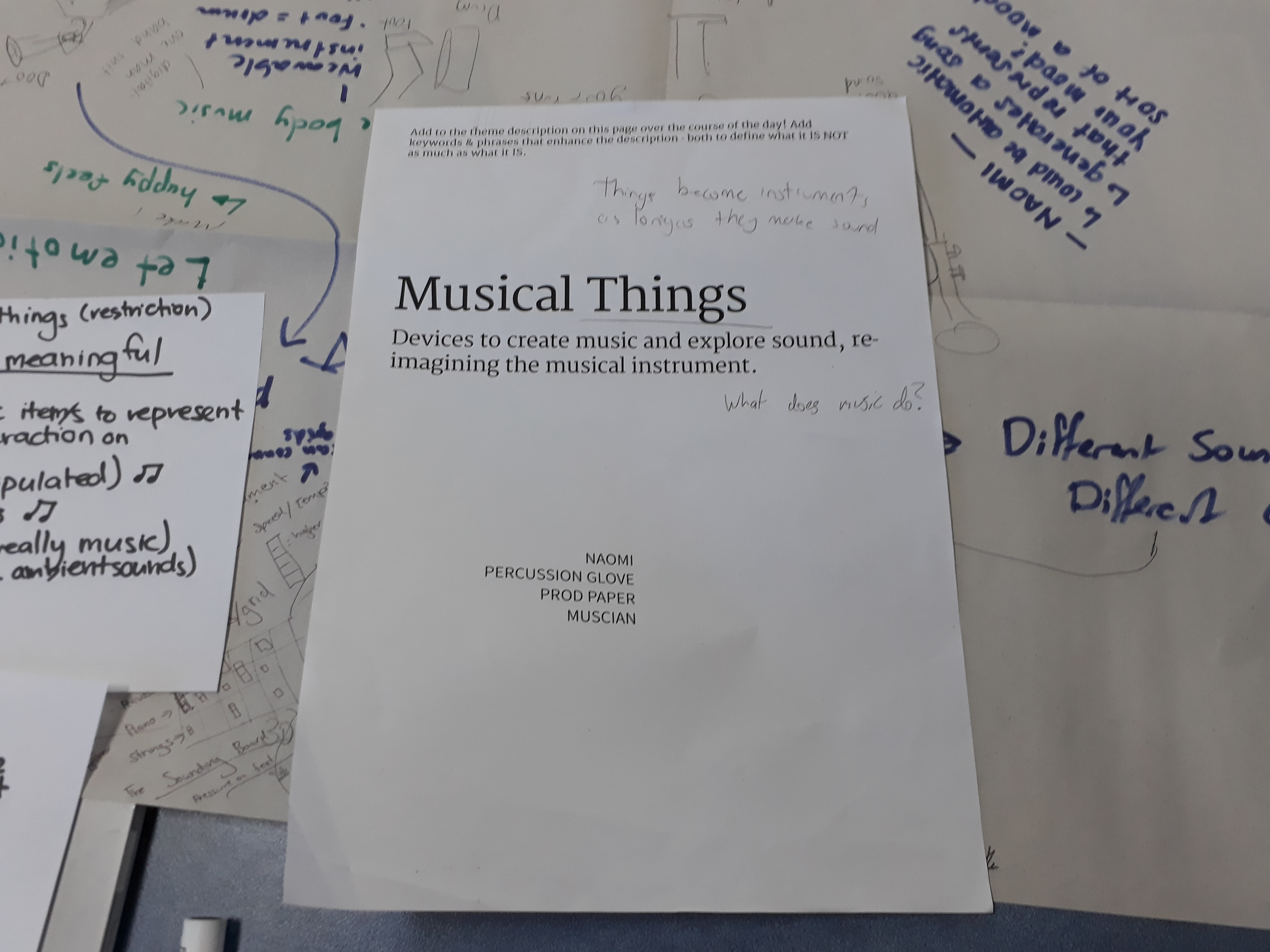 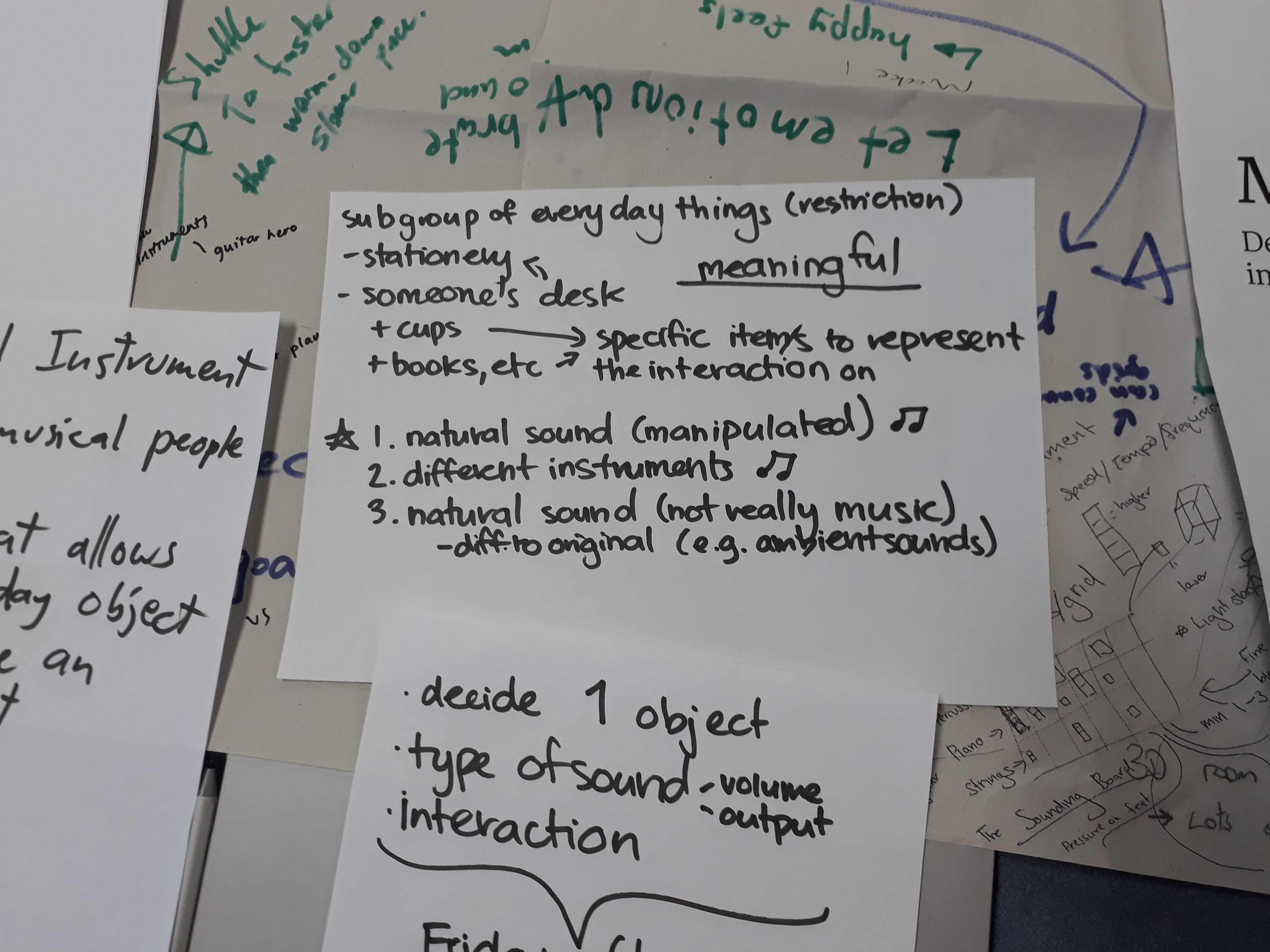 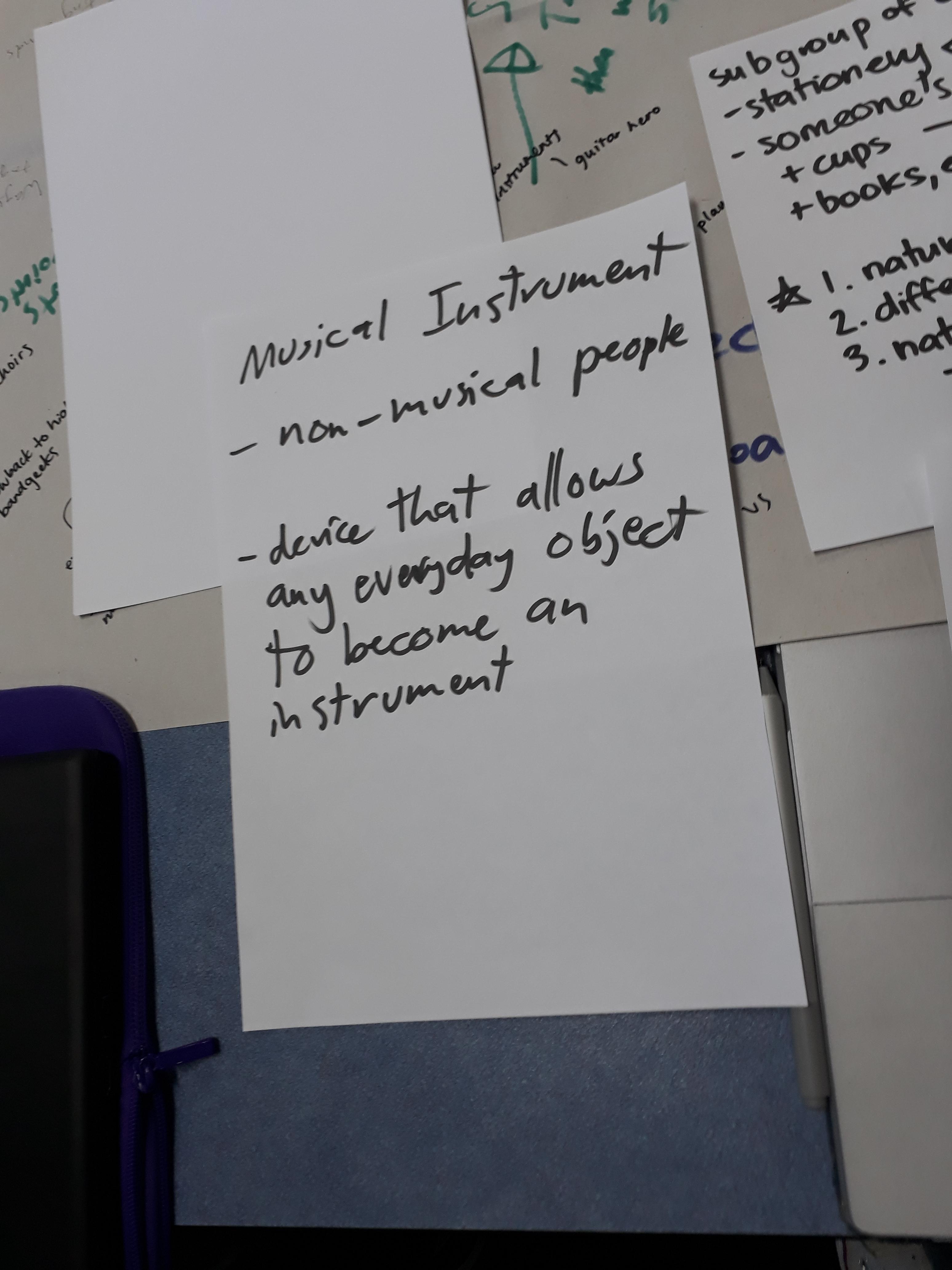 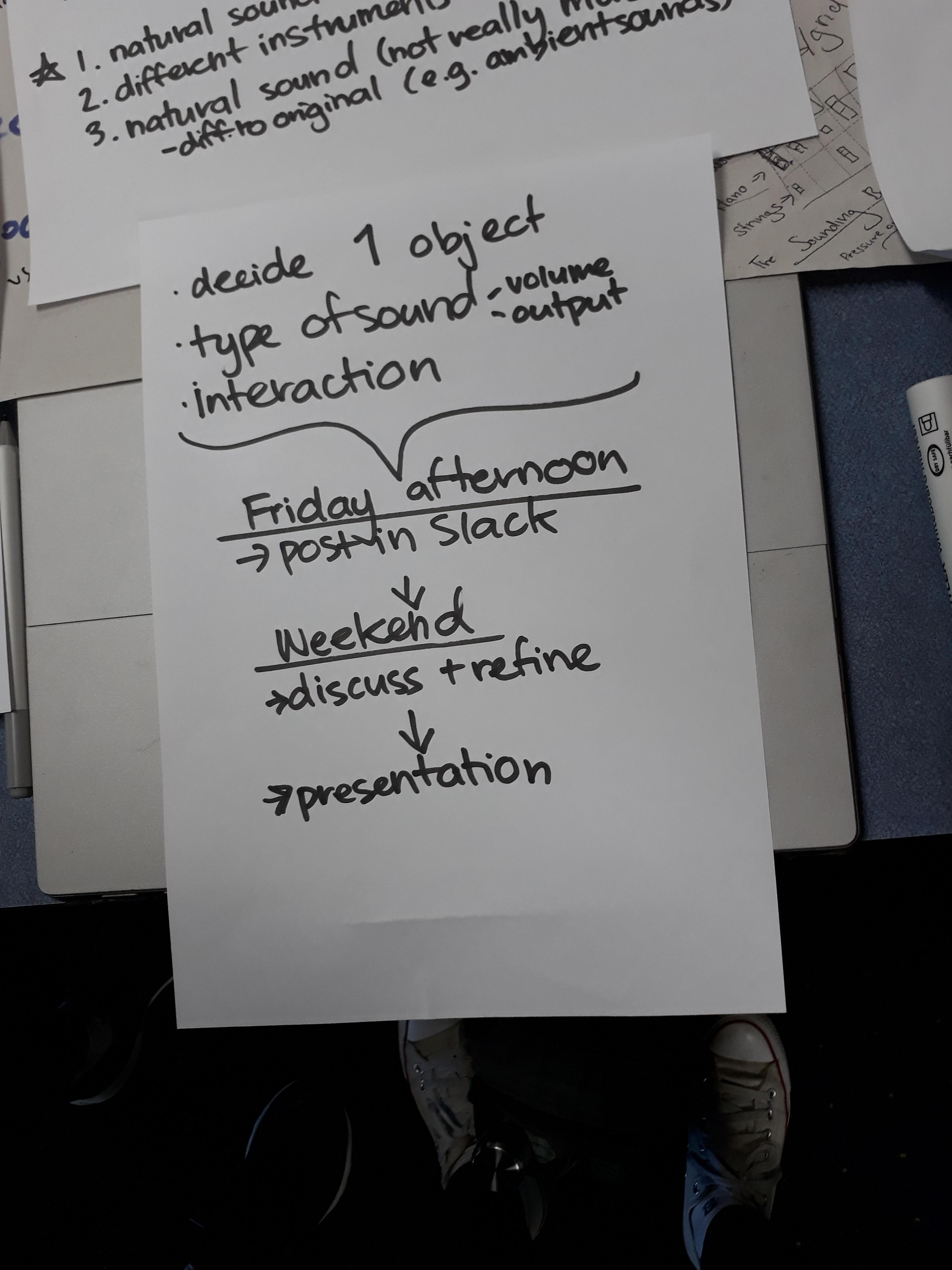 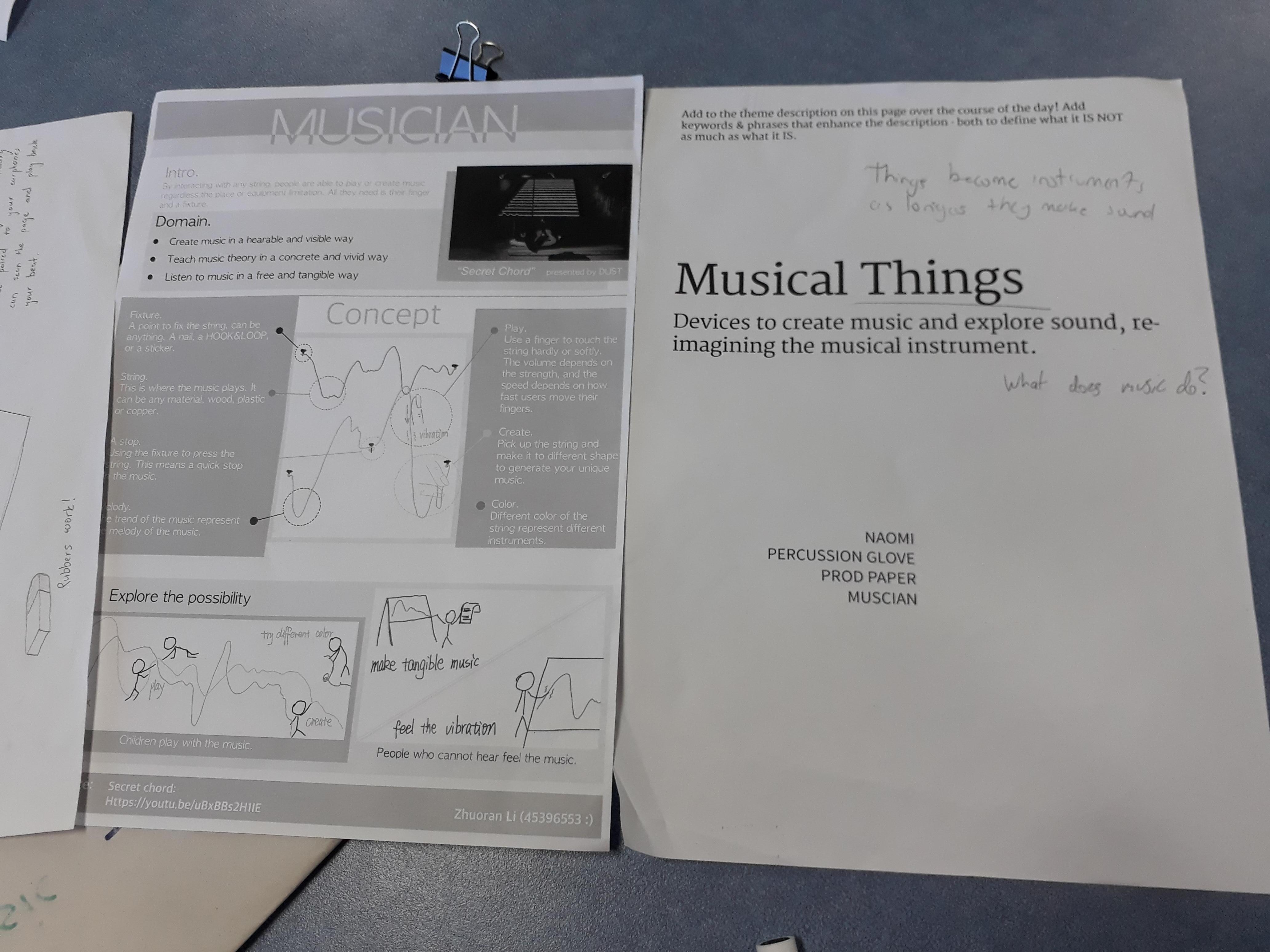 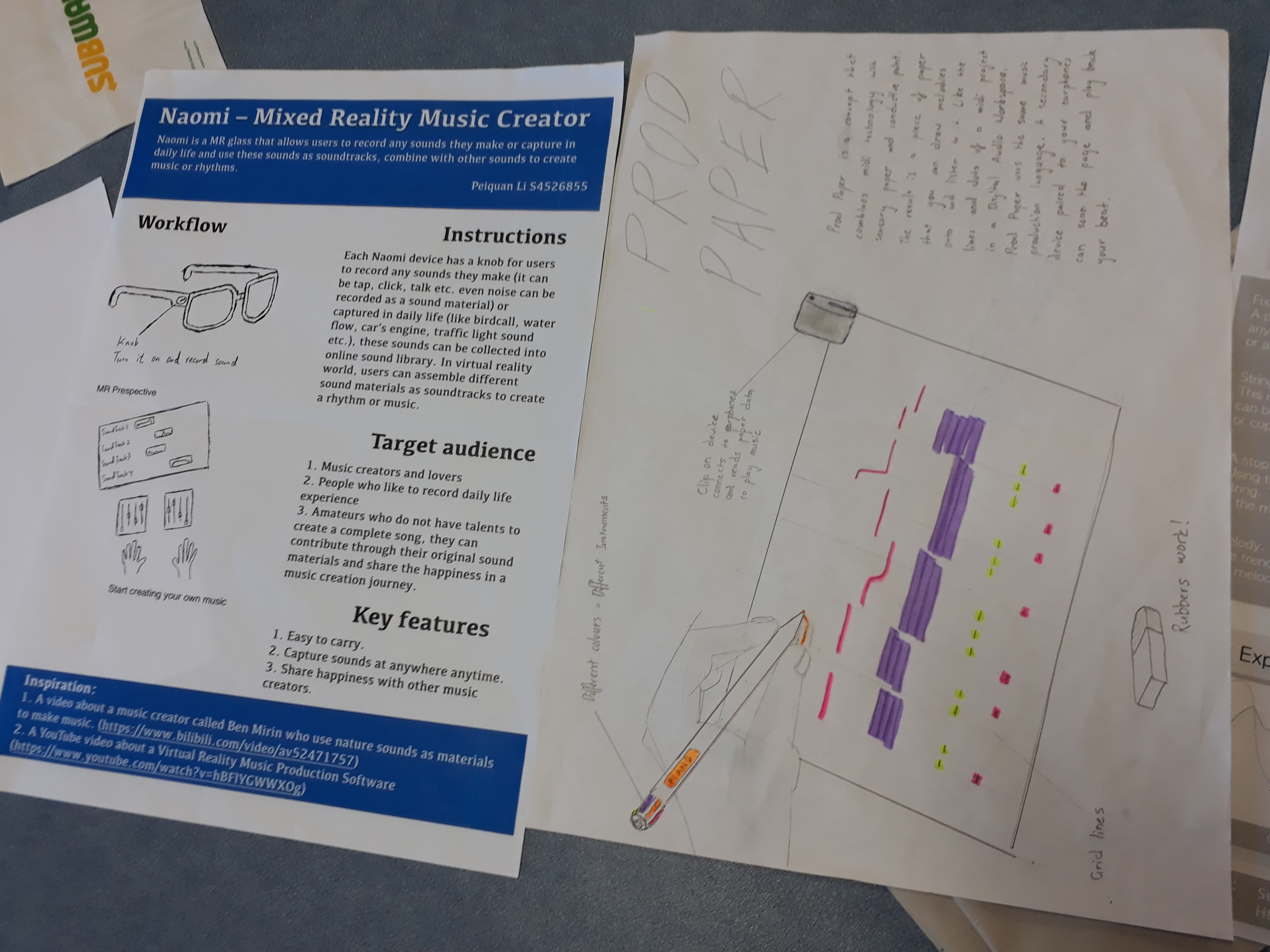 Currently, we as a team are focusing on completing the team agreement and coming up with a concept for the pitch. The plan was to have everyone come up with a potential idea, ways to interact and how to create music or sound. The idea that I have come up with is explained below.

Bin Interaction: Bins are something that is all around us every day. Different materials used for bins make differing sounds. Ways the person could interact with the bin is by hitting it to make a sound recording. Then the user could manipulate the bin by stroking to change the pitch and the speed of the tapping could change the tempo. Problem with this is the hygiene as many people will not be comfortable interacting with the bin; therefore, it will probably be an office bin that is in the study or bedroom. Another issue is that there will be limitations on the different sounds they could create, and it would not be stimulating enough to use every day.

Kitchen Utensils: Most people use some sort of kitchen utensil every day. For me, it is mostly a metal fork. Two forks could be used to tap each other and use the top parts to scrap one another. Another way to interact with the objects is to use one fork to hit various parts of the other fork as it creates different sounds. These different sounds could produce different music notes and when the differing interactions are done consecutively and in a certain amount of time, it will be able to create music. One fork could also be used instead. The fork would have to be clean to interact with it as this could be problematic, especially if kids are interacting with this object.

Another way would be to have a fork, knife and spoon each represent a different instrument.