Tuesday in week 3 we had a World Café in class. This was a session where I got to explore all the different ideas and think of how they could be developed with different contexts, different target groups and refining ideas, going from dreamy and futuristic ideas to how we could actually implement it in the real world.

We had a total of 8 rounds with three different topics. I forgot to take photos of all the tables I was at, and it is, therefore, difficult to remember all of the specific topics. I will, however, elaborate on the ones I chose, and the ones I remember to be particularly interesting OR difficult.

With this topic, we explored how emotions can be expressed or communicated outwards. We explored what form an emotion could be expressed though, like colour, temperature, size of something, sounds/music, etc. We noted the fact that emotions are very very complex and hard to for example display a device as red because you are angry because you would never feel just anger. We explored how we could show different colour patterns or gradients to visualise different emotions or how you are feeling. That got us further to the controversial thought of what if everyone lights up (halo, clothing, etc) displaying their emotions and feelings? There would be a lot of privacy and accuracy concerns with that idea, but it would be an interesting concept to explore because we are in a world filled with mental health issues and different range of emotions. It would be interesting to see what would happen when you couldn't hide what you were feeling. Another aspect was to display the emotions of a whole building together, and cities would light up in vibrant colours.

I was at this table in round 2, so I never got to explore how this could be put to life, but had a look at the table after the last round and saw they were more focused on the "expressing emotion" part, where you throw things or do physical things to express how you are feeling. This was my first choice of topic, as I thought it would be interesting to explore further. 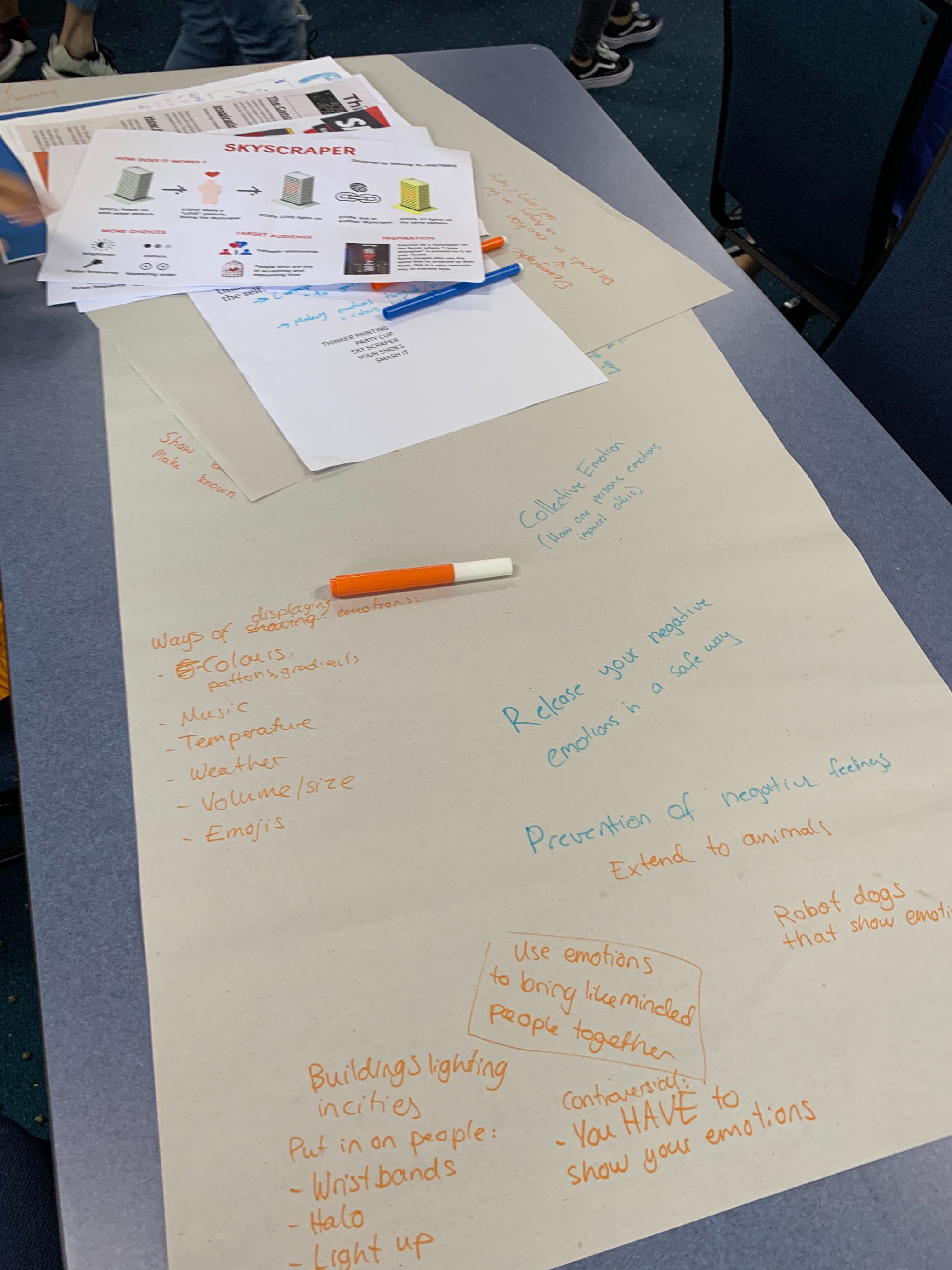 This is my second choice of topic. I was at this table in round 3, where we got to explore how we could make the ideas come to life. Previously it had been explored what kind of situations you'd want to change, and I tried discussing whether we'd want to make something controversial that didn't necessarily want to change from a bad habit, but just change in general. We couldn't think of many ideas for that except from making friends on the bus, but that would be an interesting area to explore. The most recent previous group put together ideas for 1) Procrastinating, 2) Getting out of bed and 3) Compulsive Swearers, so we tried finding something in that space that could be realised into the real world. It was slightly difficult for those ideas as most were already invented in some way. We looked at a previous concept of "change" being "avoid saying Ahh/Uhmm when speaking publicly". We thought this could be a fun concept to play around with, and ended with an idea in the form of a light that lights up every time someone says "uhm" in a public speaking setting. The light would be visible for everyone including the speaker, to constantly remind them. This might throw them off, but it sure would be uncomfortable and encourage change. 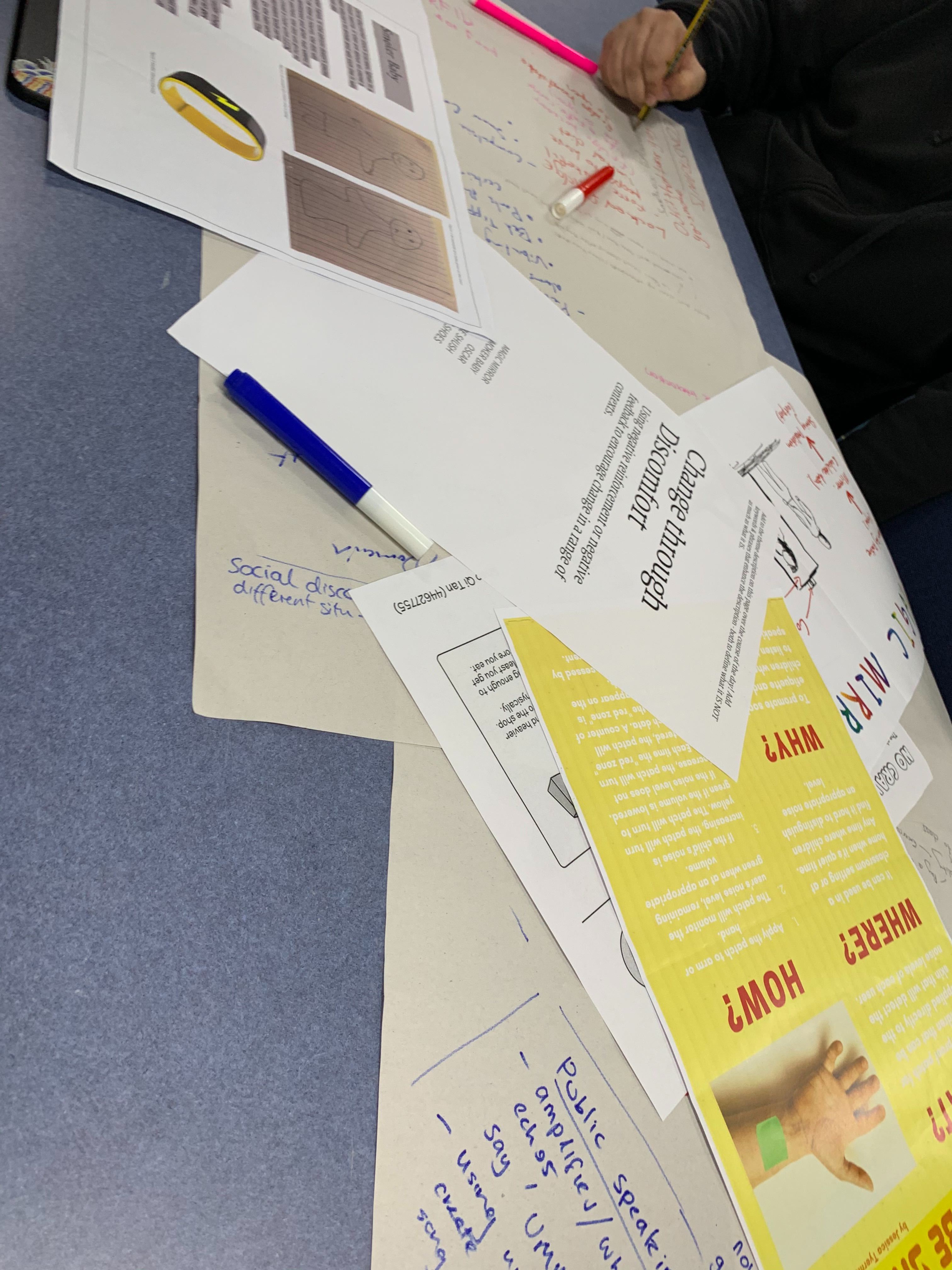 This was the very first table I was at and also my third choice. We explored how this didn't have to mean reaching a physical destination, it could also be a mental state or a goal to reach. Many of the ideas provided was considering exercising and turning it into a game, but some were about travelling and reaching a destination. We explored different ways of getting to a destination, by for example shoes that vibrate to tell you which way you are going. We explored different ways of notifications such as a gradual vibration notification or pressure wristbands.

I wanted to mention this topic because I found it very difficult to work with. I was there for the last round where we were supposed to come up with realisable concepts. The ideas that were there before were building on one idea (control weather through meditation and breathing), but we found this difficult to realise into something realistic. We tried twisting our brains into sensations with technology that we have in our daily life. Buttons were mentioned as a physical sensation that is removed with the mouse and touch world, so pressing physical buttons would be very interesting, but not particularly possible. Another concept we came up with by the end was to make the shapes of the letters you are going to type, either by using your full body or two or one hand sign language. This would be realisable because we do have technology that can recognise shapes through a camera, but we struggled to find any good purpose for this.

I thought this activity, the World Café, was very encouraging and inspiring. However, I thought it was a bit difficult to "land" in round 3. So far we've gone above and beyond with our ideas, not thinking about implementations, but now we had a short amount of time to make it realistic. It was difficult to not just think of new ideas but to think with a realistic perspective, and I experienced that we weren't able to come up with any very good ideas.

In addition, the hosts weren't always good at accommodating for new people, so I found it hard to put my head into a new topic. A final challenge I think this challenge faced was people that didn't want to participate. It let a lot of the communication to only a few people, which is a shame because more minds means more ideas.