In this week, the domain we are going to focus on is decided, which is helping people to reduce sedentary behaviour. Based on the information I found, most of us have this behaviour. For example, sitting for 3 hours while playing computer games or, sitting to study or work at a desk for long time. on average, it occupies around 9 hours per day for adults, and it could be longer for some occupations such as office workers and call centre workers who spent around 11 hours/day in sedentary behaviour. long-time sitting or lying can increase the risk of obesity, cardiovascular disease, cancers, and poor mental health. So, it is necessary to change the sedentary behaviour.

An initial team concept was formed. “The nagging cushion”, it’s similar in appearance to usual cushion but the main purpose of this cushion is to remind people to stand or walk after they have seated for long periods, which aims to reduce the sedentary behaviour. Specifically, the cushion starts to count the time after the user sat down, and the semicircular particles on its upper surface will be raised and move after sat for one hour, which aims to create an uncomfortable feeling to the user so he is not able to keep sitting on the chair, and the state will turn back to normal in five minutes.

In addition, it has a playful and annoying feature: when a user has seated for long time such as 2 hours or, ignore the reminder, the voice system inside the cushion will talk to the user such as ‘You have seated on my face for two hours! That hurts!’, ‘Do not throw me away just because I am annoying’, and ‘Do you know how heavy you are?’. They all aim to divert user’s attention and remind them they have been working for long time so it is the time to take a break for a while. In order to make sure user is standing or walking, user is required to carry the cushion. The cushion will then record the number of steps or the change of the height. If the system did not detect anything, then it would say something like ‘Hey, come on, just few steps’ or ‘I knew you gonna be lazy again’. On the other hand, this system can also read the current time and user’s daily plan set on phone. So, it will remind the user the upcoming plans, as well as daily routine like lunchtime. 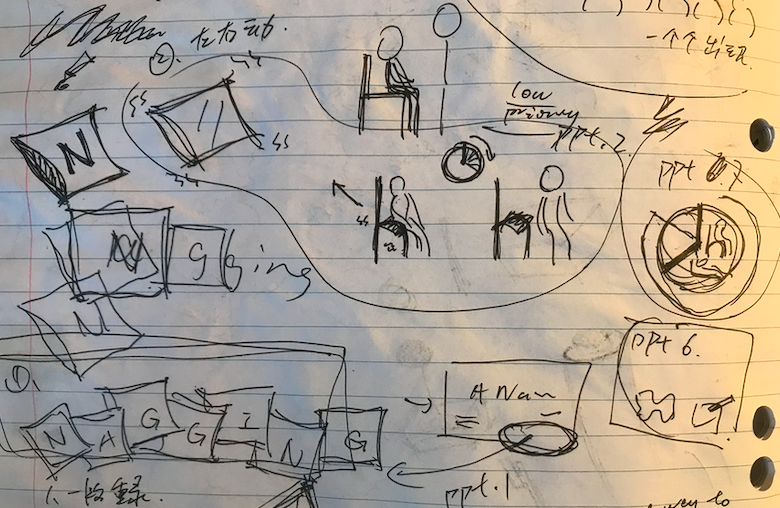 Obviously, the target audience are people who need to sit for long periods for study or work. Such as students and office workers. Also, it is suitable for people who often sit and play video games for long time. In addition, one of the features they have is they dont take regular breaks to stand up or walk around after long-time sitting, maybe it’s because they are too busy so they lose track of time or, they just don't care about it. and now they want change it.

In addition, I considered how to show the concept to all other students properly in the video. I think drawing and animation are the best ways to show it because in the current stage, no prototype has not been created yet. So, the most suitable way to show my concept is to convert the long text into clear, simple, and obvious drawings and animation. In this case, animation was selected because the show case could be more fluent and it is much more easily to highlight what I want to bring to users. Also, it is something I have never tried before, it is kind of challenge for me. Firstly, I created a basic outline and framework for the animation. 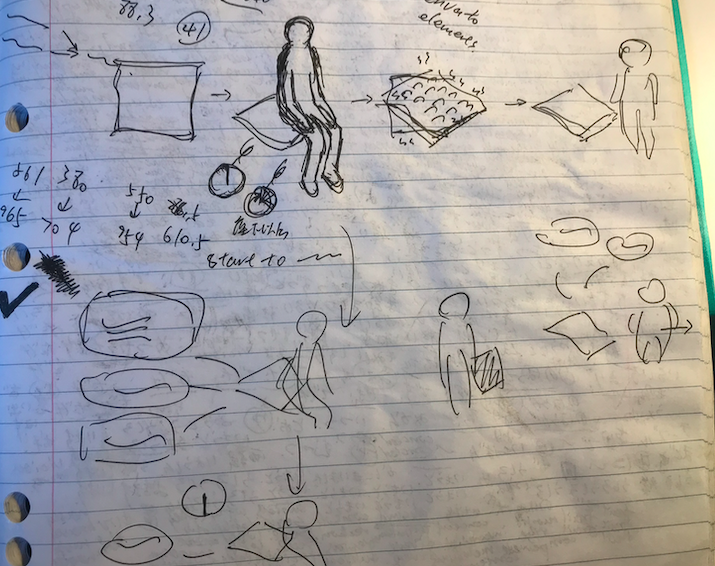 Then, through using the drawing mobile application, I draw all features I need on it. 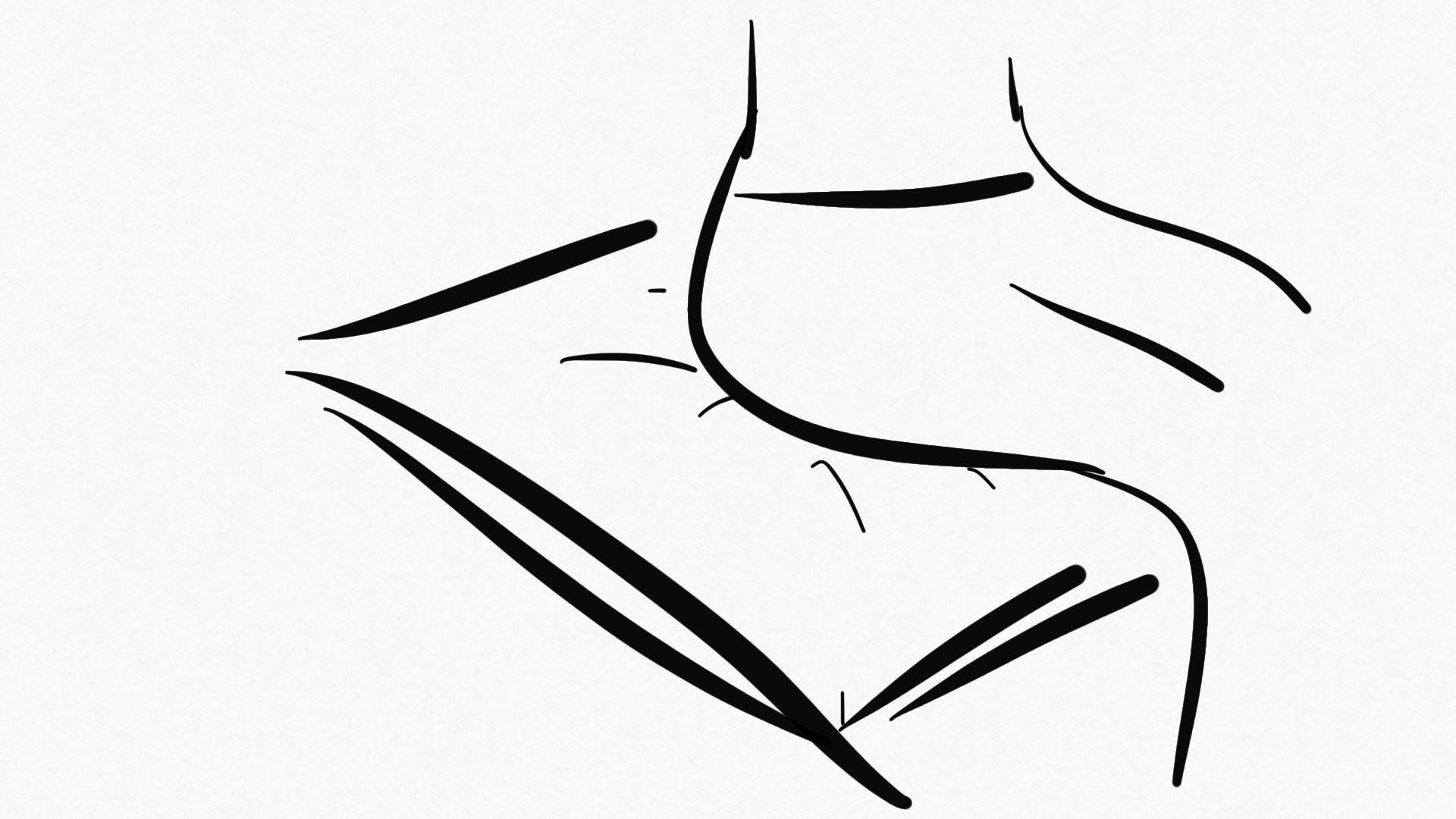 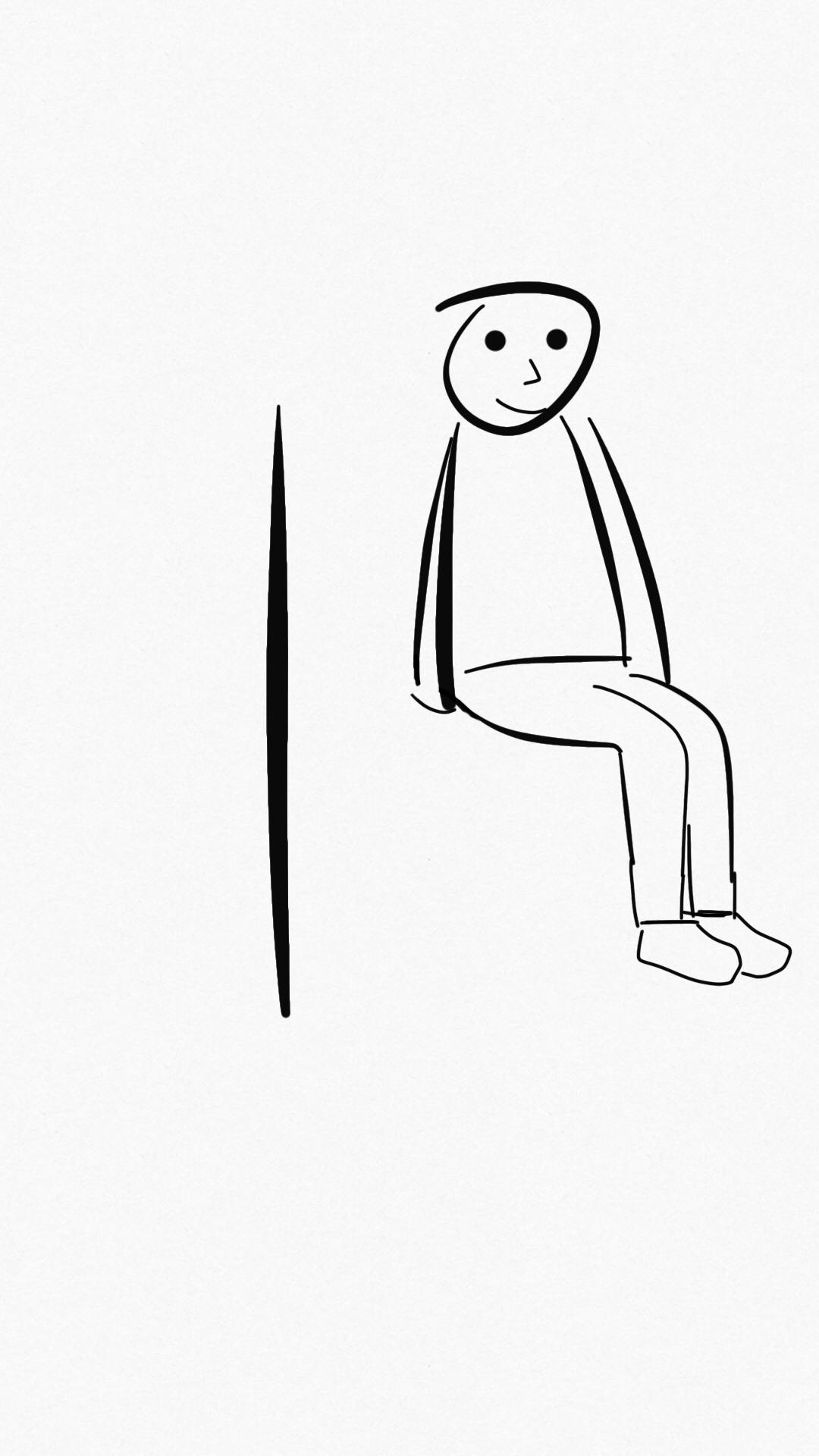 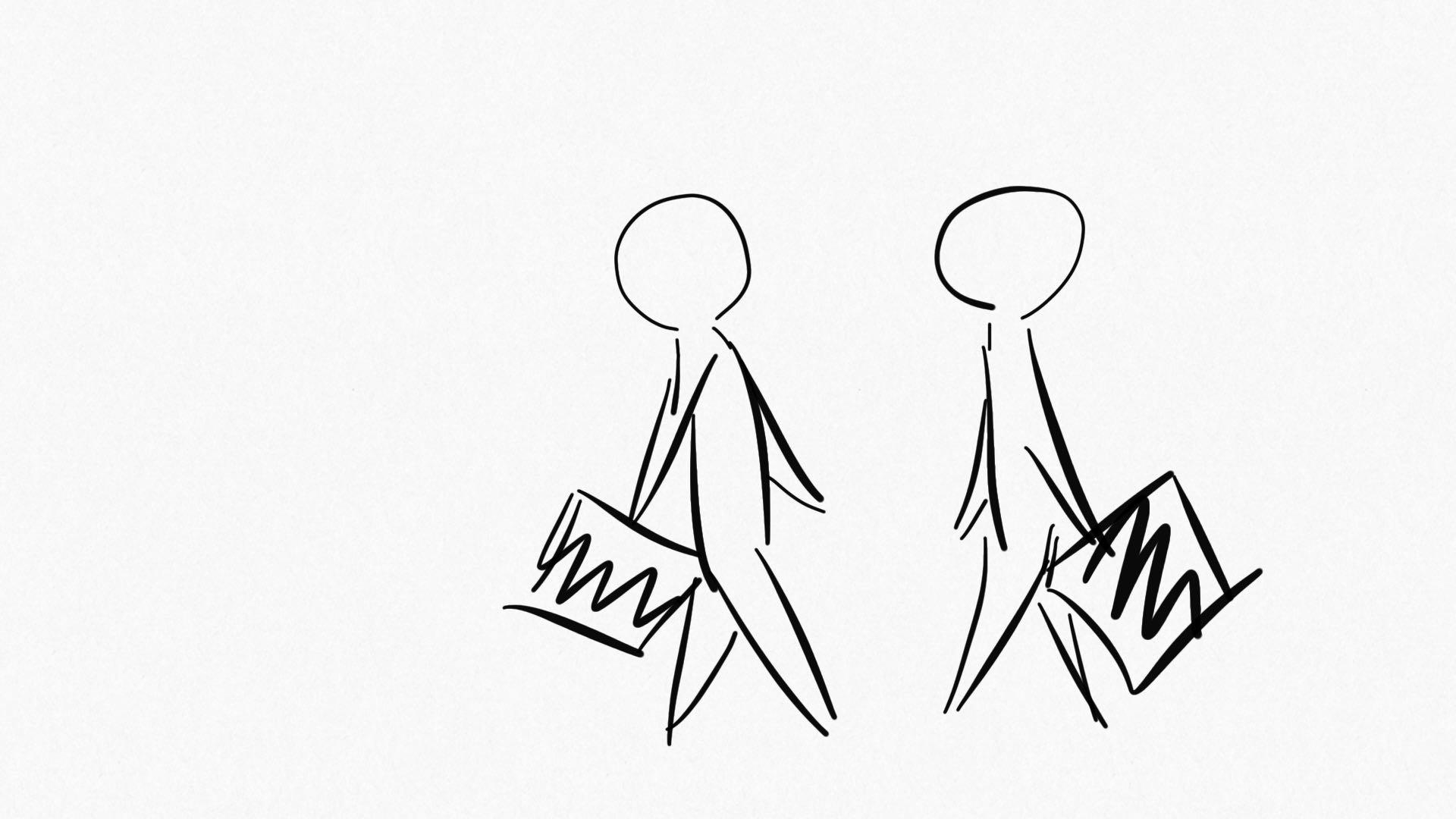 Then, I spent few hours to learn how to make it as an animation by using Adobe After Effect, which is used to make videos, and it is suitable to be used to create animation for videos. Then, based on the basic framework, I created animation for each part of the concept, and here is the final video:

I have learned how to make animation by using this software, and it is quite helpful for me to improve my knowledge as a designer, since designers need to share their ideas visually. So, in the future of my work, I am able to create bettwe quality materials to support my concepts/ideas.

On the other hand, we got some feedback from the showcase. Firstly, many feedback indicated that they expected more encouragement from the product, in other words, positive stimulation. Others expressed the desire to get more comfortable warnings. These feedbacks brought us a lot of discussion and confusion, that is because our design theme is "Bothering", it is difficult for us to find a balance between "Bothering" design and a comfortable experience for users. After seeking advice from the tutor, we decided to keep the product as much playful as possible to be the primary direction. In addition to finding a balance between "Bothering" design and product comfort, the feedback also mentioned the balance between "Bothering" and make user angry, if the user is in a special environment when using the product, for example, a work that needs to be highly focused, or being in a meeting and does not want to be disturbed. In these cases, "Bothering" that usually does not cause too much trouble is easily considered as irritating, as a result, users are very likely to give up using the product. The feedback also mentioned the lack of interactions between the product and the user. In our opinion, this will be a very serious problem and may totally change the current design. In the current design, the cushion will only passively accept information and give feedback, but the user cannot directly interact with the cushion.

Based on the feedback, additional research is needed, and I made a research plan for the team: 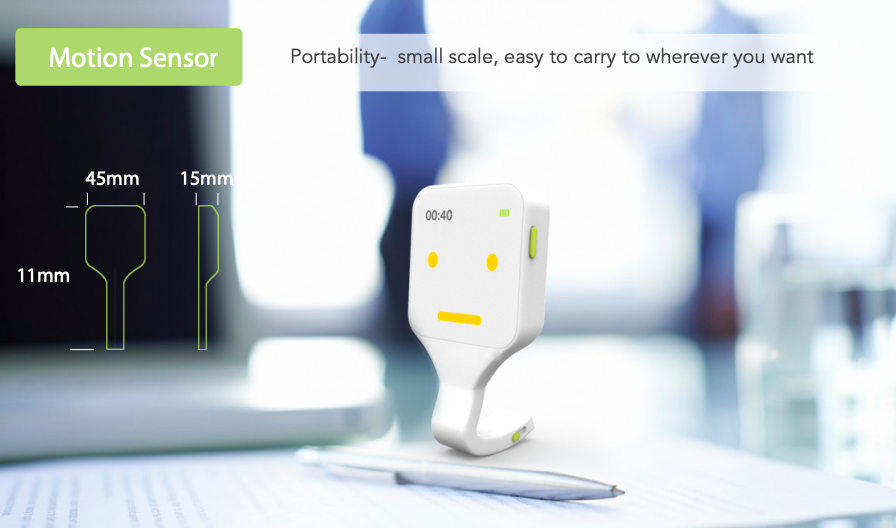 It is a little machine that used to remind people how long they have been seated on chairs. The designer added human emotions into it. So, based on the sitting time, the machine’s ‘facial expression’ will change. Such as it cries if the user have seated for long time, and he/she still keep seating; it will be a happy face if the user leaves the seat. It inspired me because, firstly, it is portable with a tiny size which means users are able to easily carry and use it anywhere they want. Especially for office workers, sometimes the limitation of the office space is one of the reasons restrict people to stop sedentary behaviour. In addition, it creatively implemented the human emotion feature into the concept. Since reducing sedentary behaviour might take really long period of time. The designer tried to make it interesting by using this way so the user might feel that someone is also staying with her/him. A kind of companion along with the user.