Wednesday was very similar to the Tuesday, except we didn't present anything. It was interesting to see more game-centered concepts in this session, and I was thinking about ways they could convert the game setting to a more everyday life setting. I spent the breaks thinking about our concept in relation to the feedback and what we had to think of in the upcoming discussion. I made an overview, which is included below. 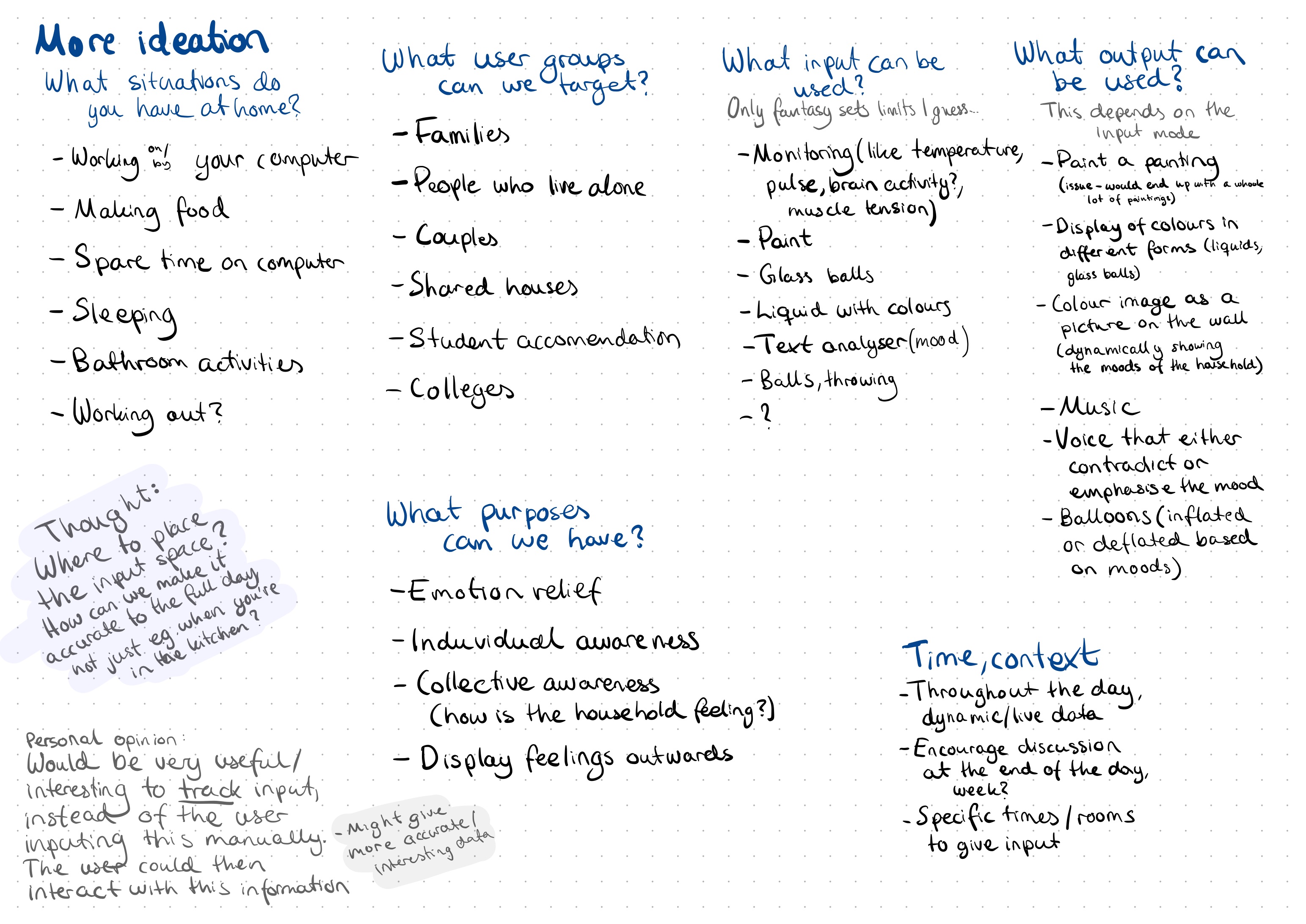 We got a total of 25 posts of feedback, which is not even half the class. That is a bit disappointing. In addition, it shines through that some just write feedback just because they have to, half to most of the comments weren't that useful. E.g. we asked for other input and output variants and we got a bunch of comments on "You should have more interactive output" or "other input would be cool", but no specific examples. We did, however, get enough feedback to know where to go with our idea, so it wasn't all useless.

Friday we had a skype-meeting to further develop the idea and look at the rest of the feedback from the class. After discussing all the feedback we used my sketches and realised that purpose would be the most important thing to figure out. Collective awareness and outward display of emotions ended up being the purpose we wanted to focus most on. This was decided based on group discussion and we all agreed.

Further, we found our user groups to be shared houses. A lot of the feedback mentioned that it would be more useful to put our original concept, which was more of an installation, to an everyday situation. In the discussion Tuesday we discussed moving it to the home and Friday we agreed on this being the new concept. Within this, our focus will be students. We thought this would be very interesting in these days, as this is a group that is probably not used to being home as much as they have to be nowadays.

We also wanted to determine what we wanted the users to leave with when using our concept. We found this a bit hard to determine and ranged from encouraging discussion to raising awareness or just emotional relief to improve communication skills. We decided to further determine this point after talking to some of our users next week.

Input and output was the next discussion point, which is where we started refining the idea more. The final idea ended up being a cylinder filled with balls that represent the people in the household. Each ball will somehow give or show feedback to represent how the person is feeling. Whether this is automatically tracked with pulse, temperature, muscle tension etc or manually input as well as how we will represent emotions as an output (colour, haptic feedback, sound, etc) is not decided yet. We consider this a good opportunity for individual exploration.

After this discussion, we have more or less completely changed our idea, although the core idea of tracking how people are feeling and showing it outwards is still standing. I feel like we have good opportunities for individual focuses here, although I am curious to see how it would get together (or not) in the end. Skype meeting worked mediocre, bad wifi etc made the meetings a bit hard but we got through it.