After the presentations, we went away and did our individual research to explore what other areas we could look into, especially in response to the feedback we received. We realised we had to narrow down our context and give our concept purpose, which it previously didn’t quite have.

I took quite an interest into visual impairment, since I felt a lot could be explored to cater to the needs of those who are visually impaired. Upon researching I discovered that was true, and often even the basic necessities are not provided to those who need it, and I’m incredibly passionate in ensuring all students are on a level playing field when it comes to learning.

After some basic research, I learnt that there were three kinds of visual impairment (I didn’t know how to put it into words before). This is handy in having an educated and professional approach to visual impairment, rather than one that’s purely based on personal interest. As someone who is short sighted, I do get a sense of the struggles as I can’t fathom living without sight, and I’m fortunate enough to have the necessities provided to be able to see rather well. However there are those who either cannot afford or it is near impossible for them to have perfect vision.

I used a colour coded format to keep track of my dot points, and what sources I got them from. I was inspired by a format my friends used in ancient history in high school. It helped me keep my sources organised and thought my research was broke up, it helped me personally. I think I’ll continue using this format. 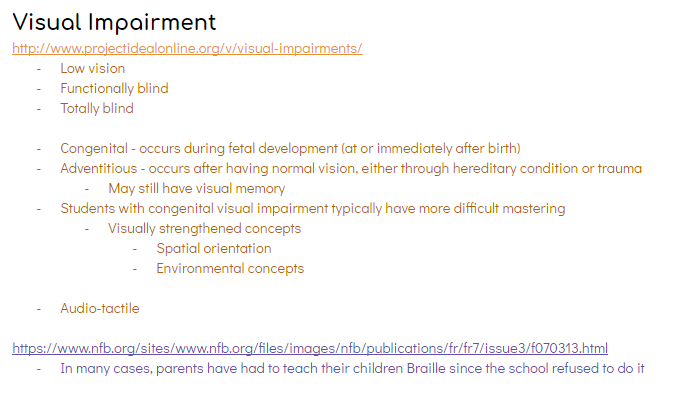 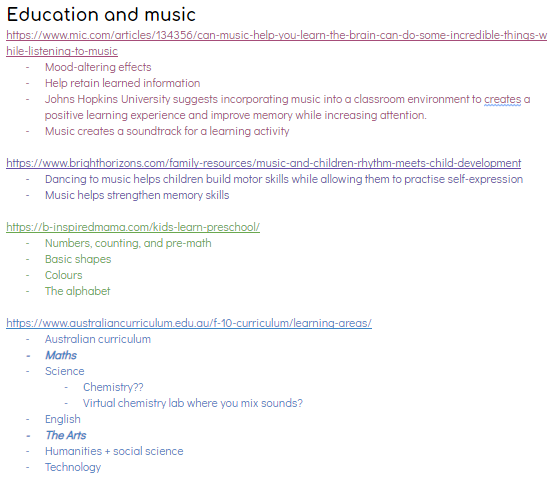 In terms of my personal idea, I went through different stages of ideation. I had several meetings with my team during and around class, about the research we’d conducted, any ideas we each came up with. We each seemed to be interested in different areas of primary school education. While I was looking primarily at visual impairment and enhancement of learning tools for children who are visually impaired, my team mates each looked at mathematics, the autism spectrum, and a deeper focus on music-enhanced learning. This encouraged a broad range of different research, and we each raised different points of focus, which we all benefited from, and I think this was a great example of how different minds can really bring different perceptions from our personal experiences, to create diverse collective research.

Initially, I wanted to create something that allowed visually impaired users to create drawings. My rough idea dump was as follows: 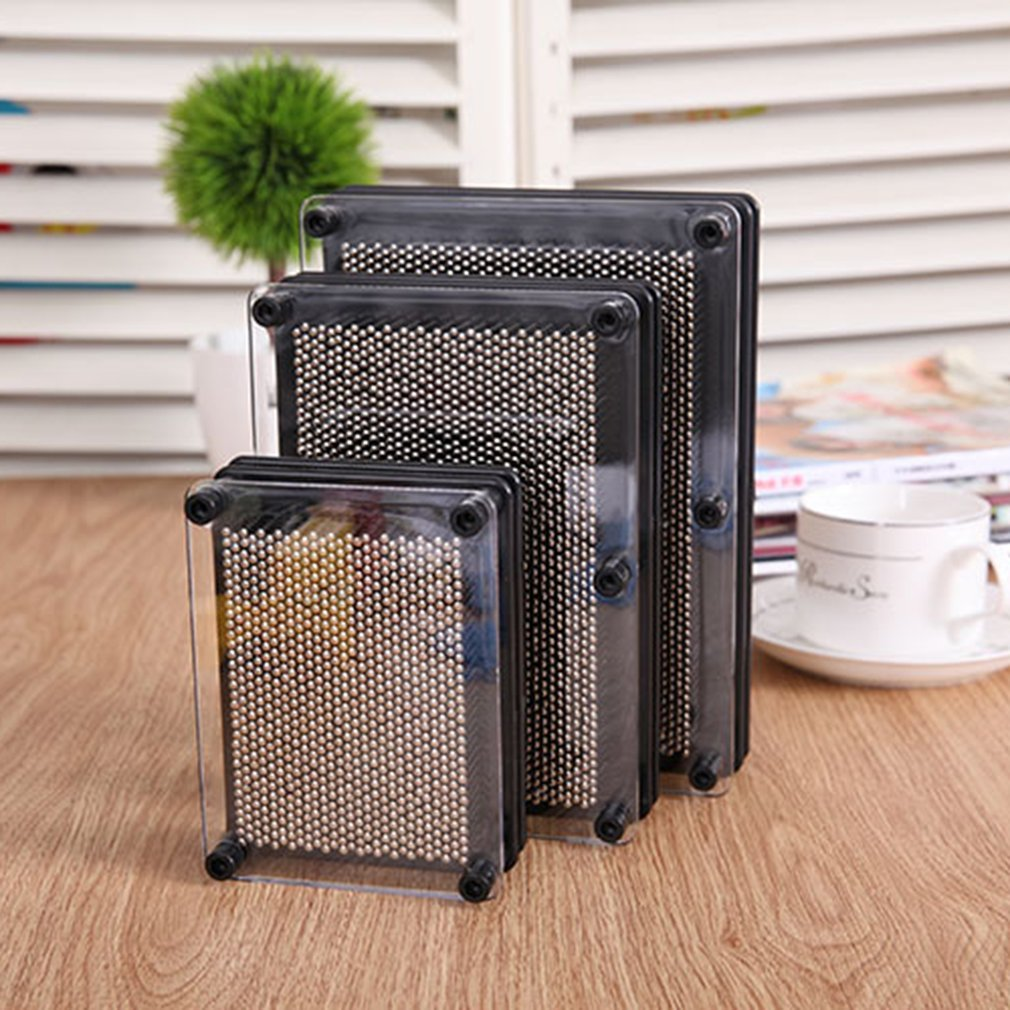 where the different pins are movable. I wrote down different ways users could draw physical lines, however I decided that it wasn’t a very feasible idea. Thus, I went back to the drawing board and believed something with numbers could be a better approach. This also meant that I could support my team’s goal in creating something similar yet different enough to the other concepts.

During my research, I was thinking different kinds of tools that one can find in a primary school classroom. Previously, I was attached to the idea of the abacus since it involves very physical interactions, and good use of colour. However, I failed to think of how I might incorporate music. Thus I ditched the idea. I then thought of a basic calculator that children use in school, and how it could be a foot pad. This was a random idea that popped into my head, since when I sit down and try to think, I don't feel I get anywhere. The footpads would be combined with a screen that displayed equations, with each number having a corresponding tune, however I realised it didn't quite cater to the needs of those who were visually impaired, since I was picturing it to be something similar to Dance Dance Revolution, but instead Dance Dance Maths (lame, I know). I also realised it would exclude those who may have any mobility issues, and I didn't enjoy the thought of that, so I considered making it into a smaller keypad with braille numbers so that kids can just press the different keys. However I realised it was essentially the keypad on computer keyboards with braille, to my disappointment. Thus, I chose to go back to a previous xylophone/piano idea.

It still needs a bit of clarifying, but I have considered the feasibility. No matter what idea I end up with, I do expect there will be a lot of changes done along the way. I've been having a lot of issues with ideation, and it does make me upset, since I manage to come up with bizarre ideas when it comes to what I want to draw (out of the blue, I can easily choose to draw a pigeon with slicked back feathers saying "it ain't easy bein' sleazy"), but for the life of me, I can't sit down and think of a grand idea. I think part of the issue does come from the fact I hadn't chosen musical things as one of my preferences in World Café, which is something I noticed earlier. I have managed to garner an interest, since it mostly stemmed from lack of knowledge in the area, however it has been rather difficult. I know I had trouble in DECO2300 last semester too, and I think knowing I'm not the best at coming up with an excellent idea on the spot puts me down a bit too, along with the other challenges that have recently come into play. Of course, challenges come and go, but I really wish I had a bit more of a creative mind when it came to things that really mattered. I think my focus for now is to not bring myself down, and continue researching my areas of interest, since broadening my knowledge always expands the areas I know I can explore into with concept ideation.

While I did discover there were existing tools for visually impaired people to draw, I still am rather attached to the idea, and wherever I go, I hope I can incorporate a feature such as that into it.