After going through all the critiques as a team, there were a few recurring trends and themes that resonated with me. These themes revolving around accessibility considerations and emotional colour theory.

With that in mind I began to further develop the pitched concept - Twisted, into a system that would facilitate the needs of colour blind and visually impaired users.

I started with the thought that I wanted to contextualise colour, for this user group, through audio feedback. Thus, the emotional ties individuals can form with colour could be simulated through audio.

From here, I ideated for a mat with three columns: happy, sad and angry. Colours corresponding to each of these emotions would be randomly distributed on a grid based mat. Each colour would also have a sound attributed to them (happy sounds = C Major Scale). Users could then move the colour and respective sound into the row that they believe it reflected (eg blue=sad, so move to the sad column). Then, the users could 'play' the colours in that row from left to right. The audio tracks of the colours would then sound and colours with a similar colour palette should sounds complementary. The same would apply for the inverse (a colour clashing within the row would sound out of place). However, there was a great deal of subjectivity in this concept. With that and the fact that this is targeted at 6 year olds in mind, I decided it might be beneficial to move to a more 'objective' approach to contextualising colour 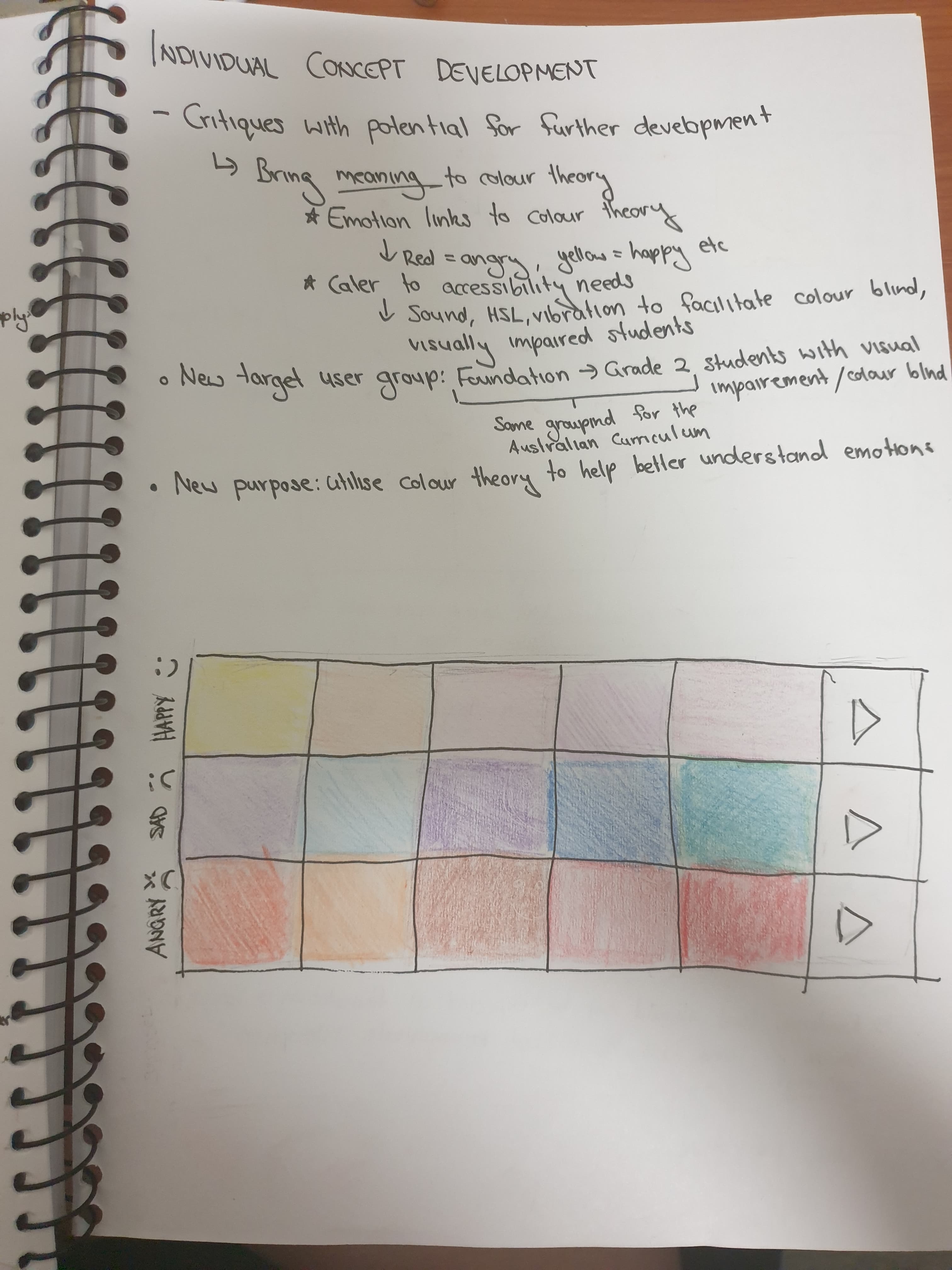 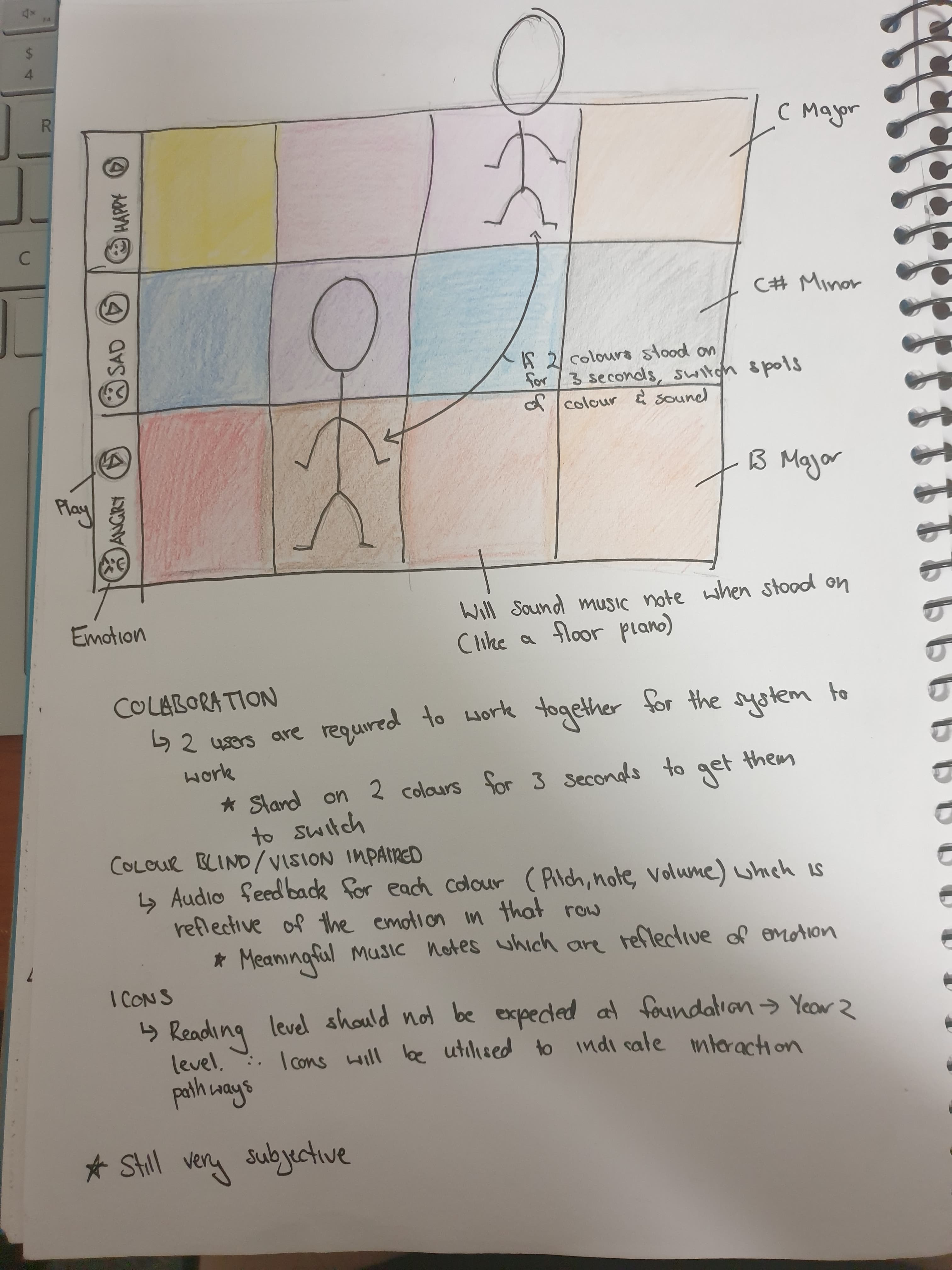 I then tried to ideate for an objective link between colours and sound. Nature seemed like a familiar context for the user group so I pursued that route. Colours like blue would be linked to running water and red to fire etc. Colours would, again, be randomly distributed on a grid-based mat. Users would then have to move the sound/colour to suit the appropriate picture overlap (the images would remain in a static position while the colours behind would be able to move). While I was starting to appreciate the objectivity of the concept, I was back to square one with a closed interaction approach where there was a 'right' interaction with the system. We received feedback suggesting against that approach in our original team pitch. So, I wasn't happy with that aspect of the new concept and was starting to think having a static image and moving colours may be confusing to such a young target user group. Finally, I also noticed how I had started to drift away from the purpose of 'emotional' colour theory. 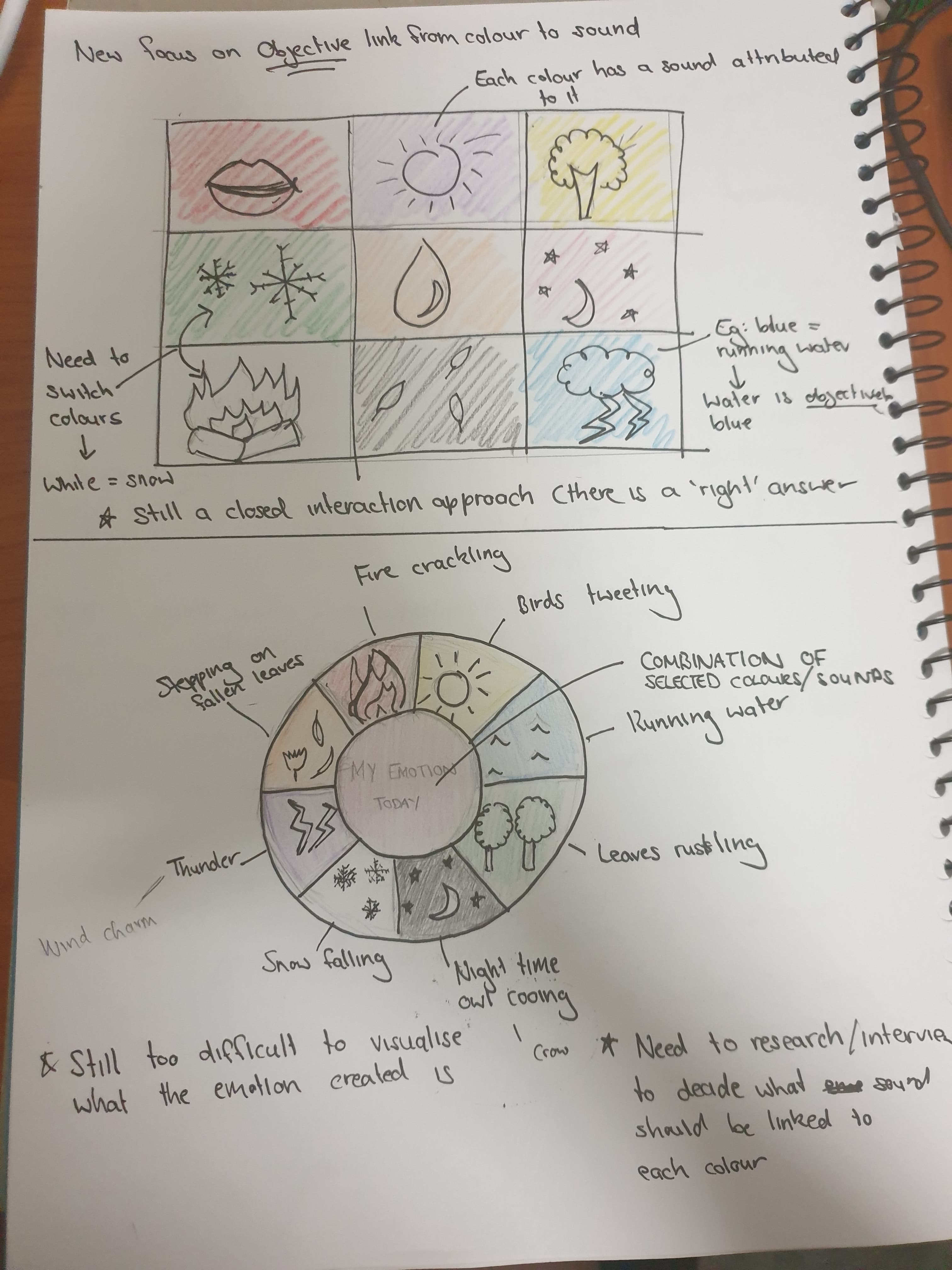 So, I moved away from the grid-based approach because I found it limiting and needed a fresh take on things. This time I started with a circular form. Arcs of the circle acted as colour 'buckets' which could be used to mix colours together. I kept on with the 'objective' links between colour and sound but wanted to use this combination to facilitate creativity. Now, the concept revolves around mixing colours together to reflect the user's current emotion. Just as the colour mix, so would the associated audio - hence forming an audio narrative for visually impaired and colour blind users. Users could then draw a face in the centre of the mat with this generate colour/sound. Then a direct and visual/audio link can be made between the users emotion and the colour/sound they created 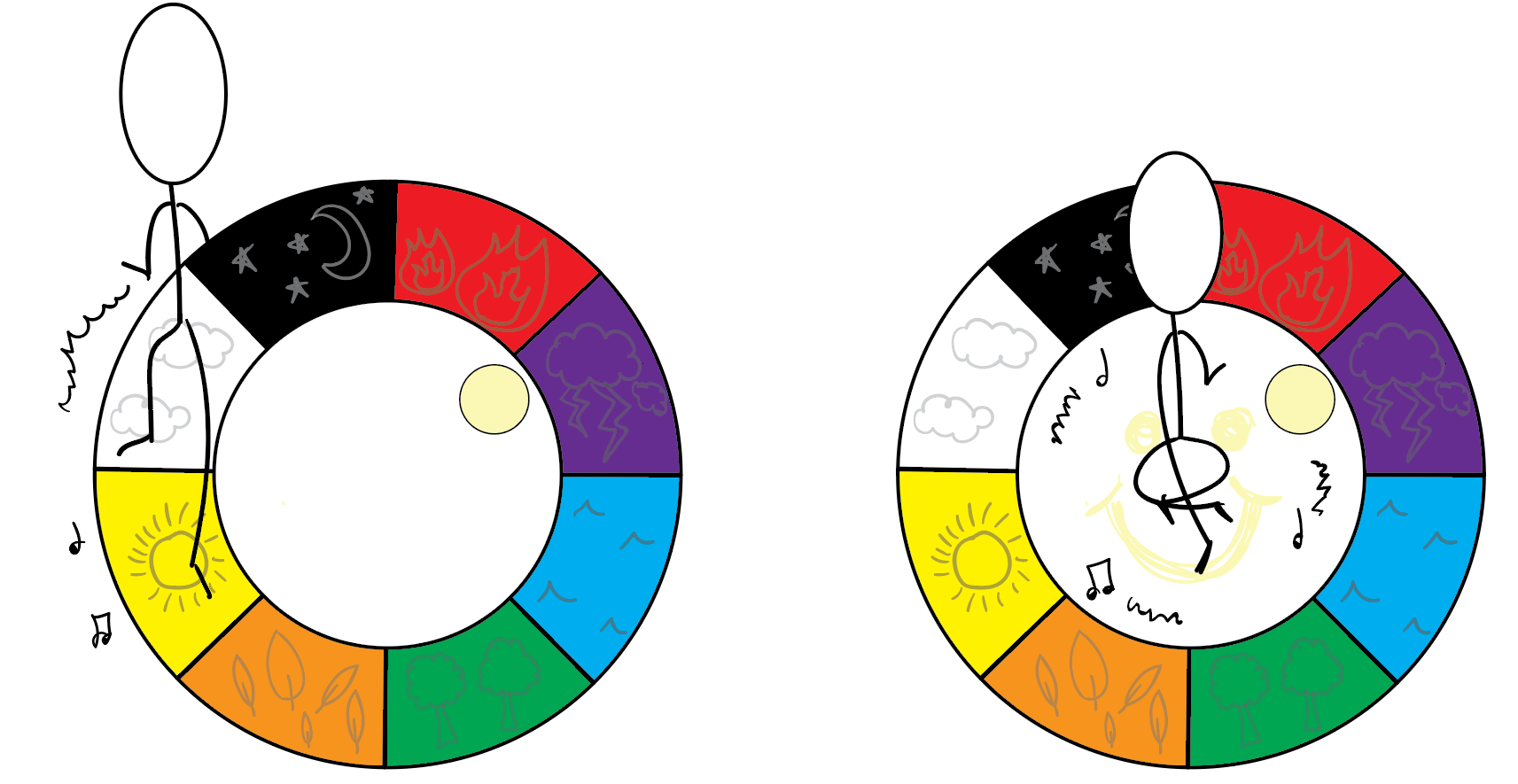 Well, it did take a very intensive week of iterating upon an initial concept - but I am starting to feel a lot more confident with the design direction I am not following. I have done a fair bit of research around the domain, the Australian curriculum and the benefits of colour theory. So, hopefully this concept has some solid foundations for future iteration.

I still have a fair bit to do in relation to objective links between sound and colour - access to the target user group would be especially useful. But, I will have to find workarounds - I have started with some discussions with friends and family. Other than that - Individual report writing will occupy me for the next while as will reading through the team section of the report

REFLECTION: I think the audio feedback was a necessary excercise of trial and error. I had to realise that an objective form of audio feedback was needed but, in order to achieve that, I first needed to realise that combining colour mixing, music and emotional intelligence was too much for a six year old to process. It is really strange to look back on where my train of thought was going with the audio feedback component. I really wanted a way of contextualising the colour mixing process for users who could not actively perceive it. That said, I think I became a bit too transfixed with this potential and, as such, lost a bit of my focus on promoting an understanding of colour theory