The Tuesday class consisted of reporting back on what everyone had done and any concerns. I felt this class to be somewhat useless, it was difficult to hear what people were saying and a lot of repetition since every team member were answering the same questions.

After that, however, my team and I had a discussion on what to do with our concept. We tried defining who was doing what part of the prototype and we spent the time coming up with a template for a user research. We wanted to know more about our users before deciding on an idea, specifically we wanted to know more about what they would want the purpose of such a concept to be, what would they get out of having their emotions on display like in the concept.

Our intended learning outcomes of the interviews were:

The interview I did (digitally) was very interesting. I got a lot of new feedback on how to do and not do it. My participant was mentioning how they were good at sharing feelings, in the form of discussion. They did not see the point of our concept because they couldn't imagine being in that situation where you lived with someone that you couldn't communicate with. On the other hand, they had friends who never wanted to show emotions and they could not imagine them ever being like "I'm angry" or wanting to display their emotions to anyone they live with, except from their very close ones.

This was very interesting because it had me question the purpose of the concept - my interviewee didn't seem to want to display emotions like we had imagined - why not just talk about it? The only way they could see a visual or audio display of their emotions to be useful was if they were in the extremes of negative emotions and did not want to talk about it (yet).

This sparked me to think that we might be able to focus less on the negative emotions (that people might not wanna share - or is already sharing), and more on the positive emotions. I made the below sketch for my thoughts before the Thursday workshop. 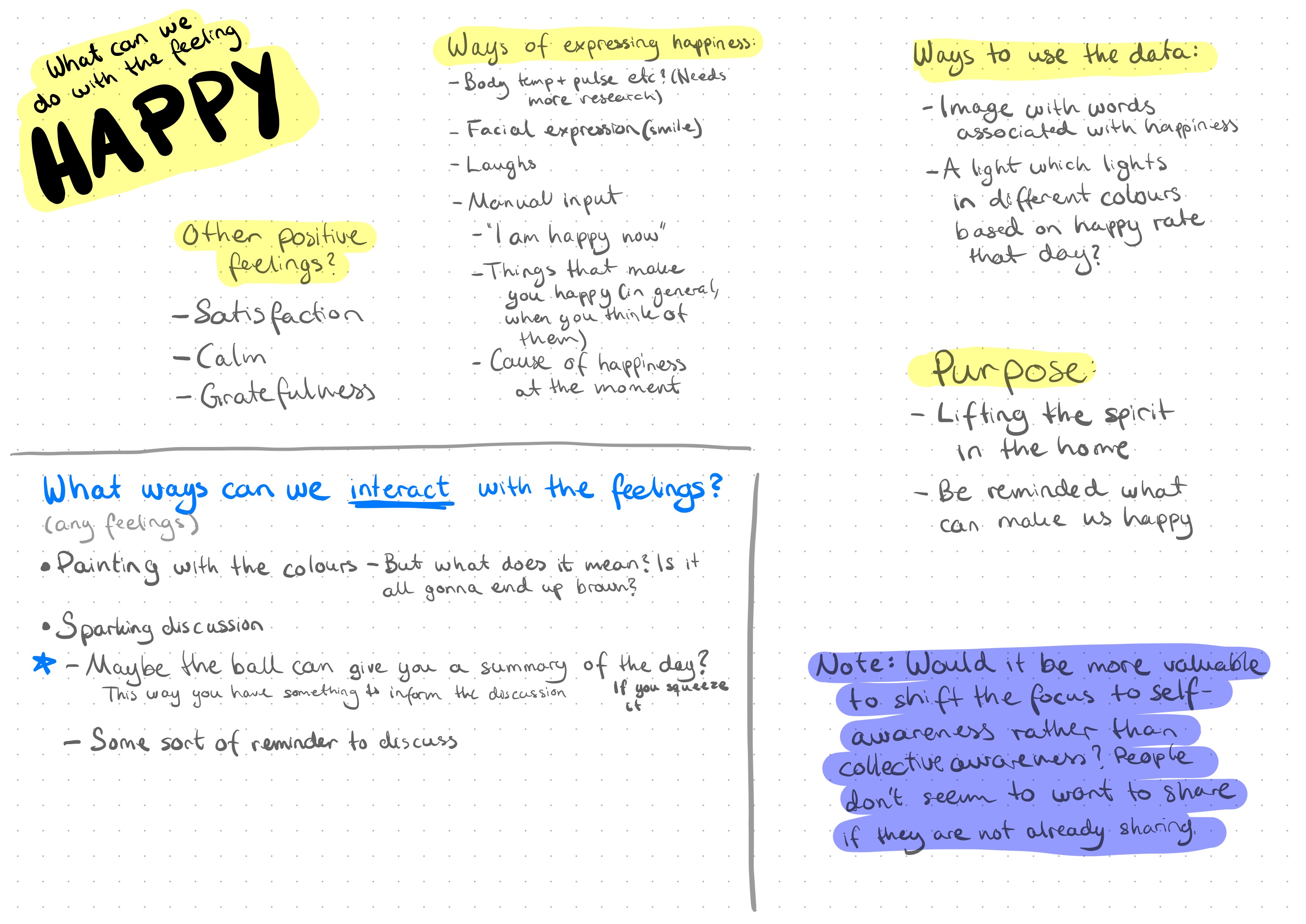 The Thursday class was good because we got time to work with the project while having tutors available. We went through the data from the interviews and noticed a trend of people talking about their emotions if they wanted to, or being comfortable with not talking about them if they didn't. We had a chat with Steven who prompted us to figure out what goal we were trying to achieve. We had an interesting discussion of different things we wanted to achieve - from lifting the spirit at home to removing negative emotions. We wrote down each time we had a different wording of a sentence and ended up with "Encourage positive emotional sharing with close ones remotely" as our main goal. Then we had to find questions and target audience to "solve" this. We had a break and developed one idea each, my idea ended up being the one below: 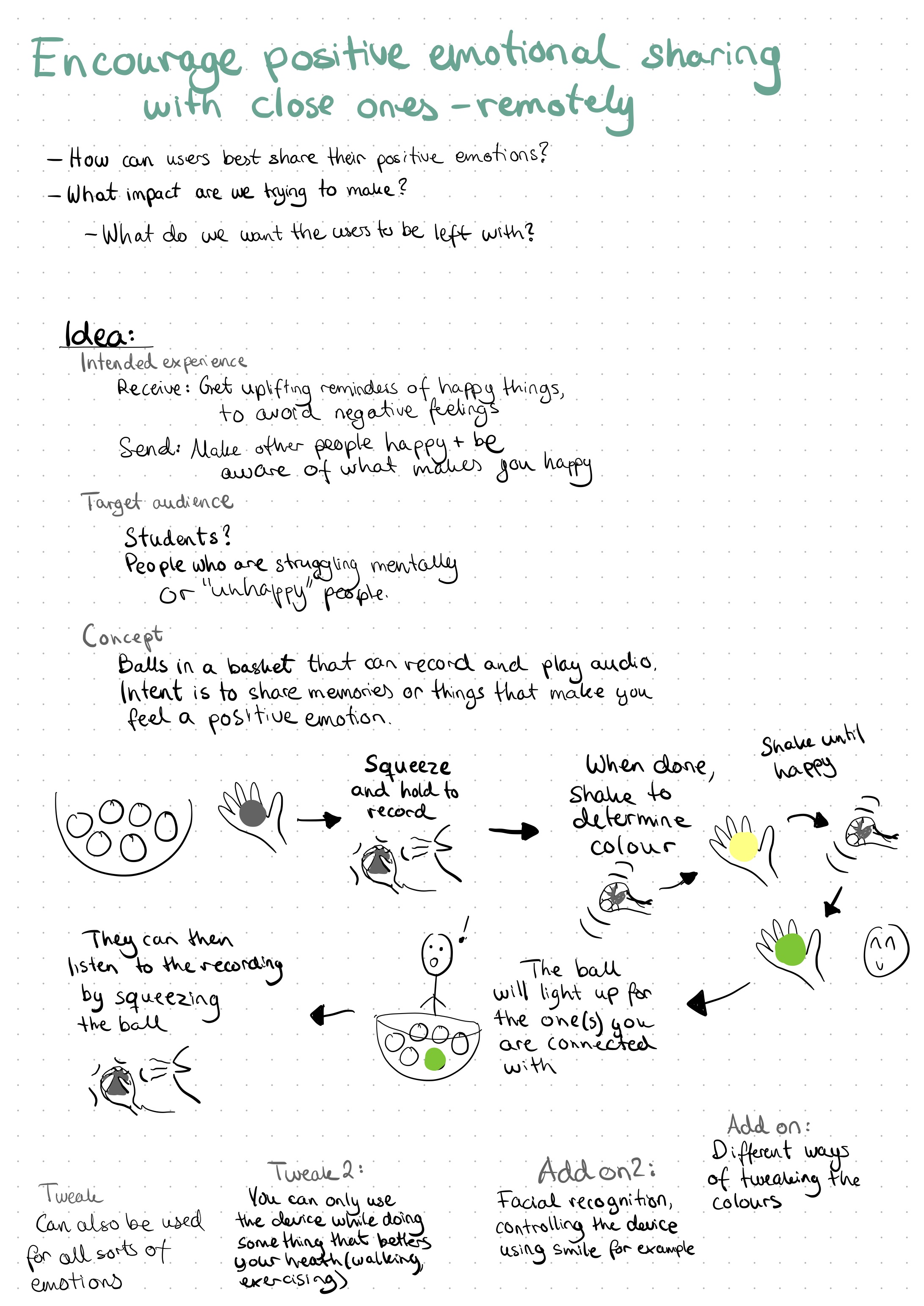 This way we would incorporate novel ways of interacting, it would be playful and hopefully fit the goal. I added several different tweaks and add one that could be considered as well.

After discussing all the ideas, we ended up with a concept very similar to the idea I presented. This can be an interesting and fun way of sharing between households and lifting the spirit. Throughout the week we are going to write in the proposal about what we are planning to do and do some research on the field(s).

I'm generally excited for this course still, even though it has changed a lot. I am curious about the testing (if happening at all) but other than that I am excited for the development and seeing how it all evolves. I think my team has done a good job of communicating. We have a lot of different ideas and no one really knows where we want this to end up in terms of concept, and I think we are doing a good job with asking constructive questions to help ideate and build on ideas, rather than being critical.