The vast majority of comments made this suggestion, so we focused on this aspect. Indeed, in our design, hitting items were selected for pressure relief. Based on our initial research, this may be suitable for some people. But in the comments we received, we also found more suggestions, such as touching virtual animals or meditation, which are some more peaceful ways to relieve stress. We discussed the current design principles in detail, and according to the suggestions received, there are indeed some violent factors in our plan, which may not be healthy for our target group. After discussion, we hope to find a healthy way to relieve stress. In the comments, we found suggestions for exercise to relieve stress. We quickly adopted this suggestion. First of all, sports are more suitable for our current ideas. Then, in the initial survey literature, we also found effective evidence that exercise can relieve stress. Therefore, we decided to change the direction to exercise to release pressure. In the next plan, we will conduct more investigations in terms of exercise to relieve stress.

This is a very worthwhile point of view. For different people, the stress in life may bring positive or negative effects, which may be related to everyone's feelings about stress. In our design, our target group is the pressure group. Such a statement may not be comprehensive. Our design should be based on user needs. Therefore, the concept should be aimed at people who are stressed and uncomfortable with current stress and need to relieve stress. As mentioned in the comments, stress has positive effects, but in our concept, we should focus more on the negative effects of stress and help those who are facing the negative effects of stress to relieve stress. 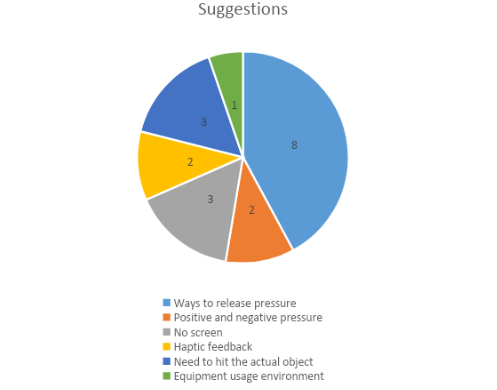 In Tuesday class, we report back on what everyone had done and any concerns. Everyone was answering the same question that they had done last week in the report.

Running behind on your journals! Don't forget about these as you work on your project. Something strange has happened with the images on your earlier posts - has your account closed? Documentation and reflection wise, make sure to write this from your perspective, you use "we" a lot in your descriptions.