In week 6 we completed our report. It was quite a bit of effort that required a lot of individual and collaborative work. I had trouble beginning my individual section, but I managed to easily summarise our response to feedback, which was the part of the team section that I was responsible for writing. The lead up to the deadline was a bit nerve-wracking, but we managed to submit it 2 hours ahead of time, which was excellent! We set multiple objectives and deadlines ourselves, and maintained a system of having a Zoom call open while we did our work, to simulate a public studying space. It has a similar effect to working in a library, where you have the pressure of studying like everyone else, and not procrastinating to avoid judgment. I found this to be incredibly effective, for me personally, and my team members seemed to enjoy it too. I had some trouble trying to refine my concept, but I had a look at different sources and examples to get inspiration from. In my personal introduction, I think I wrote a bit too much about myself. I went into depth about my preferred methods, and a bit about what my team had discussed, which contributed to the great size of the paragraphs. In hindsight, I should’ve written significantly less, but when I revised my writing and tried cutting it down, I still ended up with rather large paragraphs.

In class, we used Miro to look at alternative methods of conducting field research. 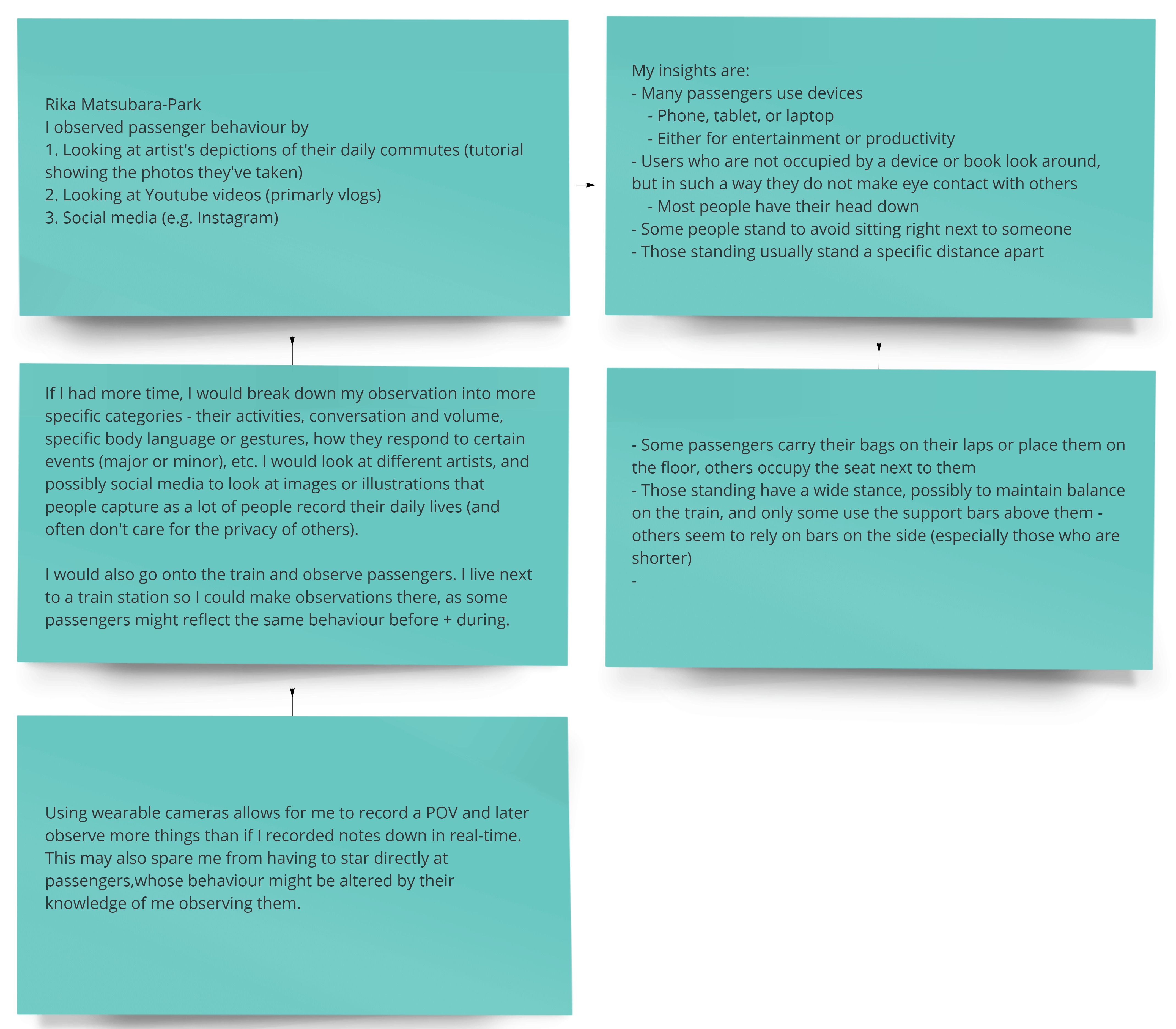 We were required to observe train passengers, without actually being on a train ourselves. To be honest, I found this activity to be a bit difficult, since I used to take the train everyday, and I’ve made observations on my four years of taking trains to uni. It was fun exploring other means; and those that I thought would provide insight on passenger behaviour didn’t provide as much as I believed they would. This mostly applied to Youtube videos of passengers on trains, as a significant amount of them were vlogs, and would primarily contain the vlogger themselves, who generally try not to show others’ faces. Anyhow, I still managed to make some observations through the occasional shot of passengers. This also led me to look at other social media, primarily Instagram, where I've come across either photos of or artists’ illustrations of train passengers (my third method of observation). Instagram users had taken pictures of their trips, whether it was a casual trip into the CBD, or to a sports event. The different kinds of context were evident within the image.

While the artists’ illustrations depict their perception from within the train, and they have the option to emphasise specific people or scenes, I feel they draw a lot of attention and detail in the presence of the person. One artist drew many people with their head down, whether that was due to them being asleep, reading a book, looking at their phone, or simply just bored and looking around. These things were observed by the artist as being important or interesting factors. I enjoyed using the Miro board; I could see what other students had written as their means of research, and one that piqued my interest in particular was news footage. This made sense to me, since news footage generally captures natural movement of people in public spaces, and I believe some people respond less negatively to professional cameras, than to a vlogger with an intrusive selfie stick.

We continued to use Miro in our teams, and created a separate one for our group. We looked at refining our context, and breaking it down into the parts advised by the teaching team. This helped us clarify our context and concepts, and ensure we were all on the same page, which is incredibly important when doing a group project. I also used it to clarify my individual direction for the project, as it outlined the key information I was required to establish to claim that I had a clear understanding of where I wanted to go. 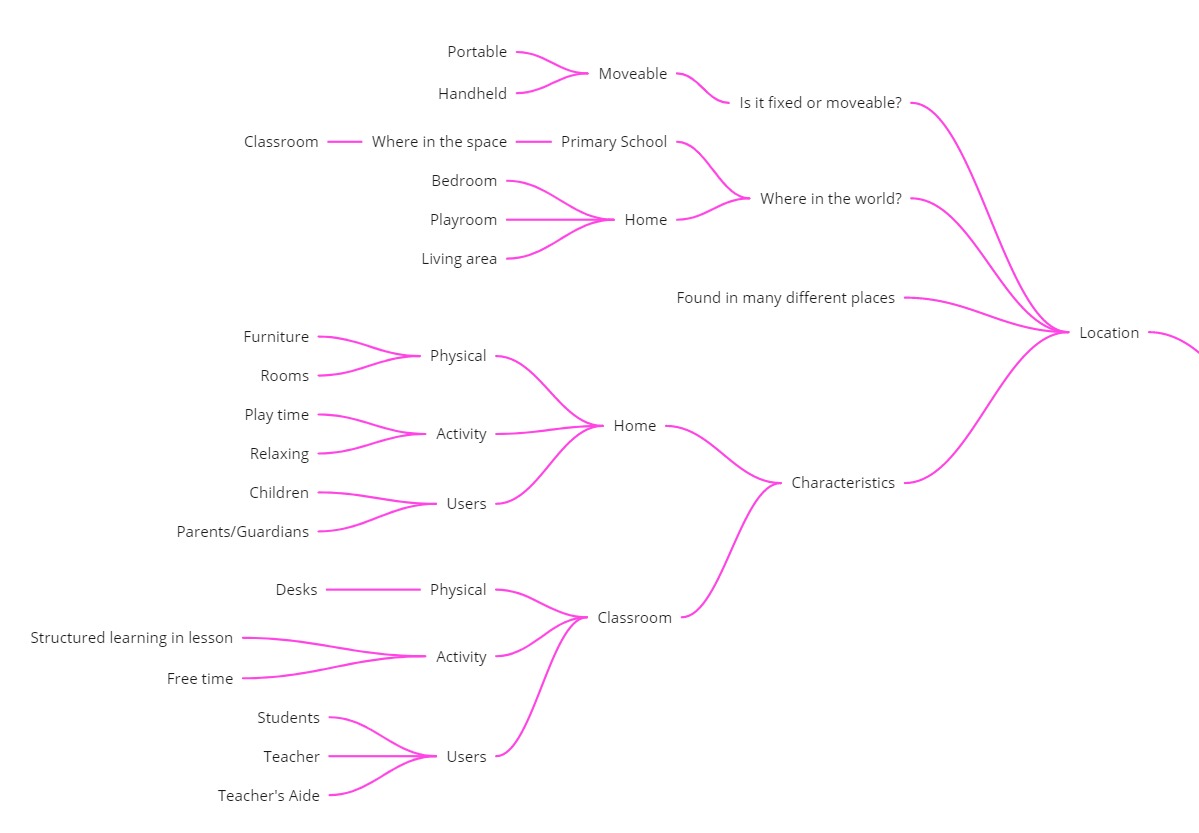 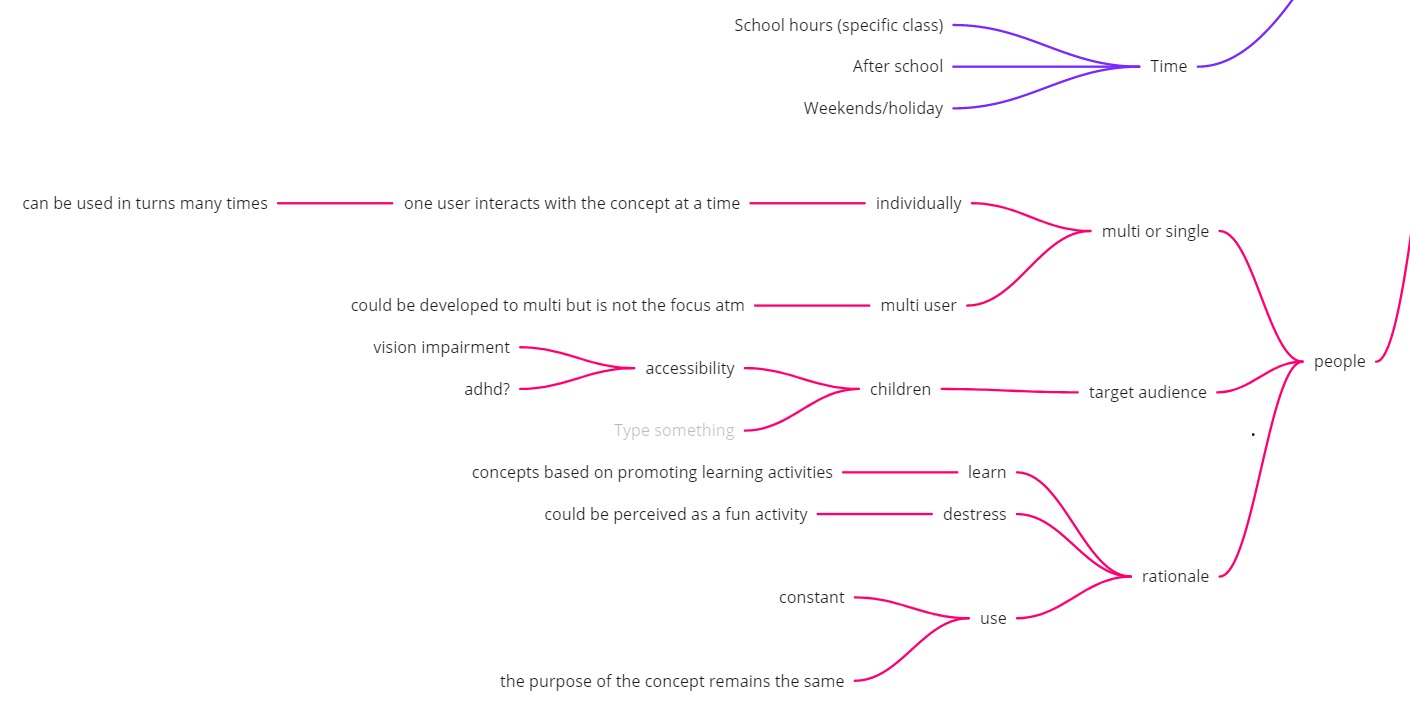 In our workshop, we also looked at the Arduino. We went through some basics of the set up, and what sensors I should be expecting in the auxiliary kit. I plan to do some further work and testing in the mid sem break.