What is my concept / individual focus / individual responsibility for the project? Include a text-based description and imagery to support (sketches, photos etc).

The concept is Four Strip Patches, which are targeted to people who have long-time sitting at home. This concept addresses the negative effects caused by the sedentary behaviour by providing a visual and playful indication, which aims to increase the user’s awareness of long-time sitting and reduce the sitting time by encourage the user to do light activities. They are four patches (8cm * 2.5cm) with display areas (fiber optic material) on the front and attachable material on the back (figure 2.1). The user is able to attach them anywhere on the clothes and remove them from the clothes, which aims to provide a more flexible and personalized way to wear the devices (figure 2.2). Moreover, they are easily accessible and portable so they can be used in different environments and places. 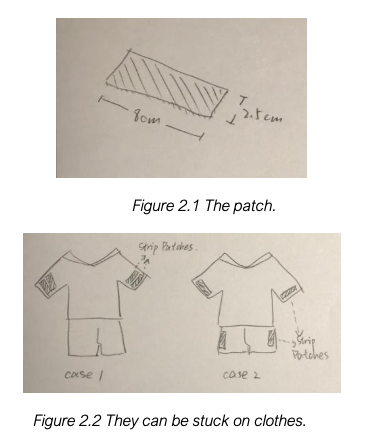 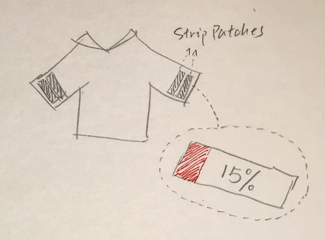 The patches start to count the time once the user sits down with patches on his/her clothes. The time is expressed as a percentage on the display areas, such as 0% at the start. Also, as an additional reminder, the display areas will gradually illuminate over time (figure 2.3). Patches begin to bleep constantly when the percentage of the time reaches up to 100% (55 minutes).

Based on the distance between each patch, after that, one of two interactive games below will be activated.

Case 1: When patches are close to each other (figure2.4).

It is similar to the game of Whac-A-Mole (figure 2.5). A patch is randomly selected by the system, and the lighting on this patch starts to appear for 0.2 seconds. Then, it is fully off and another patch will be selected. It is repeated until the game is over. The user is required to slap the patch, and the game is over when the user can successfully slap the patches for 20 times.

The user is required to move/shake the body parts that have patches on the clothes constantly, and the percentage of the sitting time will be reduced gradually. For example, if the user sticks patches on the sleeves, then the user needs to shake his/her arms constantly until the number turns back to 0 (figure 2.7). 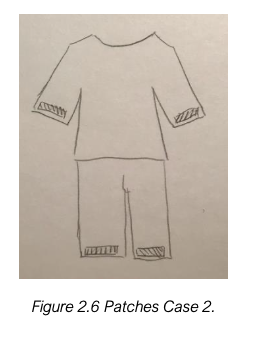 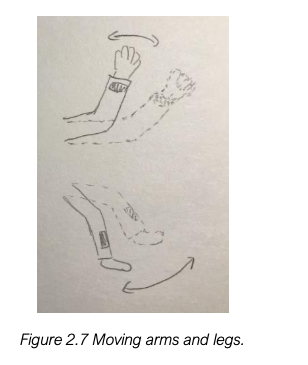 In order explore the problem space in different directions, reducing sedentary behaviours in office (public space) is focused as my design direction.

This question will be answered in the following part.

this week, online interviews were held in order to answer the questions identified in the previous report, such as how target audience think about the concept in terms of wearable technology, playful elements, and annoying features, their requirement and needs in terms of reducing the sedentary behaviours in office, the impacts of their characteristics on reducing long-time sitting in office, and explore the things in office that can be used in our concept. Five interviewees were invited. They are our friends and they are also work in office. The interview session were held via Zoom.

There are a number of key findings:

Current improved concept based on these information:

The improved concept is mainly based on the previous concept, and three features would be changed. Firstly, the number of strips is reduced to two from four. Secondly, it involves multiple users to interact with each other, and the annoying feature ‘Beep’ is also changed. Specifically, when multiple users are sitted for long periods, such as one hour, their strips will start shocking and light up with the same colour. They can only unlock the strips by touching other people’s strips with their own strips, which means they need to walk around and search the colleagues who have the same colour. Moreover, when they are getting closer to each other, the light will flash more strongly. It aims to guide users to find each other rather than walking around and wasting time. Furthermore, the playful interaction is changed. In the previous concept, it has two modes based on the distance between strips; however, they might make users much more tired rather than taking rest. So, a new playful interaction is implemented. Specifically, it is similar to the first mode, but multiple users are involved. After the strips are unlocked, a simply interactive game that aims to stretch body is activated among them. One of strips among these users will be lighted. The user who owns the strip needs to touch it, then the ‘light’ will move to another user’s one of strips, and so on. The game will be finished after few rounds.

The ideal finished product would be, firstly, a wearable strip with main functions can be built up rather than multiple components that implement different functions. Also, the strip’s appearance should be well enough. I mean there is no circuit or cables showing out of the strip. So, it reaches a basic level of aesthetics. In addition, users are able to interact with it without confusion, which means the overall operation and interaction are acceptable and easy to learn and use.

Explore a design principle, and implement it in the concept. In order to systematically and scientifically develop the concept/product, it is necessary to implement design principles. Since it is designed for everyday life with playful and open-ended interactions, which means it might involve a series of interaction process. For instance, how the user encounters, explores, discovers, and adjusts it. So, it is important to ensure the user is able to interact with it without confusion. Additional academic research is needed to discover which principle is suitable for the concept. The retrieval range can be the study of design cases in which an interactive, and open-ended playful environment.