It was great to get back into the studio after the break. I think I was pretty productive over the midsem, and I think this was validated during report back. As I have previously mentioned, I was able to get colour mixing to work and settled on potential audio tracks to play for my colour mixing

I also reached the conclusion that I wanted to move away from emotional intelligence within my individual design direction. I believe it was getting overly complex for the target users and this was validated in some follow up discussions I had with some experts. My main task for the coming week is mapping out how my physical interaction was going to be implemented and finding an effective way of incorporating audio.

I had some further discussions with an expert user and an interesting point of mixing sound was brought up. The expert said that they would expect the sound of yellow and red mixing together should sound like orange - not an overlayed track of the two. I had completely overlooked this perspective but believe it is a more effective interaction approach: 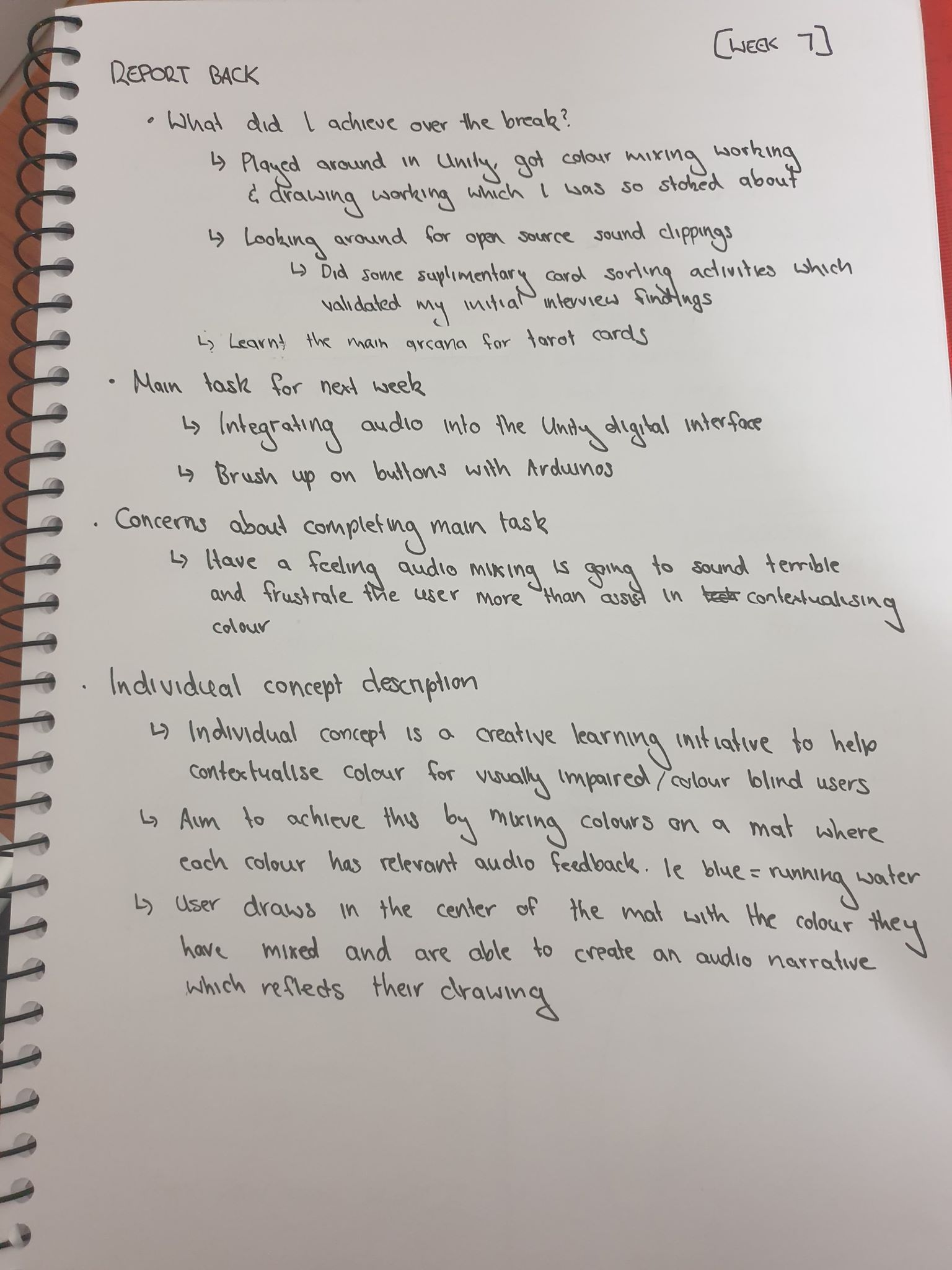 I was super happy with my progress in the workshop. I mapped out how I will likely separate my digital interface and physical interaction for the next prototyping round. This can be seen below: 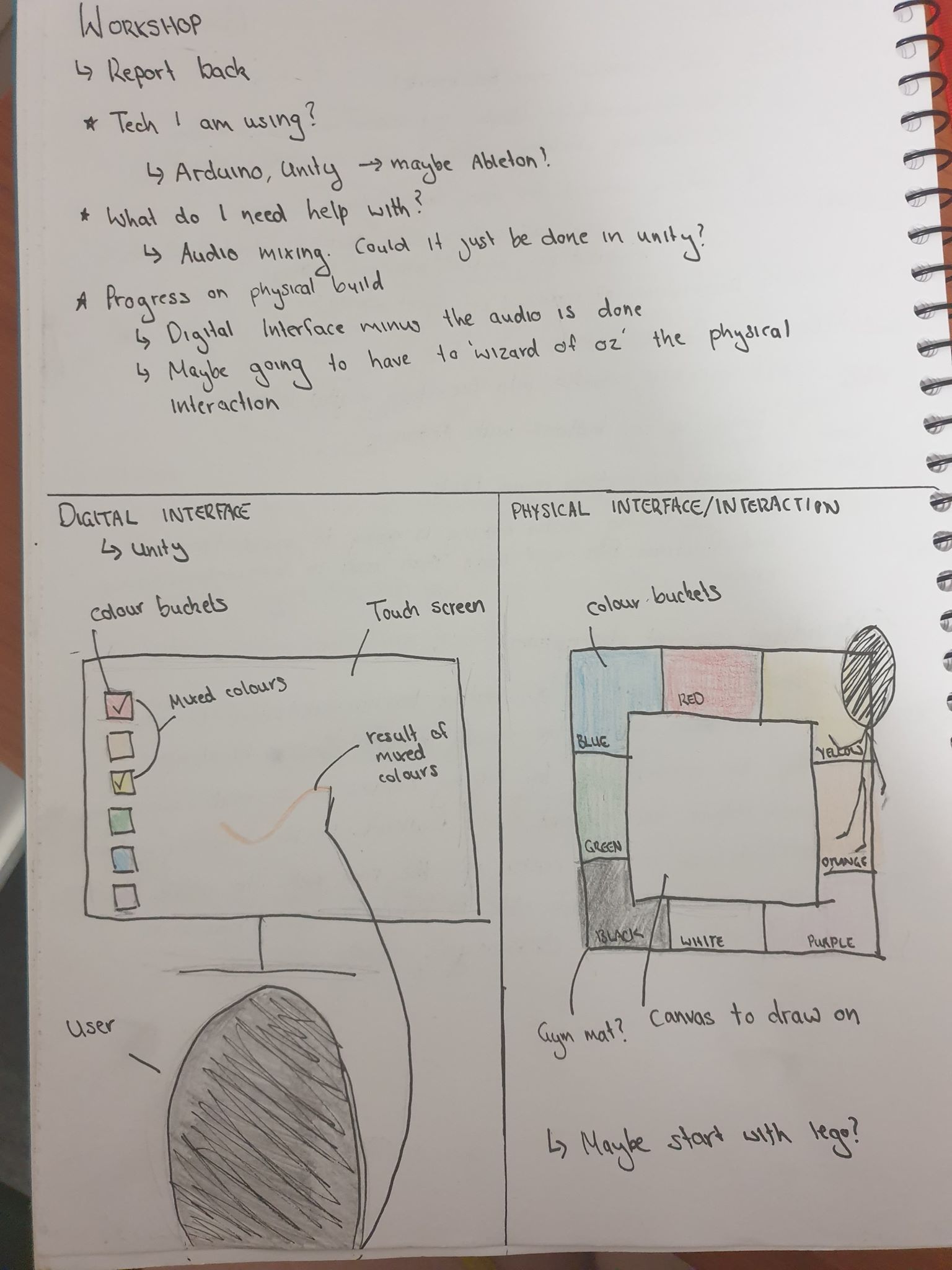 I then went on to msp out a potential circuit for my physical interaction in addition to how I intend for my buttons to be activated. I think I am happy with using two pieces of a yoga/gym mats with metal attached to each piece. Foam will be inbetween the two to stop the metal from contacting. When pressure is applied to the top layer of the mat, a signal can be read in from the arduino to my digital interface: 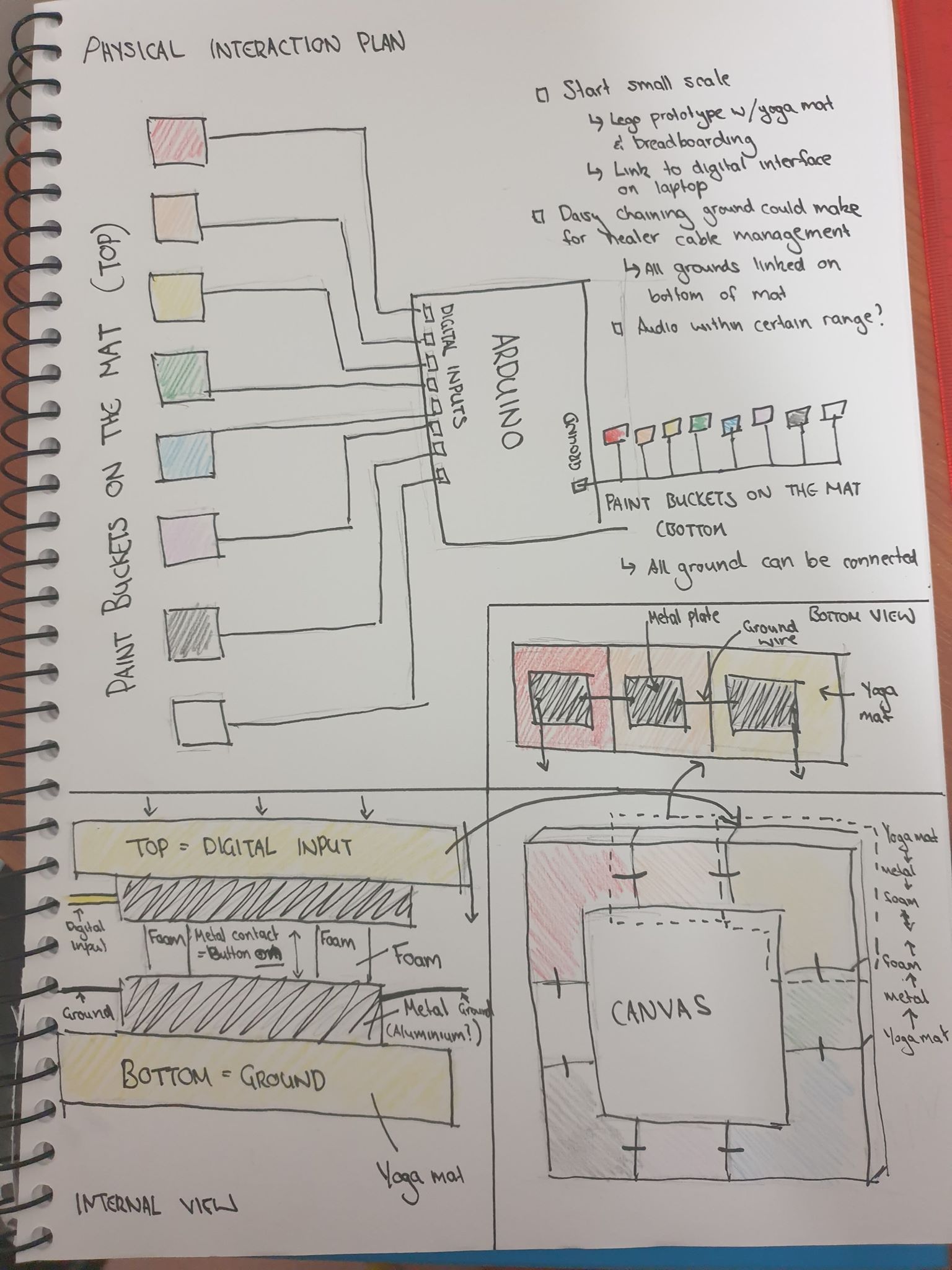 I also made a crude prototype of my mat out of lego. I think starting small scale might be a good way to approach this: 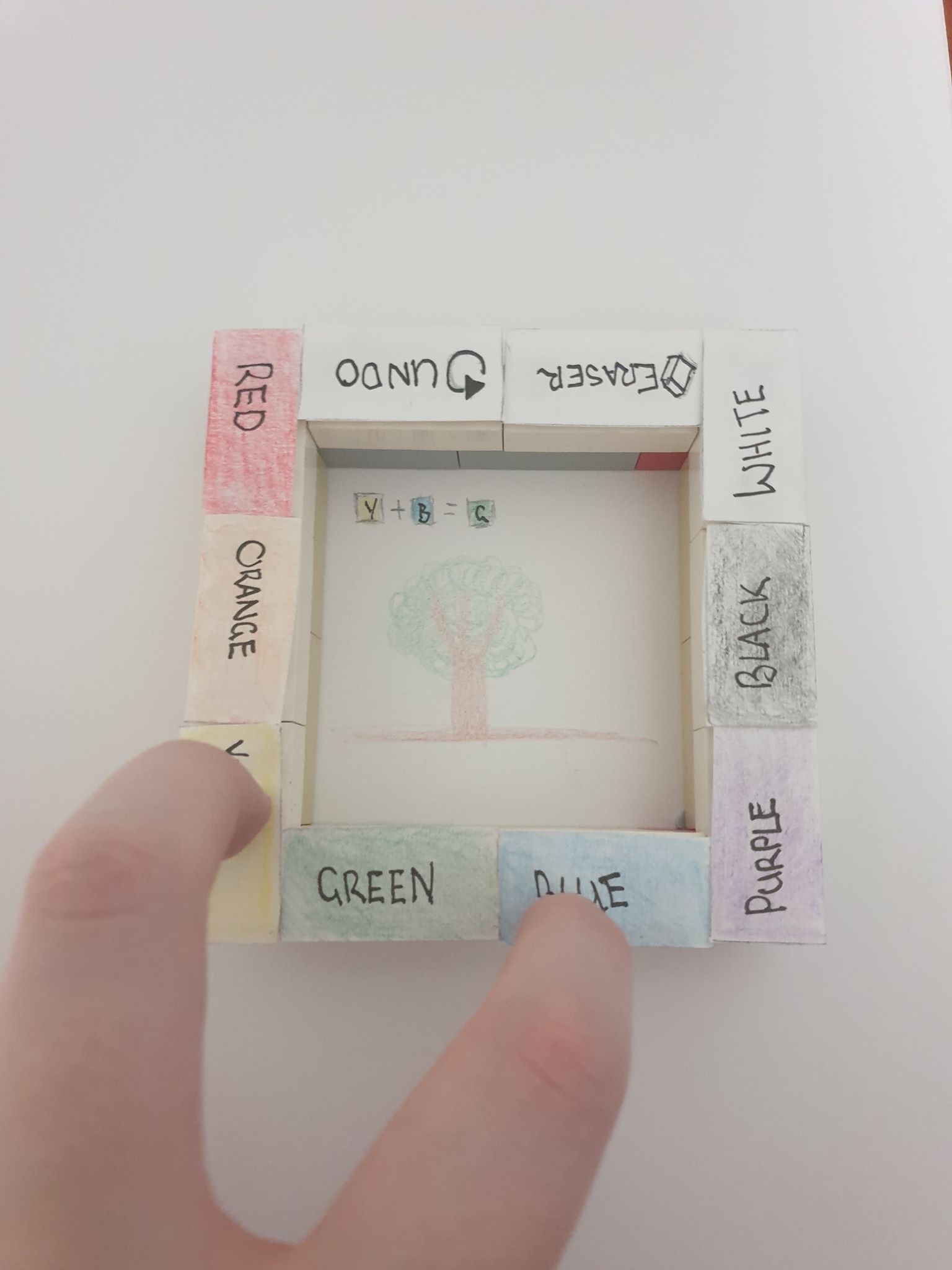 I want to eventually test my yoga mat and foam theory on my lego prototype. But first I need to get a yoga mat, sheet metal and some foam.

In the meantime, audio and Unity seems to be the way to go. Finding ideal and royalty free audio clips is proving to be more difficult than originally anticipated

My tarot cards came in the mail the other day!! I pulled a card at random today and got the sun - it means joy, success and positivity. So consider me inspired!! Good things are to come!! 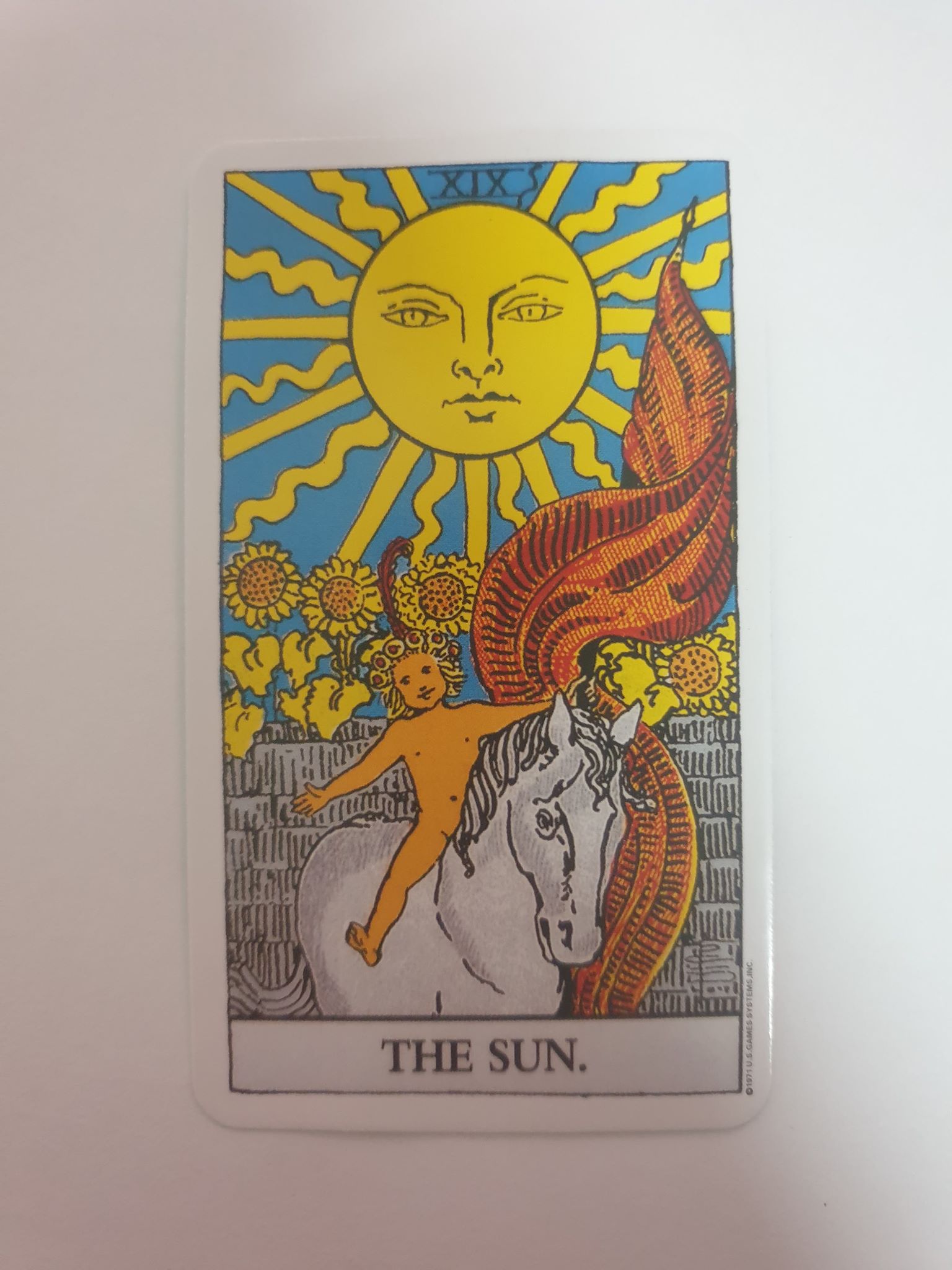 REFLECTION: Planning!! I love it!! This was so beneficial in the long run. I referred back to these diagrams a lot when building Mixed. Things like having one consistent ground and thinking about how my physical pressure buttons were going to work was really helpful later down the track. It would have been good to see a reflection or at least an update on my audio feedback - it seems like I abandoned that for a while. Fleshing out how my audio feedback was going to work, or at least if it was understandable would have been a lifesaver in later developmental stages.