I began building my digital interface in Unity. I set up a basic UI following this tutorial, since it’s been a while since I last used it. As a rundown of this past week, I’ve been jumping a bit all over the place. I mentioned previously that I was still struggling mentally at grasping things, but I think my anxiety built up to a point where I had to kick things off. I started by quickly setting up a capacitive touch circuit on my Arduino, and code I had used in DECO2300. It was easy to set up, but I quickly ran into strange problems. I thought my GND port was a bit dodgy, or if my wires were janky since it would not recognise the touch unless I held the wire in a certain way. I chose that I would work around it since I didn’t realise it was as bad as I initially thought it was - which I discovered a few days later. I was trying to work with the circuit again, switching out different wires, trying different GND ports, and I still kept having the same problem. I switched the code a bit so the LED would be on, and would dim if touch was recognised. I thought this might make it easier for me since I knew power was running through it, and any changes I make would be more evident to me. I then realised that it wasn’t detecting my touch at all, even when I held the wire the specific way that had worked previously. It was only when I asked my boyfriend to hold the wires for me so I could take photos of the build, that I made the discovery, that for some odd reason, the capacitive touch would only work if I was also touching the USB connection port with my other hand. It all made sense to me - when I was holding the GND wire in the specific position, I was resting my pinky lightly on the mental cable port, which is how it would sometimes work. I felt pretty stupid to be honest, and to make matters worse, I’d encountered a new issue that I perceived as potentially being dangerous. I sent pictures to a tutor for advice, and continued to look at different circuits that catered to multiple inputs.

Before the week started, I thought I would focus on the digital interface, however I think presenting the values isn’t currently as important as getting the visible components working. Thinking back now, I think I sidetracked a bit since I ended up trying to get audio working on the Arduino, and wasn't simultaneously working on the Unity audio output.

After my in-class report back, Alison suggested a glue gun, which I had been considering, and I didn’t realise how affordable they were until recently. I managed to grab the last one at Burleigh Officeworks, and extra glue sticks at Jaycar when I went to buy 3.3 Mega Ohm resistors for a new circuit. I'm yet to start using it. I also looked into the standard for Braille, and found a rather extensive document detailing the specifics of how Braille is to be done. It's much smaller than I had anticipated, but I plan to experiment with clay and glue, as I was unable to find small gems as Alison had also suggested.

I watched a video about a Youtuber called Molly Burke, who had night blindness and photophobia as a child, and whose conditioned worsened with age. She mentioned “pre-braille training” that involved feeling and identifying fabric materials and textures, and practising distinguishing them to ensure the person has enough finger sensitivity. Because of this, I considered perhaps applying some form of physical texture to the keys, to assist in identifying which key is being touched.

I found a tutorial on how to set up a touch piano, and I got the main set up built following this diagram. 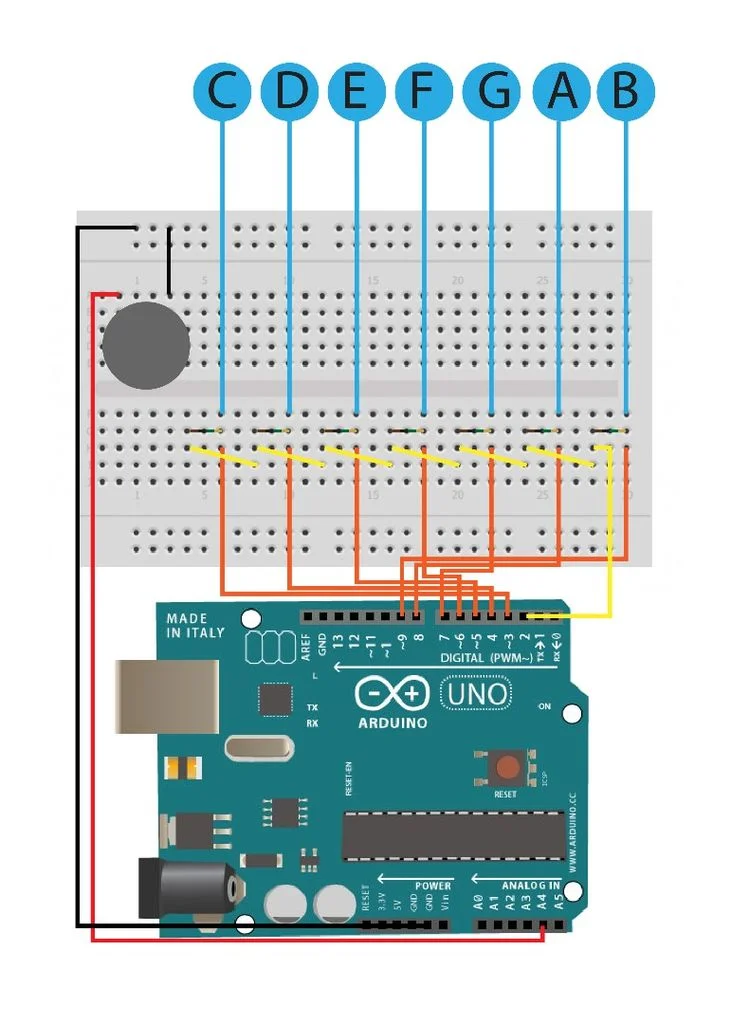 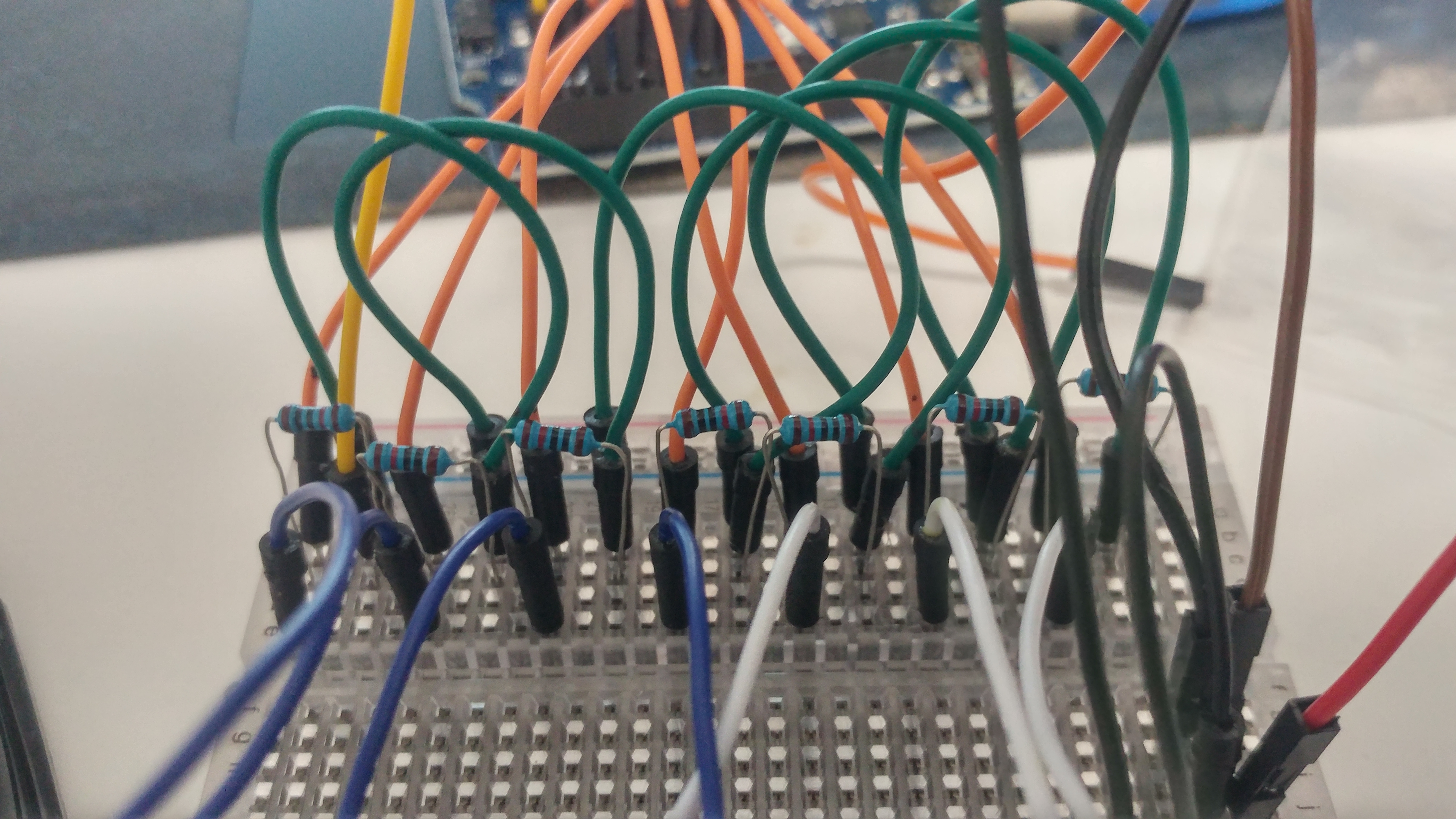 I got a bit stuck on connecting the piezo buzzer since the one on the diagram had two pins, but mine had three. It took a bit of pondering, but I remembered encountering a similar situation in DECO2300 with a soil moisture sensor, and was able to connect it to the 3.3V port to power it. To my disappointment, however, the code returned an incredibly unpleasant constant beeping sound from the piezo. I've since found a different code and set up to try out. When doing this current setup, however, I didn't have enough blue wires to have a consistent colour code, even with the aux kit, so I used some extensions I had previously bought, and created a nice little rainbow, which I might match to the corresponding keys. 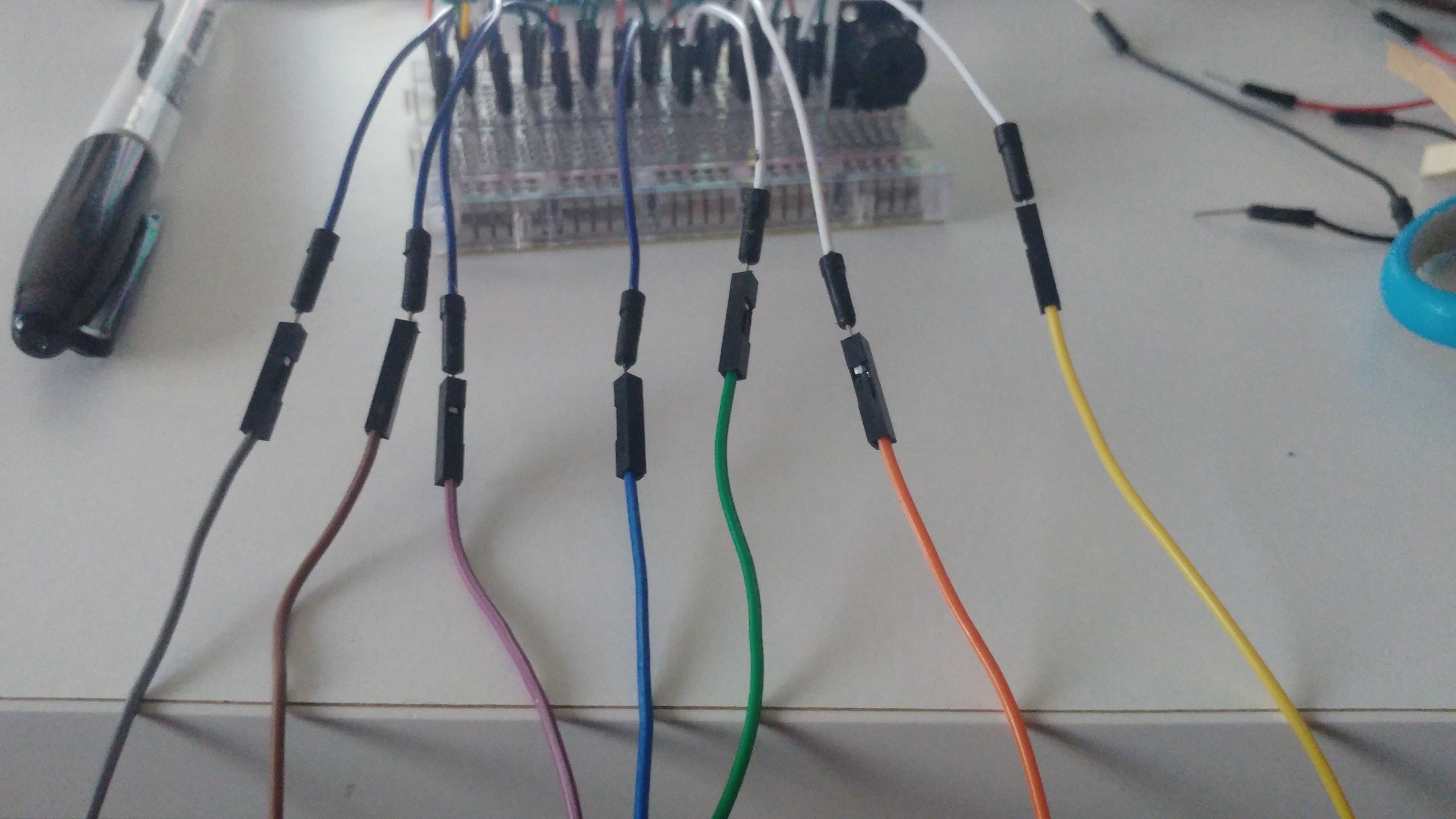