An online office observation was conducted this week, key works that relate to this domain was used to search something about office, such as ‘office workers’, ‘office’, and ‘office observation’. A number of useful sources are listed below:

https://www.youtube.com/watch?v=FAplyNf7uuE and some other videos

Based on these information, I made some changes to the concept mentioned in the previous journal

On the other hand, a design principle was searched and trying to implement it into my concept because the concept is designed for everyday life with playful and open-ended interactions. It might involve a series of interaction process, such as how the user explores, discovers, and adjusts it. So, it is important to ensure the user interacts with it without confusion. So, based on research, Valk, Bekker, and Eggen (2015) develop a model for playful interaction. It involves three stages, which are invitation stage, exploration stage, and immersion stage. The overall interaction process was checked and improved based on these three stages, and a number of improvement was made in the concept. For example, LEDs on the ring can easily get user’s attention and show the changes. So, they will be used to represent the changes of system state and interaction process. For example, all LEDs are activated means that the sitting time is long enough. Then, all LEDs will be turned off, and specific LED will be lighted up to tell the user the current step is completed, and to guide the user what to do next. Moreover, responses should be provided to the user every time when he/she tried an action so that the user is able to explore how to interact with the patches. For example, if touching the wrong patch, then the LEDs on the correct patch will keep flashing. Finally, while users are gathered together and interacting with each other, the provided responses from the patches should be similar and coherent in ongoing engagement. Specifically, the light’s color and brightness should be the same while passing it to other users.

In addition, I also started to construct the prototype for my concept. Two features were build. First one is to activate LEDs on the neo-pixel ring by pressing a paper. I formed an overall construction process for this feature:

Arrange the jumper lines on the board to make it more clear and structured.

A neo-pixel ring was simply placed on the board, and connecting to pin 2 for data input, ground, and power. After following the construction guidance online, a basic code to activate the ring was created. Then, I got a basic view of the ring: 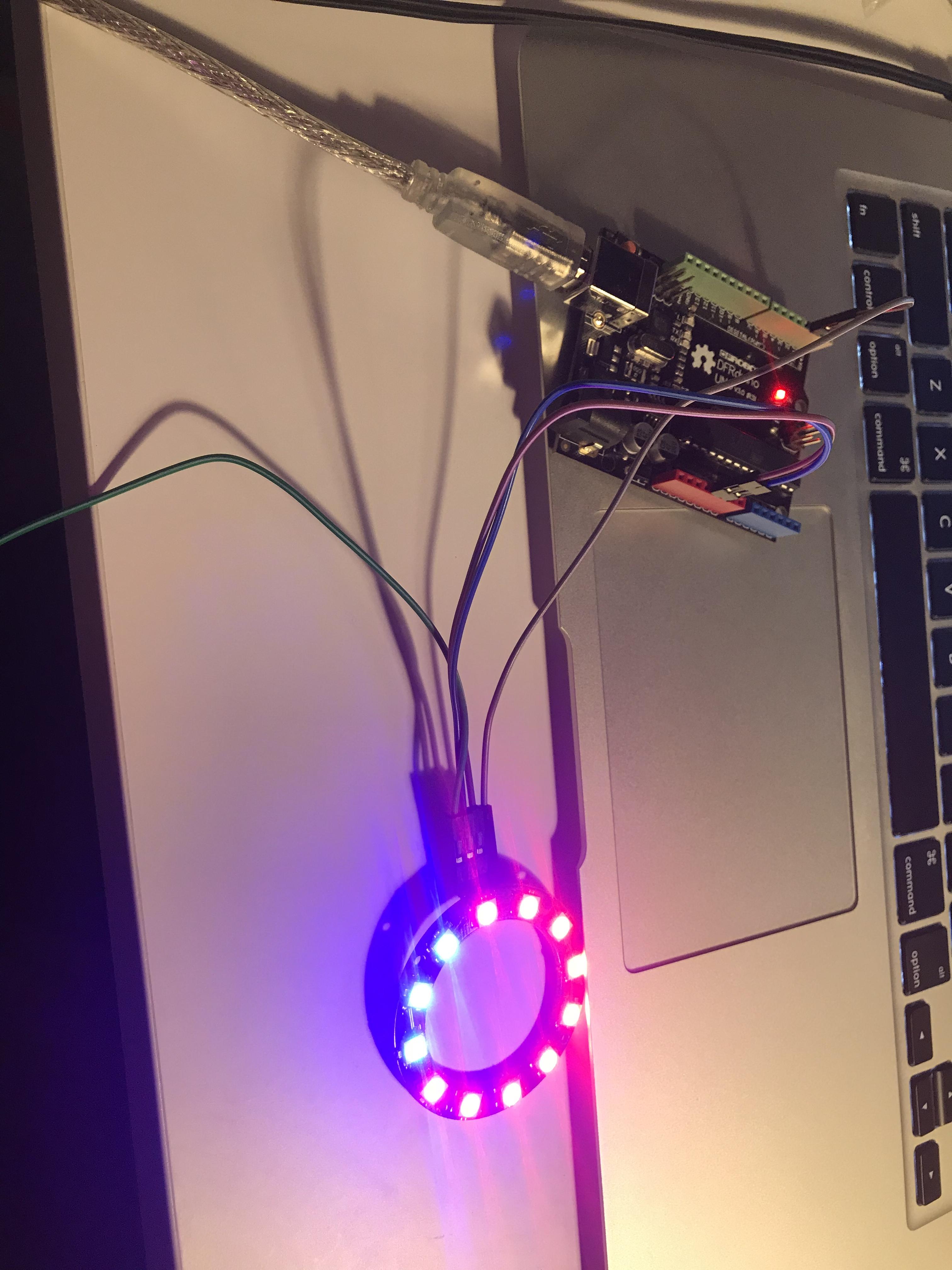 Then, through exploring the code, I am able to activate specific LEDs on the ring. 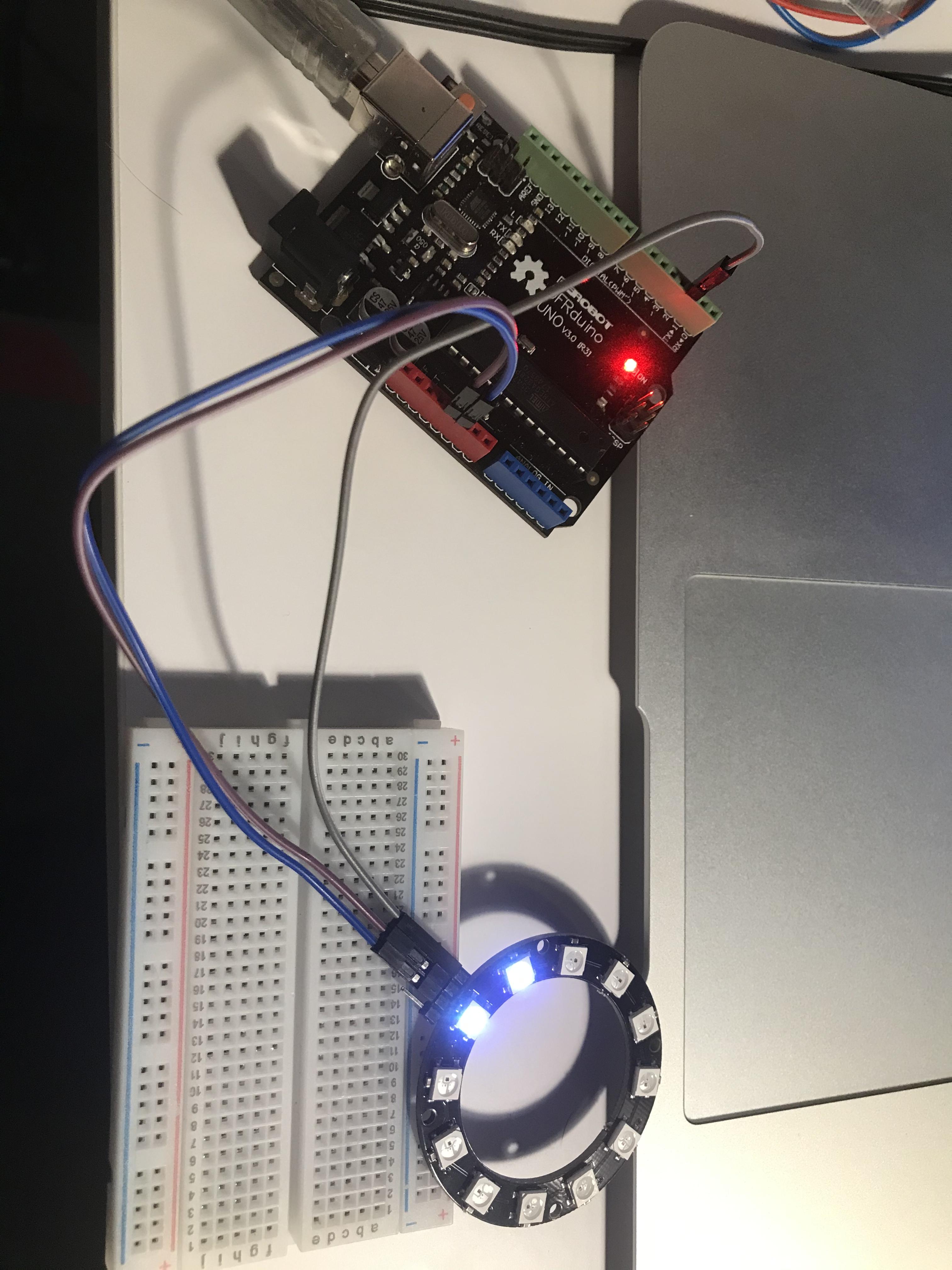 After that, I took a look the materials I got, and I found that the pressure sensor could be used to detect whether user is seated or not. After press or pinch the sensor, the value would be read in the system. So, I think it is really helpful for my feature, and I can activate the LEDs by comparing with the value from the sensor and a pre-set value. Then, it is possible to detect whether the user is seating or standing, and activate the LEDs. After that, I combine the functions I created with the pressure sensor, so the point 5 is fulfilled. 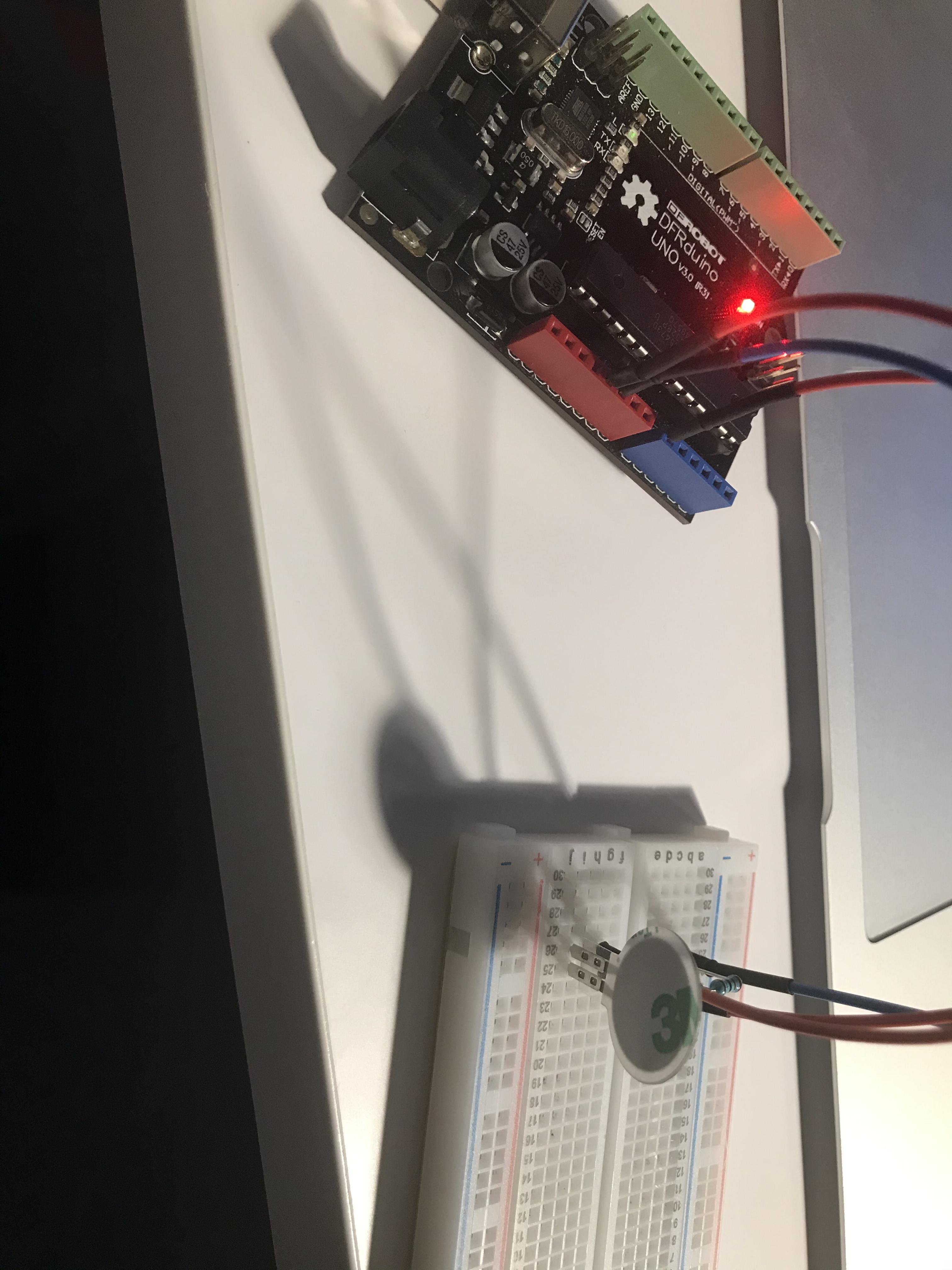 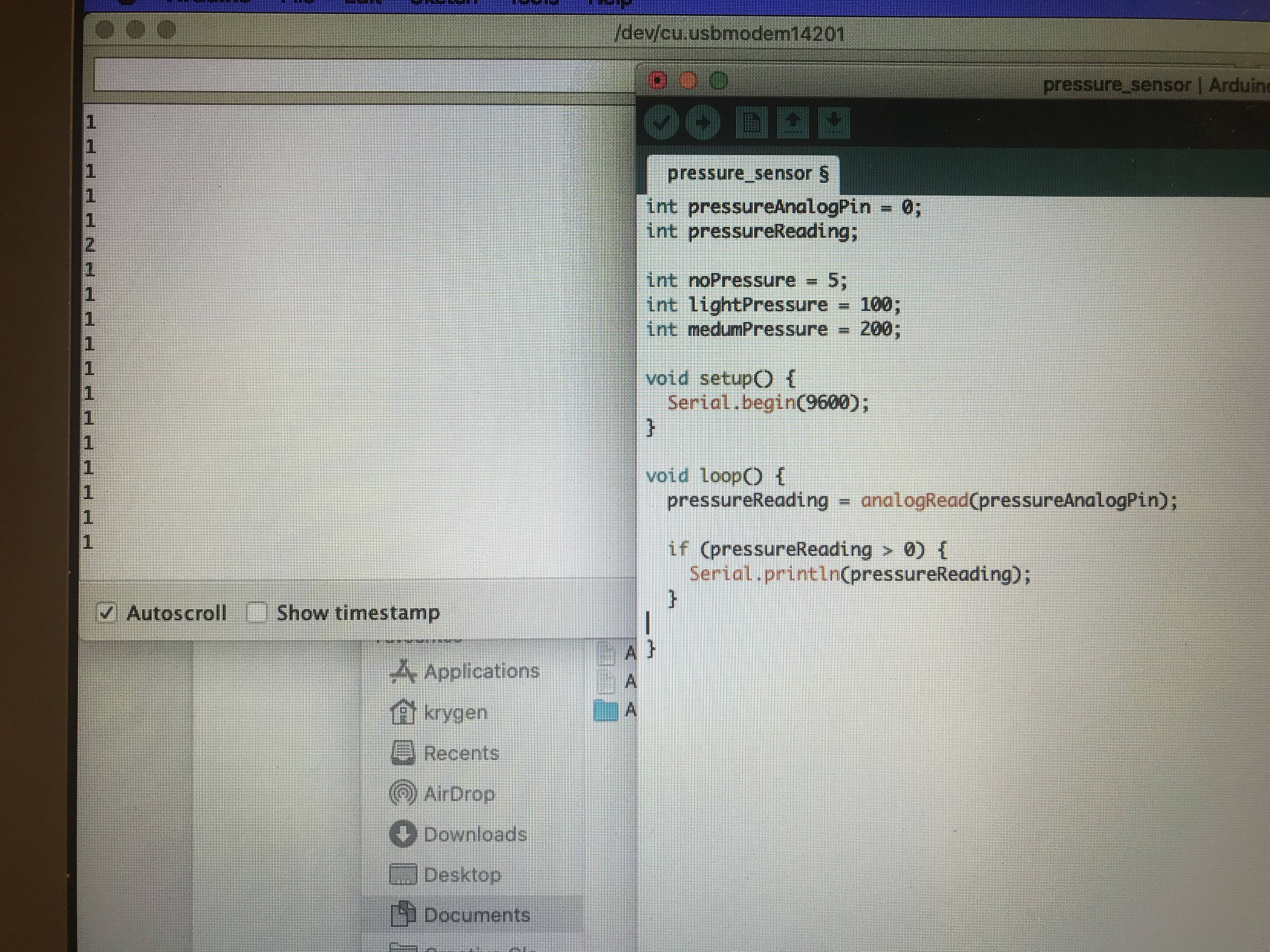 Next, I used ‘delay()’ method to freeze the whole system for a specific time so that it is possible to activate one LED every few minutes. However, it caused a problem that nothing can be conducted during freezing the system, so if the user stands up during freezing, then I am not able to detect it through the pressure sensor. I have read through some projects, and I found that using two variables to track and count the time is a more flexible and efficient way to solve this problem. As the figure below:

Finally, I combine everything together, and create this feature: 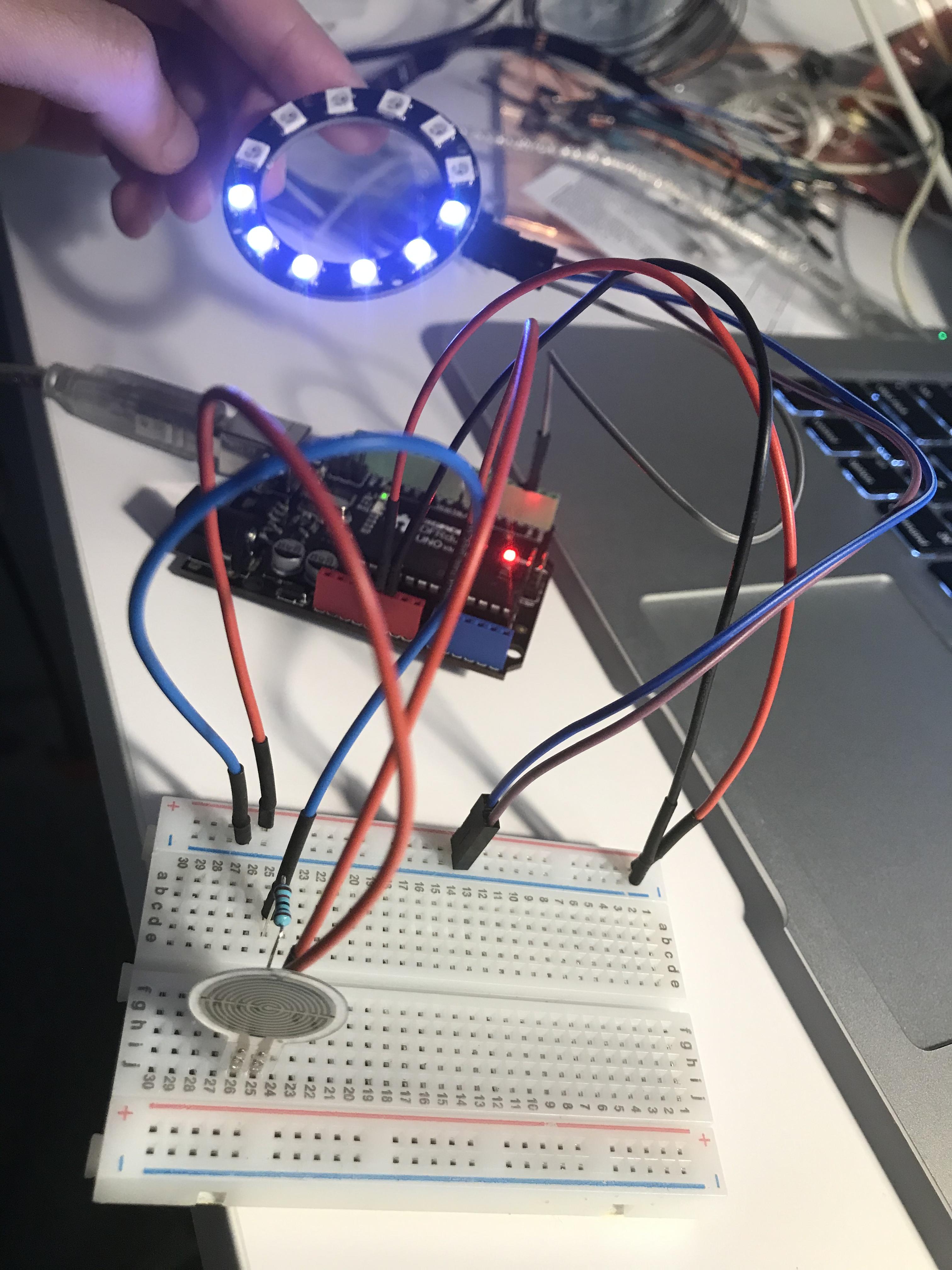 I simply tested this feature by pressing the pressure sensor, and the LEDs are activated every specific time, so it was successful. Then, I rearrange the jumper lines, sensor, and led to make it more clear: 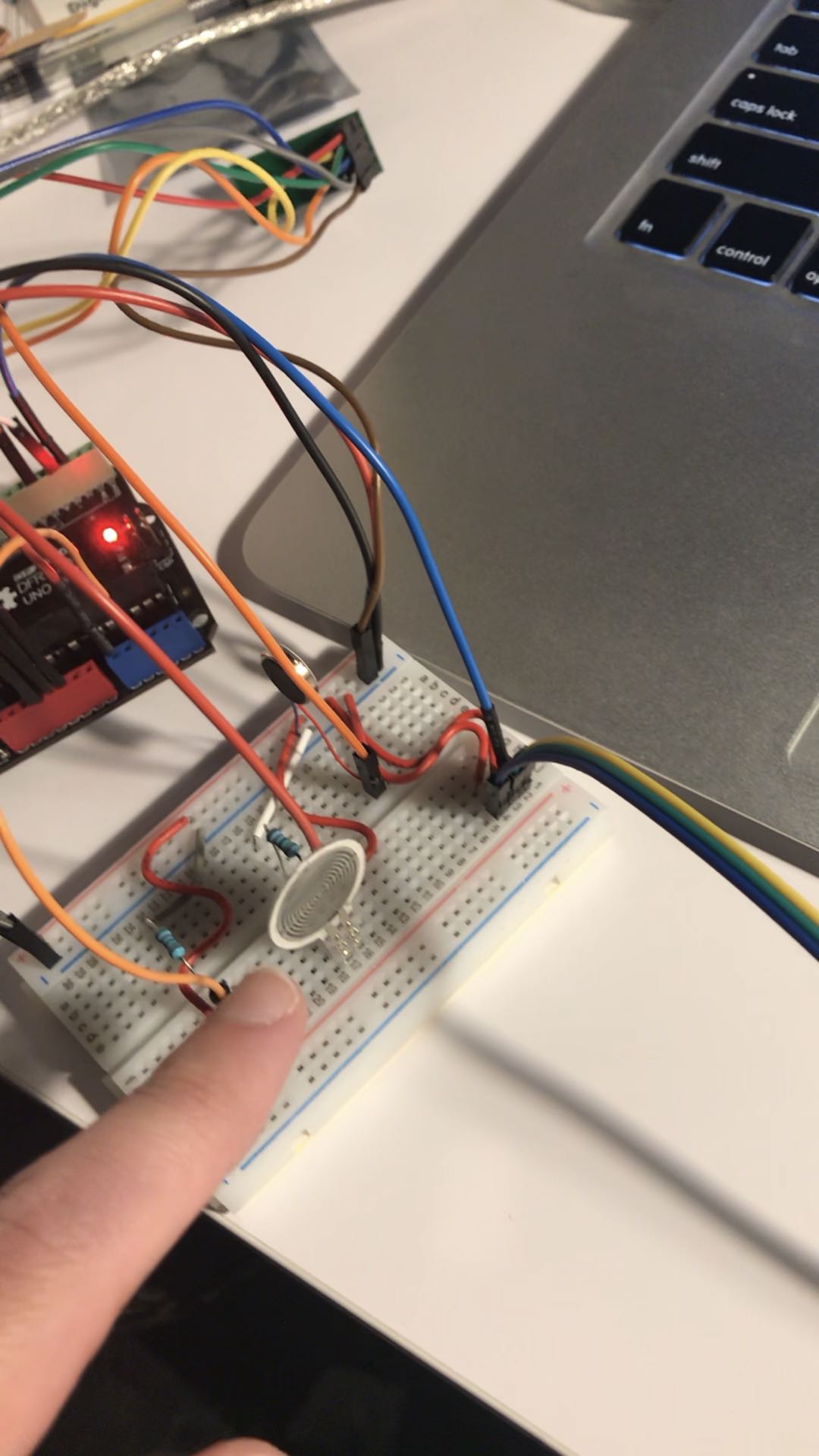 Things need to be done

Based on the concept, a number of features need to be constructed in order to form a prototype, which are code improve, vibrating function, construct another device, and data communication between two devices. I will work on them at the end of this weekend and next week as well. By the way, the appearance of the prototype also needs to be improved.

According to this source, I learned the basic structure of the neo-pixel ring and its code. For example, through calling Adafruit_NeoPixel to activate the overall functions of neo-pixel ring. Moreover, through calling begin, clear, and show to control the LEDs. Also, the combination of these methods can easily turn off and on the ring, which is quite helpful to solve what I have struggled in the feature. For example, I could not turn off all LEDs at one time, so I turned off them one by one. However, after I have read through this documents, I found out that the combination such as clear() and show() can just quickly and simply deactivate all of them.