Beginning the week with World Cafe was quite exciting. I had already done a form of this in DECO3500 and quite enjoyed the activity, so it was great to be able to do this again with a variety of different topics. In my previous journal post I listed some of the themes that I was interested in exploring, so this activity gave me a chance to do that, as well as meet more people in the class.

The topics that I had a chance to explore were Change Through Discomfort, Change Through Positive Reinforcement, Emotional Totems, Sassy Tech, Bothersome Tech and Creative Learning. Throughout this activity I hosted twice, which was exciting however it would have been nice to see some other people step up to host so that I could explore one last topic. In saying that though, it did allow me to take on a slight leadership role, which is something that I have been trying to improve upon. 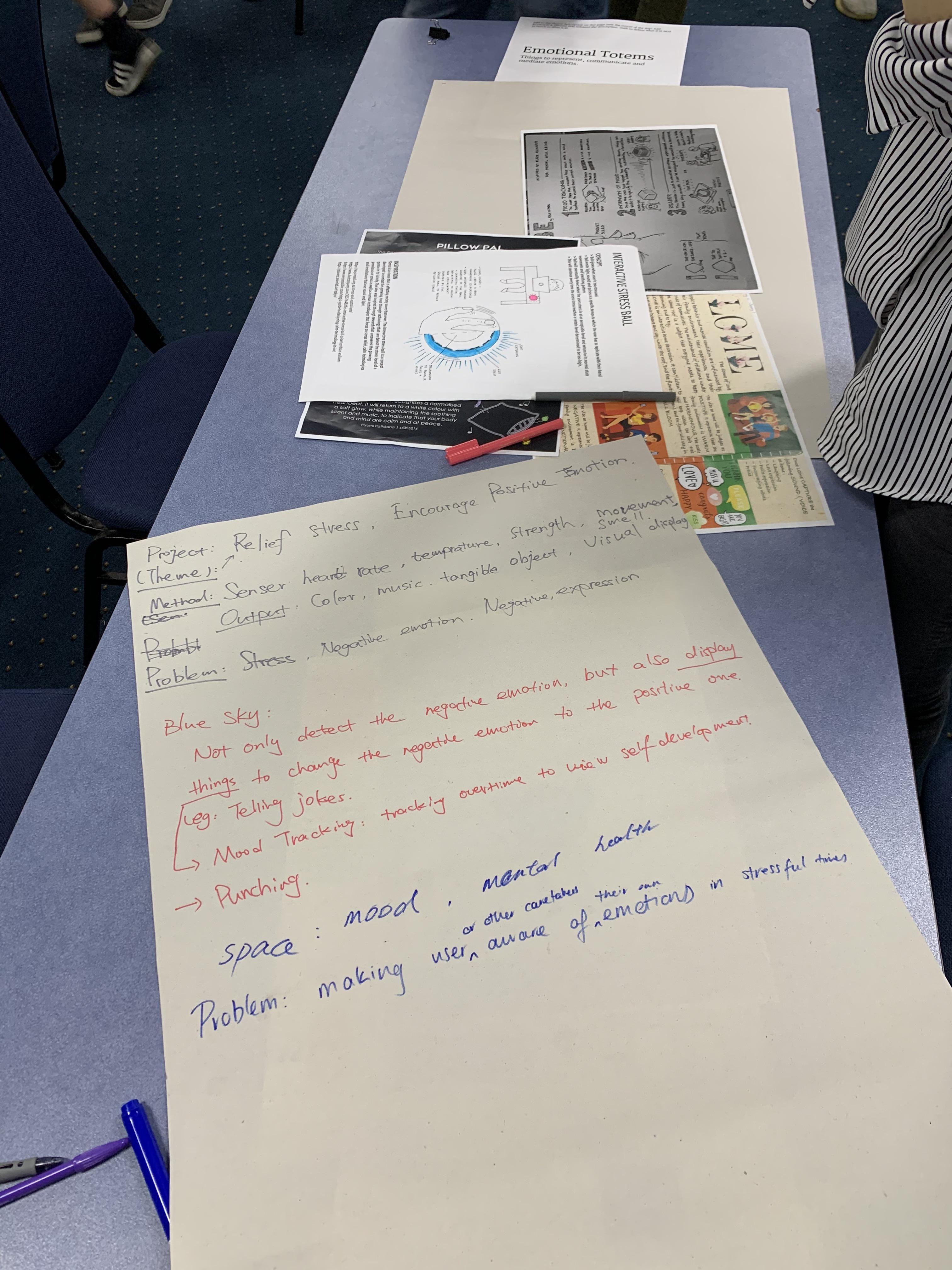 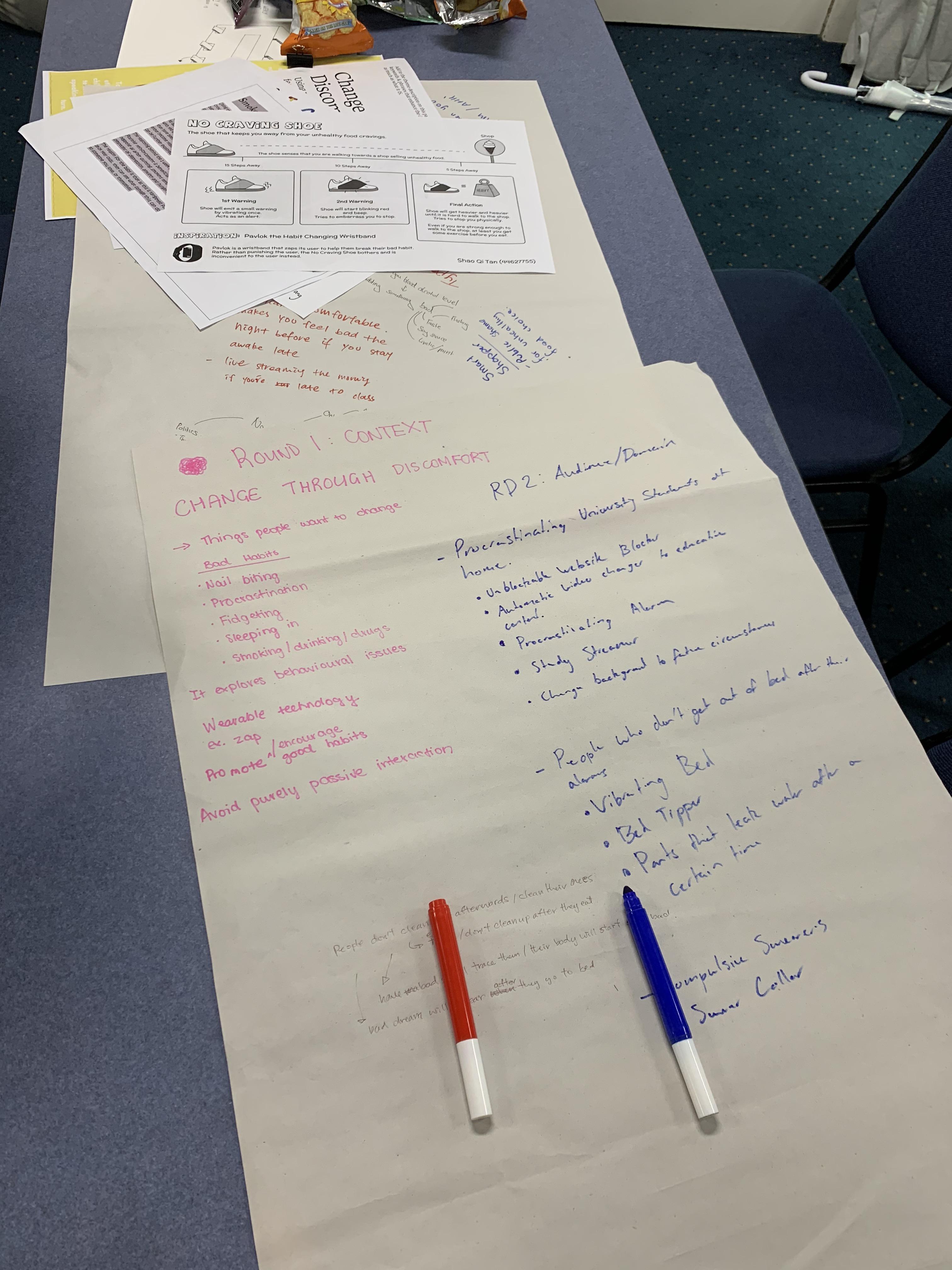 After exploring these topics and brainstorming some weird and wacky ideas, the top four topics that really intrigued me were Change Through Discomfort, Change Through Positive Reinforcement, Sassy Tech and Bothersome Tech. I definitely think the themes that I'm interested in overlap in some way which I found quite interesting.

To continue the week, former UQ graduate Bash Isai, chatted to the cohort online all the way from London. It was really interesting to hear his experiences and he gave us some valuable tips on how to get a job. I had come across the idea of job recruiters as my partner has one of his own but I didn't realise how easy and useful they could be. I definitely am going to be looking into finding myself a recruitment agent!

He also conducted this insightful activity which began with us writing 50 words about ourself, and then continuously cutting it down until we had three words. From those three we had to select the one that best represented us. The three that I ended with were unique, genuine and exceptional, however I thought that genuine was the word that best encompassed myself and my attitude as a whole.

It was finally the day to meet the team! I'm happy with my team as I've never had the opportunity to work with any of them and so far it seems like we've been getting along well. We do all struggle a bit with programming though so that should be quite interesting, although we've made an agreement to work on any kind of programming bits together. I got my first preference of Change Through Discomfort which is awesome, meaning that I'm excited to get into the course!

We dived straight in, coming up with a team name (Negative Nancies) and listing out potential bad habits to explore. Through this process, we placed a tick next to ideas that we thought would be interesting to pursue as they seemed more suitable for the semester project. 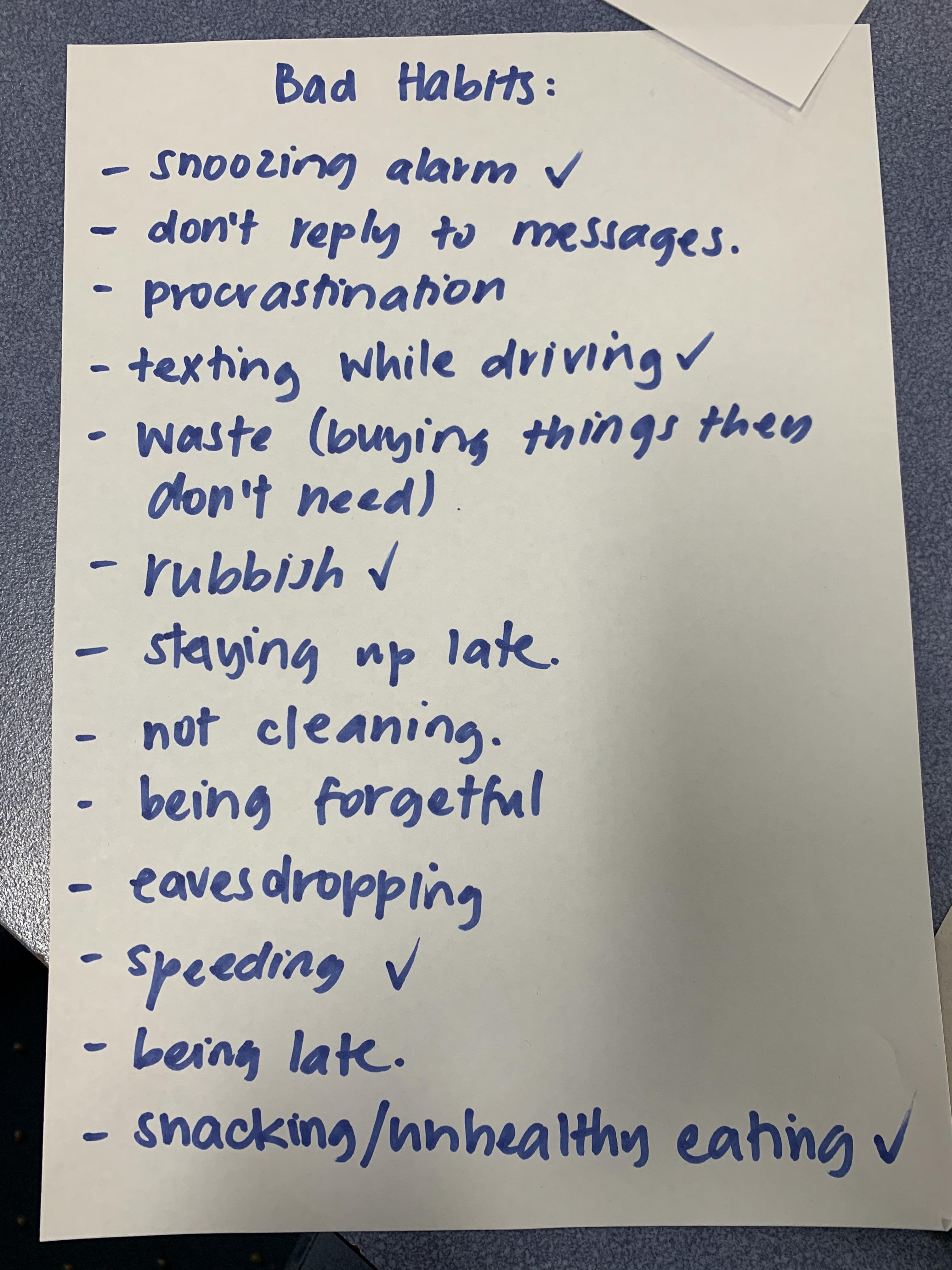 We further pursued some of these ideas, exploring potential interactions that could be possible ideas to target throughout the course. As we brainstormed, the topic of implementing discomfort towards sitting down for too long looked promising. We brainstormed quite a few fun ideas for it, so it's looking like this may be what we decide to explore! We currently haven't decided upon what characteristics we want to implement in the chair, but with the next assessable coming up in less than next week, we should have a drafted idea soon! 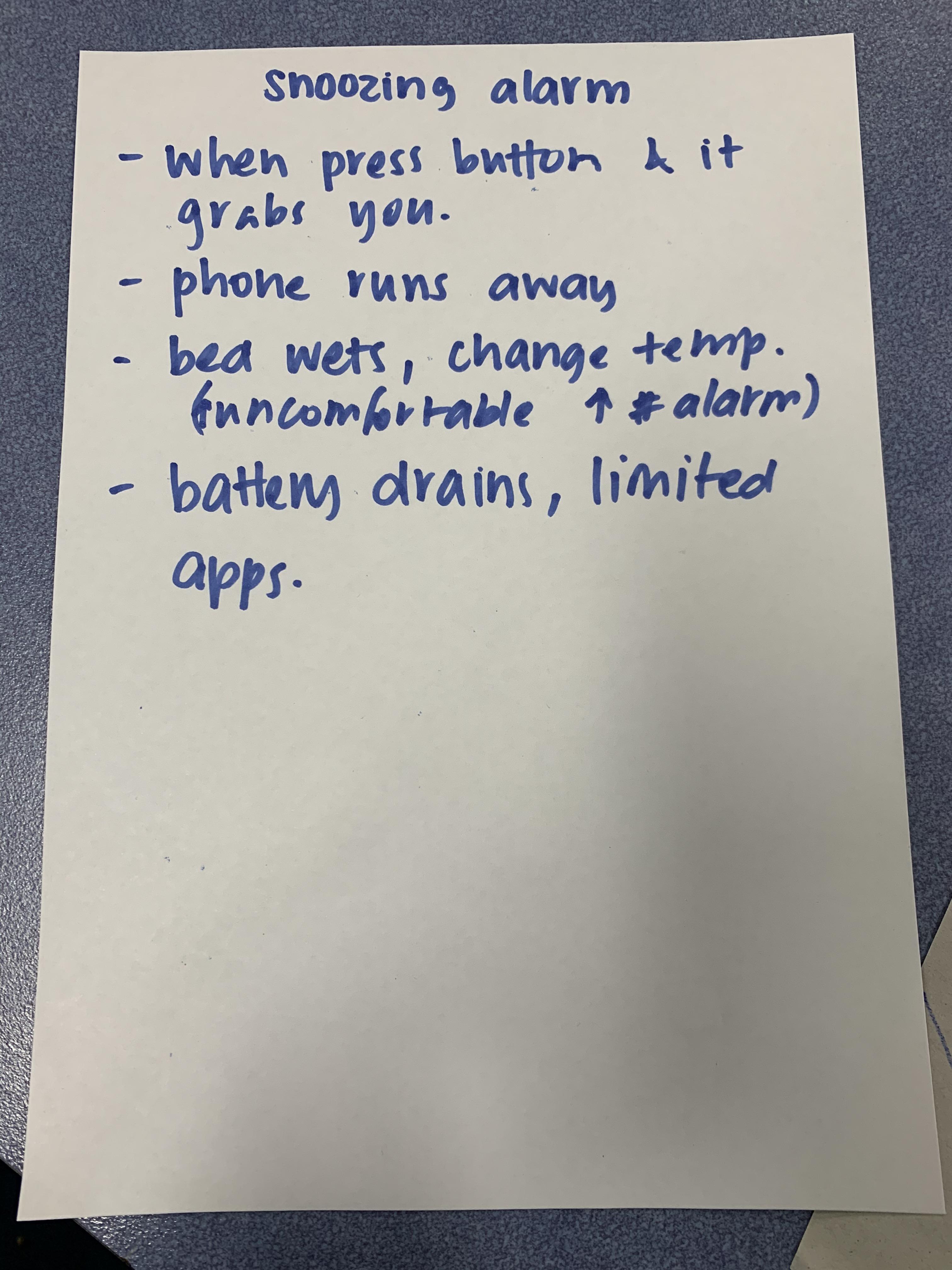 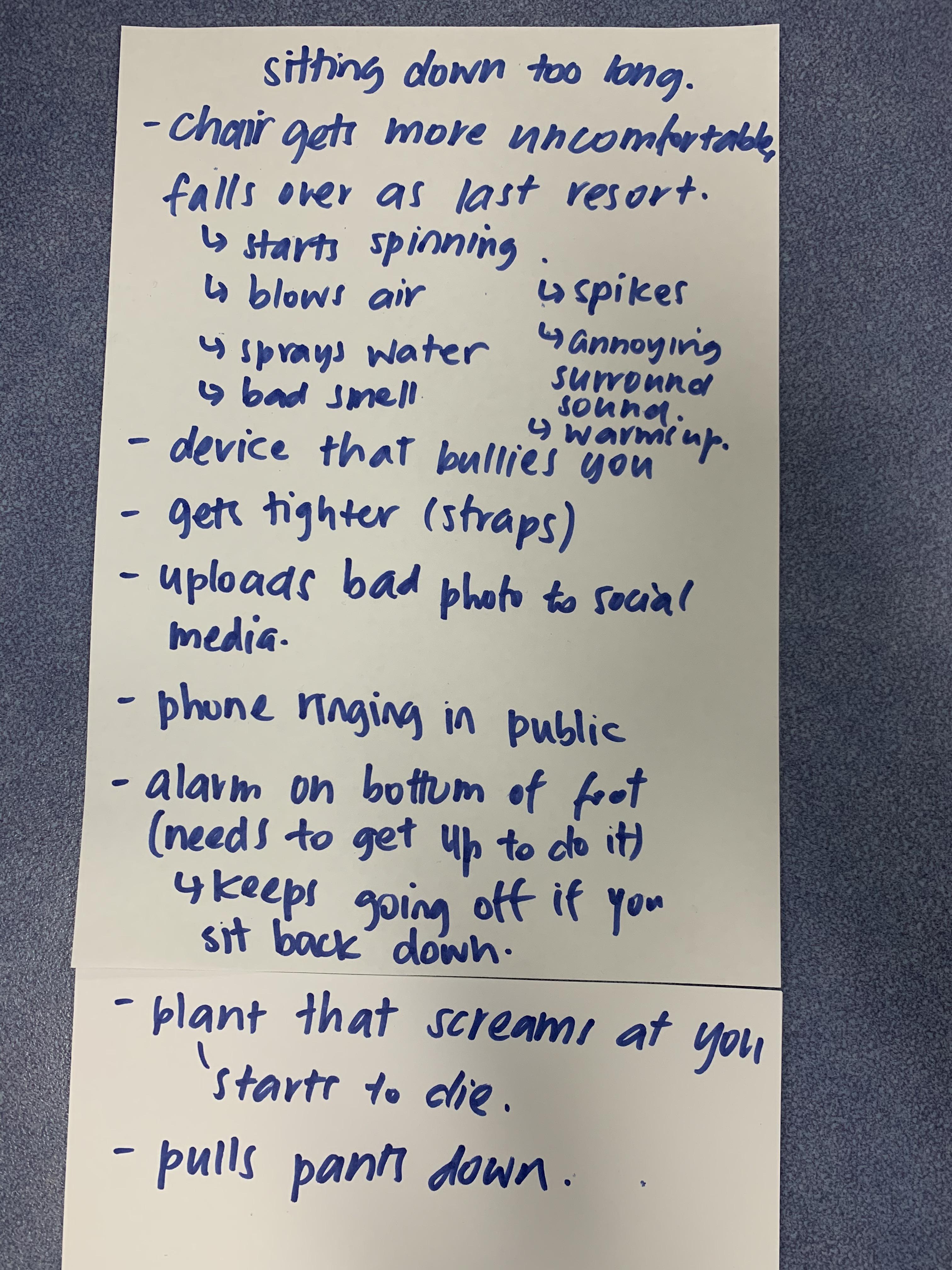