This week resulted in the cohort presenting an array of unique and playful ideas using open ended interactions in everyday life. It was quite interesting to see the different modes through which classmates selected to host their concept as well as the varying themes that people decided to tackle. Together as a group, the class collectively went through all the ideas before coming up with general categories. Below are the ideas sorted into categories: 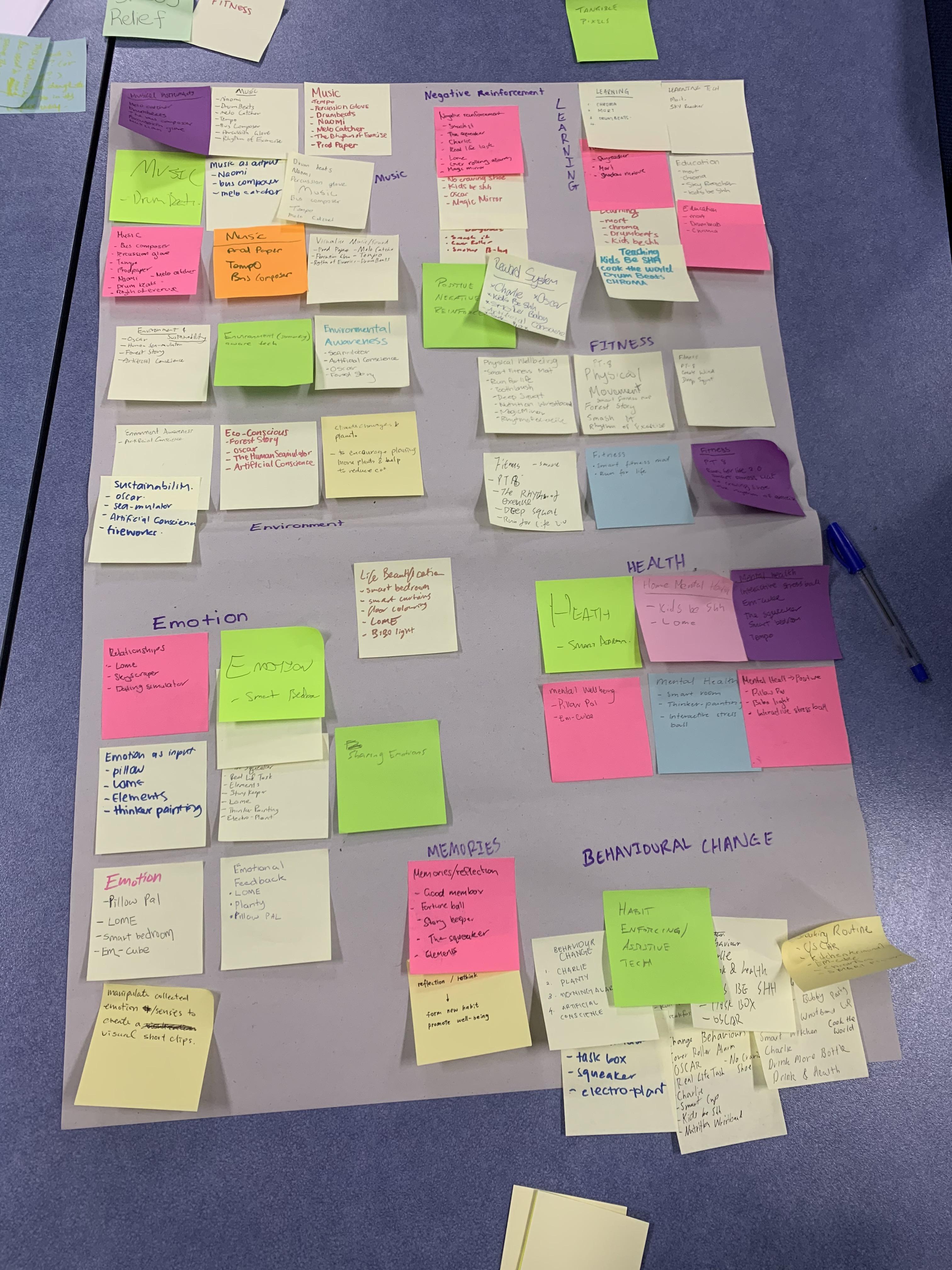 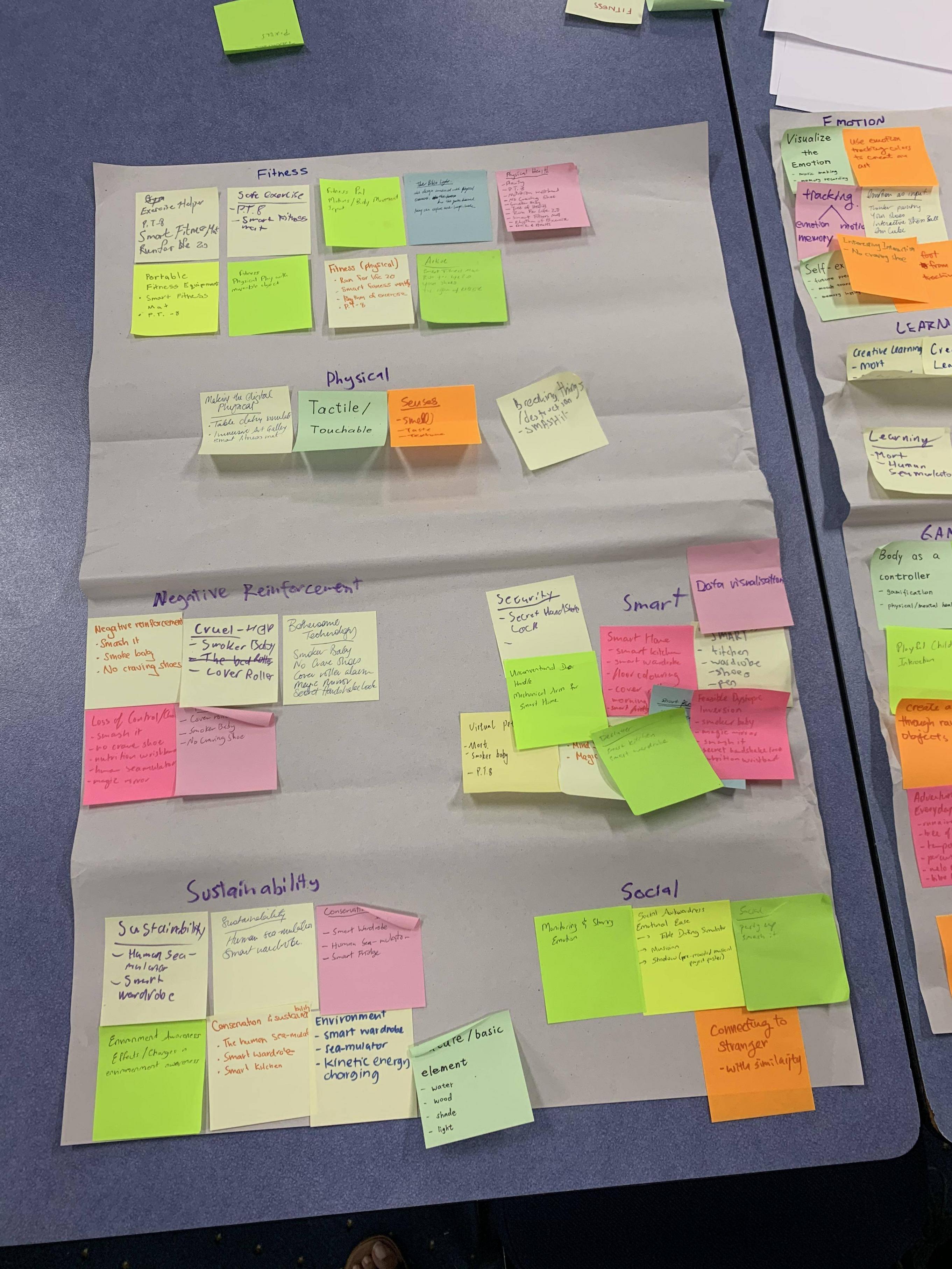 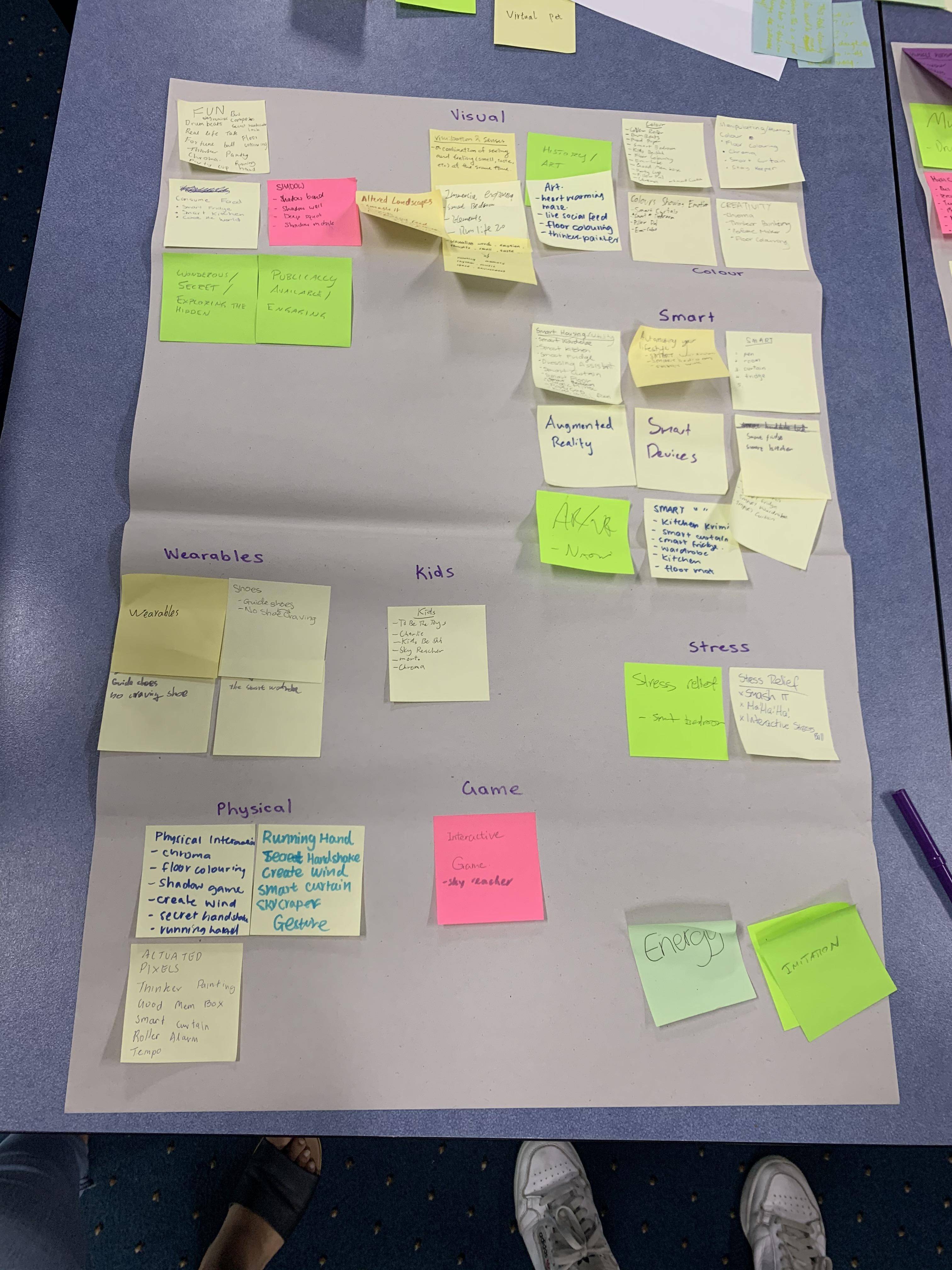 This method of collecting ideas and categorising them is quite efficient and a great way to see a variety of ideas and their similarities. For future, this may be method that I adopt when generating ideas for the course.

From these ideas, the cohort further explored categorising some of the potential ideas into interesting themes that can be used for the semester project. The following ideas were brainstormed: 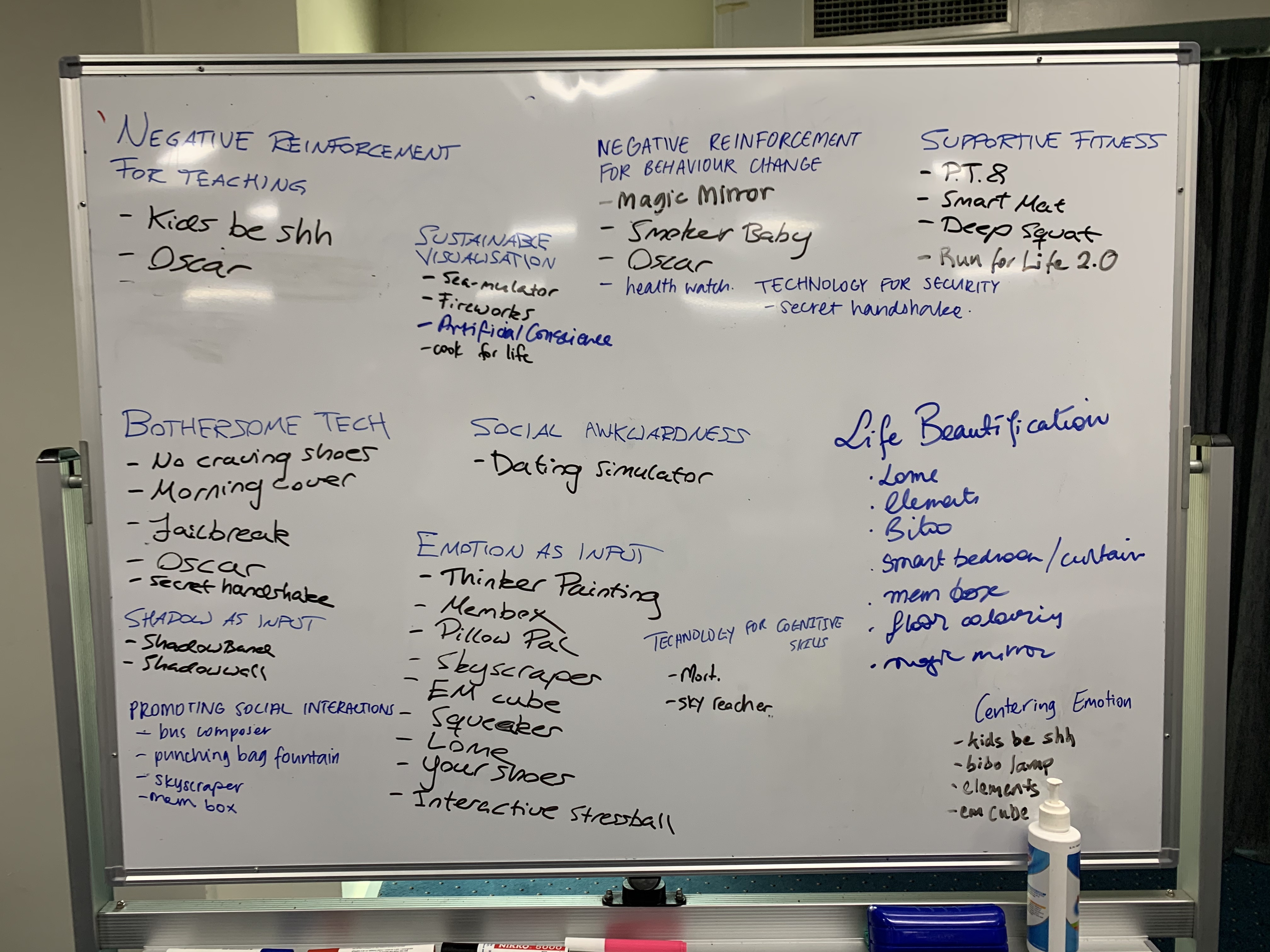 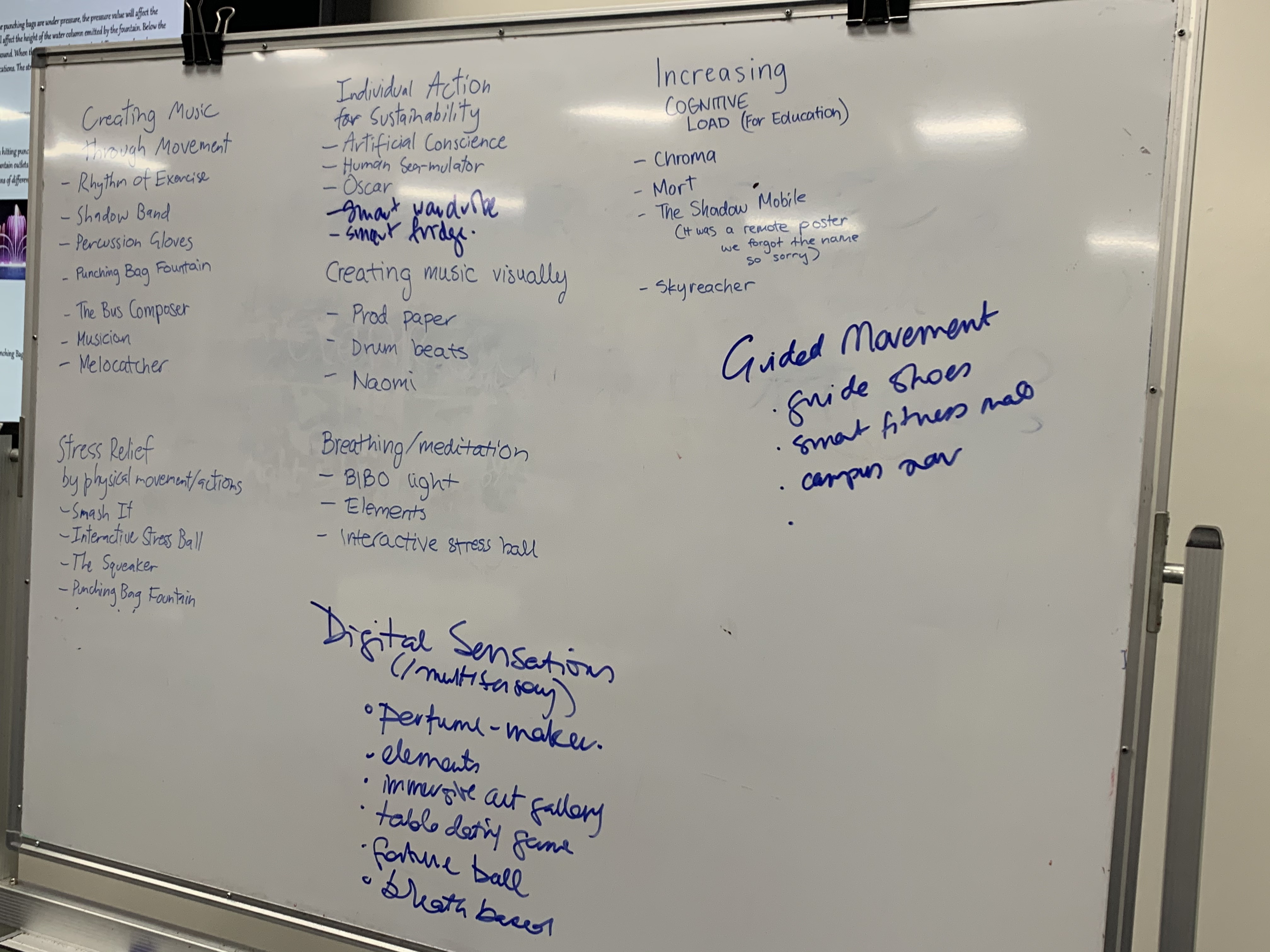 A final list was compiled outlining a total of 17 themes to explore.

Concepts That Intrigued Me

Some of the ideas that drew me included the themes of education and music. In particular two ideas stood out to me, the first being mort. the toy for children to learn morse code, and The Bus Composer, which allows bus riders to listen to and create music on the bus for their own ears. I thought the context of these ideas was very practical yet exciting, unique and suitable, which I think is why they stood out to me. Having a project at the end of this semester that ticks those four criteria would definitely be a great outcome for me!

Some of the themes that I would be interested in exploring within the 17 themes that were brainstormed include Beautify The Self, Change Through Discomfort, Musical Things, Emotional Totems, Bothersome Tech and Body As Controller. I think it will be interesting to explore some of the annoying aspects of tech, as well as concepts that are about ones self. I've always thought mental health is a really strong concept and it is a theme that I used last semester in a different course which is why I also have an interest for it.

Reflection On My Concept

I was excited to see a generally good response from my peers based on my concept of the Pillow Pal. One interesting comment that I was given was the possibility of being able to select the scent that one enjoys, as it was mentioned that some people may be irritated by certain smells. This idea of personalisation to a person also inspires me to potentially think about how this could be incorporated within my potential future project. Unfortunately this was the only suggestive feedback that I was provided so I have struggled to think of other ways to better the pillow concept currently.

Additional feedback commended my concept on allowing the user to be able to resonate their emotions for a while. I think being able to resonate with an object in an emotional sense is quite an important aspect, regardless of whether the object is specifically catered to emotional control or not. Hence, the idea of a user being able to somehow have an emotional attachment to a concept is something that I ideally hope the project that I undertake this semester will do.

Overall I think my presentation was clear and effective (although I definitely think I spoke quite fast due to nerves!) and my idea seems to be novel and relevant. I definitely think there is room for improvement and perhaps this may not be a project that I will choose to take on during this semester, just because I feel as though it lacks a bit of depth. However I definitely am proud of myself for coming up with a new and innovative idea that hardly overlapped with any other ideas!