On Wednesday’s interview with Bash Isai, we get some useful suggestion about the employment. I'm very touched by his words because I did an internship in a large domestic company during the summer vacation, and I did find the difference between a large company and a small company. In my opinion, the division of labor systems of large companies is more rigorous, but it also leads to very low processing efficiency of some projects. In this regard, I think that small companies do better, but at the same time, it is difficult for small companies to reach some large projects. specification. As an interaction designer, I found that communication with colleagues in various departments is very important. If this is not done well, it may lead to a lot of duplicate work.

On the 15-word part, I write “I’m unique because I’m a designer”. Compared to others, I wrote more general, but I think this is the confidence a designer should have. Afterward, I know I should think of something specific. This session really deepened our clear understanding of our advantages. “I need to find what makes me unique” is a useful sentence.” Don’t be afraid of failure” give me the motivation for carrying out our selected project. I think we can figure it out even we even if we still have some technical doubts.

On Tuesday, we learned a lot of new ideas and came up with a new idea based on all the posters on the table. Here are the ideas and inspirations we get on different tables.

Fitness blankets that guide people to do the right moves. This blanket is made up of many small squares. When people do dangerous moves, they will stretch out the small squares to support them. This auxiliary behavior gave me some inspiration, maybe I can use this mechanism for other operations. At the time, I thought, maybe we can make the barrier-free ramps portable so that in any case, people don't have to worry about the obstacles of the steps. 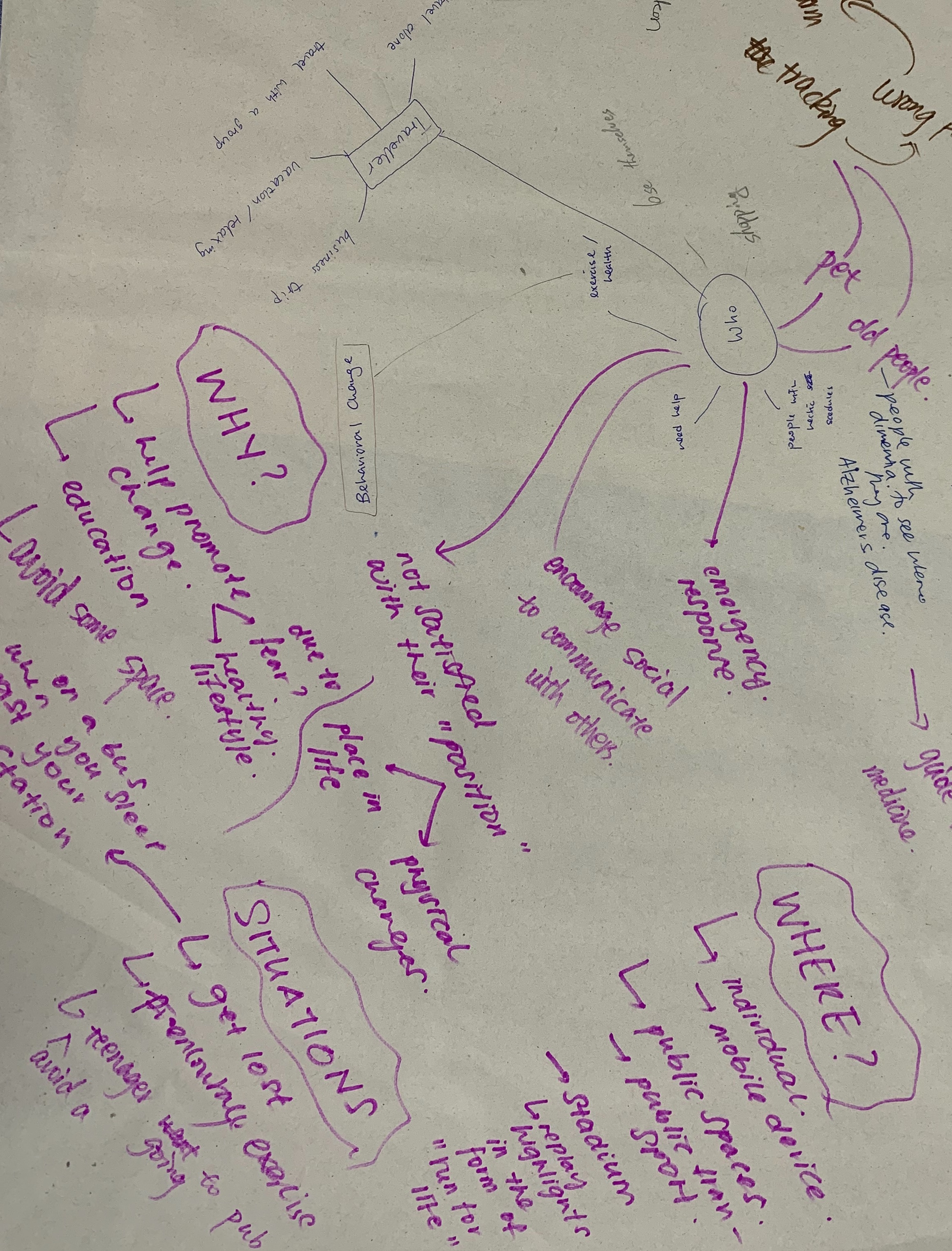 The door shaking hands impressed me. But I think its interaction is not enough. Maybe it can also set some error penalties to play the anti-theft function, such as getting a hot or slight electric shock when the wrong fingerprint is detected after entering the wrong password. 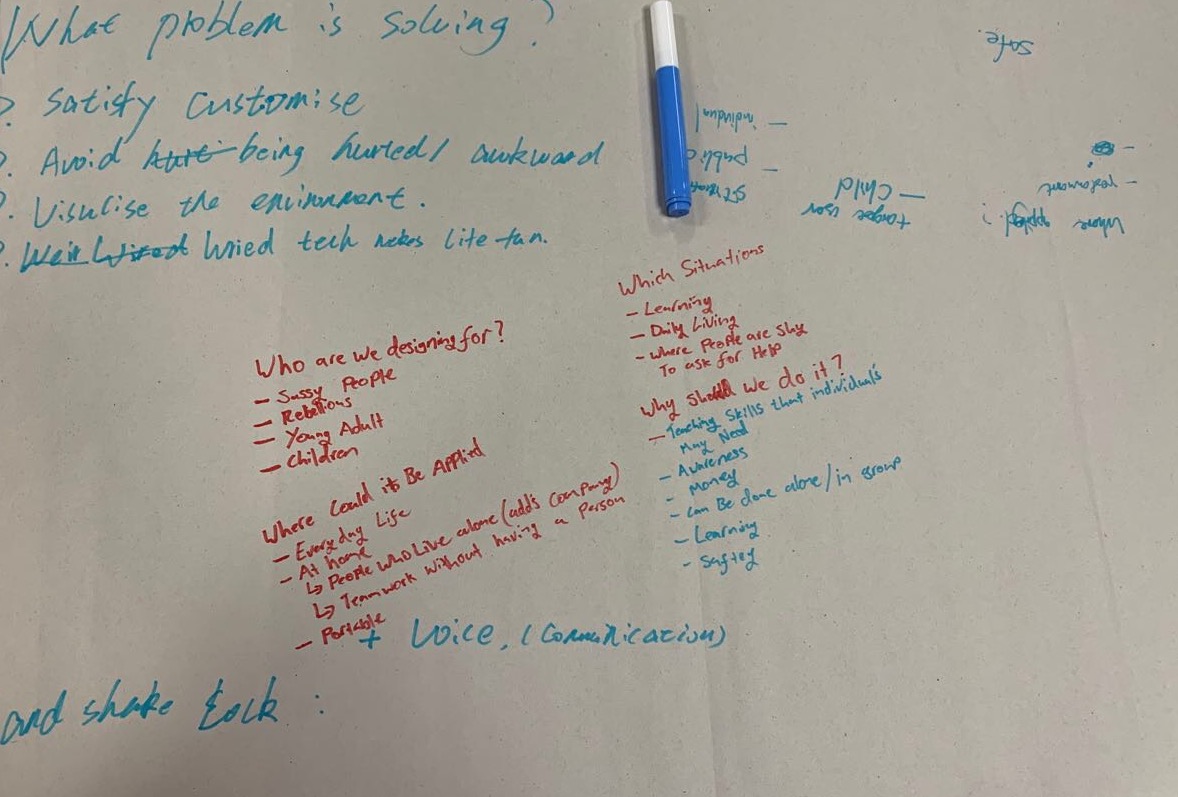 The one we discuss the most is a poster is Zatoichi, a blindfolded game. We think the idea is interesting but the game may be boring. We suggest adding more actions and more weapons to the game. For example, the weapon can be shield, sword, knife or ax. The voice could be different because of the distance. In addition, it can set online PVP mode. The player can rotate on a rotating chassis to attack the enemy around them. 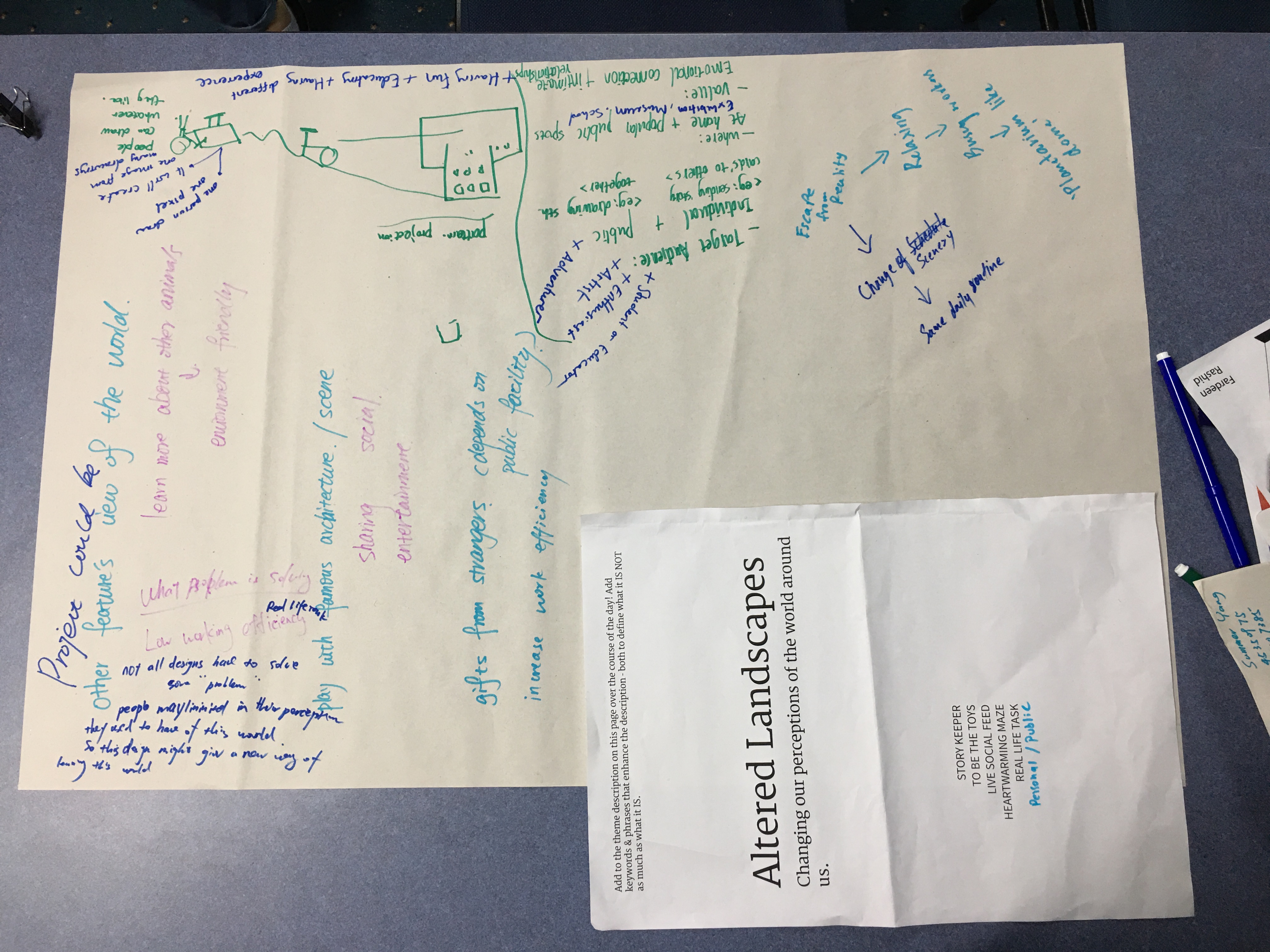 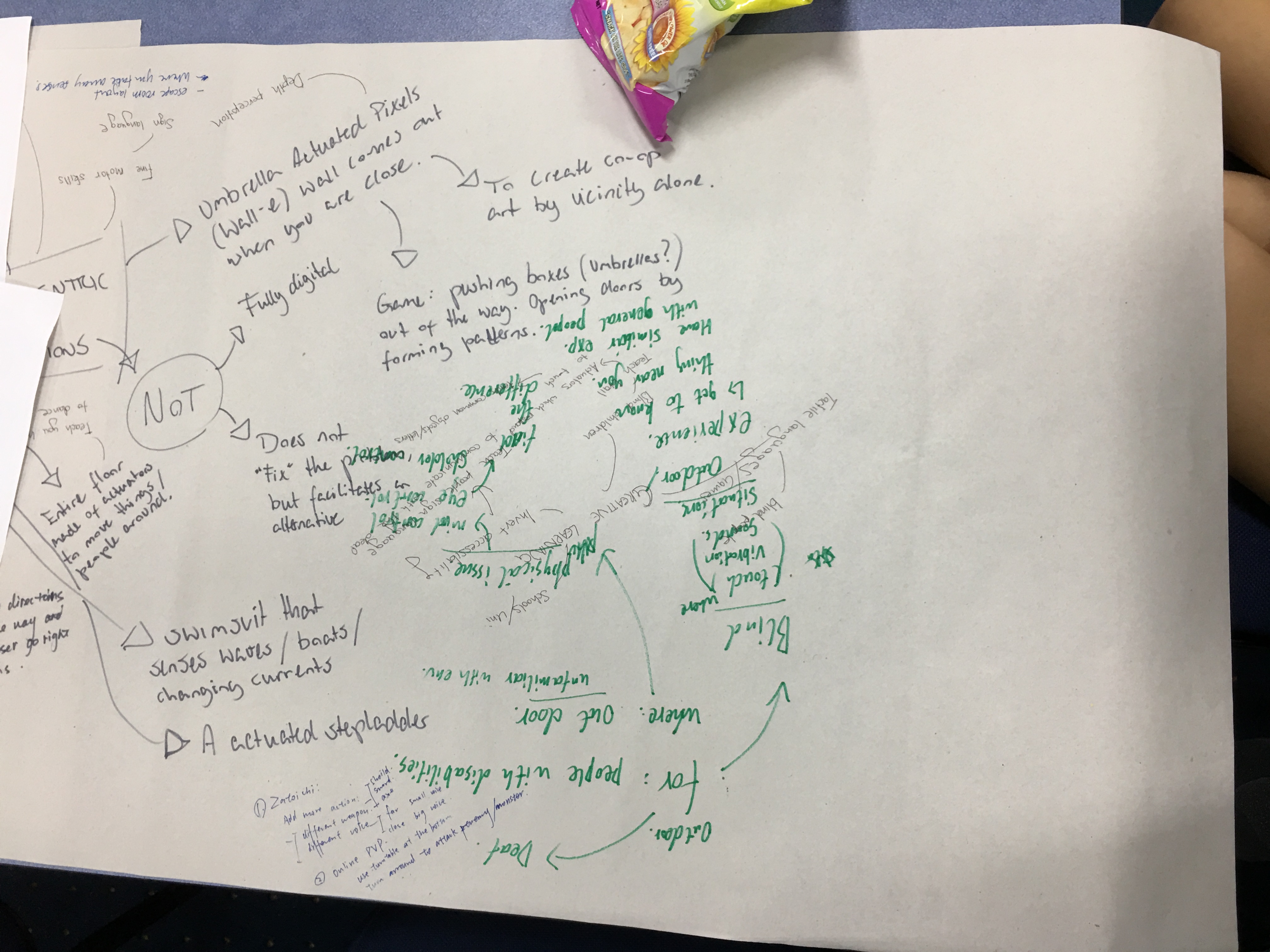 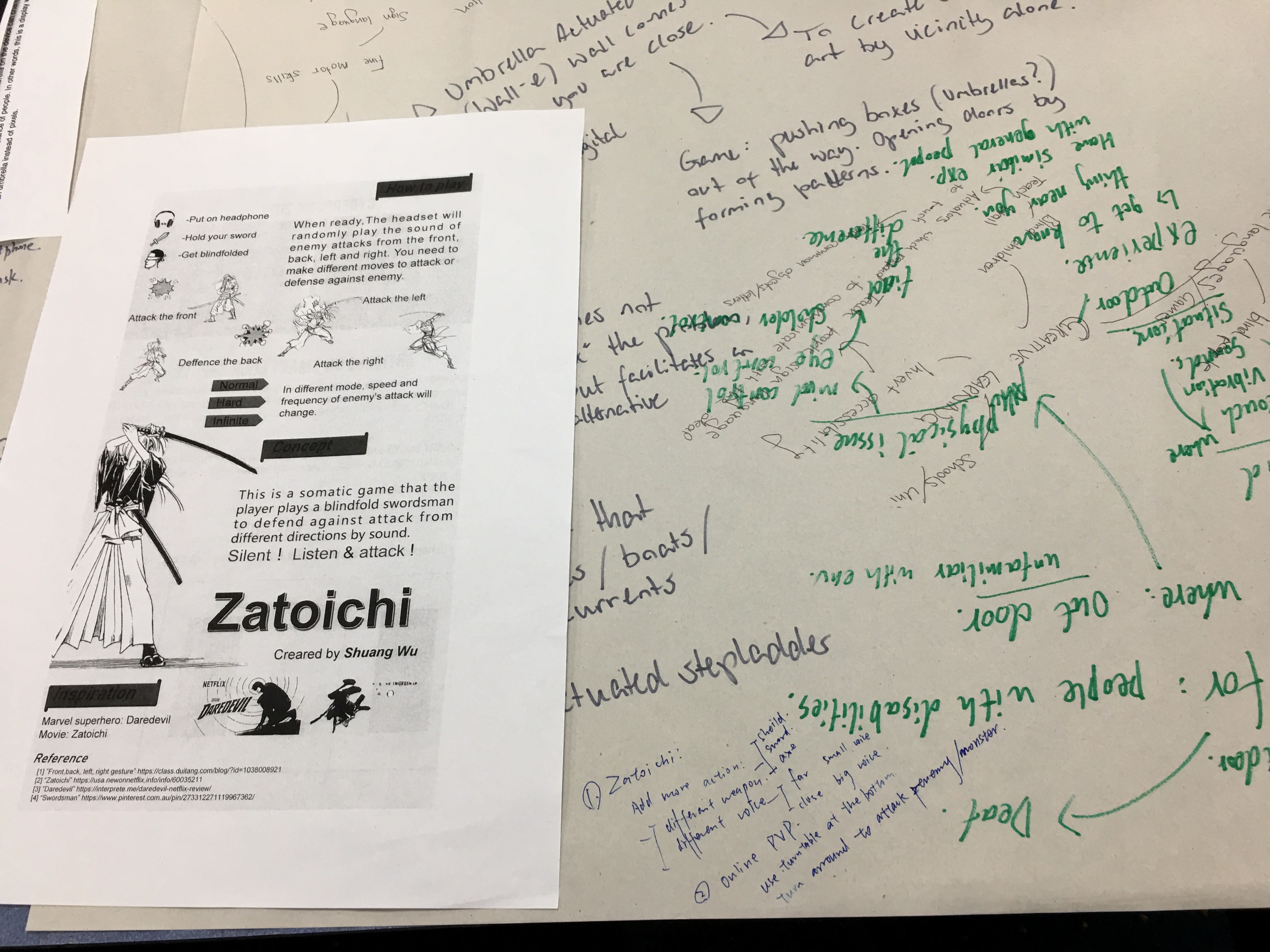 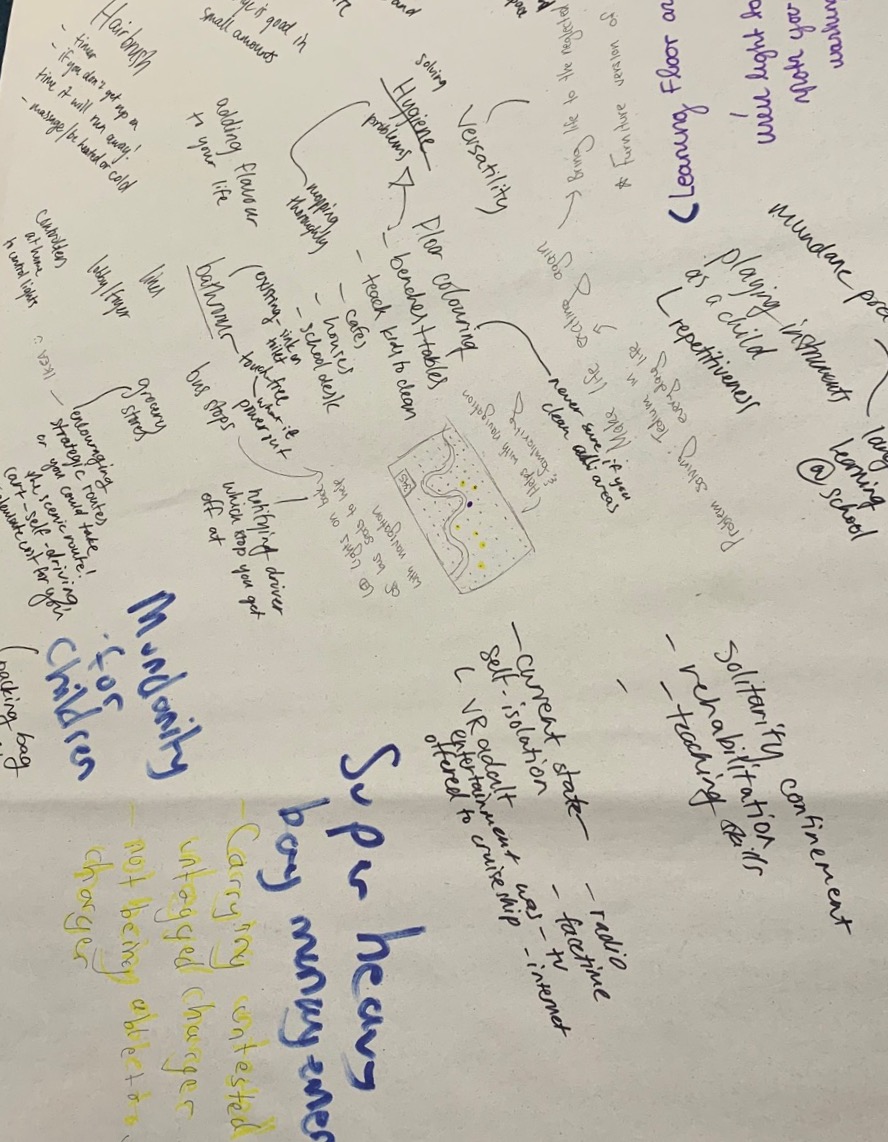