During this week, we pushed forward the progress of the project as planned. On Tuesday, we re-confirmed the division of labor after the team composition changed, selected the option 4 plan and got the consent.

1.Questionnaire for housework and game preference

This mission was accomplished by our teammate Zhuoran. The other teammates check it and give some suggestions for modification. In my opinion, too many of these options will increase the cognitive burden of the respondents, so I suggest Zhuoran remove some options.

In addition, the questions in the questionnaire are mostly multiple-choice questions, which can be completed quickly after testing. It is still being tested, and we will make changes based on the feedback from the surveyed subjects.

Here is the link of the questionnaire：

The main part I was responsible for is background research.This task will last for a while because I haven't learned about housework games that use projectors.

I plan to conduct research on three aspects:

I will extract inspiration from them and apply them to our projects.

This background research is mainly about the first aspect and a part of the second aspect.

(1) Use silicone posts instead of real football, and realize 360 ° surround, users can shoot from any angle, and cause a real touch. The game experience will be better if we can add a real touch to the shot, but the specific form remains to be studied.(1)

(2) A semi-perspective VR eye mask is used. One of the eyes sees the virtual imaged football of the VR eye mask itself, and the other eye sees the information about the transition of the field and its own motion displayed on the screen. This technique will help us if we use VR eye masks and also observe the surroundings, but how to design the hardware is a problem.

Disadvantages: Although it can achieve the sensory effect of providing unlimited venues for athletes in limited space because people need activities when doing housework, the hanging method is not suitable for our solution.(1) 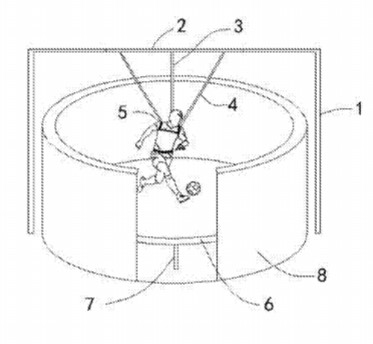 1) Treat chores as everyone's responsibility and therefore work for free

2) Pay every trifle of the child,

Our reward system can be set to give rewards for completing housework every time, or issue rewards after accumulating multiple housework, motivating children to complete tasks.(2)

2) A variable and quantifiable outcome,

4) Interactive: The players can influence the outcome by doing some effort,

5) The players are emotionally attached to the outcome,

Based on the reward system above, we need a variable and quantifiable outcome.

Different chores should have different rewards because of different physical output.