With the prototype deadline looming, I cracked down on working on the functional aspects of my prototype. After getting the LDR to measure the varying light levels, I was able to provide visual feedback to the user through a Neopixel strip, with red alerting the user of high energy usage, yellow resembling medium energy usage and green resembling low energy usage. In addition, I managed to connect external lights within the build that represented lights within a home. With these lights connected, I added a delay for when maximum sunlight level was detected by Emily, however at this point, the lights would turn off instantly rather than after a period of time.

I did some user testing with this version of the prototype with my family and found that they felt there was not much user interaction with Emily and that Emily could be even more annoying. They also suggested having some sort of feedback in the end when Emily recognises that user's have been improving on their energy saving behaviours. With this feedback, I'm thinking about incorporating a way for the user to perhaps touch Emily in order to interact with her. I just have to develop a reason for the user to touch her now! In terms of providing feedback to the user regarding their energy saving behaviours, I think some sort of unique and pleasant visual experience would be cool, so that the user is made aware that they are making progress. This coupled with perhaps a song could be a unique and fun idea, which is a stark difference to Emily's usual annoying antics.

I thought the progress that I had made so far was good, but based on the feedback from user testing as well as my own gut feeling, I felt the concept was too simple. From here I wanted to work on fixing the delay to begin delaying after a period of time, as well as adding further annoyance to Emily through the use of flashing the lights in the Neopixel strip as well as sound, and an element of interactivity between the user and Emily. With the stress of the upcoming assessment and figuring out all the components I was trying to include, I ended up having a bit of a mental breakdown and getting confused with my concept with exactly what I wanted to implement into Emily. So, I sat down and just drew out a plan of how I wanted Emily to react and respond to varying situations. I planned out the main components that Emily would respond to and then worked from there. 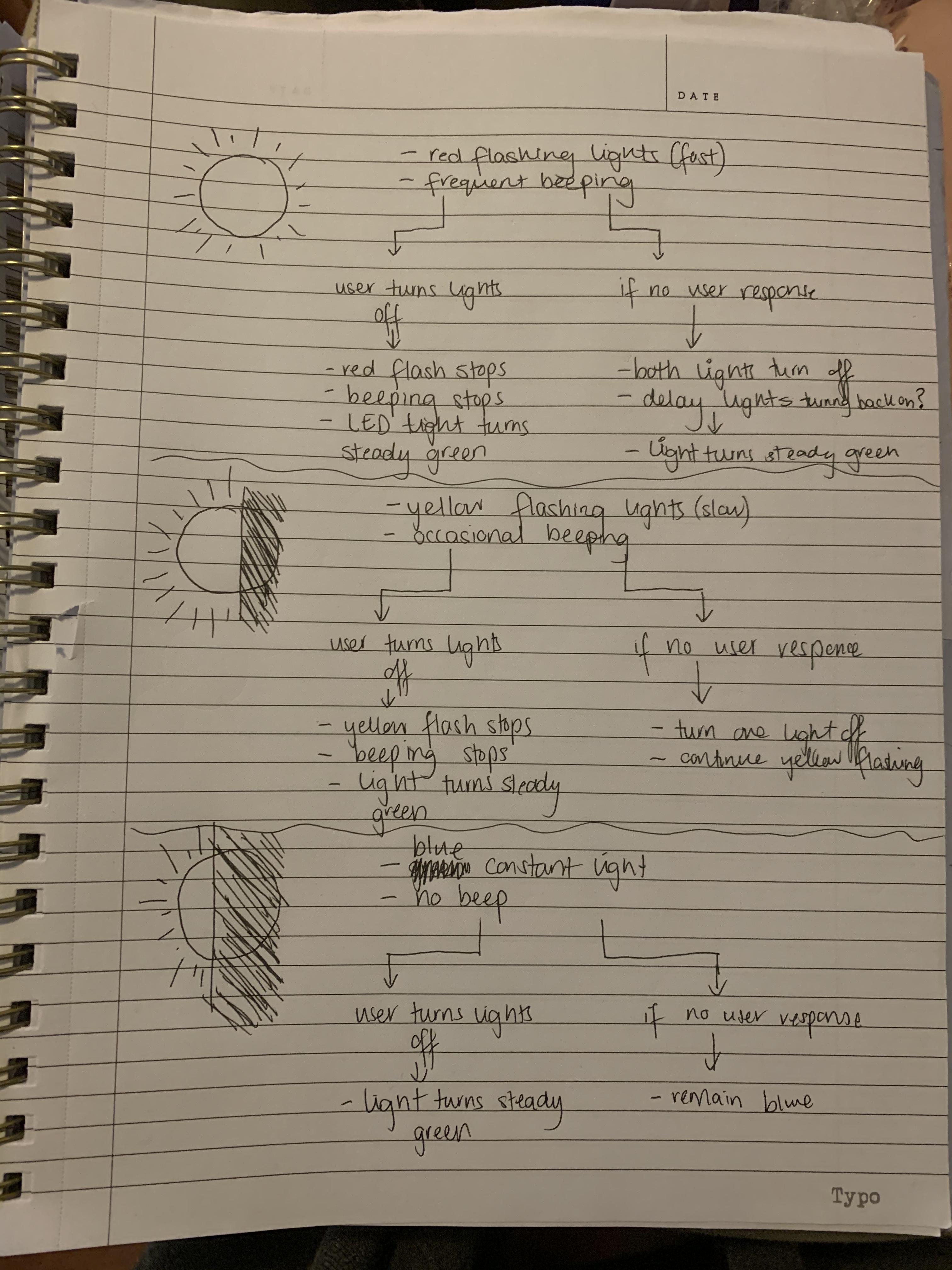 The finished prototype was quite successful in relation to the planning that I did above. I incorporated the flashing of lights, as well as an annoying beeping sound corresponding to the frequency of the flashing from the lights. I also managed to add a delay to both the red and yellow stages before the lights turned off, and incorporated a switch that allows for the user to interact with Emily rather than Emily just being an object that sits within the home. I didn't end up adding an element of feedback to the user, so that is something that I aim to work on for the finished concept!

Energy Saving Emily is a household device that is designed to help users in saving energy around the house. Emily has been designed to fit within the domain of change through discomfort, where aspects of negative reinforcement can be used to promote behavioural change. When lights within a house are on, Emily can detect the amount of sunlight available. Depending on the amount of sunlight detected, Emily annoys the user through flashing lights and annoying sounds and can turn off the lights within a room in order to create discomfort for the user to push behavioural change in reducing unnecessary energy wastage.

It was actually quite fun to work as a team to provide other teams with feedback. Our team worked very efficiently, even though it took quite a while to get through everyone assigned to us! It was definitely a challenge to provide feedback that was thoughtful, specific, actionable and within the word limit!

I gained some interesting feedback from the team appraisals. It's really interesting to gain other people's perspectives as they always come up with ideas and suggestions that you've never really thought of before. I summarised the main aspects of feedback as such:

From here I will take on the feedback that has been suggested by my peers. They have given some very interesting insights that I look forward to exploring. I also need to incorporate the feedback stage into Emily to alert users of their improved behaviour, as well as find the materials to come up with an appropriate form for Emily, possibly even making a paper mache dome that is semi translucent. I have also started developing my website portfolio this week, so will continue to do so over the coming weeks.

After doing some exploration around a translucent material, I came across this video showing how to make paper translucent. I would like to see if I can possibly incorporate this method and make a paper mache dome with the translucent paper, to allow for the Neopixel LEDs to shine through. We shall see how my testing pans out!

Would be good to expand on the insights you gained here and how you might incorporate them into your project. Documentation is good.