This concept is a physical robotic hand that moves and creates gestures physically to interact with people around it. A User would wear or hold the hand near them, as a communication device to interpret to the people around them if they want to talk or not. To put it simply, if the user wishes to be left alone or not talk to others, then the hand will be rude or make dismissive gestures, to try and get people to leave its user alone. Alternatively, if the user is happy to be approached, the hand will be friendly, giving thumbs up or beckoning others over to the user.

The hand reacts in the way the user sets it, being friendly or hostile but the hand will react to how these people approach it, rather than simply waving or flipping the bird, gestures will be made depending on how these people approach, with the end goal of interacting with their facial expressions, speed and even what they say, mocking them or reacting accordingly.

This week I worked on the group presentation report establishing the concept, domain space and what i want to work on throughout this course, creating a working hand with gestures to promote social distance. The report work consisted of research of papers in similar fields and on concepts using gesture controls, people's understanding of gestures both by itself and when paired with emotions. These found that many simple gestures are hard to misinterpret, allowing easy understanding, at least in western/Australian culture of signals such as a 'thumbs up', 'flipping the bird', 'rock on' and 'hang loose' signs all being quite recognizable, (with most people just reading the names here and you know what fingers to hold up). In addition to this, robotics are at a stage where hands with dexterity and a range of motion can be created, and as a mock-up, i iterated upon the hand design and made a cardboard mock of the robotic hand for size and joint/movement reference. This will be used to see how feasible the size of the hand is along with future use for interpretation and understanding of the concept based of user reactions. The mock was given further detail to illustrate the concept, overall turning out quite well for a first draft, while future improvements can be made. These include; giving the joints a wider range of motion, capped finger tips without the rough edges or flat tips, a smaller and more pronounced 'hand' design that is clearly identifiable with a smaller more manageable size.

In the one week break last week, my team and I met up and continued developing our ideas from the brainstorming session we did as a group in week 3. In week 3, we talked about giving a hand a personality and using it as a way to help people in their everyday life. We decided to focus our idea on the backpack hand that acts as a personal space manager. 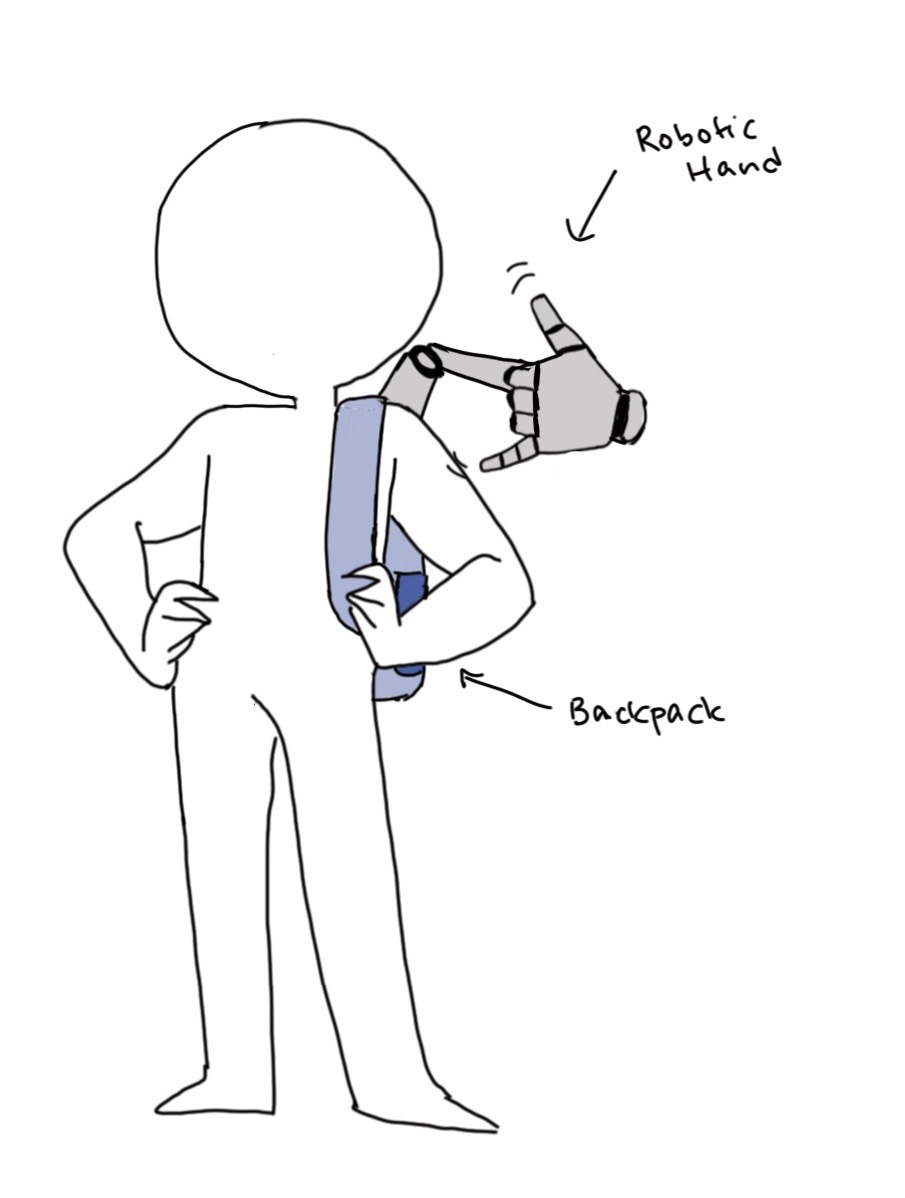 We thought about other ways of giving the backpack hand personality and sassy-ness, which was really fun and funny. However, after having ideas that were going all over the place, we decided to think about a problem space first before continuing.

Problem Space -> People want appropriate social distances for their social activities, without having to tell others.

With this, we decided on two intended experiences, the personal space manager (our first idea) and the conversation stopper. We named our concept The Helping Hand. 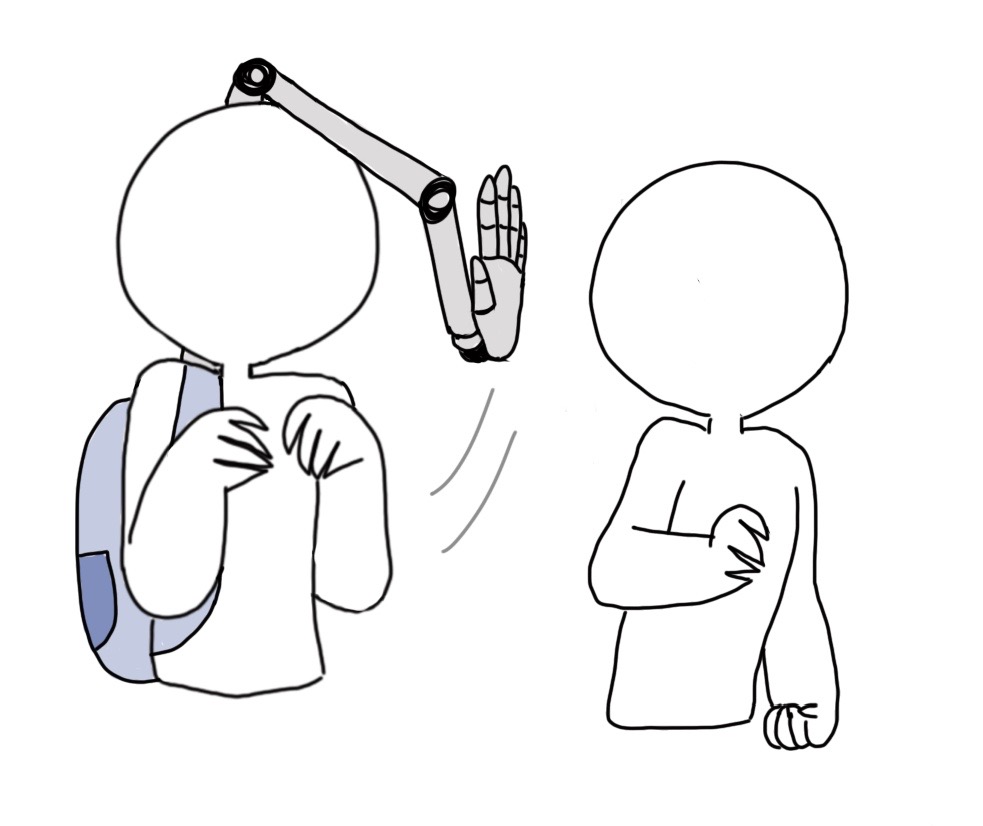 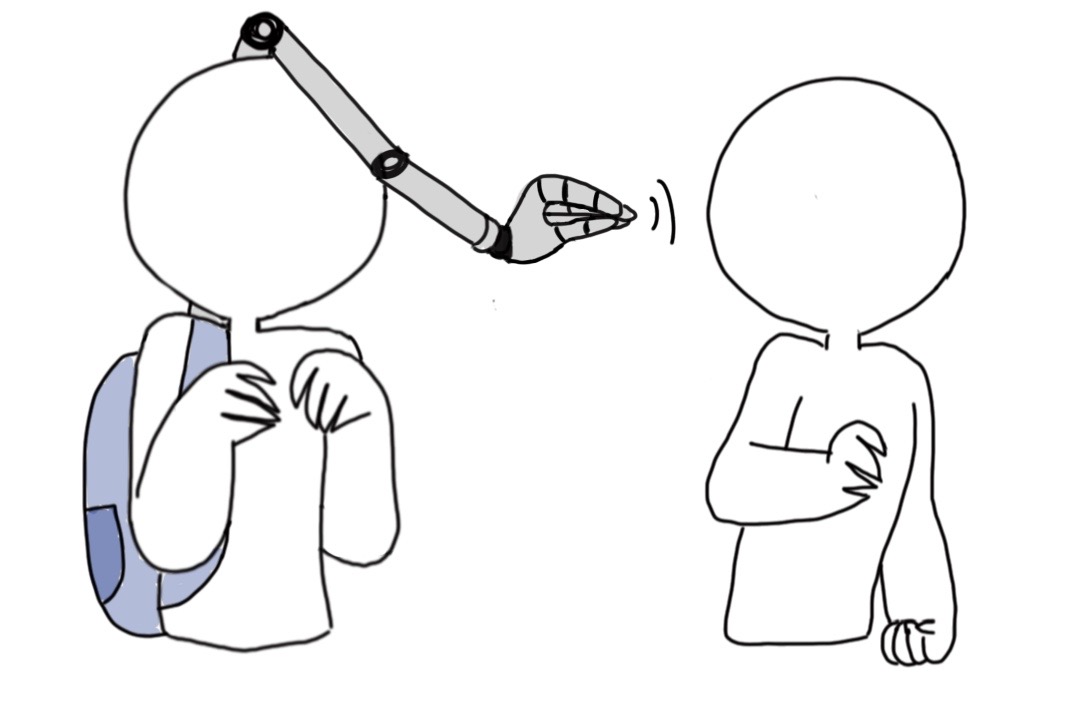 We decided to use google slides to present our concept. Each of us chose a section to present and did voice-overs. My part was the intended experience section as I was in charge in sketching the concept and the storyboard.

Below are the some points from the critiques about The Helping Hand and my thoughts about it.

We added a backpack to our concept as we thought it would be easier to move the hand and its parts around. But I do agree that it is still very big and probably too heavy to walk around with it, especially in crowded areas (spaces where you would want to use it). My team and I talked about some ideas like attaching a smaller arm on a cap or a headband.

Gives the opposite effect

As we wanted to make this arm seem as sassy as possible, I guess it may come off as rude and hurtful to some people. The tutors gave a good idea of making it appear as a separate entity so it would not be you being rude but the hand instead.

It drawing attention from other people could probably be solved by making it smaller or by changing its form to something simple/everyday so it can be more inconspicuous.

For this concept, we wanted to move away from using sounds (voice), lights or facial expressions to using gestures or body language instead. This would make it more novel and give it more sass. Lorna and the tutors gave good examples of other forms that we can think about instead of using body parts. As the team members would each be designing a prototype separately, we can each focus on a different type of form and see each form's benefits and disadvantages.

Points to Note for the Future

This week we did lots of idea generation and concept creation in groups first in world cafe then in our allocated teams. World Cafe broke the class up into small teams seated at individual tables where the group would discuss and evaluate a theme, taken from the presentation ideas. At these tables the theme itself was evaluated and new ideas for this theme were created in a short period of time before the team split up and moved to new tables. At each table one member of the last team would stay to inform the newcomers or 'travelers' of what was discussed last session and to further discussion onto new topics.

Personally I went to tables that interested me, Musical Things, Sassy Tech and Wearable Tech. I would have liked to visit more tables and generate different Ideas however I was selected as the host multiple times as I seemed to grasp new concepts quickly and have a good way of describing them. After these sessions were done we then requested to join groups based off our favourite tables and concepts, mine being the ones above.

On the Wednesday of this week we found out our new teams based off our selected concepts and matching timetables, so I joined my team for Sassy Tech, with Lachlan, Zhijang and Shao. We all liked the idea of technology with a personality and worked on mentioning what our interpretations and expectations were, along with writing up a team charter. In the second half of the session, we found a basis for design, using the Hand from the Secret Handshake Lock, and putting it into different applications or to help in other ways. Here are our inital sketches and ideas for the concept, where I drew lots of different robotic hands and gestures that could be made to give it personality and character. We also had lots of different ideas for the physical appearance of the hand, making it look realistic, or giving it unnerving qualities like extra fingers or multiple thumbs. This can be decided later, as the difference between a metal, flesh, green, extra fingers, elegant, manicured or hairy hand aren't as important as the role it plays and where it will be implemented. This sheet shown depicts some of the evaluation we did as a team to create ideas of where a hand could go, and we narrowed down some of the ideas for feasibility or practicality. This week I had my Space induction. This was a session whereby we learnt how to most appropriately and safely use of the building 78 workshop room.

During the session, there was a heavy emphasis on health and safety. Checking tags, visual inspections of the tool prior to use and never force a tool were the main takeaways from the session. Closed in shoes must be worn at all times and due to the size of the class, we cannot "claim" an area in the workshop. 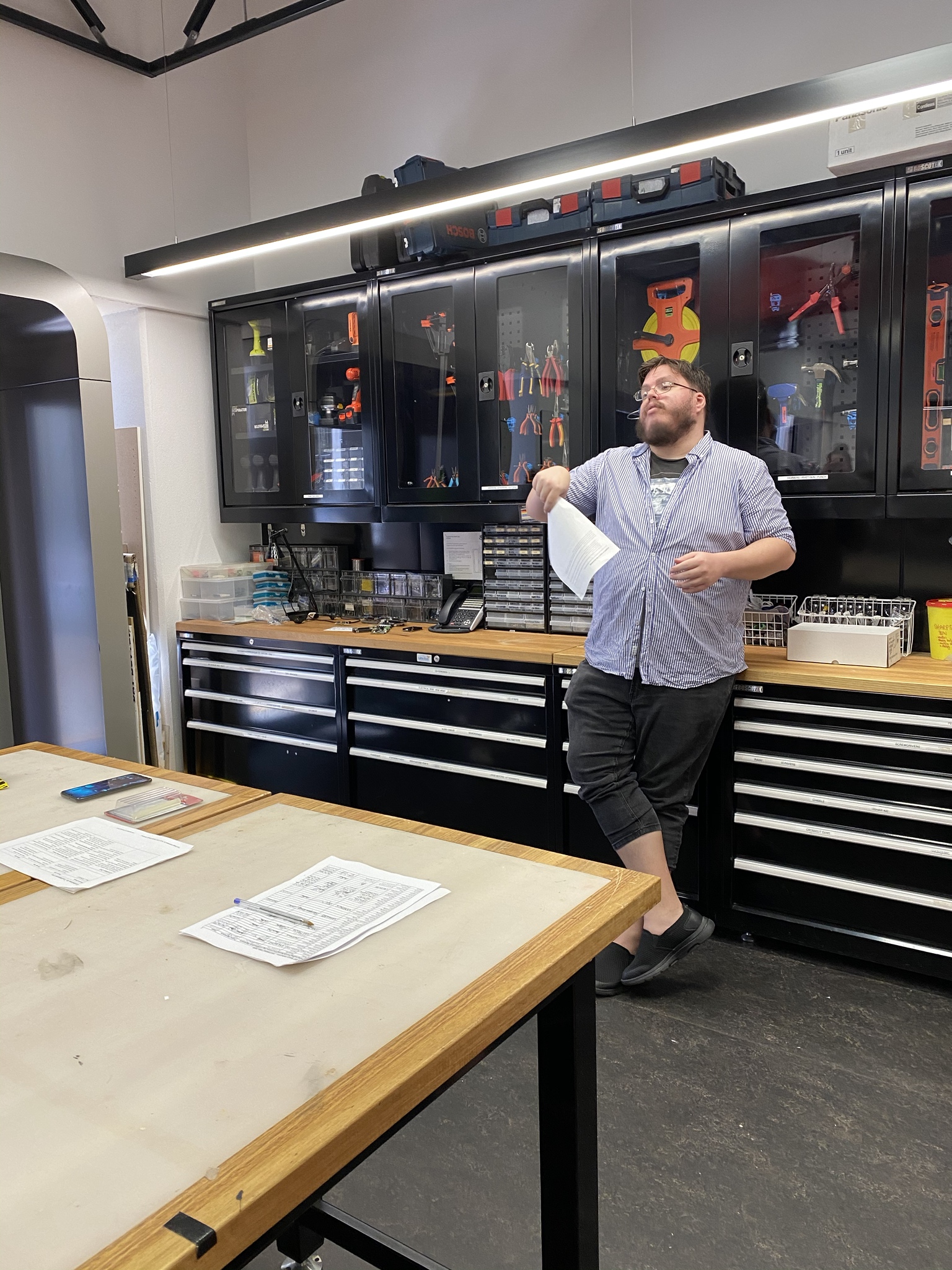 Though I have no legal power, I would like to make the request anyway. I personally feel uncomfortable with photos of myself online. If you could remove it that would be great, or at the very least blur my face.