Through the critique from the Slack, our team discussed and concluded several points as the future potential improvements.

What our team have done so far

After reading through the critique, our team has conducted some research about the existed coding-learning robots, for example, the Anki Vector and Cozmo. Anki Vector is an AI robot that can express emotion and accomplish simple problems. Furthermore, the Vector supports audio-based commands input and gives access to users to re-program every function of the robots. That is perfectly suitable for our concepts and solve the technical problems, as we have no idea about how can we build our own intelligent character. However, with the help of Anki Vector, our team can revise the initial idea and make the interaction process easily implement.

Impacts on our concept

The original workflow of the Ninja Run is to use code blocks to compose a functional program and recognized by the camera. Then, the camera transmits the data to our laptop. Finally, the laptop output the transcribed data to our intelligent character to manipulate its movement. Credit to Owen's magnificent works in the proposal slide, the image below demonstrates the basic workflow. 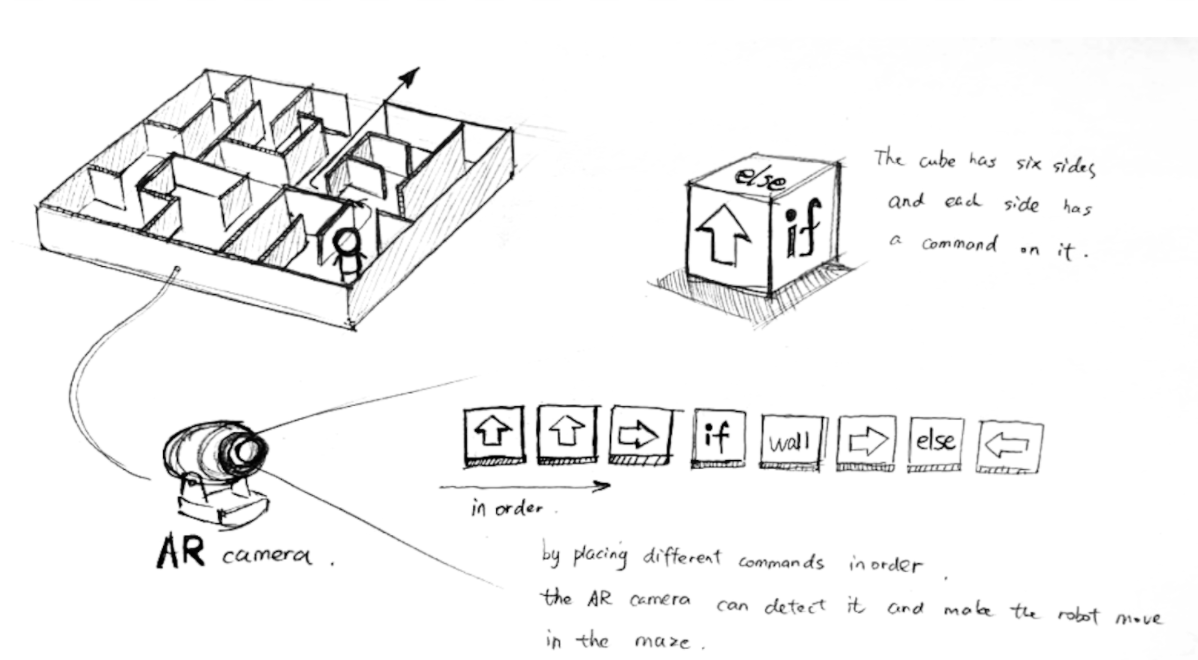 Although the workflow is clear, the mechanism and technology are still not workable at that time.

The new concept of our project is that using the Anki Vector as our character, in terms of its functions, we can use voice input to send commands to it. We only need to pre-program some functions with it and use voice input to trigger those functions. Besides, based on the ability of the robot, our team modified the content of the game, as the maze is only involved in moving but we want our users to learn more coding technic.

Therefore, the new game will be moving the box to the target place(still not the final decision). It has some benefits, like with the different goals, the game can shift the difficulty to improve the usability. We still keep the coding box because of its tangible features that can enhance the understanding of users.

About the camera part, we want to build an app by unity with the AR technology. When it detects the coding blocks, the app will output the matched audio to trigger the robots.

The plan for the next weeks

The allocation of every team member for this week is to explore the gap between plaint-language and coding language and get through some literature reviews to find out the playable solutions. Besides, put the concept into practice, use the unity to build the app and try to re-program the Anki robots to meet our demands. Furthermore, the concept and interaction flow are still not fully decided yet.