Smartwatch app can record and improve users' awareness of sedentary behavior. This related point of view is of great help to the whole wearable device and its interest is worth studying.

The prototype would combine the user's comments and their thoughts to readjust the practicability and operation of the function and the impact of the function. Although creativity in production is essential, prove whether the product can meet the needs of the public or whether the function can help users in their daily life, which is very important.

Vibration: Beep sounds is a more exaggerated sound mode than ring tones. However, in the office area, 28% of people hate beep sounds very much, which will directly disturb the working state and make people bored (Hesse.J, 2015).

Office-worker: According to the UK, workers spend 75% time to sitting without moving

Step 1: the user pastes Neo pixel ring on the arm and calf respectively, and determines the ring direction is accurate

Part three: after 60 minutes of users' sedentary behavior, bracelet will change its lighting.

Part 4: users need to find other users according to the direction provided by the light

Part 5: after users find each other, the multiplayer interactive game starts

The last part: after the sports time, users return to their jobs.

The prototype we designed has 6 functions. Andy and I designed the prototype together. I am responsible for vibration, touch and data transmission, and then these parts of the function are shared in the whole design. Andy is responsible for technical functions, Mount detection functions, LED control and some parts of data transmission. However, it is temporarily impossible to track the flicker of another user's location through a neo-pixel ring, so this function is only displayed by simulation. We have tried to use the GPS sensor to sense the position of another device, but because the position transmission received by the GPS sensor is very large, the short distance detection cannot be realized. In addition, infrared and ultrasonic were also considered, but due to the volume of materials, we gave up trying them. Next, I'll explain how to build and contribute to this prototype. 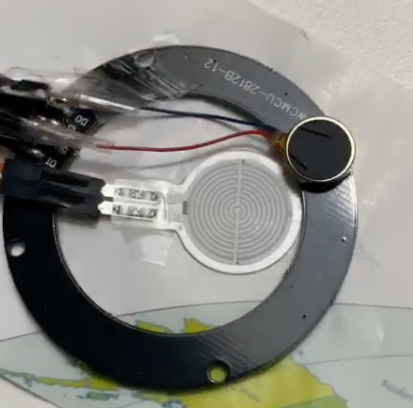