OSCAR is a three part bin that tracks the amount and kind of waste produced by each person in a household. Giving people a way to see how much they throw away can help highlight unnecessary waste and make them think about finding a more sustainable alternative to things they buy.

OSCAR can be setup to have profiles for everyone who lives in a household. A display on the front of OSCAR shows the current amount of waste produced by each person from the start of the week. At the end of the week when the bin needs to be emptied, OSCAR will decide who must empty it based on the amount of waste produced that week. When someone uses OSCAR the items they have thrown away will be checked by OSCAR to see if they have placed it in the correct bin. If the wrong bin has been used, OSCAR will make a horrendous retching sound and throw the waste back out of the bin.

I came up with the initial idea for OSCAR during the brainstorming session with the playing cards, which gave me the sentence ‘Design to train in a kitchen using sound with the quality playfully’, the idea was then further developed within the group at my table. The other inspiration for OSCAR was Oscar the Grouch from Sesame Street. 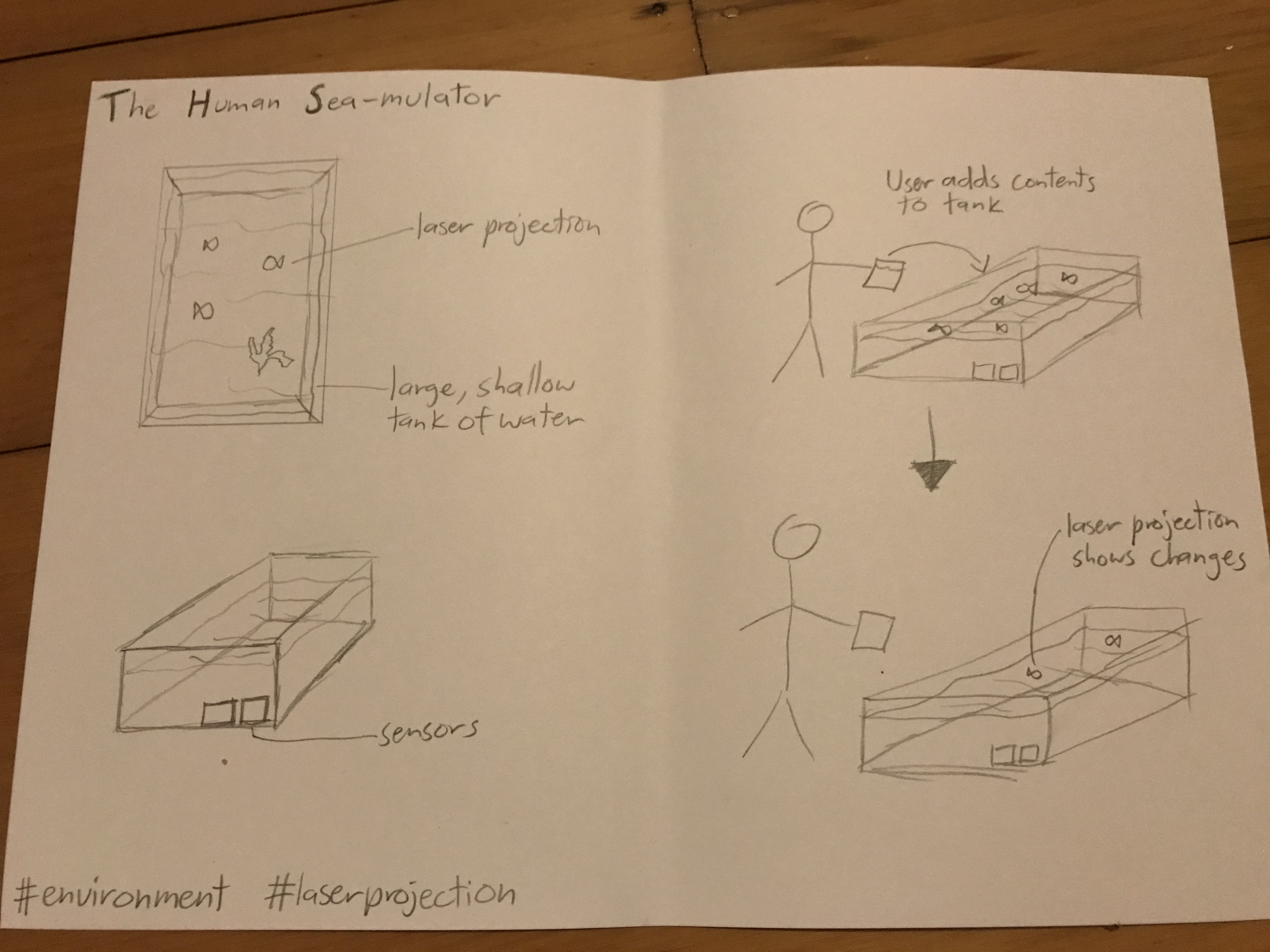 This device is designed to create awareness about the impact of human activity, climate change and rising temperatures on the ocean. It consists of a large tank of water with sensors for various changes such as temperature and salinity, extra jugs and boxes filled with various things that can be added to the tank, and a laser projection system to project images onto the water surface.

Users add contents from the jugs and boxes to the large water tank, and the laser system projects images onto the water surface depicting various changes in the ecosystem of the ‘ocean’ based on what users added. For example, users adding warmer water increases the overall temperature, and the projection changes to depict bleached coral, fewer animals, wilder storms, and other effects linked to rising ocean temperatures. Users can also add contents in attempts to restore the ‘ocean’ to its original state, such as colder water. Other potential interactions include adding salt or fresh water, adding and removing human ‘rubbish’ such as plastics, adding and ‘cleaning up’ liquids that represent oil and other chemicals, and adding and removing ‘boats’ that represent fishing and other activities that remove animals and resources from the ocean.

This is intended to be installed in a park or other public place where people often walk past, and can stop and engage with it as long as they like. It is also intended that multiple people can interact with the tank at the same time, so that the effects of one person adding, for example, ‘rubbish’ items while another removes ‘boats’ can be depicted simultaneously. People's behavior and mental condition are influenced by their family environment, their experiences, and their sense of themselves. The maintenance of relations under the same roof is a subject that everyone needs to keep learning and to try.

LOME is an interactive home-installation. It can" listen" to how people behave and say under the roof, and the flower's condition reacts.

LOME can CAPTURE the following SOUND / VOICE at home :

These features will raise the scale and the vibe at home will be judges as POSITIVE. It represents that the family environment is WARM and HARMONIOUS. The scale will keep within the safe area (green), and the flower will stay in FULL BLOOM.

Also, when these SOUND / VOICE be captured by LOME at home :

The vibe at home will be judged as NEGATIVE. It represents that the family environment is DARKand DYSFUNCTIONAL. The scale will drop to the dangerous area (red), and the flower will turn to black and die.

By this point, the dome represents home/family, and the flower represent the life and relationship between members. LOME works as a supervisor and reminder for people to be aware of the influence of their expression. It helps people to learn how to restrain themselves and form a healthy and warm home environment.