This week has been a slow week since I've been sick most of it and had to take some time off to recover. I have, however, been able to add some additional functionality to my prototype. Originally, the only indicator the user had of whether or not the transmission had been successful after the action had been performed was that the light within the ball turned off. After some user research I discovered that this in itself was not enough as it could be confused with just a reset of the ball and not necessarily an indication that it was a success. I decided therefore to add vibration to the mix to further enhance the feeling of a successful throw. Overall, the new version of the prototype now vibrates after the throw(when the ball has landed in the users hand again) that is a sure indication that the data on the ball has been sent to the server and the other user soon will receive the recorded message. 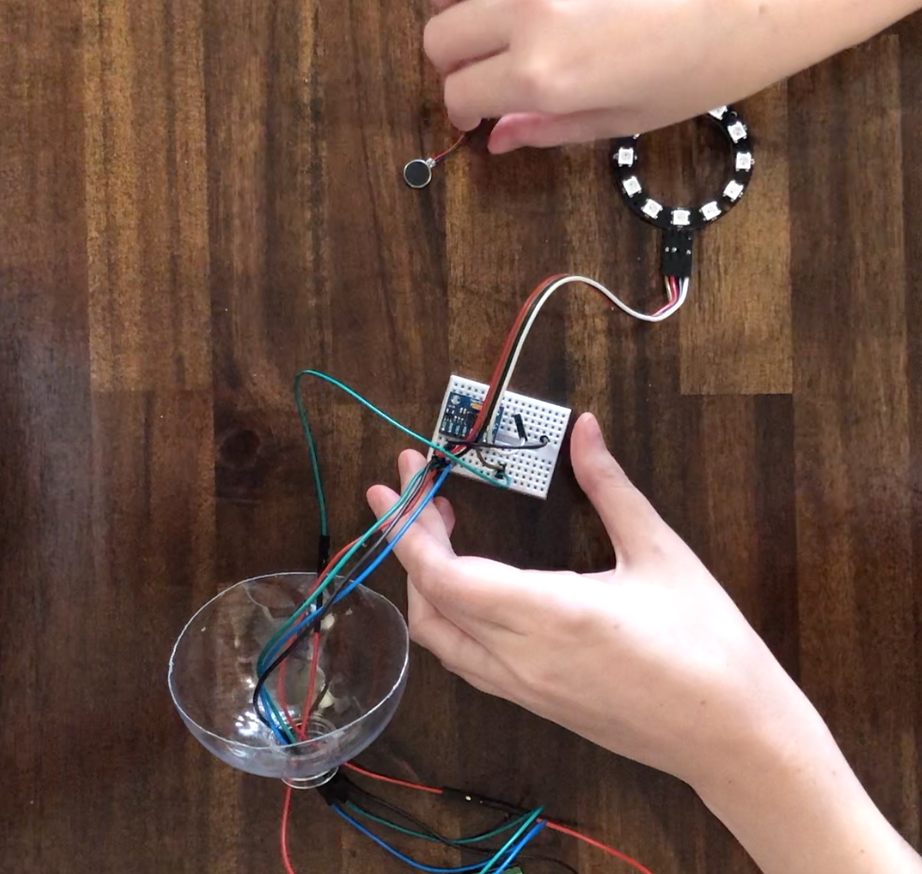 Next week I will focus on making the video and the document for the prototype delivery the final week.

Both Thomas and I decided at the beginning of this week to scrap our plans to have audio working on the Arduino prototype. Both of us experienced a lot of issues with the SD card reader which turned out to be faulty SD card readers, which lost us around 1.5 weeks of progress. Because I couldn't get the speaker and card reader to work I instead started to look at how I could play sounds on my computer based on a command from the Arduino. I looked into using the navigator.mediaDevices function found in JavaScript, which I made work when tested in an isolated environment. However, new issues started to arise as I tried to merge the code into my existing client file. Given that navigator.mediaDevices only exist in the browser and my client file needs to be locally run on the machine to access the USB port I had a difficult time finding a good solution. The most promising solution I found was to use Puppeteer, a headless browser based on chromium to have access to built-in browser functionality while running the file from the local environment. However, I still had some issues figuring out how to use Puppeteer for this specific task. Given that I had already spent a lot of time on this issue I did not want to waste any more, so I instead opted to simulate all audio for my prototype just using a phone.

As for this week, we had a standard speak-up at the beginning of our studio class and the rest of the time for both the studio and workshop focused on just keep working on the prototype. As for the studio stand-up, we were to answer a couple of questions, the first one being the one big question we have about the prototype deliverable. I didn't really have any questions, as my main question was how to get audio up and running, but since I scrapped that plan, I knew where I was going from there. As for the main thing I wanted to have working was the actual interaction of squeezing the sphere to listen to the recording and a notification function to display incoming messages.

As for my prototype progress, I started with changing out my RBG LED light to a NeoPixel LED strip as our team decided that we wanted to make our prototypes look similar given that they are all smaller parts of a complete experience. I refactored my code from the RBG LED light and had a working notification pulse running in a short amount of time. Now that the lights worked, I focused on getting the interaction up and running by using a bend sensor to sense squeezing. The only difficulty I found using the bend sensor is that the numbers seem to change from time to time, even when I haven't touched the prototype, so I have to calibrate the sensitivity every now and then. When both the lights and squeeze interaction was up and running I chose to implement some basic haptic feedback using a vibration motor inside of the sphere. At this point in time, the prototype has three different states, as shown below. 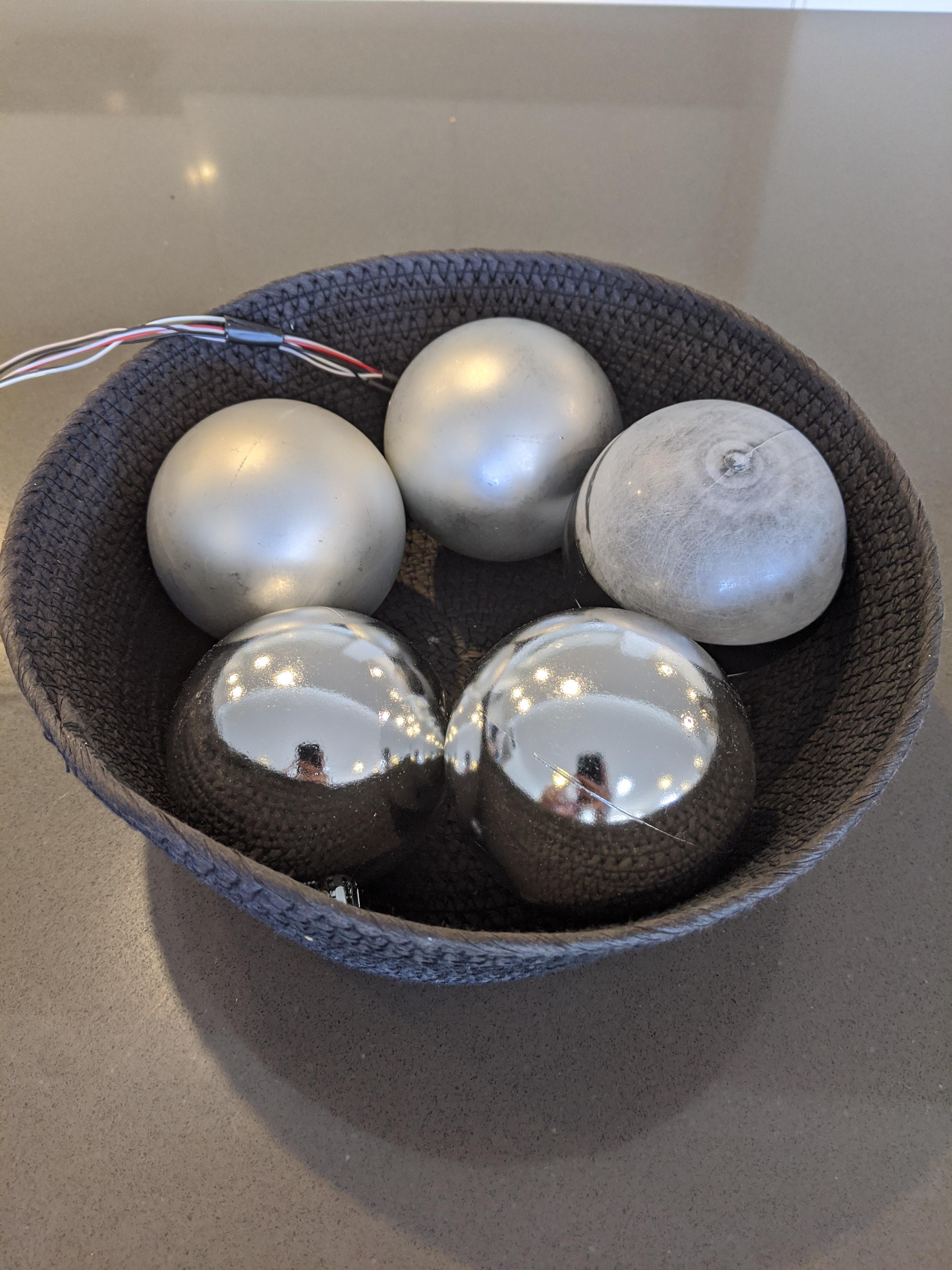 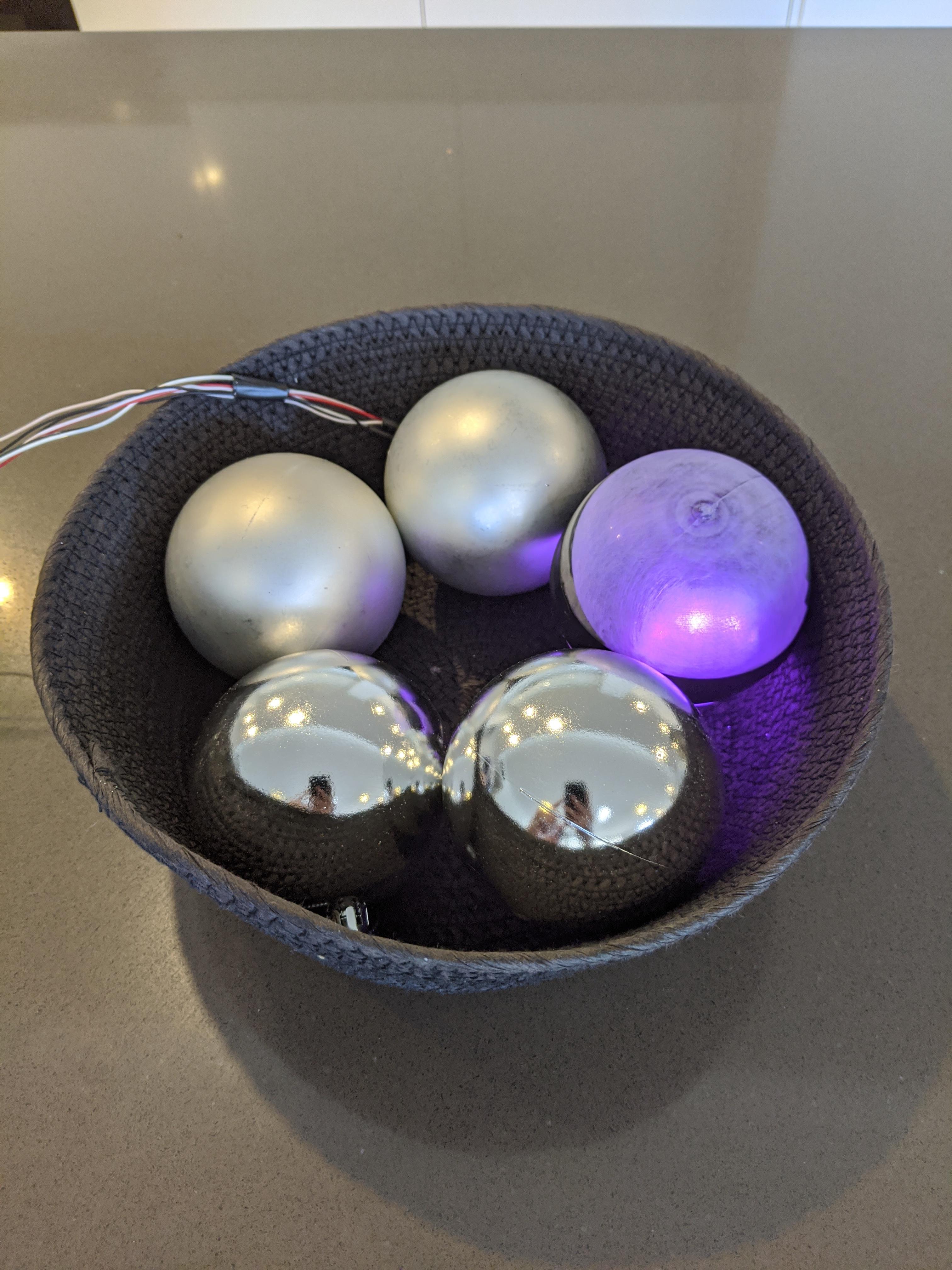 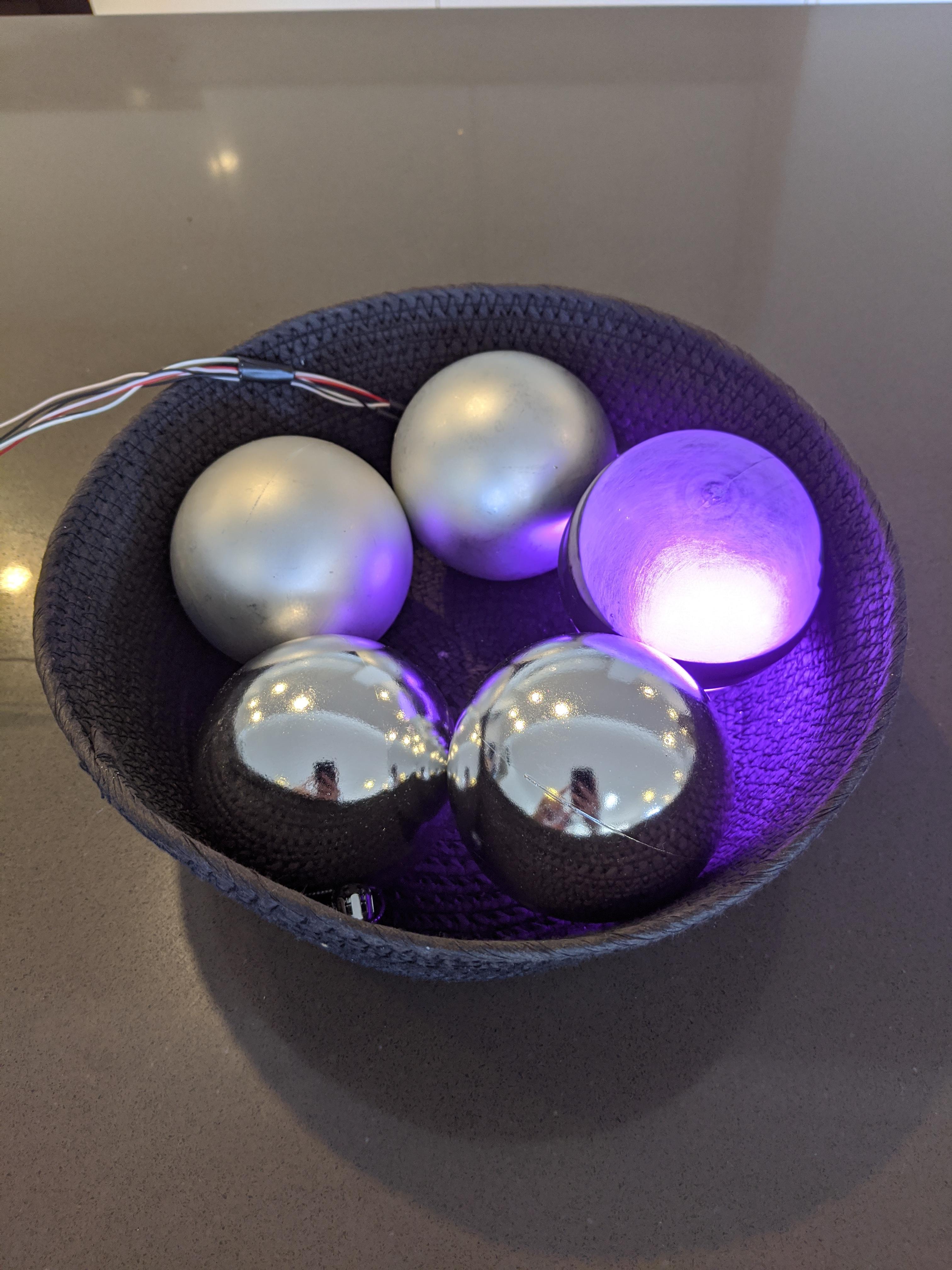 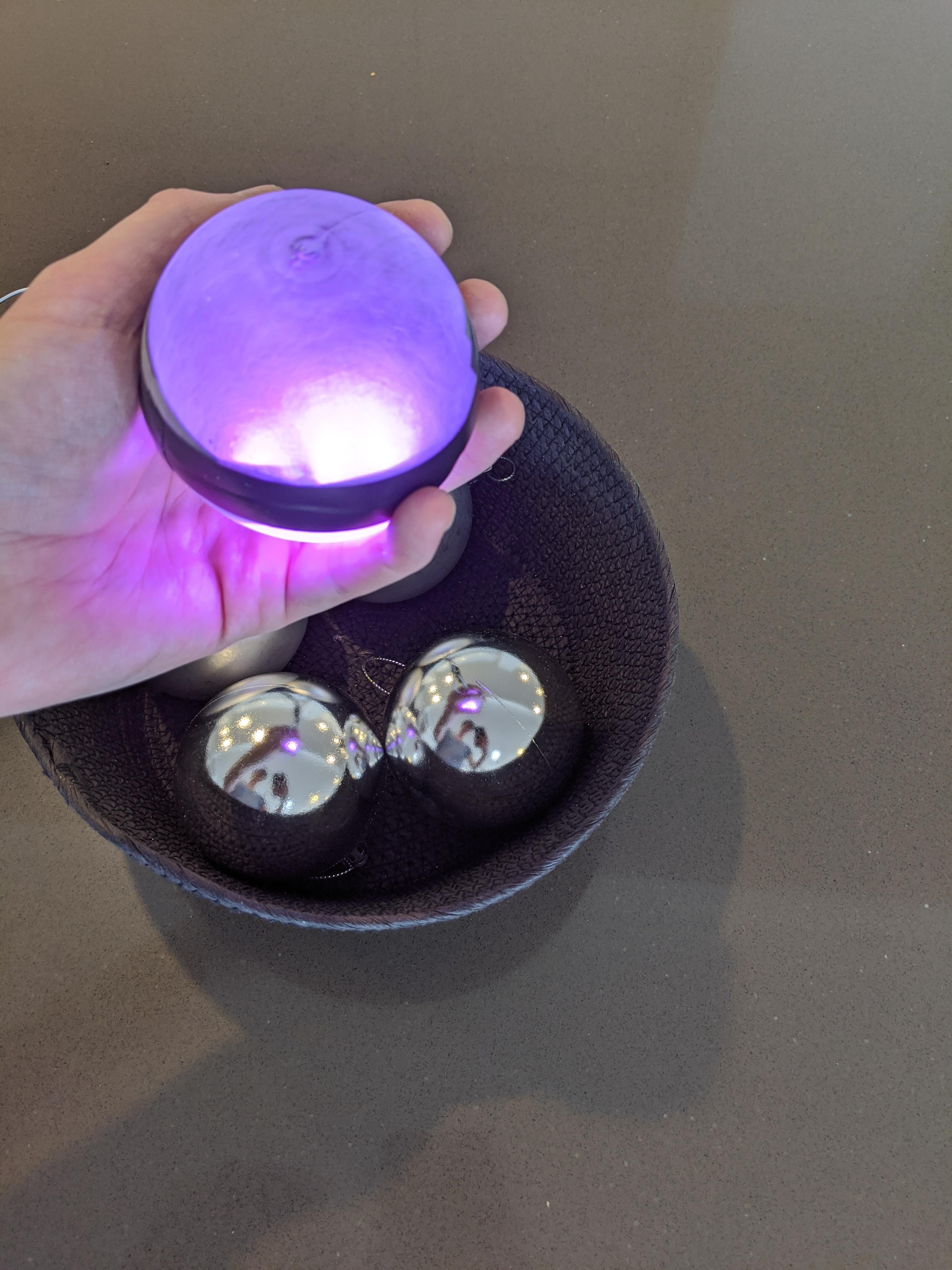 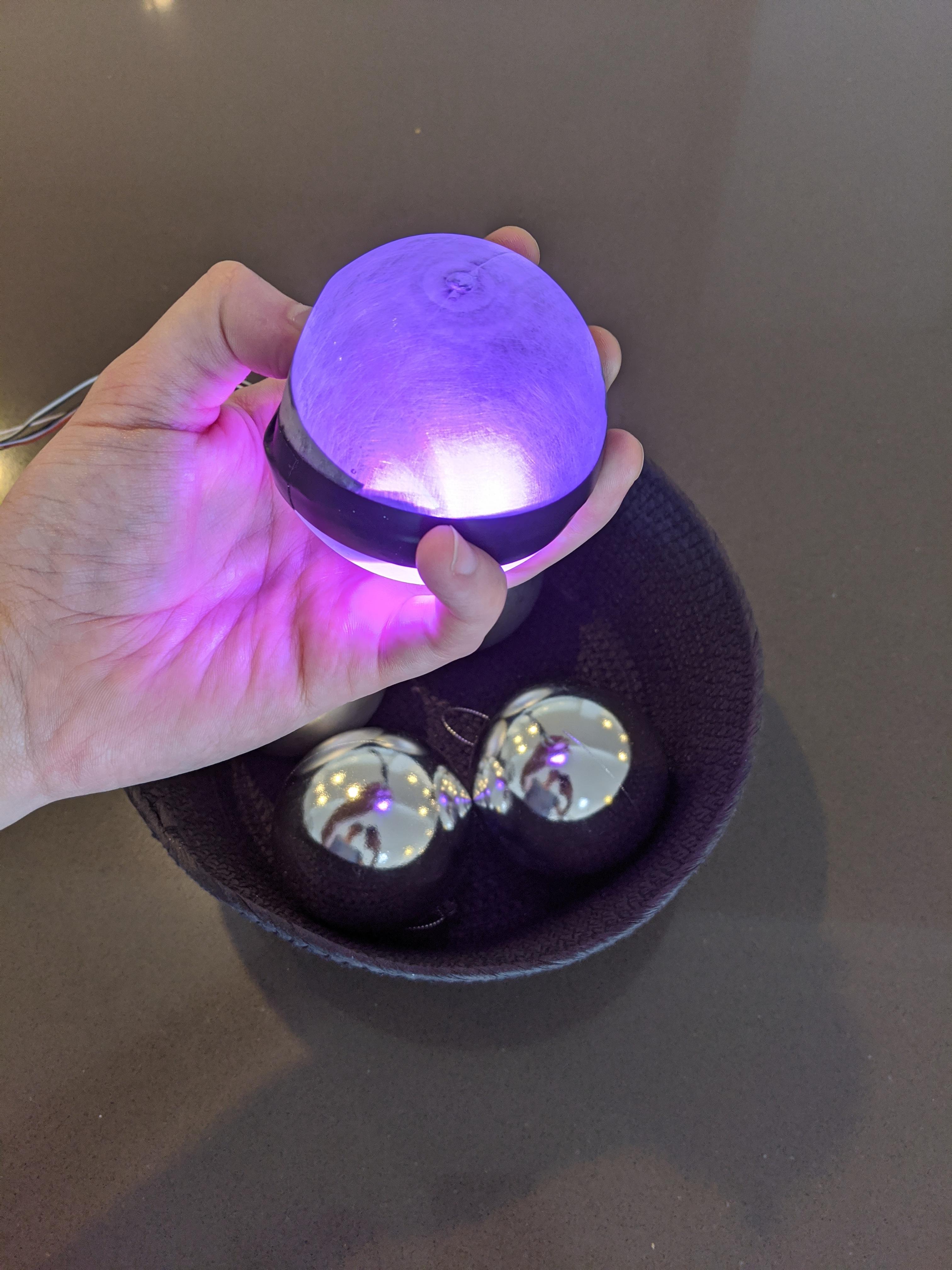 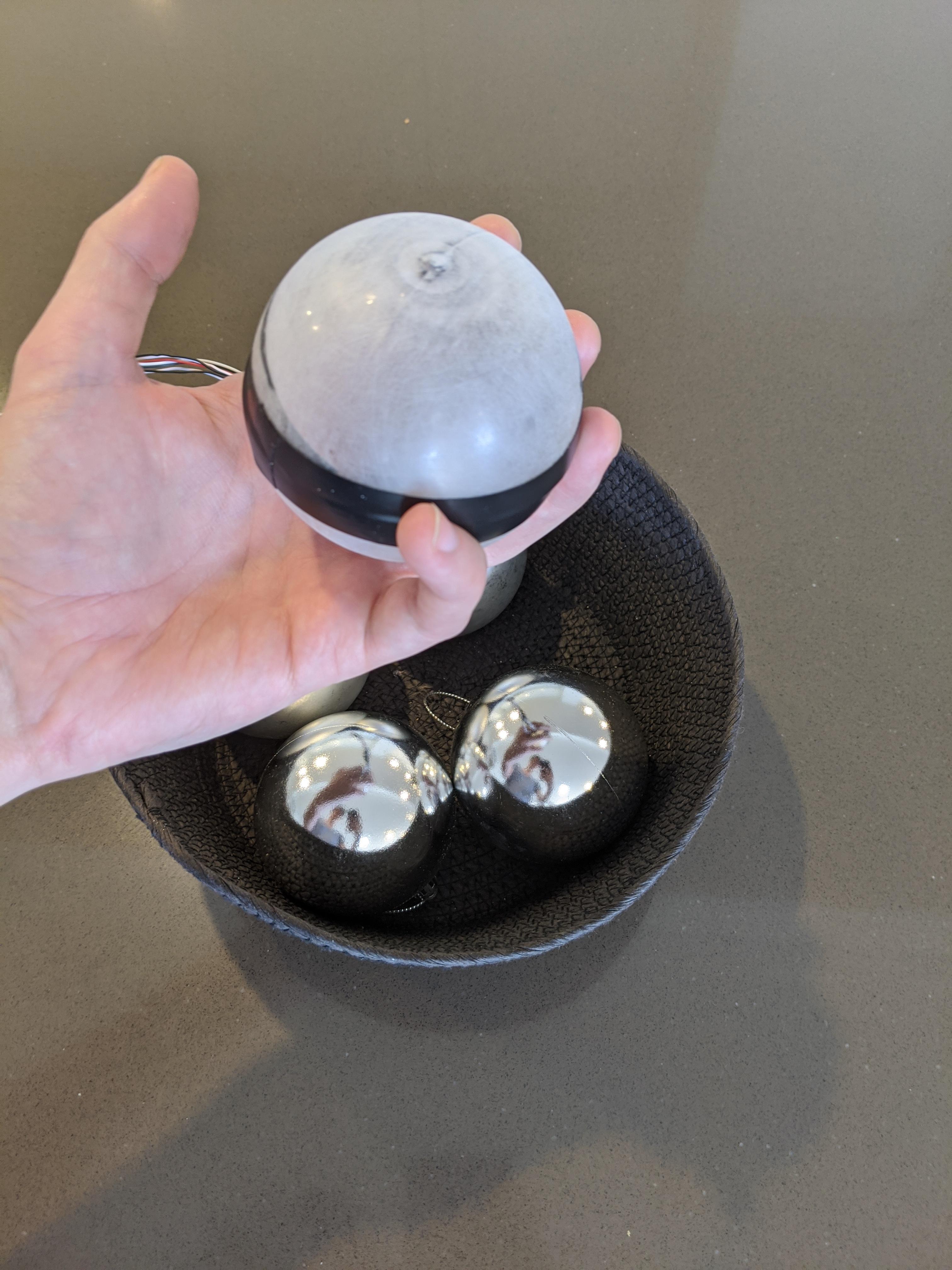 One milestone both Thomas and I achieved this week was to link up our two prototypes. After his prototype is finished simulating a recording a simulated colour, which in the future would come from Tuva's prototype is sent over the server Marie set up and then received by my computer and forwarded to the my Arduino which then starts to pulsate the colour that was sent. This helps us give a sense of context to prototype testers and helps demonstrate the core functionality of the project.

Given that Thomas and I have similar functionality, just that my prototype is the receiving end and he is the sender, we chose to create a joint prototype test. We are planning to conduct two to three group tests with two participants in each group, depending on how many groups we get access to. We sat down together and created a two-sided test with an interview where we both get to test our own aspects in addition to testing a combination of both sending and receiving a message. Luckily we both live with two other people, so we are able to conduct one group face-to-face prototype test. However, for the other groups, we have had to reach out to our friends and do remote interviews. To do this, we have started to videotape our prototypes and written down questions of which will be sent to our testers next week.

I have felt a huge change in motivation lately where I've seen my productivity level sink drastically over the last couple of weeks. I worked several weeks to get my thesis prototype up and running and I faced a lot of technical issues that I had to brute force my way through to get a working prototype. Now that a similar thing happened for the Physical Computing Prototype I have lost a great deal of motivation. Working with Arduinos in both subjects, a technology we barely know how works and not knowing a whole lot about how electricity works feels daunting. Online education for these types of subjects is far from optimal as I don't feel like I get the help I need, even if the teaching staff tries their best. It also seems like we spend most of our time learning to use a tool instead of learning about interaction design. Hopefully, I will see a return of motivation soon as we are closing in on the end of the semester.