After we completed the google slides, I put everything into Adobe Premiere Pro.

It turns out that you cannot add an Apple produced mp4 to Premiere Pro. 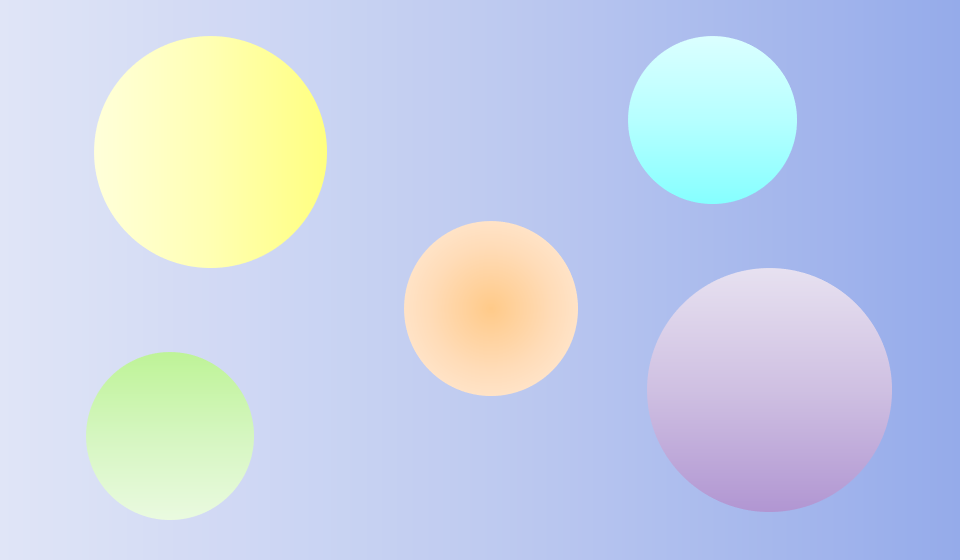 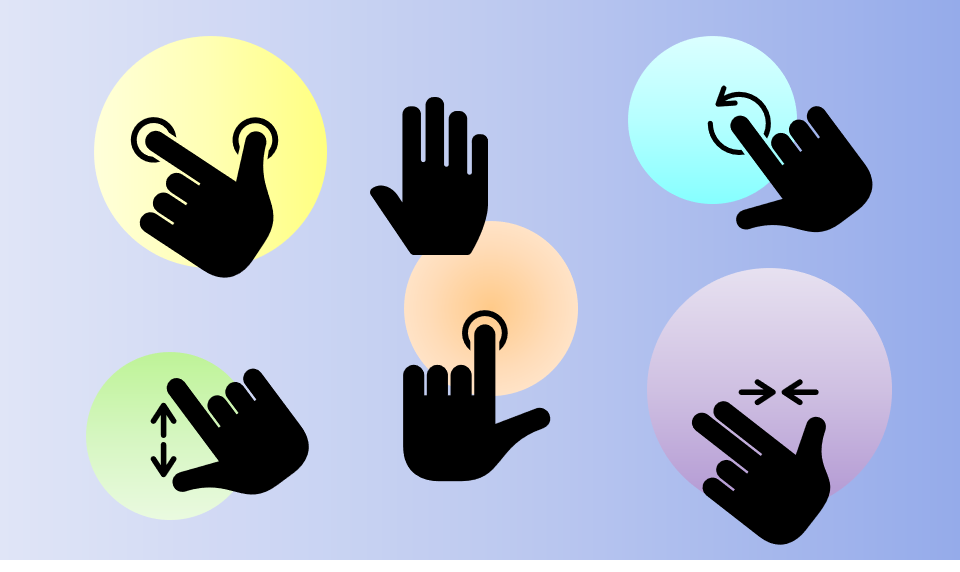 It was great to see how teams had built off individual pitches. 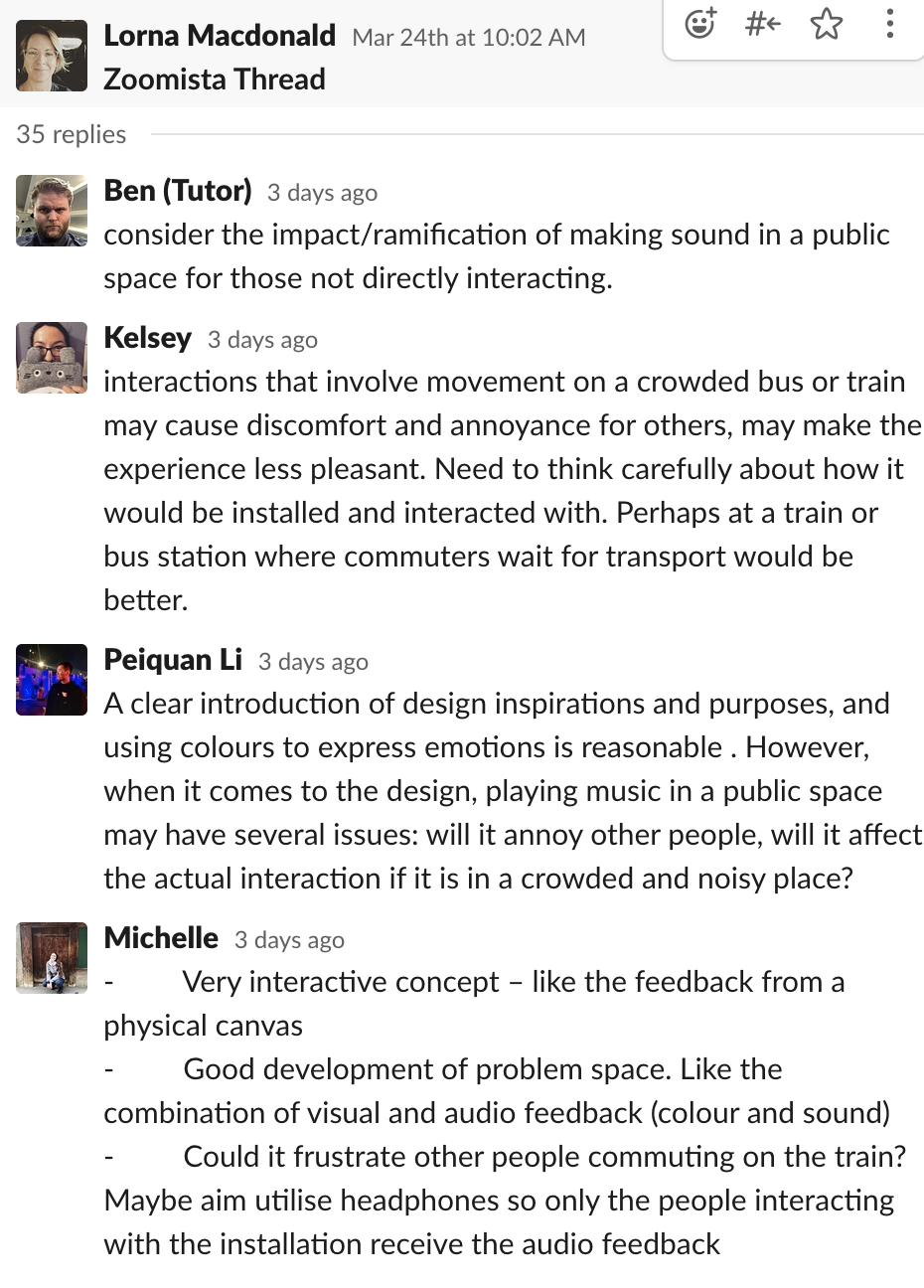 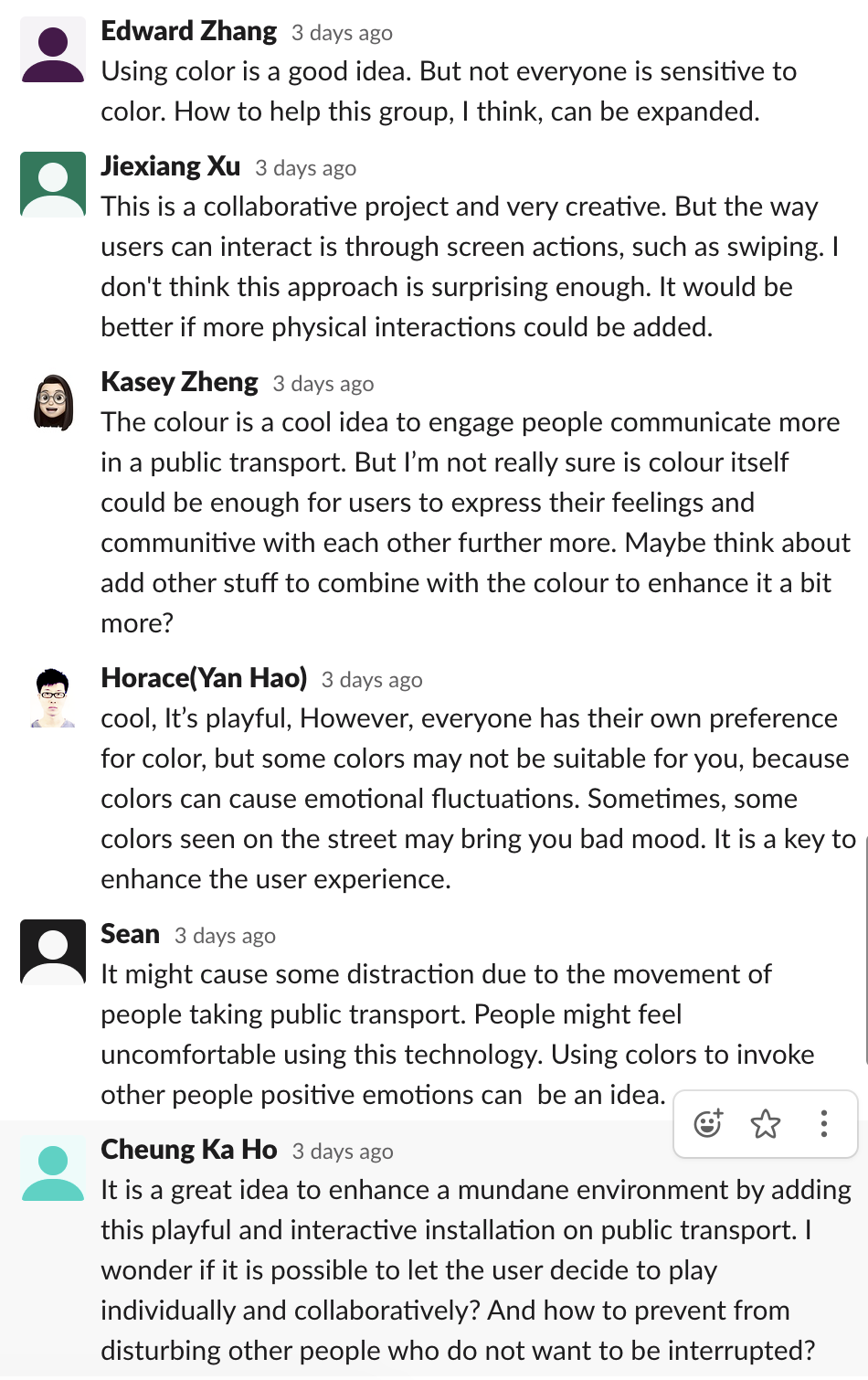 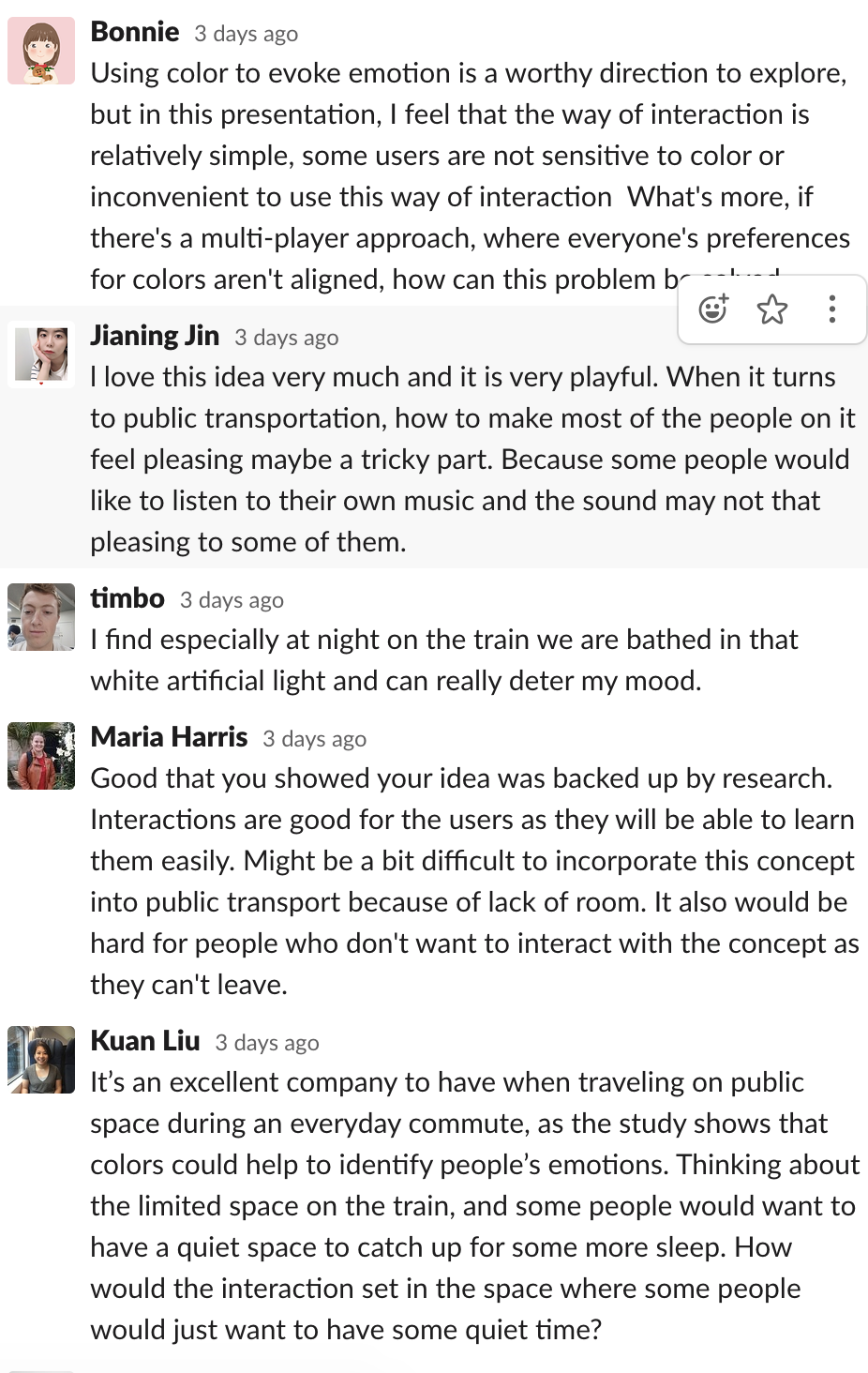 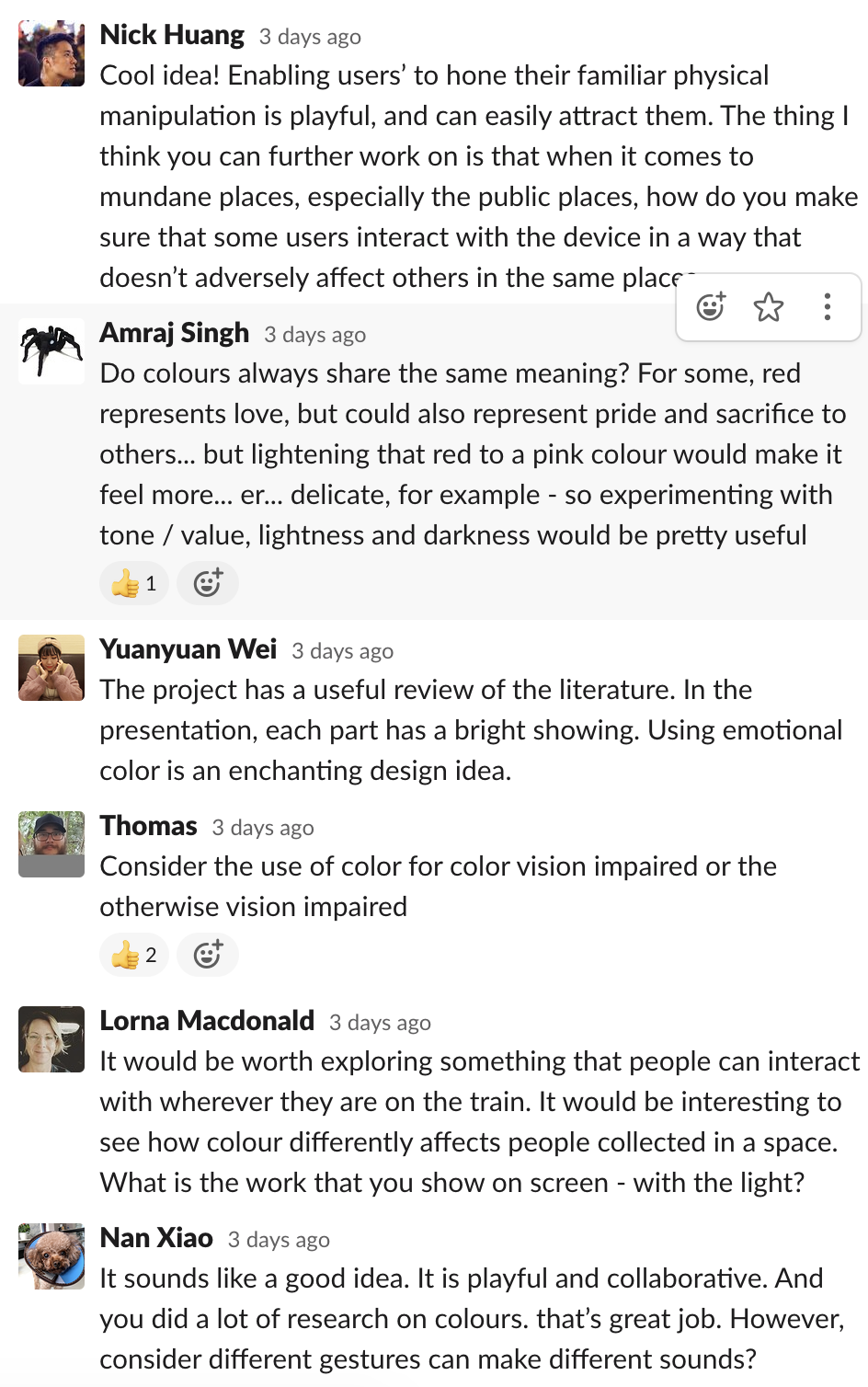 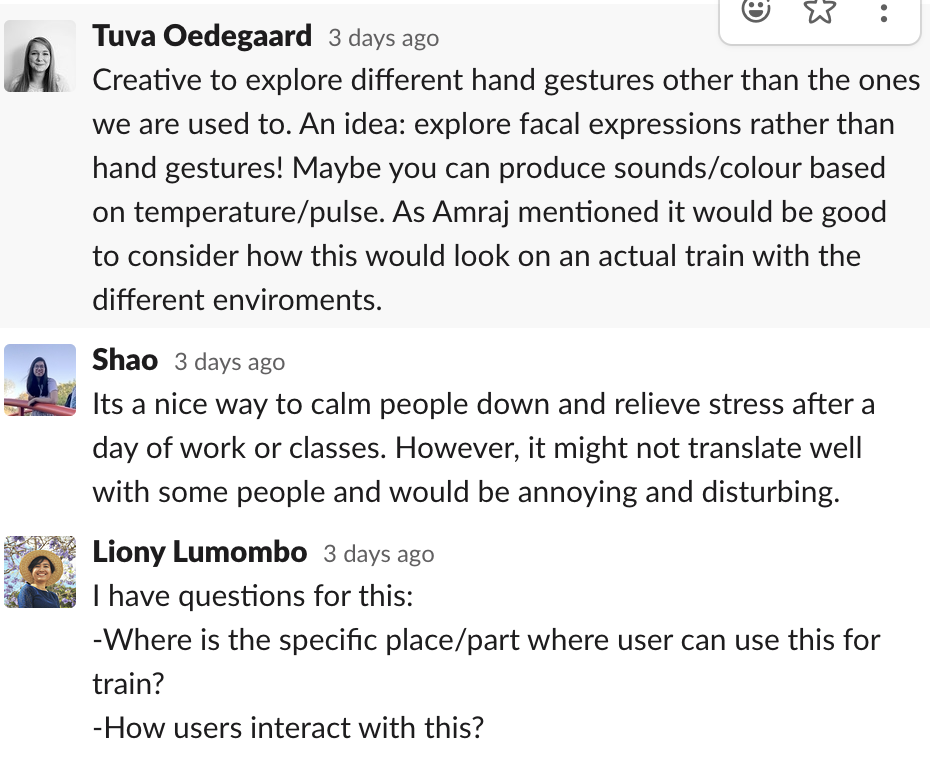 The most common feedback that we received was related to the possibility of our technology disturbing commuters.

The teaching staff suggested that we evolve Magical Points to a larger scale.

Tutor Alison and Tutor Clay misinterpreted our installation to be

To further prepare for the 10 minute presentation, my team will meet on Monday from 12pm - 2pm to solidify our proposed concept.

I interviewed five people and asked these questions:

Currently, there is speculation about the future of Physical Computing due to growing concerns about COVID-19. Personally, I am worried about the capabilities of this course transitioning to be exclusively online. Regardless, I am looking forward to working with my team!

I enjoyed reading the critiques from peers about Thinker-Painting.

Lorna proposed a fantastic suggestion! I had not previously thought about removing the visual display, however, by doing so, pre-perceived reactions could be avoided to ensure for exclusively genuine responses. For example, if I were to see a spiky texture, I may prepare myself.

I hoped to attend the UQ Innovate Induction on Monday, but since I arrived a few minutes late, my good friend John would not let me get marked off for the hand tool induction. However, I was allowed to attend the successive laser cutter induction, which provided me with immense insight on the multitude of programs that can be used to provide .DSF files for Speedy. 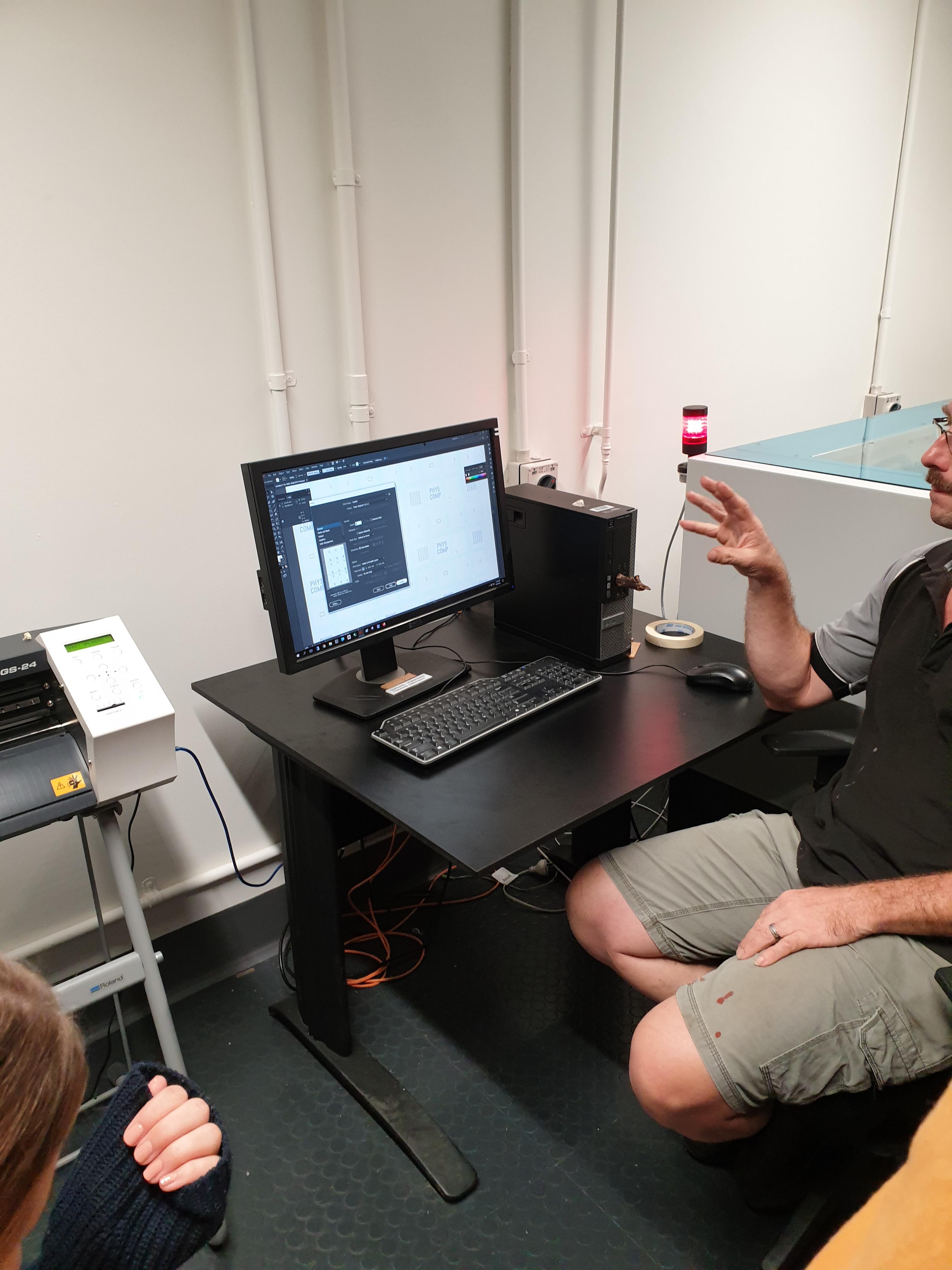 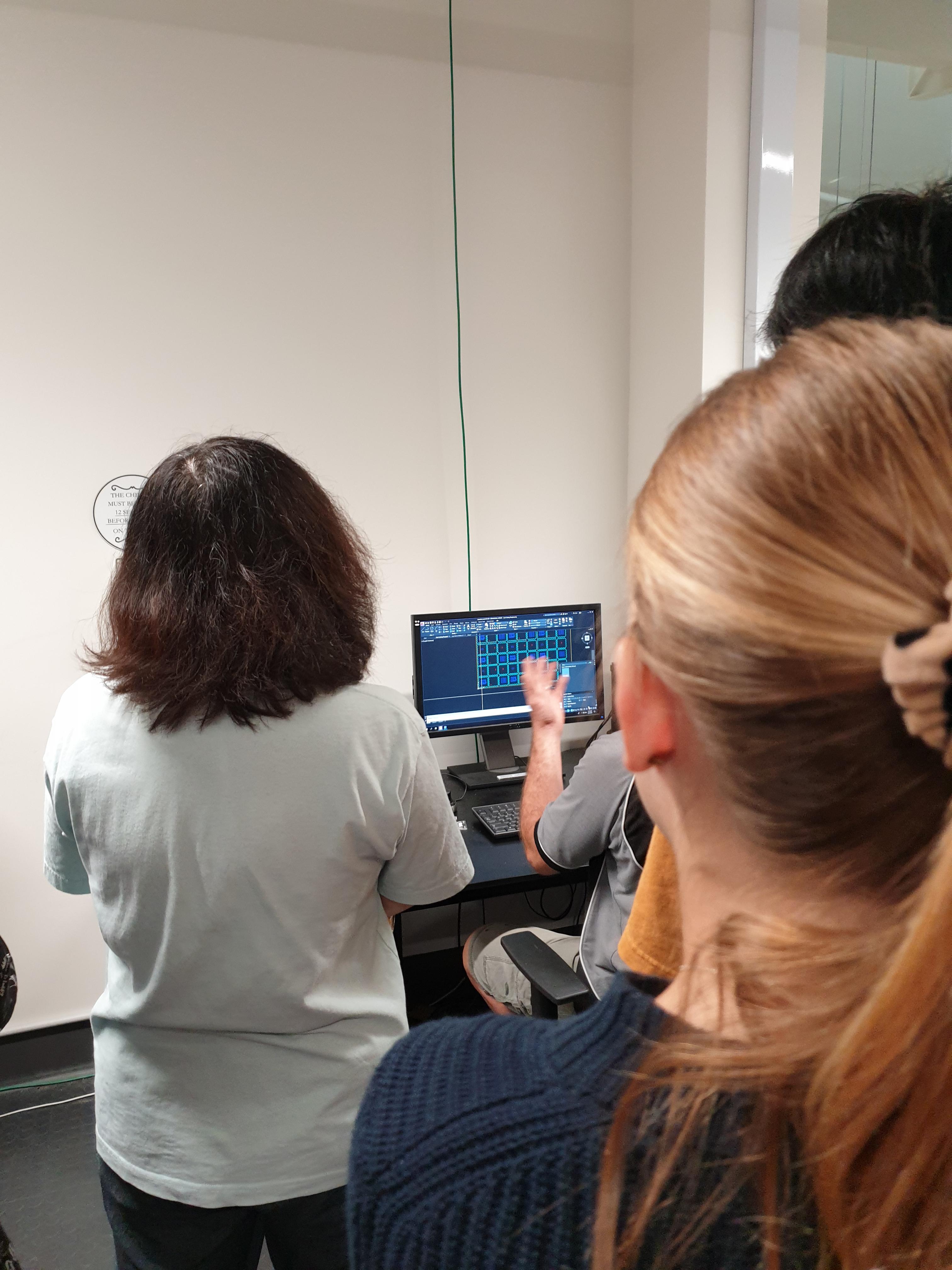 I was given five pieces of black acrylic that forms a cube when constructed. 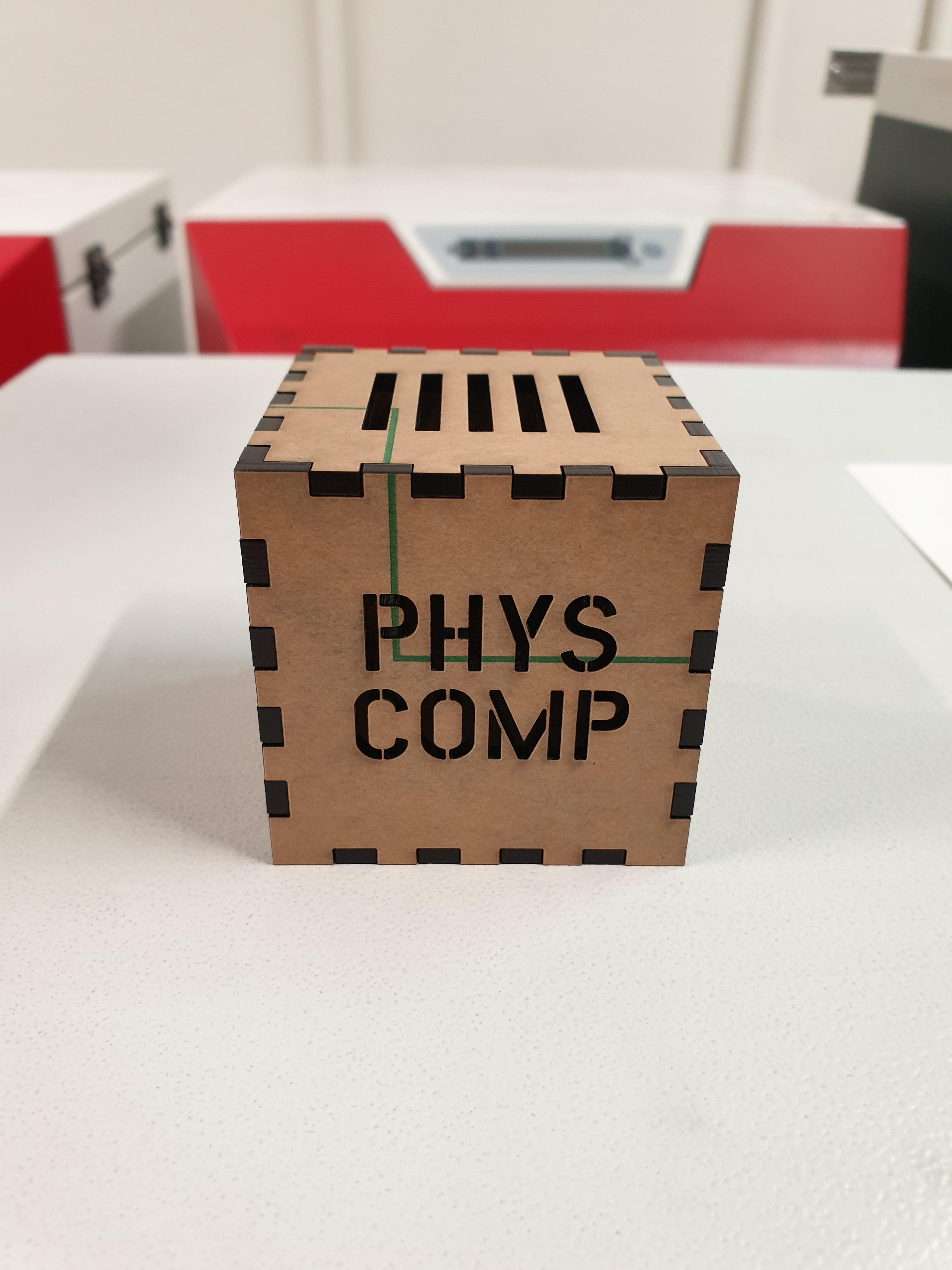 To formally complete the UQ Innovate Induction, I needed to go through the hand tool induction. This was completed on Tuesday at 1:15pm.

Most people in the class never heard of World Cafe. To my good fortune, I had endured the process of a singular World Cafe last semester (Semester 2, 2019). Consequently, I was familiar with the activity that we needed to complete.

The highlight of World Cafe was when I arrived at Enhance Mundane Spaces when Amraj S was the host. For that round I had mentioned the newly implemented Learners test (for driving). In my opinion, watching videos for multiple hours to learn how to drive and road rules could be considered mundane. It is possible that Tutor Clay had misinterpreted what I had said as he had suggested that the act of being in a car while driving is mundane. This is understandable as he and I both agreed that we often 'auto-pilot' and are unsure if we had ran a light (that was red, not green). Tutor Clay suggested that the inside of a car could be enhanced. Upon further reflection, I realised that anything in a car has potential to distract or disturb the driver from the road, and by extension, the aforementioned enhancement was discarded. 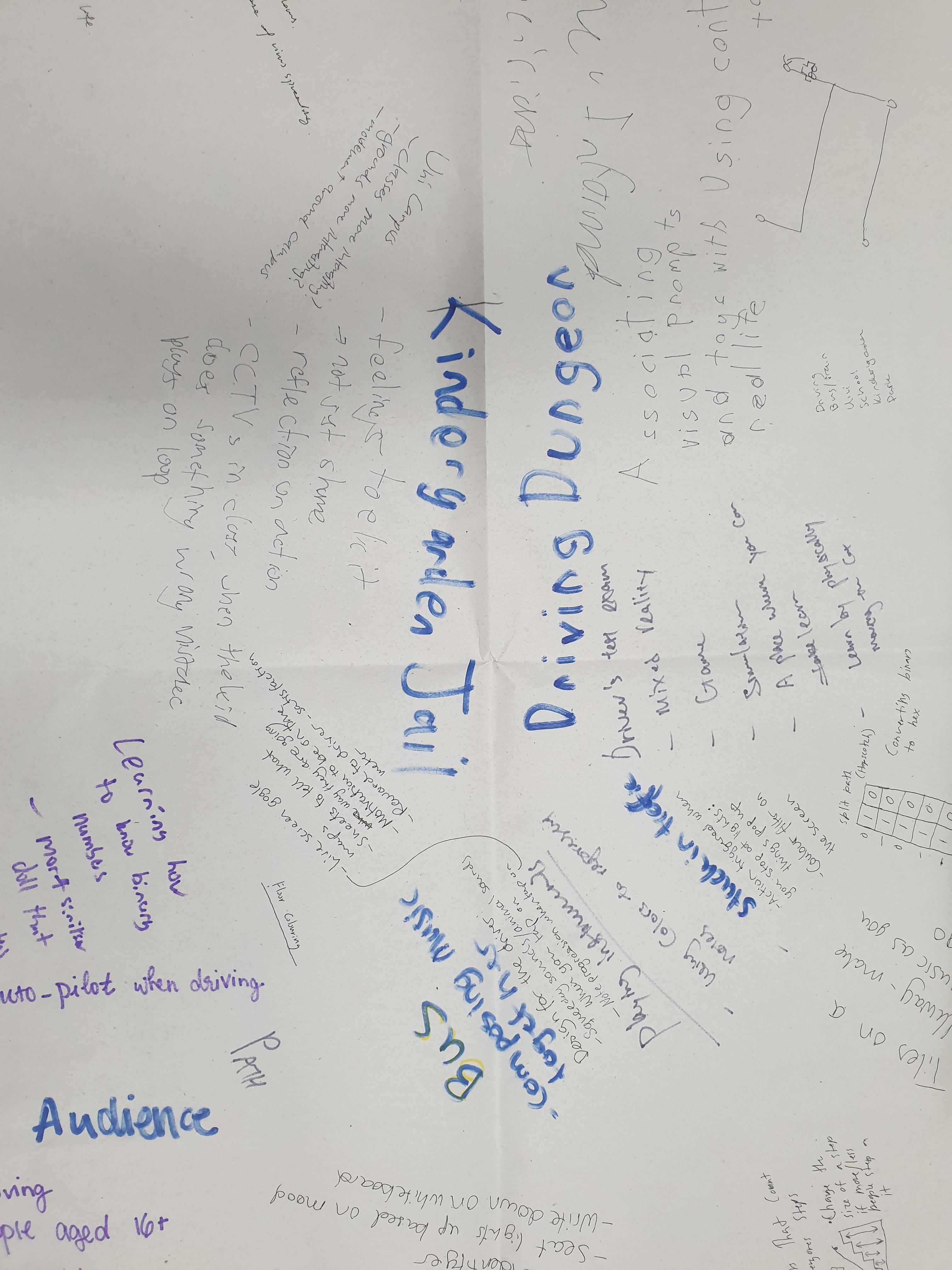 Teams were announced after the lunch break. I will be working with Jason Y, Rine L, and Jen S on the theme Enhance Mundane Spaces for this semester.

I participated with my group in an activity for a Student Staff Partnership (about DECO3850?). I was quite concerned with the host as he had inferred that an interview is synonymous with a survey. Regardless, I enjoyed the activity, but would have liked to be briefed on the purpose (or at least what it was for).

In the remaining hour, my team and I discussed the next steps for our theme. 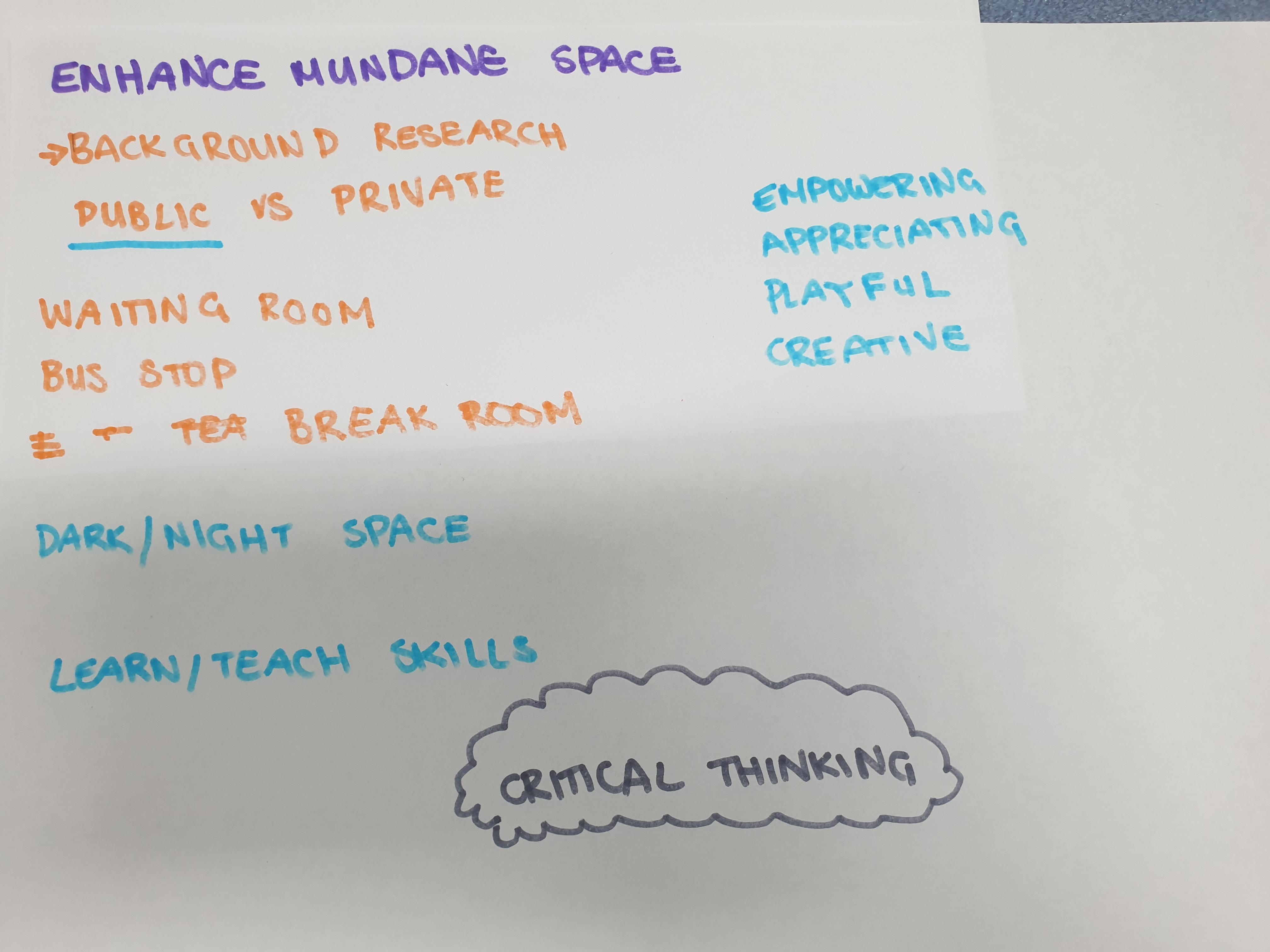 I was in the (un)fortunate circumstance of presenting first, and once I had completed my pitch, I felt extremely relieved.

Because I had already completed my pitch, I was able to focus and listen to the following presentations without being worried.

A few of my personal favourite designs were Mort.

I found the number of times 'Smart' used in the name of a concept to be amusing as most people used said word to describe technology that would passively sense human interaction.

I was quite concerned with some of the 'Smart' concepts, namely: the Smart Fridge and Smart Toothbrush. Personally, the electric toothbrush that I own is capable of all the technologies that were described for the Smart Toothbrush.

At 1:00pm I had the workshop area induction for 78-207. Although I had access to the work shop last semester (Semester 2, 2019) and still currently do, Steven's run through of the rules and hand tools was a fantastic refresher!

The last induction that I need to complete is the UQ Innovate Induction, which I have booked for Monday 9 March.

After listening to the pitches, each poster was displayed, themes were generated and concepts were collated together.

During this activity, a class mate had approached Jess to discuss the similarities of their two ideas. 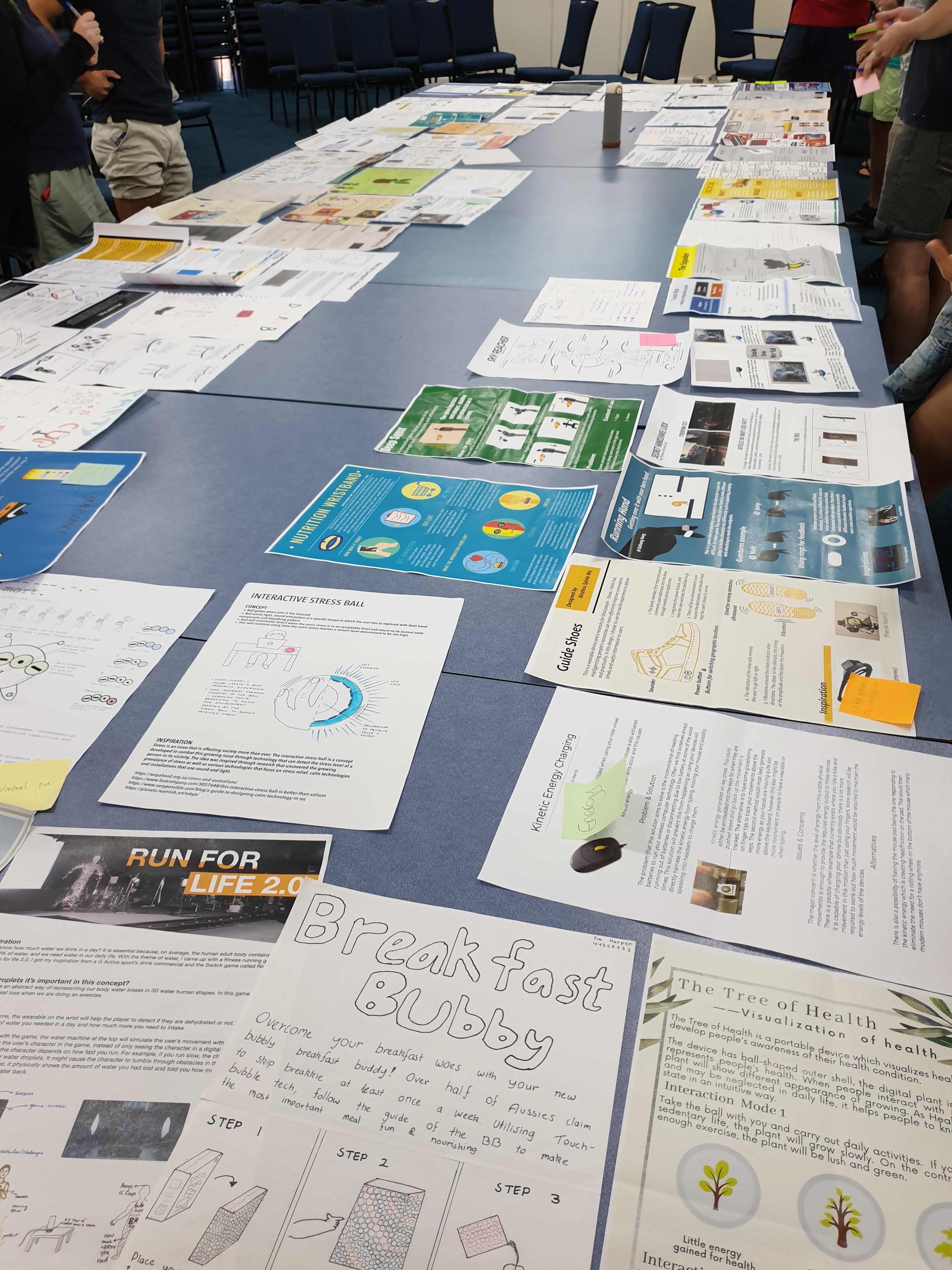 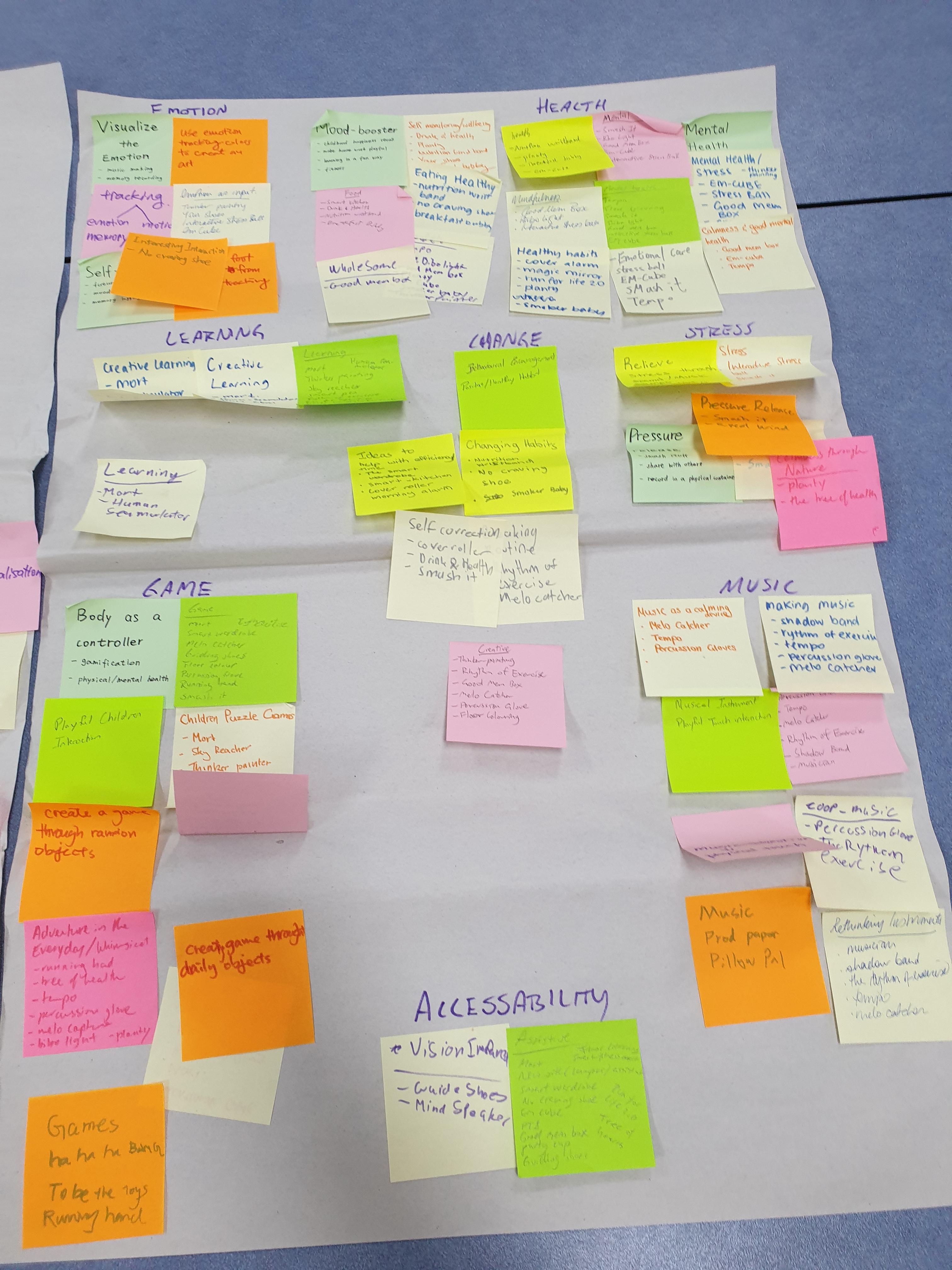 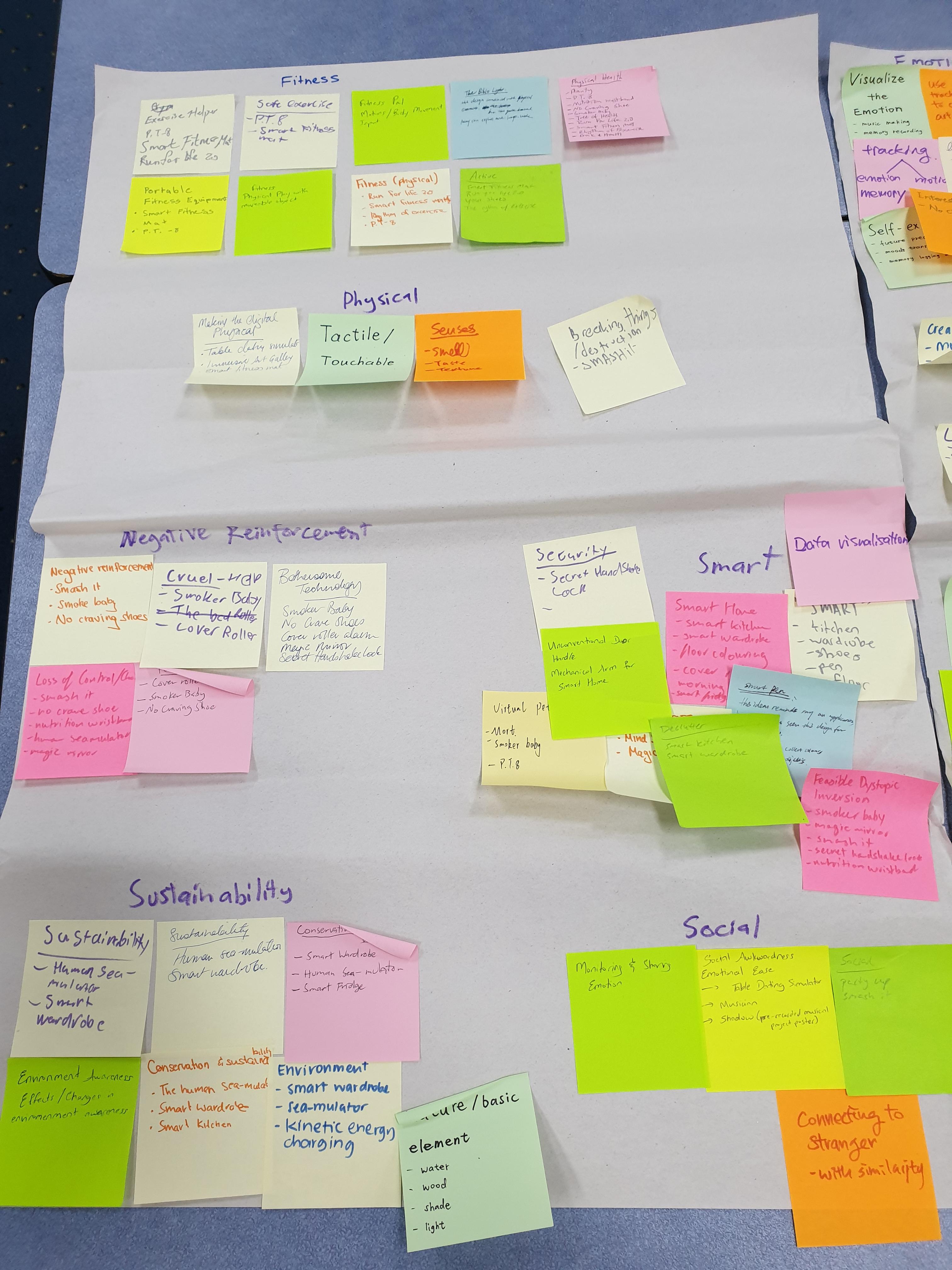 When each concept was placed under a relevant theme, it was easier to see the similarities that each concept had in regard to enhancing everyday life.

It was great to see the themes that had been produced the previous day (had missed this activity due to 78-207 Workshop Area Induction). 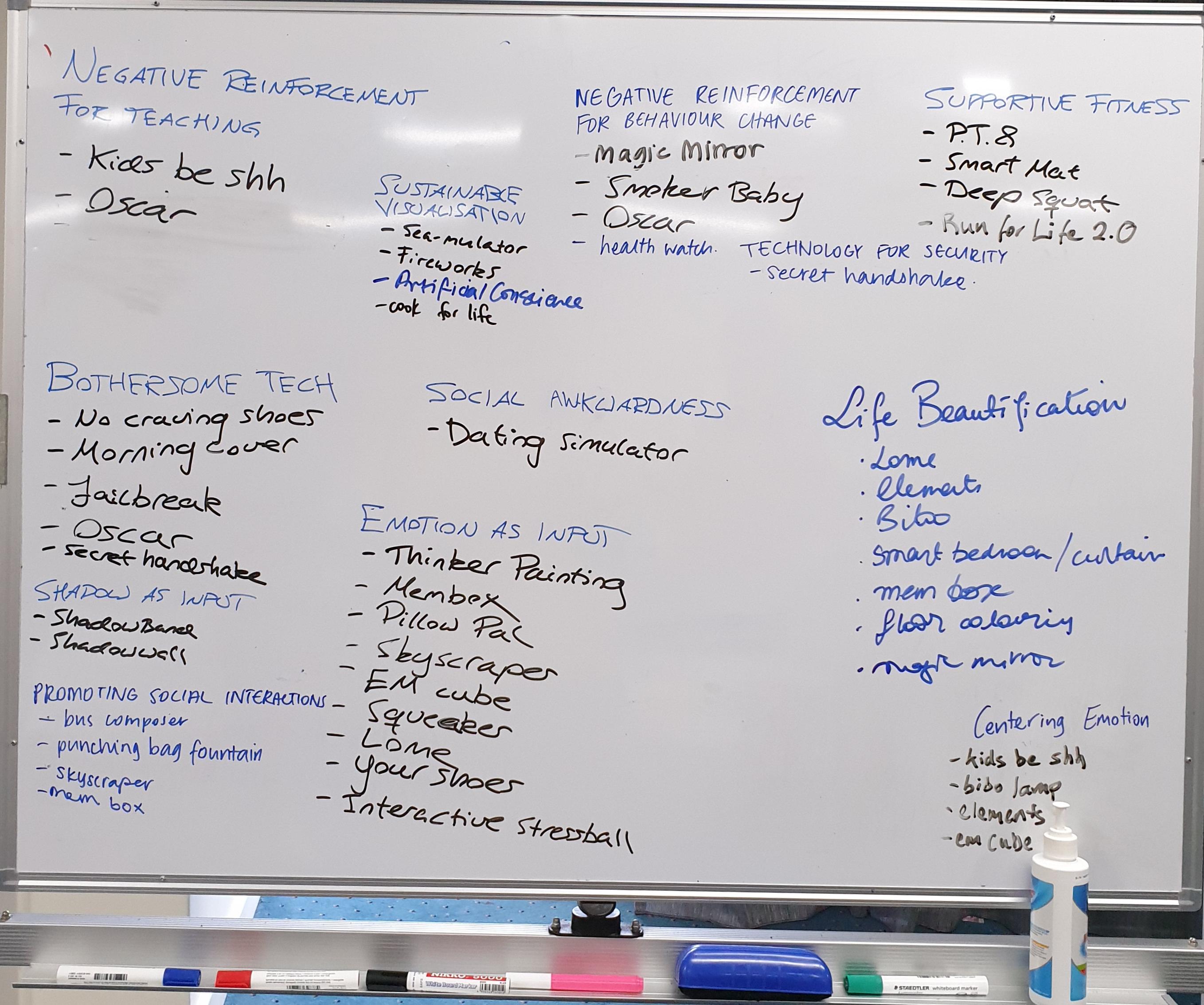 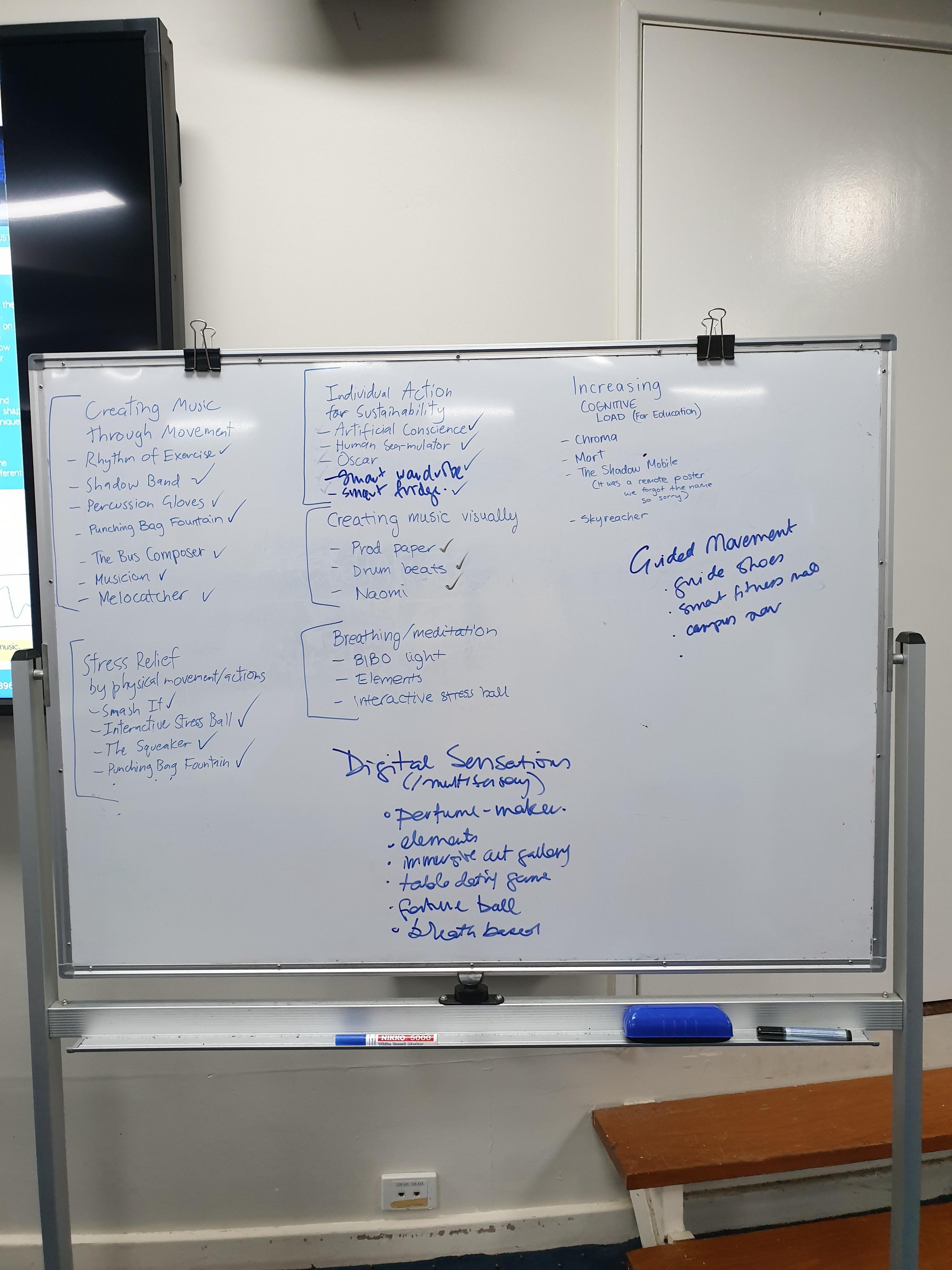 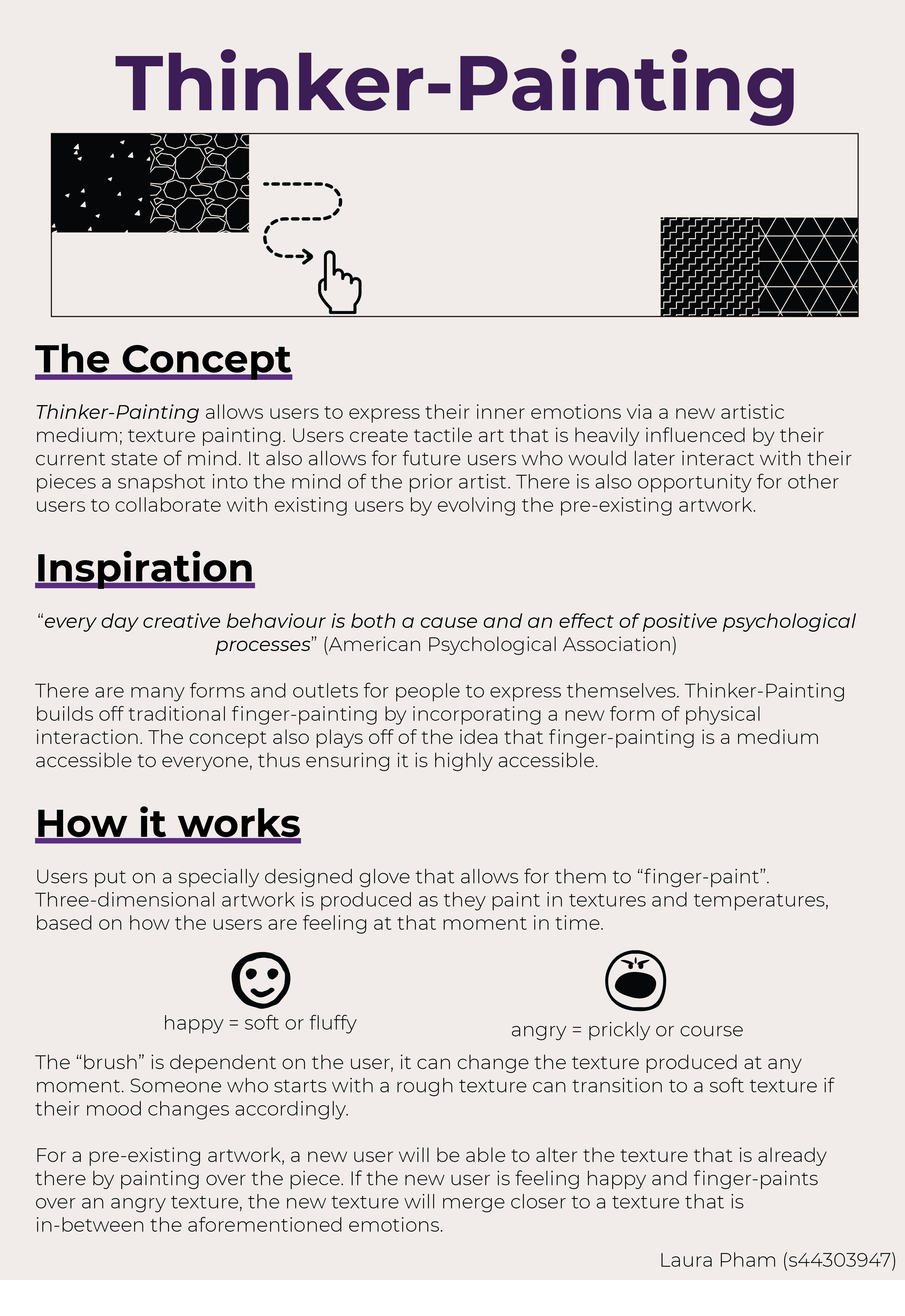 Thinker-Painting allows users to express their inner emotions via a new artistic medium; texture painting. Users create tactile art that is heavily influenced by their current state of mind. Thinker-Painting is designed to allow individuals with a new avenue for expressing themselves, allowing them to better reflect on their current emotional state. It also allows for those who would later interact with their pieces a snapshot into the mind of the artist. There is also opportunity for other users to collaborate with existing users by evolving the pre-existing artwork.

There are many forms and outlets for people to express themselves. These include, but are not limited to: meditating, painting/drawing, or listening to music. Thinker-Painting builds off traditional finger-painting by incorporating a new form of physical interaction. The concept also plays off of the idea that finger-painting is a medium accessible to everyone, thus ensuring it is highly accessible.

Users put on a specially designed glove that allows for them to “finger-paint”. They then finger-paint on a holographic board that is their canvas. Three-dimensional artwork is produced as they paint in textures and temperatures, based on how the users are feeling at that moment in time.

For example, if someone is feeling angry, the texture that is produced may be prickly or course. Whereas, for someone who is happy, the texture may be soft or fluffy. Since the “brush” is dependent on the user, it can change the texture produced at any moment. Someone who starts with a rough texture can transition to a soft texture if their mood changes accordingly. Temperature will also act as a distinguishing factor between differences in how the same emotion can be expressed, e.g., the difference between a cold or hot anger.

For a pre-existing artwork, a new user will be able to alter the texture that is already there by painting over the piece. Instead of simply replacing or masking the previous art, the new users creation will be influenced by what was previously there. If the new user is feeling happy and finger-paints over an angry texture, the new texture will merge closer to a texture that is in-between the aforementioned emotions. This would also be the case for the same user painting over their previous work. Other than wiping the board clean, there will be no erase option as its not in the human condition to simply be able to erase emotion.

I was assigned to the 6th Grand Challenge of HCI; Accessibility and Universal Access.

Clay spoke to the table to start conversation. There was not much disagreement on the demographics that were mentioned, with the exception of gender. Personally, I found that my gender does not restrict me from accessing technology that the opposite gender would have seamless access to. It was mentioned that online advertisements would be specifically targeted towards my gender (female), however, I disagree as advertisements are based off what I had previously searched before. For instance, if I had not searched anything, the Google would not be able to assume my gender.

It is important to note that I do use AdBlock, so it was difficult for me to fully resonate with online advertisements (I would only see them on my phone).

On the topic of the ageing population, Clay made an excellent point! I argued that the older population that struggle with technology are so as they are partially ignorant. Clay suggested that rather than ignorance, it may be that the younger generations are more mentally progressive and accepting of technology, in the sense that we were fortunate to grow up with technology and were able to see it evolve. 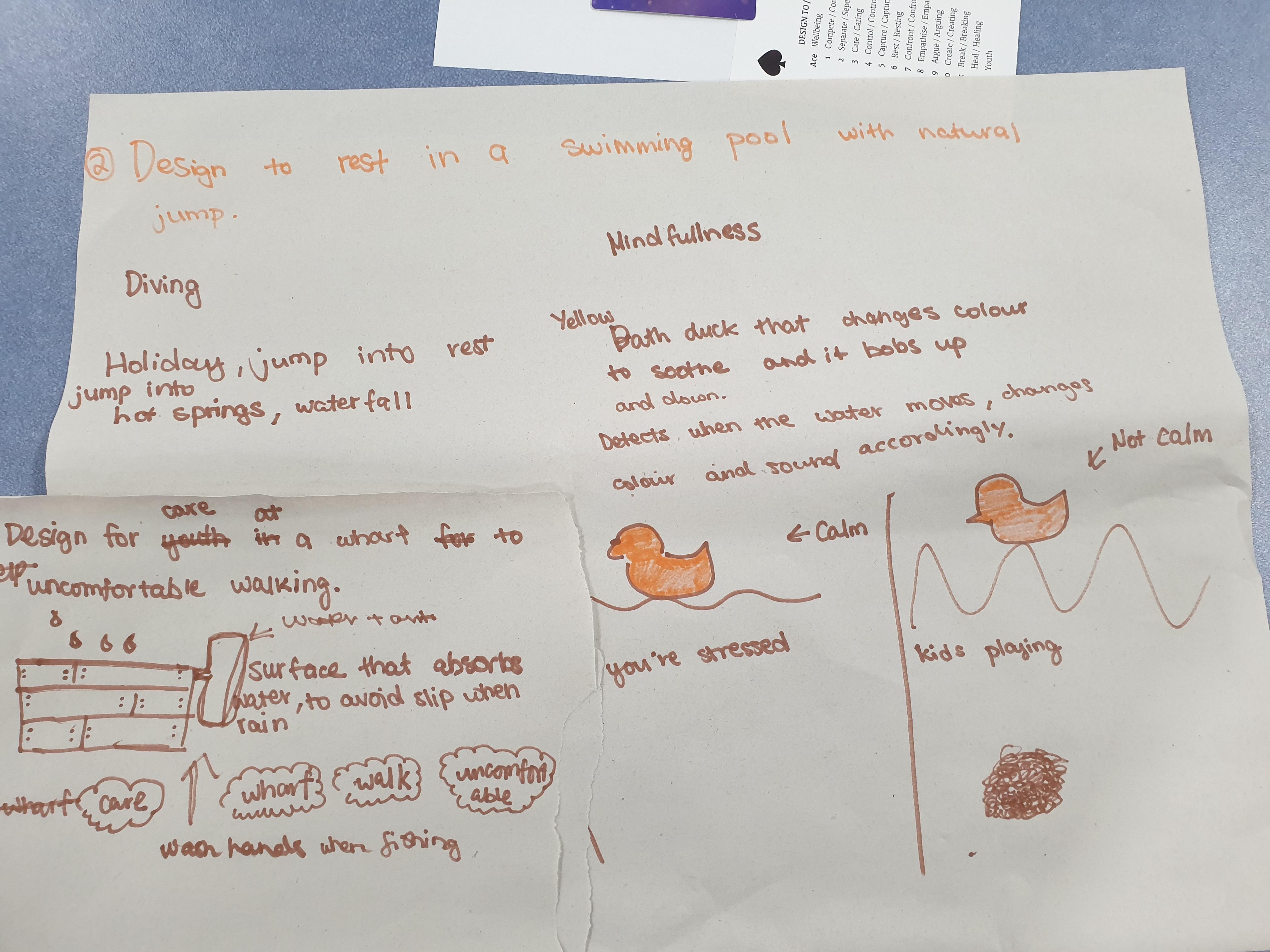 Initially, the Ideate activity was confusing, however, once tutor clarified the activity and gave an example of ideas that were not literal to the sentence, I better understood.

For example, I understood "jump" only as the physical motion. But it turns out that it could be used metaphorically; jump into the holidays.

At the end of the Ideate exercise, I learnt not to take everything as its literal meaning, and rather think critically to ideate on other possible meanings.

My name is Laura Pham.

This is my third year enrolled in the Bachelor of Information Technology, majoring in User Experience Design.

I enjoy collaborating with like-minded peers.

From this course, I would like to learn hardware, namely: Arduino.

I would like to utilise my knowledge of construction.