In this week's World Cafe, I analyzed the different themes and used them to find inspiration and choose the theme that I eventually wanted to do. After thinking, I chose the body as a controller as my first choice, followed by the creative design theme. Although I really wanted to do my initial design ideas, as a challenge, I wanted to choose a different area as a new development direction, because When analyzing the subject of body as controller, I thought of designing with sound or touch, because the sound is also part of the body. Interacting with sound is a very new way of interaction rather than confining the mind to a certain body. On each part. At the same time, we think of fitness themes, games that help fitness, such as touching the hinted area with your hand in a limited area, similar to the palm touching the ground in aerobics, and allowing users to achieve their goals through physical activity. In this Wednesday's group grouping, the topic I was assigned to was Body as controller. Unfortunately, the areas that our group members are good at are design, and programming is the weakest part. But it doesn't matter. I chose this course to improve my programming skills. So in this project, I will do my best to learn programming and raise my programming level to a higher level, and try to implement all the functions in the design as much as possible.

However, because of this epidemic, our group chose online video conferencing and chose Friday afternoon and Sunday morning as our meeting time. But before our final concept was finalized, we fell into a design bottleneck, because we find that the theme of body as controller is somewhat restrictive, especially many of the themes we want to do have been developed by major game companies, etc., which makes us more frustrated.

But then we chose to use brainstorming from different groups (persons with disabilities, developing children's creativity, children with ADHD, children with autism, etc.), body parts (head, eyes, arms) and five different senses: detailed classification (touch, sound, vibration, blinking, etc.) so we ended up with a lot of interesting ideas

In this week's soldering instruction class, we learned how to solder and some things to pay attention to during soldering. I already touched the circuit board connection when I was using the deco2300. One of the biggest points in this welding practice is that I can't ensure that more complex lines can be connected together in the physical design of the project. In this week's class, I listened to everyone's speech, and evaluated and dig deep into the content of the speech and poster design. So in this class, I got a lot of interesting and weird ideas, such as smoking baby ideas. At the same time, I found that some students overlap in the design of ideas, such as the virtual dressing projection technology designed to save dressing time. In fact, I have seen this idea on the deco2300, but unfortunately, the final product was not Designed, I think this is a very creative idea and I like it very much, and I am looking forward to seeing the finished product design this semester.

But I don't quite understand the content of some speeches, because too short statements lead to not too much pavement to explain why it is designed in this way, but only designed for a certain needs of people. But in my opinion, technology is to assist people's lives, not to design some products that users need, but to add more complicated processes to them. At the same time, good design needs to have the ability to promote users to use it. It also needs to select targeted groups. A design cannot be designed just because the user needs it.

In the second half of Wednesday, we categorized ideas based on those design ideas, such as health, change, stress, music, accessibility, game, learning, etc. (A wearable device for the blind)

Although the guide sticks have gradually become intelligent, I find that blind people are a fragile group as a special group. Not only are the young people in the blind group, but also some of them are blinded by various accidents in the later stage. They have difficulty accepting the blind's living habits for a period of time after blindness, and even feel that using a guide rod is a disgrace. Their emotions are richer and more self-respecting than the average person, and they do not want to be labeled.

Create a safer external environment for blind people in multiple dimensions and greatly improve travel efficiency. Have considered adding a warning light to the shoes [but not put it in the final design], although I think this can not only improve the convenience of the user but also warn others

When the visual senses are occupied, the stimulation of other senses will be more sensitive, so I choose to use the vibration in the sense of touch to deliver useful information to the user in time. 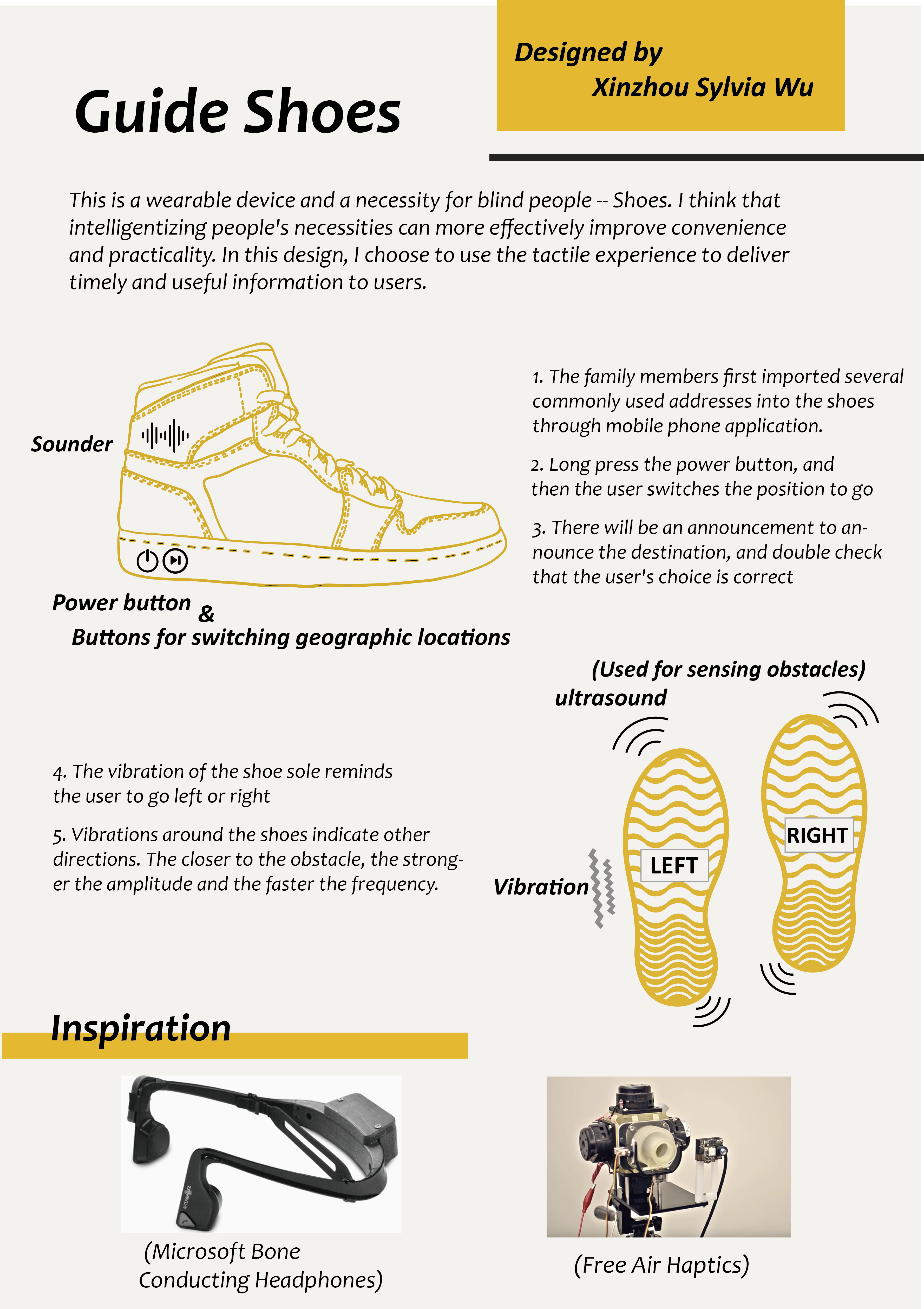 The bone-conducting headphone allows blind people to feel specific directions through sound and summarizes specific situations to remind them.

My opinion on this design: Because I want to create multi-sensory designs, I hope their senses can combine hearing and touch. Instead of isolating them from the outside with headphones, this may miss some reminders of pedestrians, etc. (even the precise technology will definitely have an emergency situation) Hi, I'm Sylvia. I am a 3rd year BIT student (majoring in Software Information System and User Experience design). In the past two years, I have studied courses such as DECO2500 (Human-computer interaction), DECO3500 (social & mobile computing) those courses gave me a deeper understanding of user interaction design. This course combines physical construction and interaction to allow I broadened my perspective on design works and this course has a relatively large demand for programming skills, so, in my opinion, this is a good opportunity to improve my programming skills, and it can deepen and strengthen the knowledge of Arduino I learned in the deco2300 class. This course is a 4-credit course, so I need to spend more than twice as much time as usual. I can also have more time to improve this project and make it as best as possible. At the same time, I hope to design an interesting project with the team members.

In my spare time, I like to do handwork and graffiti. I will also consciously start to cultivate and improve my aesthetic concept and sensitivity to design (browse design works such as Behance, etc.). What excites me most is that I have the opportunity to use tools that I don’t usually have access to and can increase the applicability of my physical work.

In this week's studio class, our team discussed Challenge 2: Human-Environment Interactions, which added inspiration to my design idea. talked about how technology can help vulnerable groups in society, which inspired me to design ideas, it reminds me of deaf people and the importance of sign language to them. In the next two days, I will search for related technologies and start to design my poster.