That week when we submitted our team report, the team discussed what should be the primary team problem space, solution space, target audience and other details etc… In a nutshell, each one of us in the team will be focusing on creating a “thing” that could help university students relieve study stress, via physical activities whether it is considered sport/exercise or not.

We chose option 2 as our direction to go for, in which we decided to attempt the same concept mentioned above, audience who are uni students, but different intended experiences / specific kinds of students (postgrad/undergrad, full-time/part-time etc…) / context of use (home/school etc…).

Without any rambling and digressing, here’s the “brief and concise” description of my concept :

The focus of my concept consists of two major parts, including obviously stress relief which is our team problem space, the other part is the socialising aspect as written on my individual part of the team report.

I did some background research on how socialisation relates to university students and stress relief in general in the individual part of the team report, and that it gives me some insights in regard to my “more specific” target audience I could choose to focus on instead of targeting “every kind” of university students.

Since it is especially common that people do their degrees remotely in universities, it is easier for those remote students to neglect the socialising aspect that attending classes in person could offer, studies also show link between socialisation and stress relief, hence it gives me ideas on choosing socialisation as one of the aspects I would like to focus on on my individual project.

Neglecting all limitations, my concept would achieve :

This week has two major activities which were world cafe followed by team allocation, in world cafe we get to participate in discussions regarding to themes categorised from the presentations we did in week 2, discussions we as groups did were quite freeform, we talked about how the ideas on the table could be something else that enhances certain user experience.

Body as controller was one of the themes (it’s also the theme that I want to pick as my project theme the most) that I was in a group of 5 to discuss about what kind of experience the ideas can stimulate for users, we talked about the social aspect and how it could be better with the example of one of the amazing ideas on the table (glove percussion, it is an idea which users can put on a pair of glove and generate the sound of percussion of different drums with different hand movements / gestures.)

And how the idea that we picked enhances its social aspect? We thought about another way to use it is to allow users to use not only a kind of instrument, but it could also be anything such as electric guitar, bass guitar etc… Besides it allows users to jam a sound as a band remotely without physically being in the same room.

Best news was that I was allocated to “Body as controller” (hooray!!!!), whether the concepts we discussed about in the world cafe will be in our actual project, I am not sure, but definitely It would be one of our inspirations generated as a team.

Congratulations to me to be allocated in a team of 4 working on “Body as controller” which I (sorta) had experience before with Arduino in DECO2300, where I made a glove to controller the left and right in a game.

On the day we were allocated as a team, my other 3 amazing teammates also came up with an potential idea to be presented in week 4 or even picked as our project idea. Which the idea was a game that players can play as a god in a world where he/she could literally destroy/fix anything in sight, the equipments needed are still being considered whether it is to be on VR/AR or just a screen.

We all had experience using Unity, 3D modelling, C#, Arduino and etc, however we are open to learn and adapt new things depending on what out concept will turn out to be, I’ll stay tuned for that.

We are also going to have our first team meeting for the presentation in week 4, where we will talk about the work allocation as well as refinement of the concept that we have developed so far.

And then we also had Mr. Bash talking about his experience of getting a job, mindset and tips that we will need after we graduate. This had me actually thought about what is my selling point and uniqueness when I compare myself with other IT/multimedia graduates, definitely it’s not all about technical skills because this is something that there always is somebody who is better, nor it is about your ideas/brilliant mind unless I am going to be an entrepreneur, surprisingly it is more about the simplest thing you can imagine, a likeable personality (which I was not born with and am working on).

lots of ideas presented were definitely creative and useful if It were to come into life, however many (including mine) tend to develop from a thing / an object that already exists, in the example ideas that Lorna posted on blackboard on the other hand, are completely new and unique, at least I personally wouldn’t thought about those until I saw them.

So instead of going towards the direction of enhancing / upgrading an exisiting object, personally I’d think inventing something from scratch that isn’t based on any pre-exisiting model would be much more interesting and flexible. In my opinion, we tend not to think out of the box because we are surrounded by everyday objects, interacting and seeing them over and over again, therefore so are our minds.

A majority (including mine) of the ideas has a focus on enhancing everyday life or experience, some rare qualities of an idea such as playfulness, novelty, open-endedness, tend to be neglected, which is not a problem because enhancing everyday life is what humanity should always strive for, but I’ve not seen an idea which is a combination of those values, which is fun to interact with, useful for people’s experience/convenience, caring for people’s feeling etc… Fortunately we could combine different ideas from week 2 to develop one that has all the values mentioned in the next week.

I was introduced to soldering on Tuesday, although I was not completely clueless about what it is and why it is useful. The techniques and safety measures that were taught in class definitely was new to me as a third year student who is more interested in software / web based projects than physical computing’s.

Arduino was what I used in DECO2300 but it was nearly a year ago and due to my lack of interest in physical tech the soldering session was certainly refreshing and useful if I want to get through the course. 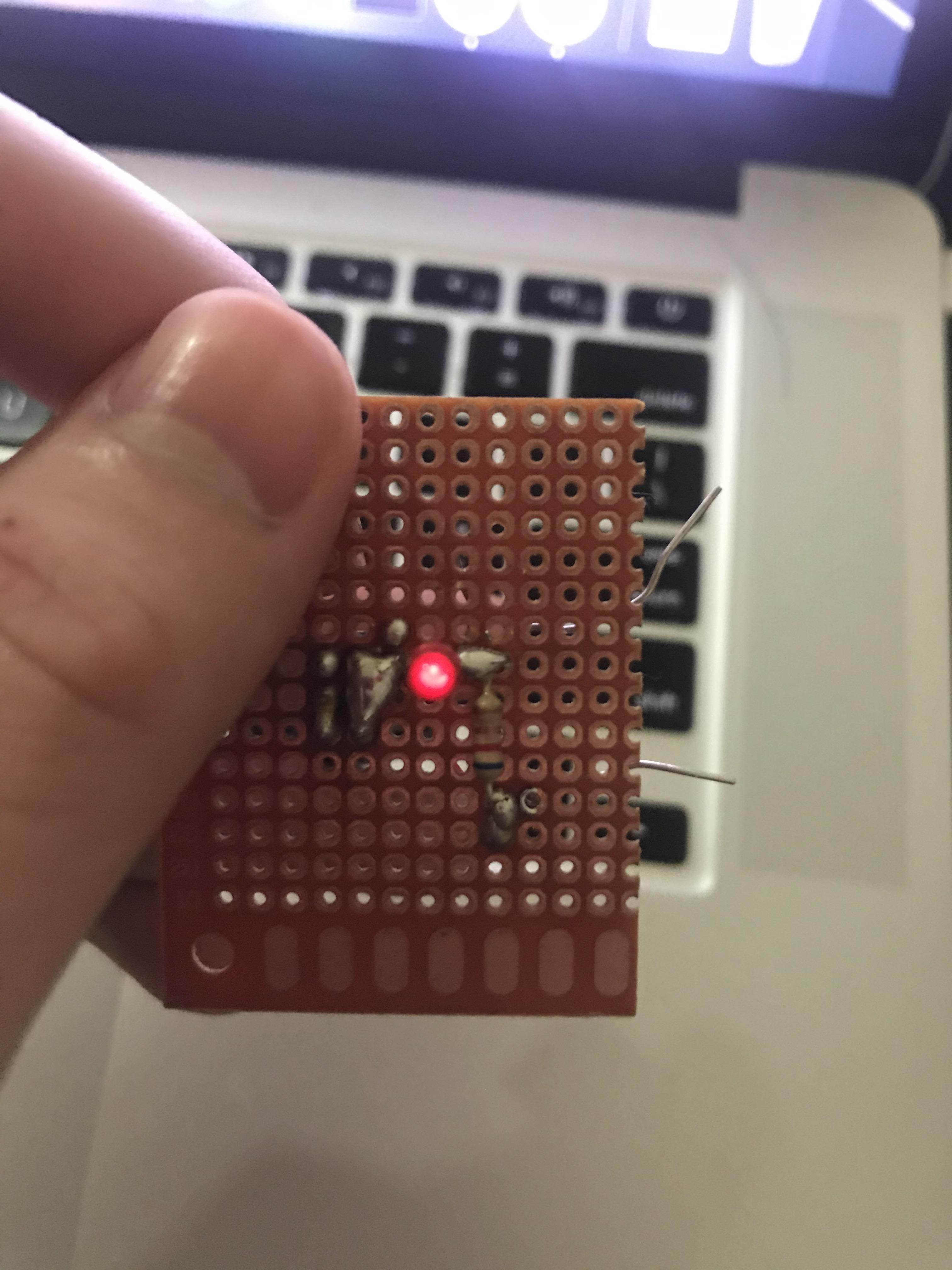 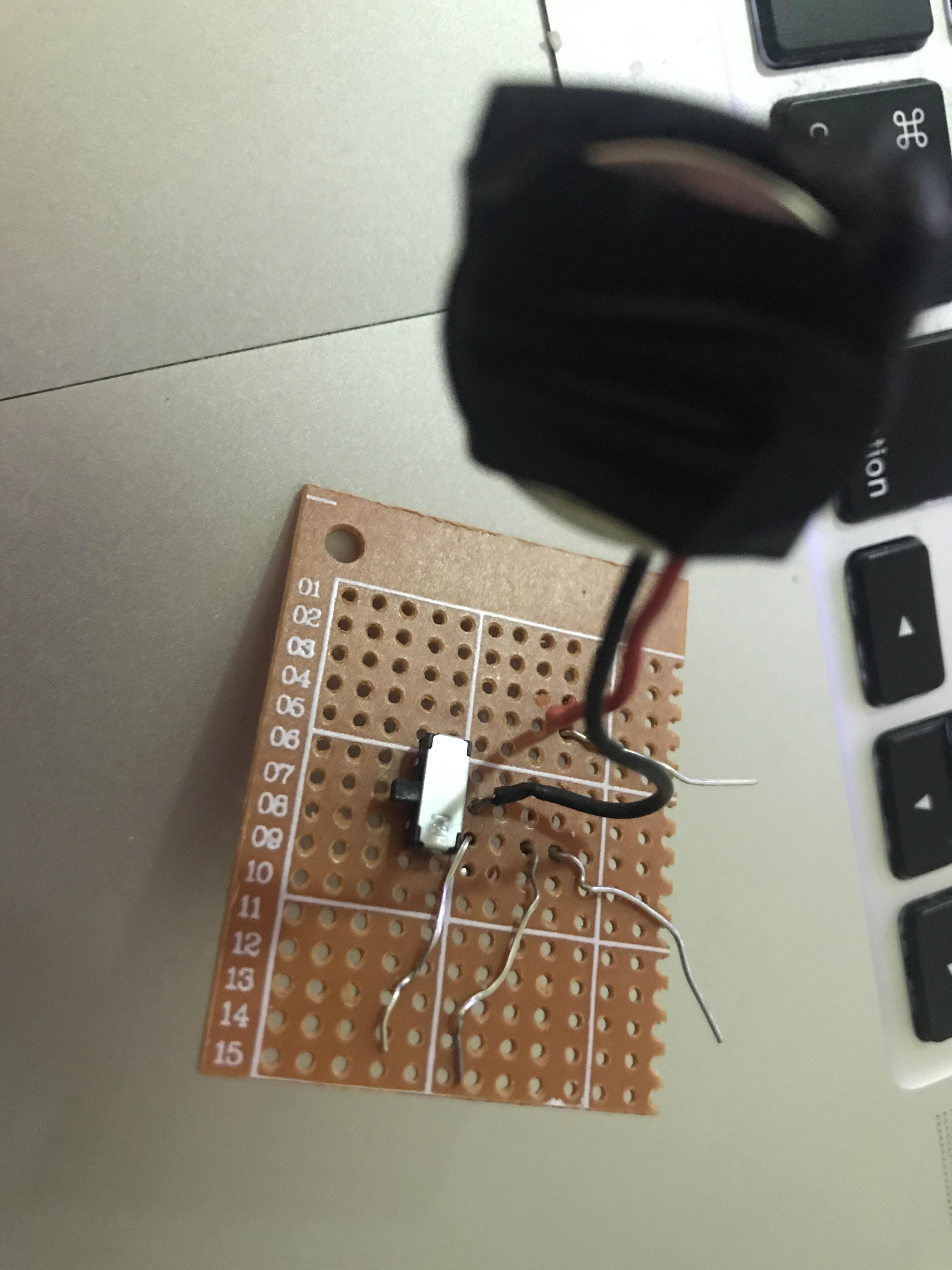 Safety and rules introduction of the room 78-207, things to remember :

etc etc… a lot of them are common sense.

In the second week of the course we went through a ton of presentations, be it live or recorded. Even though the course makes me get up at 8 in the morning, it was absolutely worth the struggle after listening to so many inspirational ideas.

I signed up to the course late so I had absolutely zero idea what was going on in the first week before drowning in the sea of content and announcement published on blackboard right after I enrolled.

Unfortunately though I could not participate in the theming part of both Tue and Wed sessions because I had an induction session to attend plus another that I missed in the first week, It’s been hectic for sure for only the second week of the semester. The good thing was that I was inspired by several ideas presented throughout the week, which certainly will affect my decision on project theme selection in the following week. 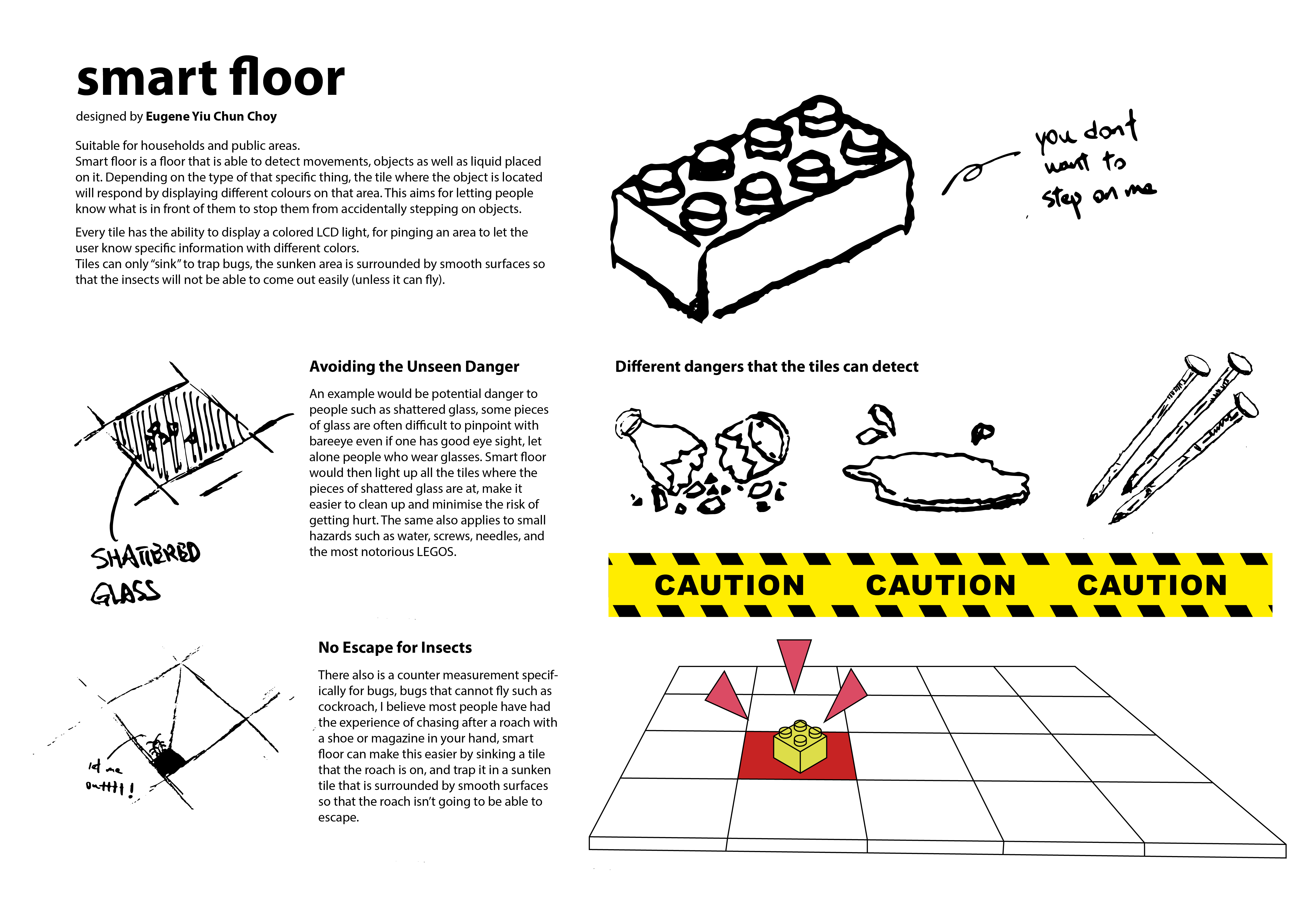 Suitable for households and public areas.

Smart floor is a floor that is able to detect movements, objects as well as liquid placed on it. Depending on the type of that specific thing, the tile where the object is located will respond by displaying different colours on that area. This aims for letting people know what is in front of them to stop them from accidentally stepping on objects.

An example would be potential danger to people such as shattered glass, some pieces of glass are often difficult to pinpoint with bareeye even if one has good eye sight, let alone people who wear glasses. Smart floor would then light up all the tiles where the pieces of shattered glass are at, make it easier to clean up and minimise the risk of getting hurt. The same also applies to small hazards such as water, screws, needles, and the most notorious LEGOS.

There also is a counter measurement specifically for bugs, bugs that cannot fly such as cockroach, I believe most people have had the experience of chasing after a roach with a shoe or magazine in your hand, smart floor can make this easier by sinking a tile that the roach is on, and trap it in a sunken tile that is surrounded by smooth surfaces so that the roach isn’t going to be able to escape.

I spent most (70-80%) of my time trying to make one of my discarded ideas work, smart bed was the one I was so stubbornly determined to work on, unfortunately the features I could think either does not make much sense to me or it is already out there.

The initial thought was to design the bed to detect user's movement on it to perform different types of services, such as switching the lights off when the user was detected to be asleep, tune the music down and so on, however if I were the user, most likely I would just use voice command to turn off the things I want to turn off, which voice command is already out there.