Since we didn't think we could get our larger FSR sensor delivered on time under current situation, last week ,we are focusing on finding alternative for the FSR sensor. The alternative have to meet 2 requirements:

The tutor suggest us to use Wii Balance Board(WBB) which is a controller like thing for the wii console. We buy a second hand WBB last week and start to study how to make use of it. WBB is just like a weighing scale, it have 4 sensors inside the board, work just like a FSR, a better thing is, it could detect specific four parts of the board, on which the user is currently standing on.

So, the next week we will go back to mechenical solutions, to try to use mechenical design to match the detect range of the FSR and the weight of people, and I will also try to use some simple CV to try to read the data from wii-scale software.

The code could be divided into 3 parts, codes in Arduino IDE, code to receive data from Arduino, and code to convert and play out as music.

The code in the Arduino UNO is just a simple could to print out the serials data of the FSR.

To output the music notes and chords, it's essential to define music note as a Class in the program:

The midi signal is formed by several numbers, each music notes was matched with a certain integer, we have middle C(C3) match with 60, and we could easily know the other numbers.

Use rtmidi to send virtual signal to music software.

A music note played with midi is based on following parameters, the certain note that is going to be played, velocity of the note, and duration. The duration is actualy not a independent parameter, the whole signal if formed by Start message and End message, the start message define the time start to play the note and the end will stop it.

Converting data into Drum Beats is based on following code:

when the read data is larger than 500, the program start to send a start message of a drum beats and if it drop under 500 send a message to stop it.

We pre defined some chords progressions for testing, it should be able for user to change it.

The velocity of the chords is based on the pressure use placed on the sensor. Each time the system detect a "Press" action, it will change the chord to play.

This week we were planning for our final prototype, we are going to combine our work together for the exhibition. Our final prototype will be an installation in a much larger scale than teh current one, so we will need some more materials.

We discussed the form our prototype will be. There should be a structure to contain all the sensors and wires inside, and should be stable enough to allow our user to stand on. It should be like a "Box", the FSR sensor placed on the top of the surface, and LED lights on the bottom side. The top surface should be transparent to allow the light comes out. So we considered Acrylic Board. Also it should be structed on its edge and corner a little bit higher than the ground to allow sensors and wires stuff.

For the comming weeks, the focus of the work will be deciding "how we are going to allow our user to switch between different types of exercising". We could have a switch for our user to switch themselves, we could also have the system to detect it automactically, however there are still things need to be considered.

If we have system detect it automatically: there will be a lot of code work, and I am not sure whether we could carry it out, it may involve some work concern machine learning...

If we have our user to select themselves:We need to find a way to allow our user select the type of exercise, we don't have buttons, switch nor remote or touch screen, so it might be related with the sensor, but we still need some user research to support our idea.

This is week I got a cold and spend most of the time resting in my room.

In order to discover the possiblity of using mobile devices as data collection and user input methods, I tried to learn the coremotion framework, which is a frame work in iOS platform, but I defined following challenges of using it:

There are also advantages of using it: the data collected will be easier to exchange to other components and analysed as output.

What is your concept / individual focus / individual responsibility for the project? Include a text-based description and imagery to support (sketches, photos etc).

My individual focus in our team project is, to design an implementation that could recognize what kind of exercise the user is doing and transform data collected from user to music output as feedback.

If I have all the resources I want.. I would want to build an exercising yards with different exercising instruments with sensors planted in. Those sensors could collect data from user and give those data to the software which would transform data into music and output to user.

At the weekends of week 4, our group have a zoom meeting, discussed what we are going to do in week 5. We devided the writing work of our proposal, and what specific aspects each team member will focus on. We read the feedback from the week 4 team pitch try to think about what kind of changes we could make to our concept based on these feedbacks.

According to the current situation, its impossible to conduct any face to face user research, I tried to gather a few people in a group channel and have a free chat and tried to get some general ideas about our concept. However, unlike in the real world, it was really difficult to hold a discussion online, the focus point of the discussion soon changed to some very detailed questions(maybe because the participants are mostly college students in engineering). The talked about how to translate data into sounds. Because a clip sound wave have three variables: time, frequency and volume. While the data we got from the user only have two, time and pressure. Therefore there are two ways to implement the translation, either transform the pressure to volume or to frequency. The former will emphasize the rhythm of the music and the latter will emphasize the melody. Although the name of our concept is "Fitlody", however it might be more suitable to combine "rhythm" with "Fitness", instead of "melody."

The insights I got from the discussion.

We have a group meeting in Friday and decided what we are going to do for the next several days. Because we are going to give a presentation and bodystorm next Wednesday, we planned to make a video to present our design concept.

The first 30min we discuessed the concept we are going to use. Basically its the design idea I presented in week 2, but we thought its a little bit simple and we want to add some interactions to make it more interesting. Although the idea is about "Music" and "Fitness", but its core is "Data visualization", so we are thinking to make more use of the data collected from the sensor, We want to make the data not only presented as sounds, but also showed as visuals, like the visual effects in the early Windows XP music players.

We spent the next 30min talked about some more details of the video we are going to make. We decide to meet at Sunday, bring some instruments(both musical instruments and instruments for exercise), and try to use bodystorm to show how the user expected to interact with the product.

We participated in a soldering induction at the beginning of this week. It was a very interesting experience. I have took the fundamental of computer hardware basics courses, but I never think about how the very basic part of a computer is like. Although what we did in in Monday is quite simple---- a circut only include battery, switch, resistance and a LED light. But it gave me a total different experience, compare to using the A..d toolkit. It's like you are building up your own electronic from the very first step. Your blog posts require more detail, documenting the activities you did in class and reflecting on the and your design process. P.s. change your icon. 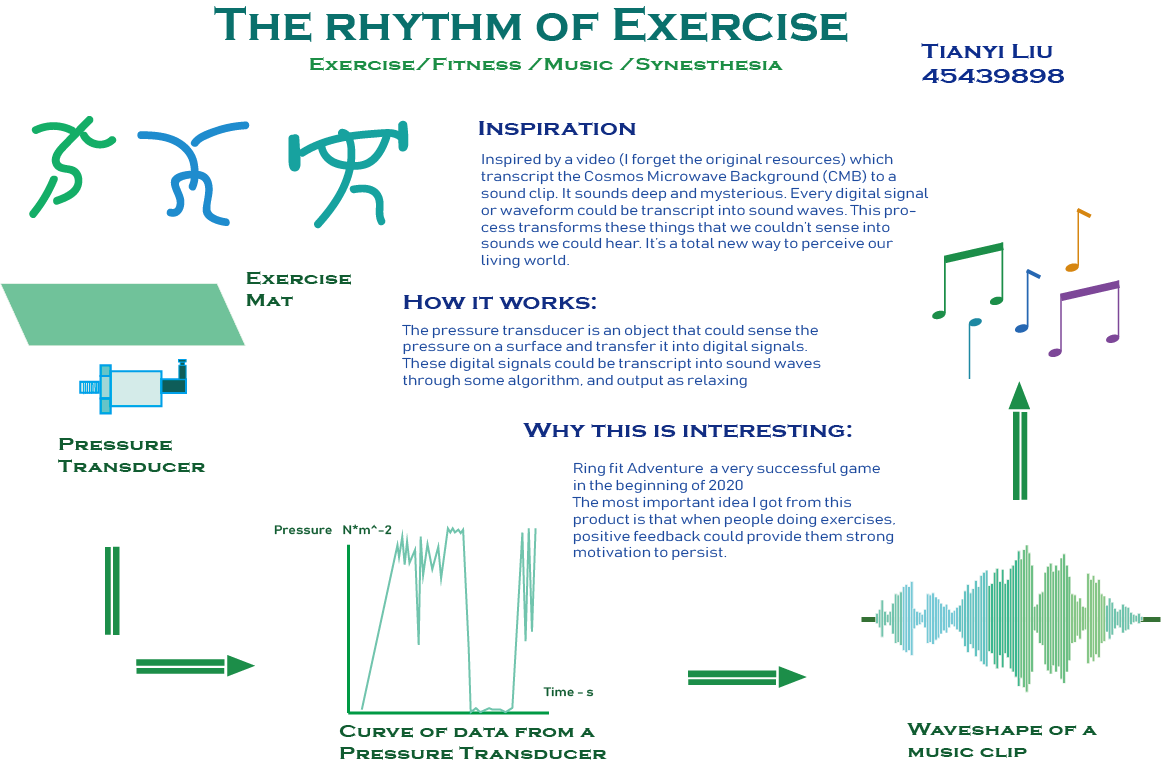 Inspired by a video (I forget the original resources) which transcript the Cosmos Microwave Background (CMB) to a sound clip. It sounds deep and mysterious. Every digital signal or waveform could be transcript into sound waves. This process transforms these things that we couldn’t sense into sounds we could hear. It’s a total new way to perceive our living world.

The pressure transducer is an object that could sense the pressure on a surface and transfer it into digital signals. These digital signals could be transcript into sound waves through some algorithm, and output as relaxing

Why this is interesting:

Ring fit Adventure, a very successful game in the beginning of 2020

The most important idea I got from this product is that when people doing exercises, positive feedback could provide them strong motivation to persist.

Fitness lovers, Childs (they love anything that could provide feedback), any people who are interested.

This could alternate or implemented with other fitness instruments in the outdoors. User could do exercises on the implementation after their works or studies.

I'm Tianyi, 4th semester of postgraduate students in Interaction Design. Just managed to get back to Brisbane after a 14 days self isolation in Bangkok. I have some experience in group working and development in HCI program from the coursese in the last few semesters, and I have confident that these experiences might help me to be a good teammate in the future group work.

It's the last and most important course in our study plan, which I considered as a final application of all the methods and theories we have learned in the last 3 sems. Because of the timetable clash with some exams, I didn't attend the exhibition last year therefore I'm not sure what kind of achievements we are expected to done at the end of the course, but I know things won't be done without hard efforts.